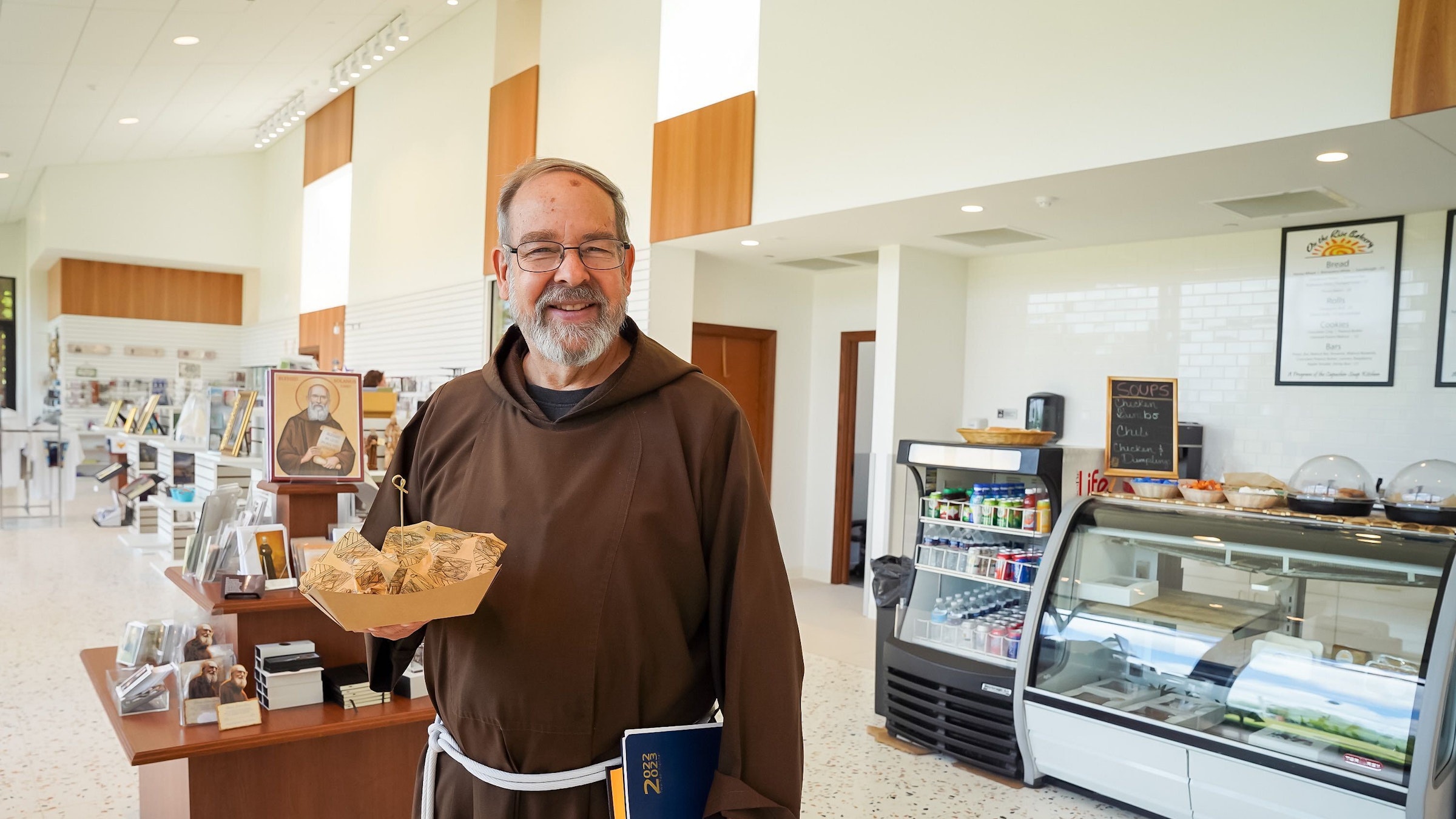 Fr. David Preuss, OFM Cap., grabs a quick bite to eat from the newly relocated On the Rise Bakery in the recently expanded Solanus Casey Center. The 5,000-square-foot expansion, which opened to the public June 9, includes the bakery, a gift shop and meeting and dining spaces, part of an overall plan to increase the center's hospitality in the spirit of Blessed Solanus Casey. (Valaurian Waller | Detroit Catholic)

Flow of the center is meant to lead pilgrims from faith to community, Capuchins say of new 5,000-square-foot addition

DETROIT — On the Rise Bakery has found a new location, one familiar to most Detroit-area Catholic pilgrims.

The Solanus Casey Center on Mount Elliott Street in Detroit announced the relocation of the Capuchin-run bakery on June 9, conveniently placed in the newly opened expansion of the center, giving pilgrims a chance to grab a cup of coffee or a pastry after visiting the tomb of Blessed Solanus Casey.

“In a concrete way it brings together two parts of Blessed Solanus Casey,” Fr. Gary Wegner, OFM Cap., executive director of the Capuchin Soup Kitchen, told Detroit Catholic. “He was known as one of the founders of the Capuchin Soup Kitchen; his tomb and the various efforts of the Solanus Casey Center to provide spiritual support to the people are well known. Now in the café, we are linking the two, the spiritual and the material support.” 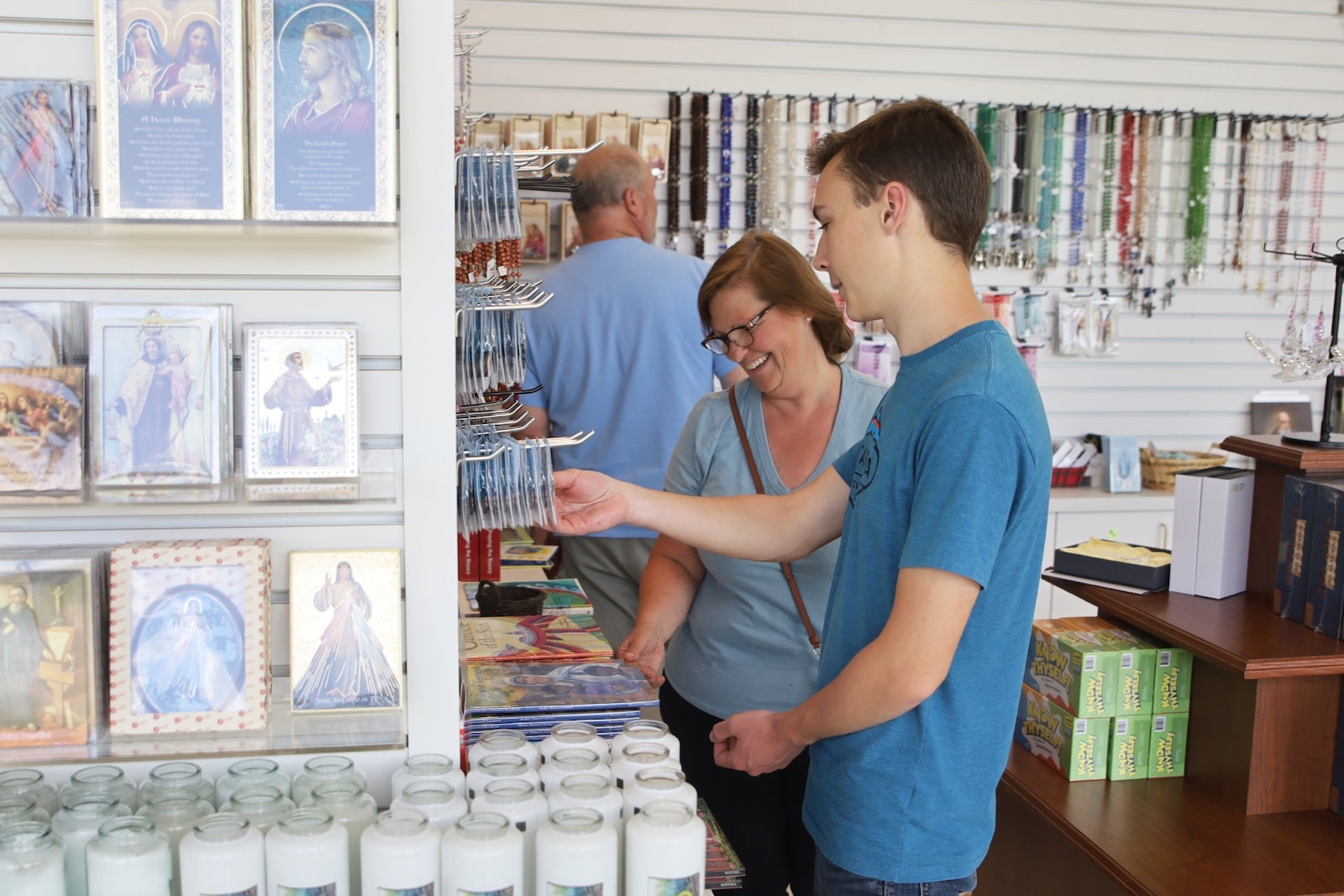 The 5,000-square-foot expansion of the Solanus Casey Center has been more than five years in the making, ever since the announcement of a $20 million gift from the A.A. Van Elslander Foundation, the philanthropic organization of late Art Van Furniture founder Art Van Elslander, who cited the Capuchins of St. Bonaventure Monastery as key features of his faith life.

“A lot of inspiration [for the expansion] came from Art Van Elslander, who was obviously the one who announced he was going to make this grant,” said Fr. Steven Kropp, OFM Cap., director of the Solanus Casey Center. “He really had a goal of trying to increase the hospitality we were able to offer people.”

Fr. Kropp said the Solanus Casey Center is still in the midst of outdoor improvements to make the center a truly spiritual retreat for pilgrims to escape the urban sprawl and enter into a space of contemplation and prayer, as the Van Elslander Foundation envisioned when they made the gift.

But the most prominent portion of the expansion so far involves the moving of On the Rise Bakery from its Gratiot Avenue location to the Solanus Casey Center.

Ever since On the Rise Bakery’s founding by Fr. Ray Stadmeyer, OFM Cap., the bakery has been a place for men who have been incarcerated to learn job skills to prepare for them for a career beyond the bakery and café. 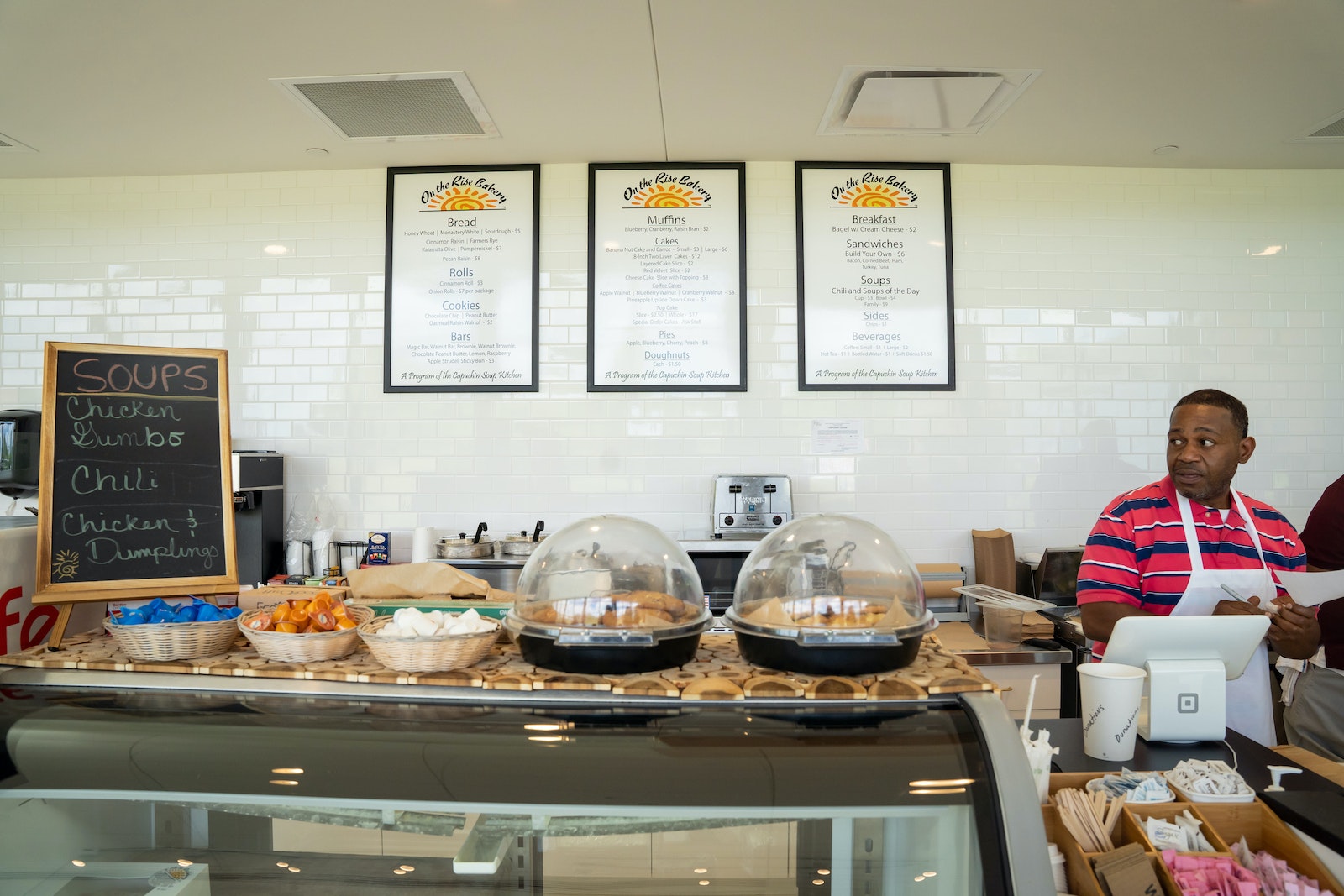 The heart of On the Rise Bakery is its ROPE program (Reaching Our Potential Everyday), which allows men who have been incarcerated to gain job skills while providing a service to the community. The bakery's new location will offer sandwiches, coffee and baked goods to pilgrims who visit the center. (Valaurian Waller | Detroit Catholic)

“For the men in the ROPE program (Reaching Our Potential Everyday) who are staffing the bakehouse and part of the café, this (move) provides more of a profit we make to the good of the guys working in the program,” Fr. Wegner said. “It’s contributing to something that’s closer to self-supporting than it was. I’m not sure if On the Rise will ever be self-supporting, I doubt that, but like anything, the more successful you are, the better you feel about what you are doing.”

Visitors who come to the Solanus Casey Center will notice the gift shop, which used to be to the right of the center's front doors, has been replaced by office space for the Capuchin ministries that operate throughout Detroit.

The gift shop is now located next to On the Rise, near the chapel and Blessed Solanus’ tomb.

“Visitors will see, once construction is completed, how the gift shop and café really reflect the flow of the center,” Fr. Kropp said. “People will see a new front desk, expanded to accommodate more of the visitors who are coming in. We’ll have meeting spaces made available for parishes and other organizations who are on retreat at the center and can meet in those rooms before continuing on to the rest of the center.”

With the addition of more seating space for pilgrims, the Capuchins are hoping the faithful who visit the center will incorporate more time for fellowship and community along with prayer at the center, just as Blessed Solanus, the porter of neighboring St. Bonaventure Monastery, had done for all those years.

“Solanus Casey was all about hospitality and gratitude,” Fr. Wegner said. “I think those are two of his primary virtues. He welcomed people, he was the porter. In that role, he provided sandwiches to those who had material needs. With the café, we’re providing sandwiches and coffee for those who come with a spiritual need but still need to eat something.” 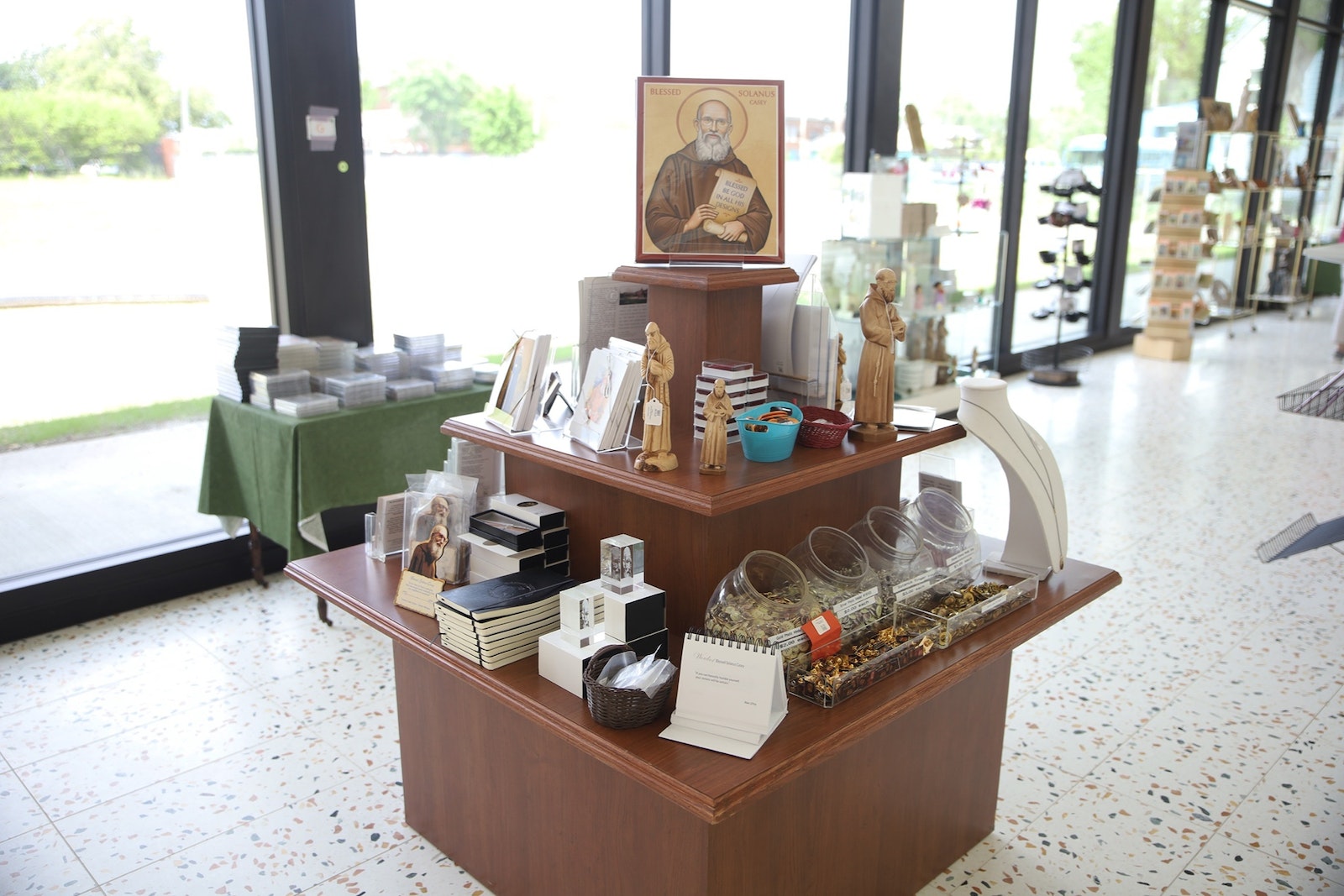 The center's new layout promotes a complete pilgrimage experience, Capuchin friars say. Visitors start by learning about the blessed friar before being led to his tomb and the St. Bonaventure chapel for Mass or adoration. After Mass, pilgrims can find hospitality and a place to gather in the new expansion, which includes the cafe, gift shop and soon a renovated outdoor garden area. (Steven Stechschulte | Special to Detroit Catholic)

The center’s redesign is meant to reflect a spiritual journey pilgrims are meant to undertake. After entering a room to learn more about Blessed Solanus, his love for the poor, his piety and his faith, pilgrims are led to his tomb and the chapel, which in turn leads to the Mass and the Eucharist, the pinnacle of Fr. Solanus’ service to the Church.

By putting the community gathering space at the end of the center, the Capuchins are communicating how gathering together and sharing in one’s fellowship is necessary after encountering the Lord through the Eucharist during Mass at the St. Bonaventure Chapel.

“The whole plan for that building was to unite the space of the gift shop and the café so it becomes this seamless space,” Fr. Kropp said. “You will have some time in prayer, maybe a tour, a Mass, confession, and you end up in that beautiful bright space where you end up in the gift shop, with something to eat and you enter into the gardens.

“The move is meant to unite those two spaces, the spiritual and the temporal, just as Solanus Casey did,” Fr. Kropp added.

For Fr. Wegner, moving On the Rise Bakery to the Mount Elliott center means giving the bakery greater visibility, allowing more pilgrims in the city to see the good the ministry is doing.