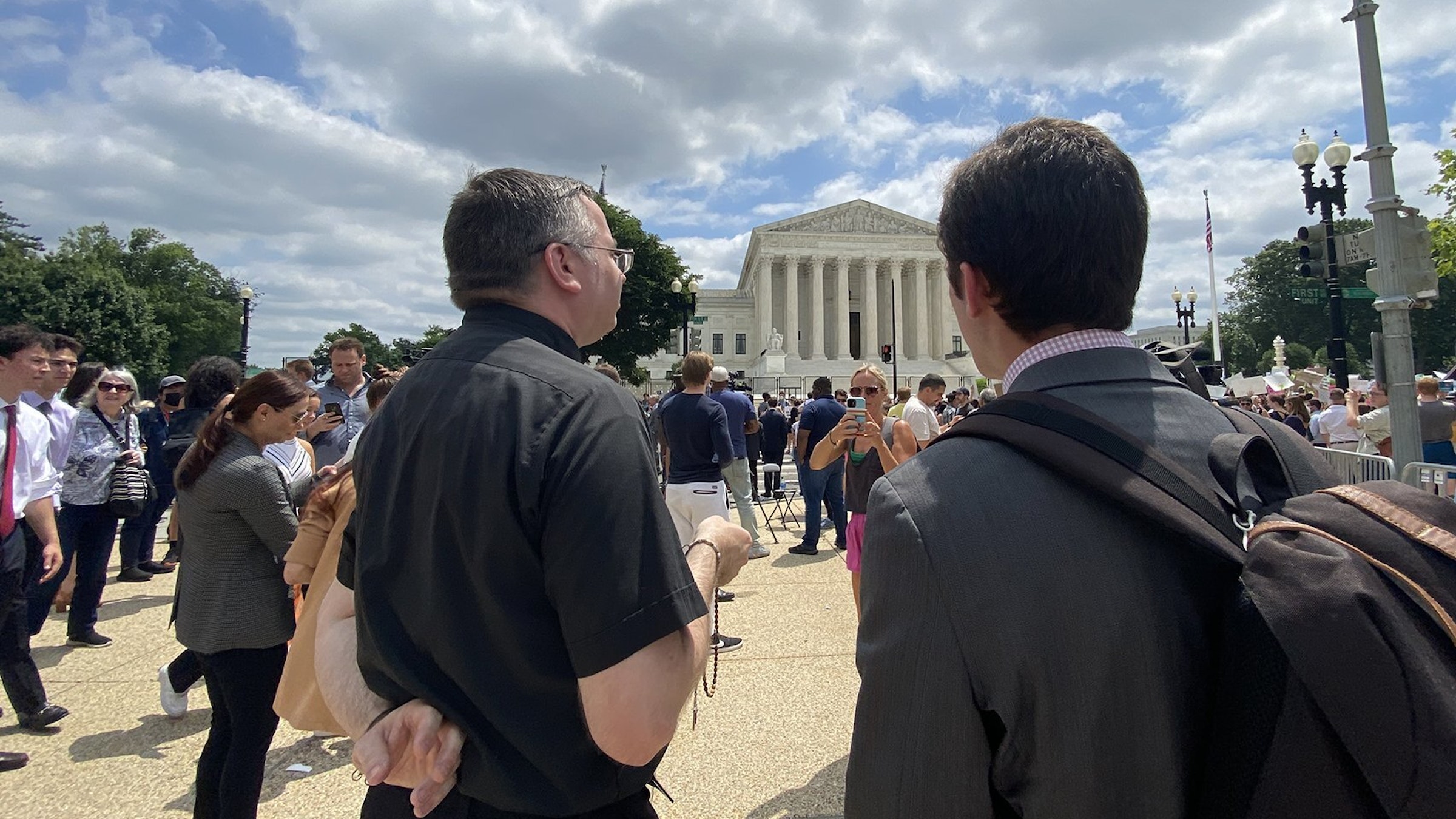 Fr. Tim Wezner, left, a priest of the Archdiocese of Detroit, prays the rosary near the Supreme Court in Washington June 24, 2022, after a majority of the justices overturned Roe v. Wade, the landmark decision that legalized abortion in the country. Father Wezner said he was there to pray in thanksgiving but also for peace during a tense time for the country. (CNS photo/Rhina Guidos)

WASHINGTON (CNS) -- Amid cries of defiance and jubilation, Fr. Tim Wezner stood out for his quiet prayer, holding a rosary and contemplating the crowd outside the Supreme Court of the United States June 24 after a majority of justices overturned a landmark decision that for almost 50 years made abortion legal across the land.

"Our Father who art in heaven," the priest prayed as the cluster of women in front the court yelled, "My choice!"

"I'm here to pray, for thanksgiving, but also for safety," Fr. Wezner, a priest of the Archdiocese of Detroit studying canon law at the Catholic University of America, told Catholic News Service referring to the high court's decision, announced moments earlier, to strike down the 1973 decision Roe v. Wade. "Obviously, this is a loaded issue. ... I'm not here to protest or to shout."

But nearby, those who were happy did shout -- some in jubilation and others to insult.

"You're no better than slaveowners of the Civil War!" a white man with a bullhorn shouted when members of Congress Maxine Waters and Al Green, both Black, walked by along with staffers and other politicians, mostly Democrats, close to the steps of the court, which had been fenced off.

"The hell with the Supreme Court, we will defy them," said Waters, a Democrat who represents California's 43rd Congressional District, which includes much of southern Los Angeles, and who is a staunch supporter of legal abortion.

Posted on fencing in front of the court were cutout cardboard figures mocking the court's justices who said in the day's ruling in Dobbs v. Jackson Women's Health Organization that the U.S. Constitution does not confer a right to abortion.

But to those like Savannah Craven, those justices, Samuel Alito, Clarence Thomas, Neil Gorsuch, Brett Kavanaugh and Amy Coney Barrett, and Chief Justice John Roberts (who joined them in the Dobbs but said he wouldn't have overturned Roe), they were the heroes of the day.

In Dobbs, which involved a Mississippi law banning abortion after 15 weeks, the court upheld the law 6-3. The vote to overturn Roe was 5-4; the court also overturned Casey v. Planned Parenthood, the 1992 decision that affirmed Roe.

"I was sure ... I knew this was going to happen," said an excited Craven, a Catholic who described herself as a Black conservative hip-hop artist.

She credited former President Donald Trump for appointing "pro-life justices" who would overturn Roe, and she was happy about it, she said.

"It’s a celebration," she said.

The former president's influence loomed large in some parts of the crowd. One group shouting, "Goodbye, Roe" wore "the pro-life generation votes" T-shirts with a color similar to the red that identified Trump's "Make America Great Again," or MAGA movement.

For Catholics like John Gehring, of Faith in Public Life, the ruling may expose a complicated relationship for church members who worked with a political movement that wanted to get rid of abortion but one that he said doesn't support other church teachings on social justice issues.

"Catholics on the right spent decades reducing church teaching to a single issue and linked arms with a conservative movement that is hostile to the church's teachings about a consistent ethic of life and the common good. This ruling is the culmination of that misguided campaign," he said.

It was something that Lydia Freehafer, who held a "You're not pro-life, you're pro-birth" sign near the high court's steps, criticized.

She said some hid under the mantle of Christianity to oppose abortion but also opposed social safety-net programs to help the poor obtain health care, adequate food and housing, and education, and they did so for political reasons.

"That's not Christianity," she said.

Abortion, on the other hand says, "You're not worthy" of life, Craven added.

For Catholics for Choice president Jamie L. Manson, the ruling showed, she said, that the court was "wildly out of touch with the views of most Americans and the beliefs of the majority of U.S. Catholics, who, polls consistently show, support legal abortion in all or most cases."

"On this terrible day we mourn, we grieve, we rage alongside all our fellow Americans who believe in the basic right of all people to determine their own sexual and reproductive futures. But we fight on. And we will not stop," Manson said.

Some like Micheal Smith, of Allentown, Pennsylvania, who was in the crowd, were still trying to figure out what exactly the ruling would mean, and said he was concerned, particularly for women who are raped. But his biggest concern for the day was the safety of all.

"I hope we can resolve this peacefully," he told CNS. "I hope nothing bad happens today."