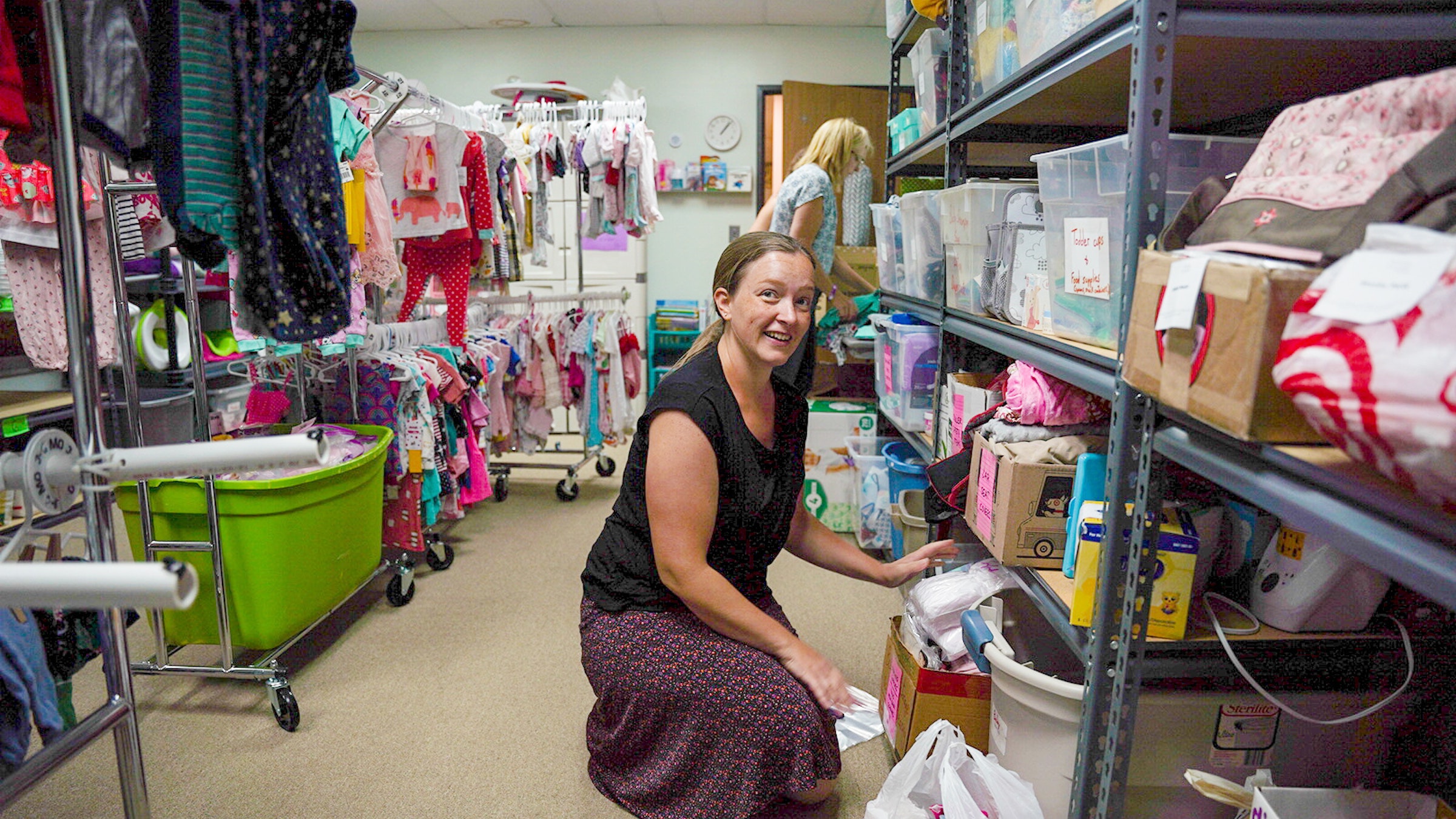 Maggie Mews, nurse manager for the Lennon Pregnancy Center in Dearborn Heights, puts away diapers in the center's baby closet July 21. A month after pro-abortion extremists smashed nearly a dozen windows and left threatening messages June 20, the center has received an outpouring of support from the community, including more than $20,000 in donations to help the center continue to serve vulnerable mothers and babies. (Valaurian Waller | Detroit Catholic)

After pro-abortion group trashed Dearborn Heights charity in June, local Catholics rally in support: 'We are a people of action'

DEARBORN HEIGHTS — When Mary Wilkerson drove past offensive signs in the front yard of a home in late June, she was angry. Not just because her children were in the car, but because the signs felt hateful to her. Evil. The vulgar signs included profanities toward God and objectionable language about women’s bodies as a way to show dissent after the Dobbs vs. Jackson Supreme Court decision.

Wilkerson remembered the words from Scripture: "Do not be overcome by evil, but overcome evil with good" (Romans 12:21).

She and her husband, Aaron, discussed what they could do with their anger: pray outside the family’s home, organize a prayer rally in the neighborhood, or something else entirely.

Wilkerson recalled a recent social media post from her friend, Erin Bauer, who works at the Lennon Pregnancy Center in Dearborn Heights. After the center was vandalized June 20, Bauer wrote about what happened — windows smashed, graffiti — and about the good things the center did to help 97 women and children in the month of June alone: diapers distributed, food provided, emotional and educational support given. She vowed to continue to help women despite the setback.

Vandals broke windows at the center, as well as glass on the front door. They spray-painted a message: “If abortion isn’t safe, neither are you,” a hallmark of the pro-abortion group, Jane’s Revenge. The Knights of Columbus and parishioners from nearby parishes helped clean up so the center could re-open after two days. The FBI is assisting Dearborn Heights Police with the investigation. 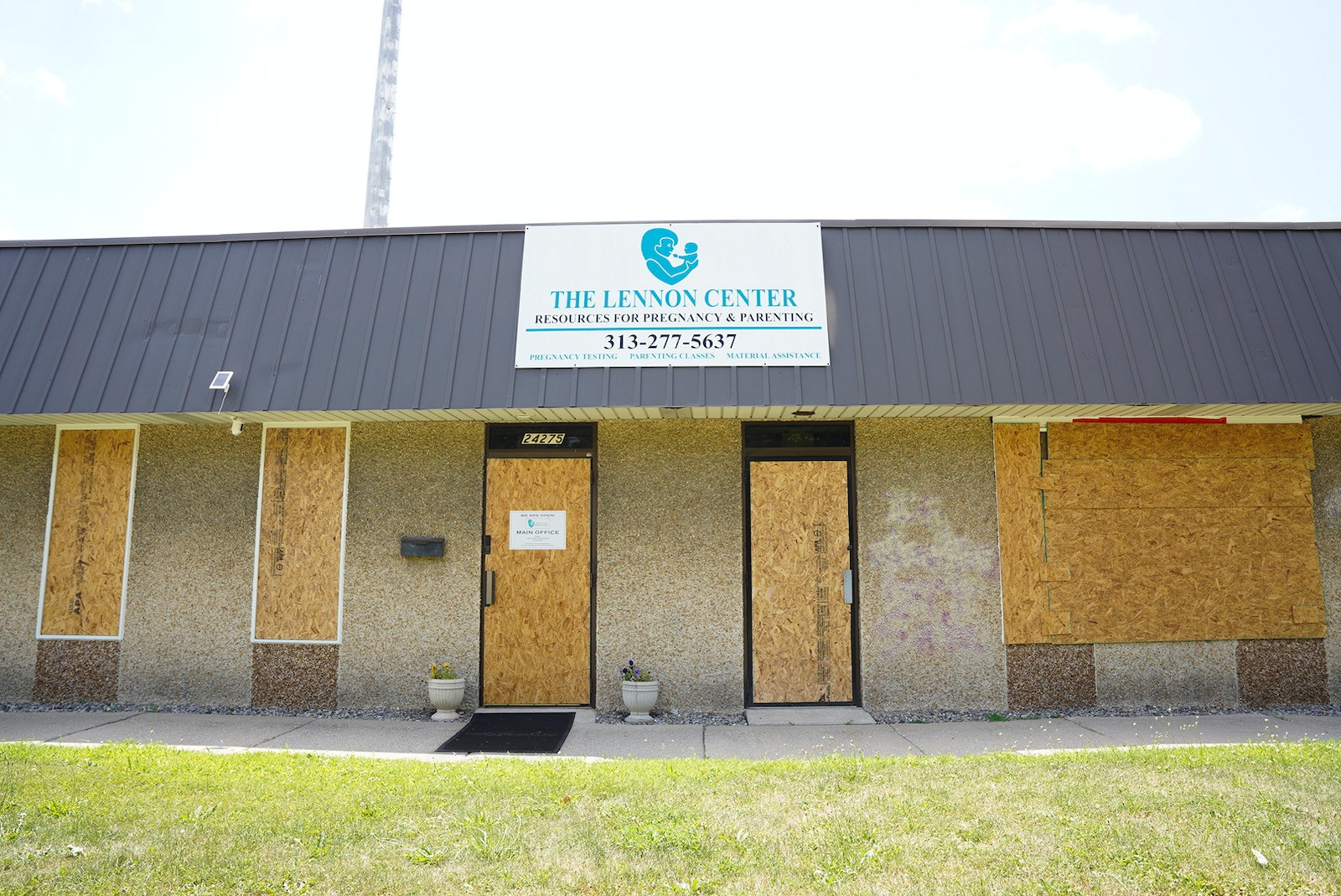 The windows and doors of the Lennon Pregnancy Center in Dearborn Heights have been boarded up since the June 20 attack, during which vandals left a message reading, "If abortion isn't safe, neither are you."

Bauer, who is a member of the center's office staff, felt hated and alone when she first heard about the attack. She also felt convicted.

In her June 20 post, which included photos of the damaged building, she wrote, “If you’ll notice on the first picture the first word on our sign is FREE. EVERYTHING we do at the Lennon Center is free. We hold parenting classes, offer ultrasounds to women who can’t afford them, we give out material assistance to women who may not have the means to feed and diaper their children. In the middle of a formula crisis, we are handing out multiple cans of formula each day. We are pro-life, yes. But we are Pro-Woman. We are Pro-Child. We service women who come to us, who need our help.”

The post went on to say, “We aren’t giving up. And we will not let a few cowards coming in under the guise of being pro woman stop our work that actually IS pro woman. Tomorrow we will hold our classes (virtually) and we will fill boxes and bags to make sure children don’t go hungry and have clothing and diapers.”

With her friend’s post in mind, Wilkerson — who has more than 2,000 followers on Instagram — took to her keyboard and shared that she and her husband decided to donate to the Lennon Center as a way to overcome the evil. She invited others to join her. Overnight, $2,860 had been donated. 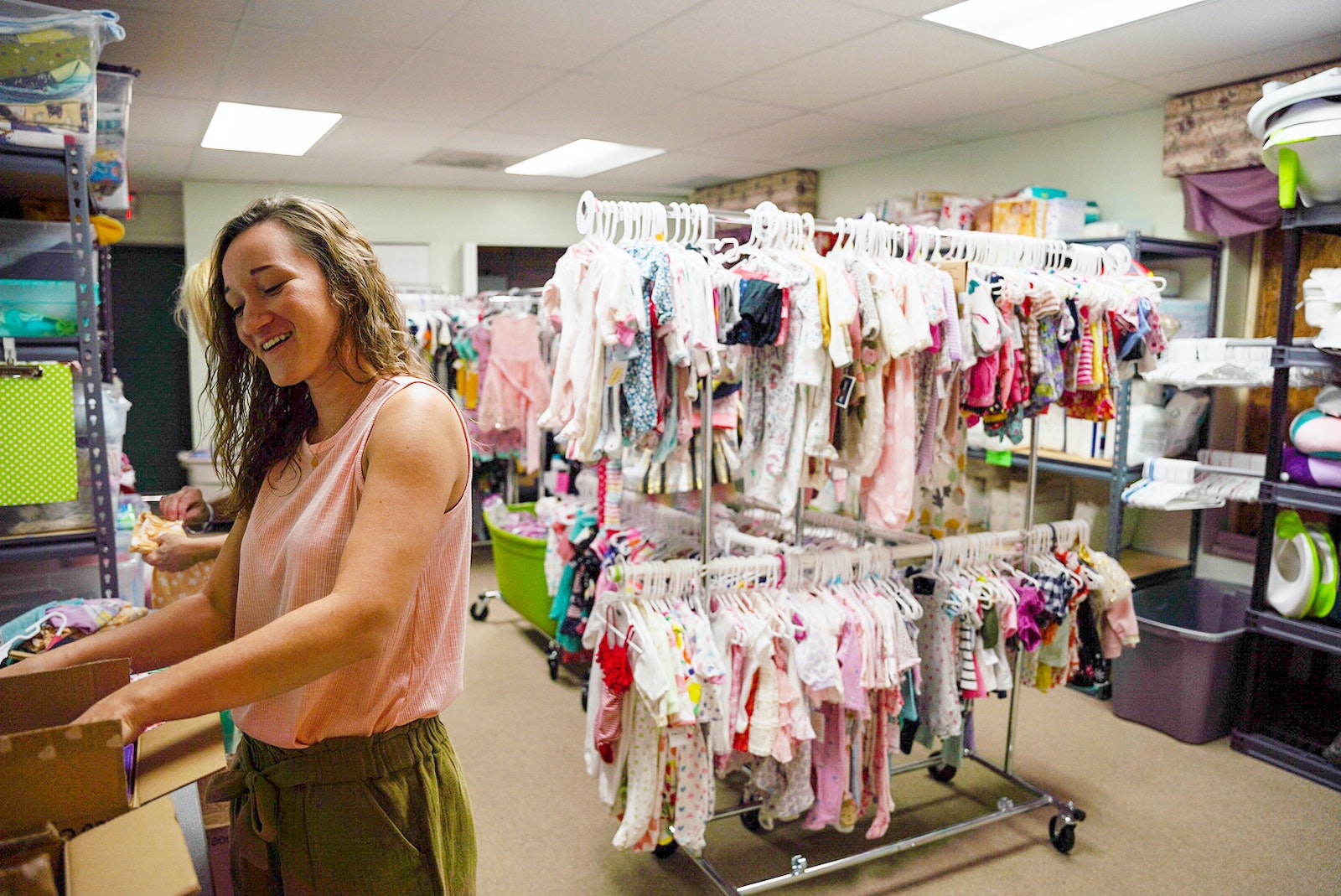 Emily Fitzgerald, a parishioner at St. Thecla Parish in Clinton Township, helps out in the Lennon Pregnancy Center's clothing closet July 21. Fitzgerald has been volunteering at the center for almost a year, and wasn't deterred by the June 20 attack.

Many of the 150-plus donors were from southeast Michigan, but some were not.

Francine Shammami knew Wilkerson as a campus minister at Mercy High School. Even though she now lives in Seattle, she was inspired to contribute.

“I donated because I believe in putting my resources behind the causes I support,” Shammami said. “Pregnancy is stressful enough when planned, and with all the resources one needs. This is one way I can accompany those who don’t have the resources they need to support their families.”

Another donor from Jacksonville, Fla., who attended college with Wilkerson, was on vacation with her family when she saw Wilkerson’s post.

“My husband, Scott and I are very intentional with our charity,” said Barbara Fryman. “We commit to helping a pregnancy center locally, and I thought maybe we should simply keep it local. As I considered it, I asked Scott if we could be a little radical, his response was immediately affirmative.”

Mariann Bolton, executive director for the Lennon Center, learned about the unexpected $20,000 in donations while in Spain for her son’s wedding.

“When the others at the center called to tell me, I thought it was a joke at first. I couldn’t believe it,” Bolton said. “It was so exciting to see the number (of donations) going up every time (Wilkerson) posted a new total. I think what I’ve learned from all of this is that there are so many good people out there. We can’t thank them enough.”

Though Wilkerson raised money for the center, she insists Bauer was the catalyst for her fundraising.

“Honestly, I feel like this is the story of two best friends,” Bauer said. “Yes, I wrote something on social media but then she became the voice of it. I was in touch with her as more and more people donated. People respond to her because she’s really relatable and approachable. She speaks truth but does it with humor and generosity.” 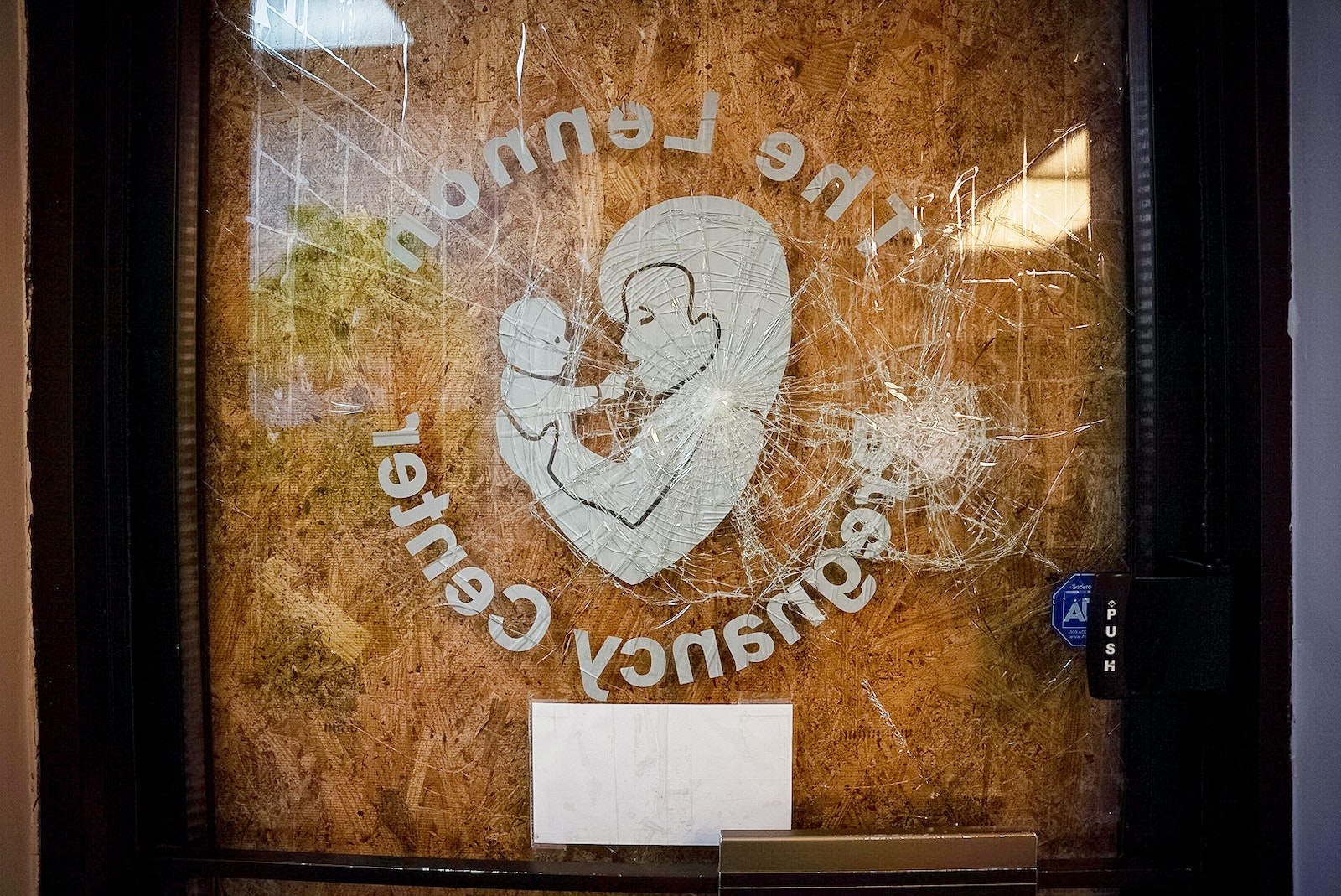 The front door of the Lennon Center remains smashed, but that hasn't deterred the work of the pregnancy center's volunteers, who continue to provide vital services for vulrenable women and babies in the community.

Wilkerson encourages others to listen to the promptings of the Holy Spirit to ask where God is calling them within their own circumstance and gifts.

“Look for opportunities right in front of you,” Wilkerson said. “We’re all called in different ways. For the mom who is exhausted but loving her babies as she goes to the grocery store, that alone is a profound witness of life.”

As for the lessons learned through the whirlwind fundraising campaign, Wilkerson has gleaned a few. She goes back to St. Paul’s words in Romans 12:21.

“It was amazing to see that Scripture verse so plainly laid out — not to be overcome by evil but to overcome evil with good,” she said. ”We are a people of action. We don’t need to get stuck in the weeds of ugliness in the world. We don’t need to do the back and forth. Instead, we can move forward in our call as joyful, missionary disciples to do good. It doesn’t take away the ugly, but it certainly gives a profound witness of something different to the world. It’s a witness that the world desperately needs. If we’re focused on overcoming evil with good, people will come along with us.”

Bauer has held the Scripture verse close to her heart as she carries on her work at the center.

“If we’re willing to open ourselves up and not be afraid, we have no idea what the Lord will do with that,” Bauer said. “He might say, ‘I’m not giving you a thousand dollars, I’m giving you twenty thousand.’”

To donate to the Lennon Pregnancy Center, visit www.lennoncenter.org, or contact a pregnancy center in your area to help.