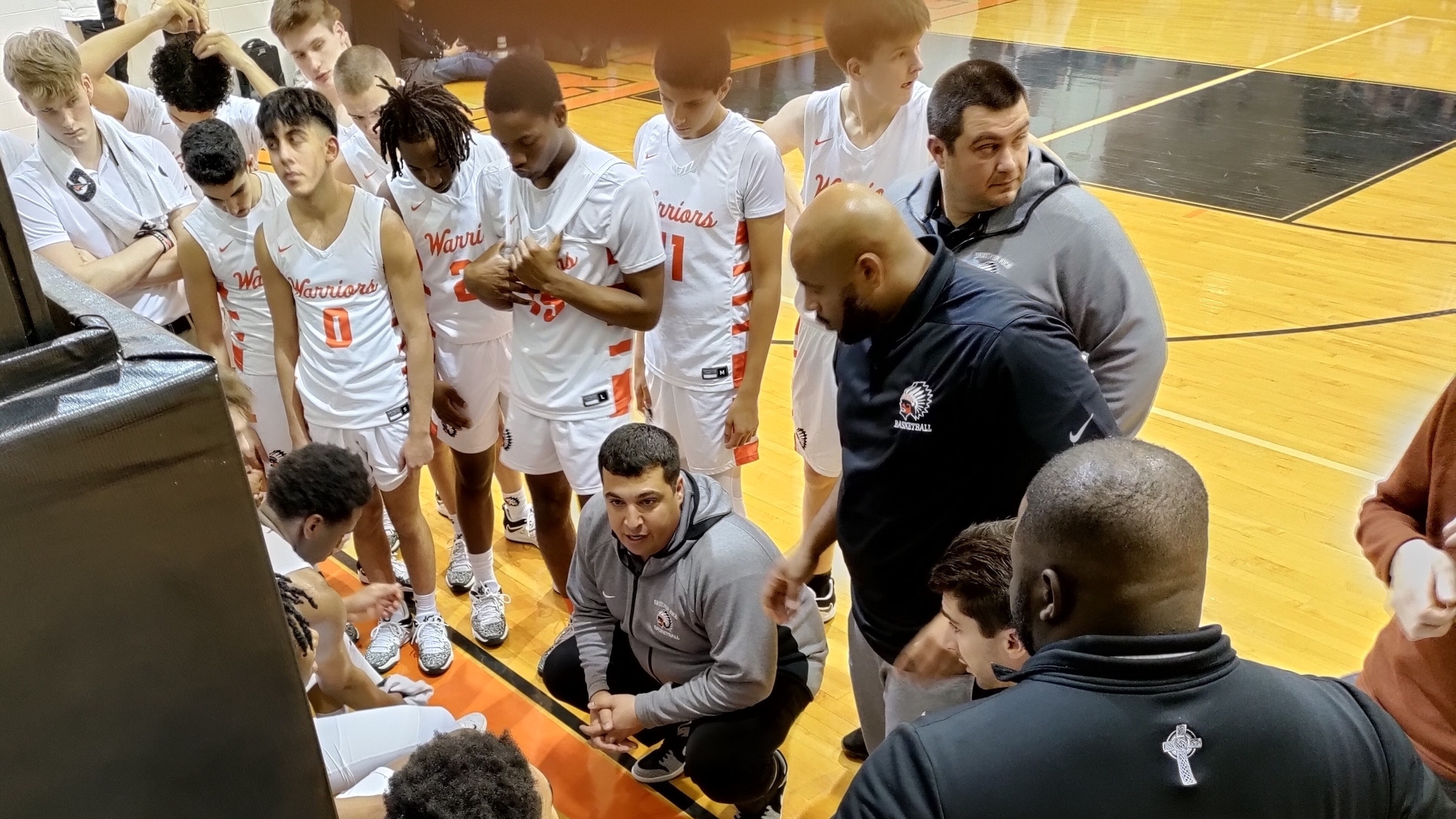 Brother Rice coach Rick Palmer called the loss to De La Salle an embarrassment. “I’m not happy with how we played and not happy how we coached. It was a team loss. We’ll bear it together,” he said. (Photo by Don Horkey | Special to Detroit Catholic)

BLOOMFIELD HILLS — The Catholic League’s boys Central Division appears to be on the verge of another season of basketball pandemonium much like it experienced a year ago when teams knocked one another around in a struggle for survival to play another night.

Last Friday evening, against a backdrop of his players exuberantly celebrating a hard-fought 38-34 victory over Brother Rice, Warren De La Salle coach Gjon Djokaj said, “You can’t live in the past. It’ll come back and bite you in the butt. You’ve gotta move on.”

Well, there’s something going round. Whatever it is bit Brother Rice, coming into the game with a perfect 7-0 pre-season record and ranked No. 1 on most everyone’s list to succeed De La Salle (6-2), the defending Division 1 champion.

It gets even weirder. At about the same time, about a half-hour west at Orchard Lake, St. Mary’s and University of Detroit Jesuit tangled in overtime in a game that tipped off Friday evening but didn’t finish until Saturday morning.

The Warriors built a 20-13 halftime lead.

“Late in the first quarter and second quarter,” Djokaj said, “they got out and had a few transition points. There’re so deadly when they get out and run. We had to get hold of the tempo.”

Within the first four minutes of the third quarter, the Pilots tied the game 20-20 and its defense clamped down on Rice’s offense, limiting the frustrated Warriors to a paltry four points.

Michael Sulaka had 8 points and Smith 7, despite sitting out the third quarter with a sprained ankle.

“It was a grind-out game, something we’ve done all season long,” Djokaj said. “We finally showed up. We had four of our best days of practice and it carried over into the game.”

Brother Rice’s vaunted senior trio of Division 1 players — Curtis Williams (committed to Louisville), Xavier Thomas (Toledo) and Johnathan Blackwell (Wisconsin) — combined for 21 points in sharp contrast to the 115 they scored in the Warriors’ three games coming into this one.

“When you don’t play well and execute well, it doesn’t matter how much talent you have,” coach Rick Palmer said. “It was embarrassing. I’m not happy with how we played and not happy how we coached. It was a team loss. We’ll bear it together.”

St. Mary’s led 34-27 at the half, but the Cubs rallied to take the third quarter lead, 47-44. With 4:22 remaining to play in the fourth quarter, and the Eaglets ahead, 52-47, the game was suspended due to slick floor conditions.

What one coach called “the perfect storm,” the increasingly cold, humid conditions outside and the rising temperatures inside the packed gymnasium produced enough condensation on the floor that St. Mary’s personnel had to wipe and mop the floor multiple times.

“It was warm,” said Cubs coach Pat Donnelly. “I get very animated and I sweat a little bit, but I’m dripping right now.”

Both coaches and officials agreed on the decision to suspend play and resume at 10 the next morning.

U of D’s Sonny Wilson hit a triple to tie the game at 57-57 and send it into a 4-minute overtime. St. Mary’s sophomore Sharod Barnes sank six consecutive free throws to give the Eaglets a 67-64 victory.

Wilson and St. Mary’s sophomore sensation Trey McKenny put on a scoring exhibition. McKenny had 37 points — 34 before the disruption — and Wilson 26.