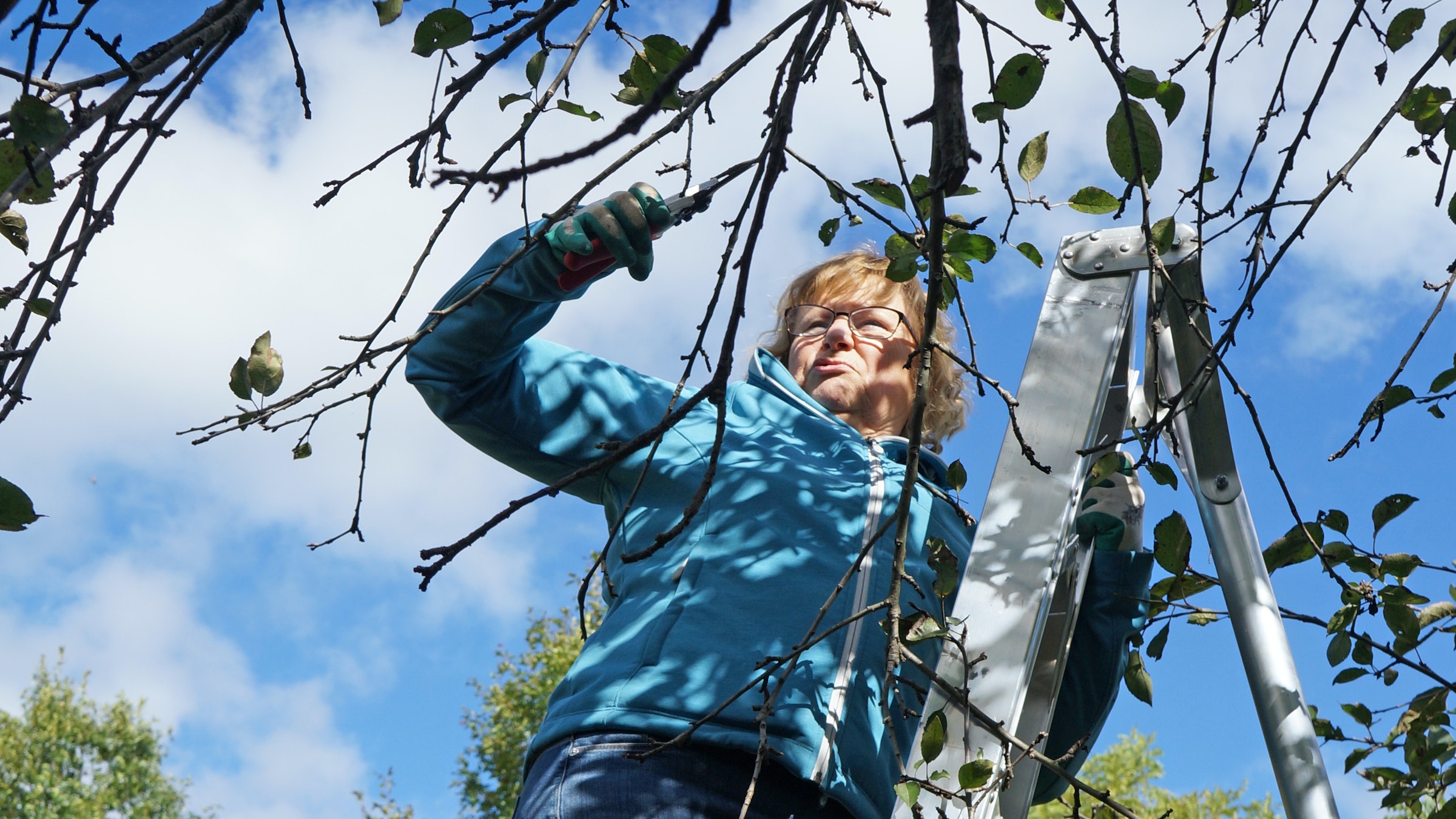 Regina Newlin, a master gardener and parishioner at SS. John and Paul Parish in Washington Township, prunes an apple tree in an orchard on the church's grounds in early October. Newlin leads a group of 8-10 volunteers who have been dedicated to saving the old orchard, which provides much-needed food for area food pantries. (Photos by Janet Sugameli Biondo | Special to Detroit Catholic)

Effort to save aging grove of trees has paid dividends for area's poor, SS. John and Paul parishioners say

WASHINGTON TOWNSHIP — More than nine years ago, parishioners at SS. John and Paul Parish in Washington Township made a surprising — and delicious — discovery when they found 55 abandoned apple trees growing on the church grounds.

Since then, a dedicated group of volunteers has dedicated their free time to cultivating the orchard as a source of food for the community's poor and hungry.

Volunteers and master gardeners began harvesting the trees in 2011, and since then, more than 2,100 pounds of apples have been donated to local organizations helping those in need, including Samaritan House in Washington Township and the Agape Center in Romeo. Last year, the parish donated 390 pounds of apples — 140 pounds of which came from one tree alone.

The organizations “are thrilled to get (the apples) donated because no one gives them apples,” said Regina Newlin, a parishioner and master gardener who has spearheaded the effort.

Though SS. John and Paul Parish was established in 1980, the orchard wasn't discovered until 2000, when the adjacent property was purchased for the potential expansion of the church.

A decade later, Newlin said, parishioners met to discuss the idea of starting a community garden when someone mentioned the possibility of saving the old grove of trees, which had largely been forgotten.

“So we asked if it was OK to take care of the apples,” Newlin said.

Saving the trees was going to be challenge, as wild grass and brush were already choking out much of the orchard.

“The first thing we did was put a path into the woods.” Newlin explained.

Newlin and her husband, David, who is also an advanced master gardener and a beekeeper, jumped into action, recruiting fellow parishioners and other master gardeners to become involved in the project.

Victoria Crooks, a master gardener and member of St. Peter Parish in Mount Clemens, said she enjoys donating her time to bring the apple trees back to life.

“When we first arrived, we had to come in with saws to get to the trees,” said Crooks, one of about 8-10 regular volunteers who work to keep the orchard in shape.

Today, there are 55 trees, which Newlin believes are McIntosh. It is nearly a year-round effort to clear the brush and prune the trees, beginning in February.

Because the trees are so old, it takes a lot of work to keep the orchard functioning and producing fruit, Newlin said. Given the age of the orchard, there are no plans to plant new trees.

“These trees were neglected for so long; they have a lot of dead on them,”  Newlin said. “These trees are very old. They were planted in the 1960s. The lifespan is 40 to 60 years, so some of them are dying, but we are doing our best to keep them alive.”

Also important to the long-term plan was the addition of beehives to help pollinate the trees. In recent years, two beehives have been installed in the area to boost pollination.

Samaritan House serves about 165 families a month, which is about 500 people between 23 Mile and 38 Mile roads between Omo and Dequindre.

Last year, church volunteers were also able to donate some apples to the Agape Center in Romeo, an emergency assistance food pantry operated by parishes in the North Macomb Vicariate.

Unfortunately, the 2019 harvest was a bit disappointing, yielding only eight apples.

“It’s not uncommon to have a good yield one year and not have much the next,” Newlin explained.

But the groundwork started this year with the help of two grants might produce greater yields next fall.

Thanks to a $400 grant from the Four County Community Foundation, and a $150 grant from the Macomb County Master Gardener Association, the church group was able to purchase another orchard ladder, brush cutter and pruning sheers.

Micaela Boomer, program officer for the Four County Community Foundation, said the organization was happy to donate to the church group after learning of its mission to help the hungry.

The foundation, which is not religiously affiliated, serves Lapeer, St. Clair, Macomb and Oakland counties, providing grants and scholarships in the local community that was once served by the former Community Hospital in Almont.

“We can work together to help and give back to our community,” Boomer said.

For Crooks, one of the volunteers, giving back by keeping the old orchard alive is just part of what it means to be a Catholic.

“It’s beautiful, even in the wintertime,” Crooks said. “It’s like a valley in here, and it doesn’t get very cold.”

Newlin added there is comfort and peace in the quiet of the woods during the cold months.

“I love it here for so many different reasons,” Newlin said. “It’s so close to the church and I feel close to God. It’s peaceful. It's filled with nature and native plants. I love doing this, and I love coming out here in the winter to prune.”