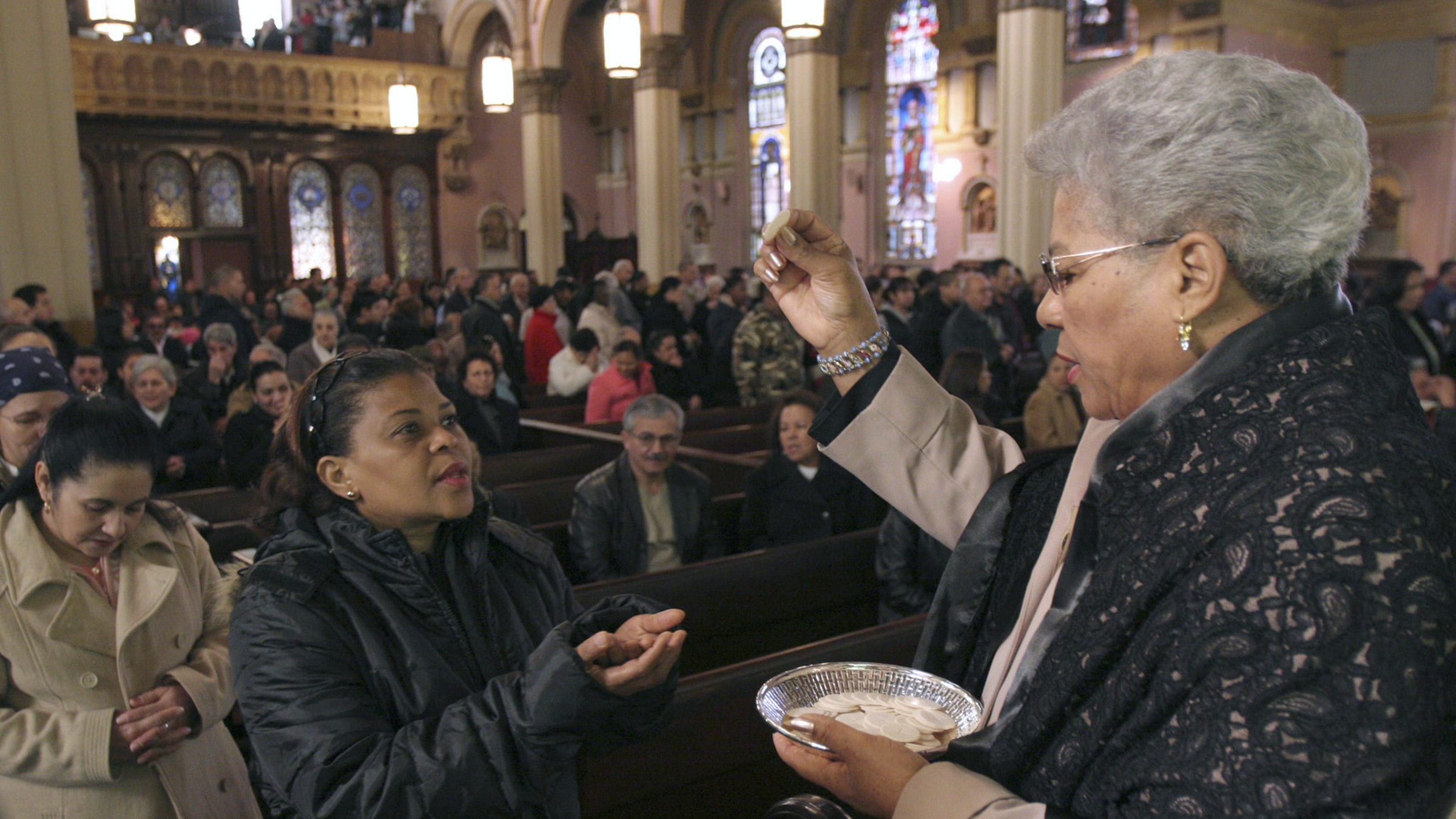 An extraordinary minister of holy Communion in Brooklyn, N.Y., distributes the Eucharist during Mass in this 2008 file photo. A new Pew study about the level of Catholic belief in the real presence of Jesus in the Eucharist showed that a majority of Catholics do not believe that the bread and wine used at Mass become the body and blood of Christ. (CNS photo/Gregory A. Shemitz)

WASHINGTON (CNS) -- A new study about the level of Catholic belief in the real presence of Jesus in the Eucharist showed that a majority of Catholics do not believe that the bread and wine used at Mass become the body and blood of Christ.

The report drew a strong rebuke from Auxiliary Bishop Robert E. Barron of Los Angeles, who posted Aug. 6 on Twitter: "It's hard to describe how angry I feel after reading what the latest @pewresearch study reveals about understanding of the Eucharist among Catholics. This should be a wake-up call to all of us in the Church."

In a video that accompanied the post, Bishop Barron's anger is not directed at Pew, but inward. "I'm blaming myself, bishops, priests and anybody" responsible for transmitting the faith, he said. "We're all guilty."

He added, "It's been a massive failure of the church carrying on its own tradition."

The Pew study, issued Aug. 5, showed that 69% of all self-identified Catholics said they believed the bread and wine used at Mass are not Jesus, but instead "symbols of the body and blood of Jesus Christ." The other 31% believed in the real presence of Jesus in the Eucharist, known as transubstantiation.

"Still, one in five Catholics -- 22% -- reject the idea of transubstantiation, even though they know about the church's teaching," Smith said.

Bishop Barron sounded astounded by the findings. "Any Catholic worth his or her salt knows this is a central teaching," he said in the video. "It's a basic tenet of Catholicism."

He said some are bound to react, "Oh, well, who cares? As long as they're committed to the poor, or committed to social justice. Isn't that important?" But Bishop Barron called that "a reduction of religion to morality, which is repugnant to Catholicism."

He cited a list of saints and holy people -- among them Dorothy Day, St. Katharine Drexel, Jacques Maritain and St. Vincent de Paul -- whom he said had "a profound understanding and love for the Eucharist, and said if someone asked them, "Isn't the Eucharist a nice symbol of Jesus?", "you'd have open rebellion."

"You take away the central teachings of our church at the doctrinal level, and trust me, you will take away our commitment to the poor," Bishop Barron said. "It belongs together as a whole."