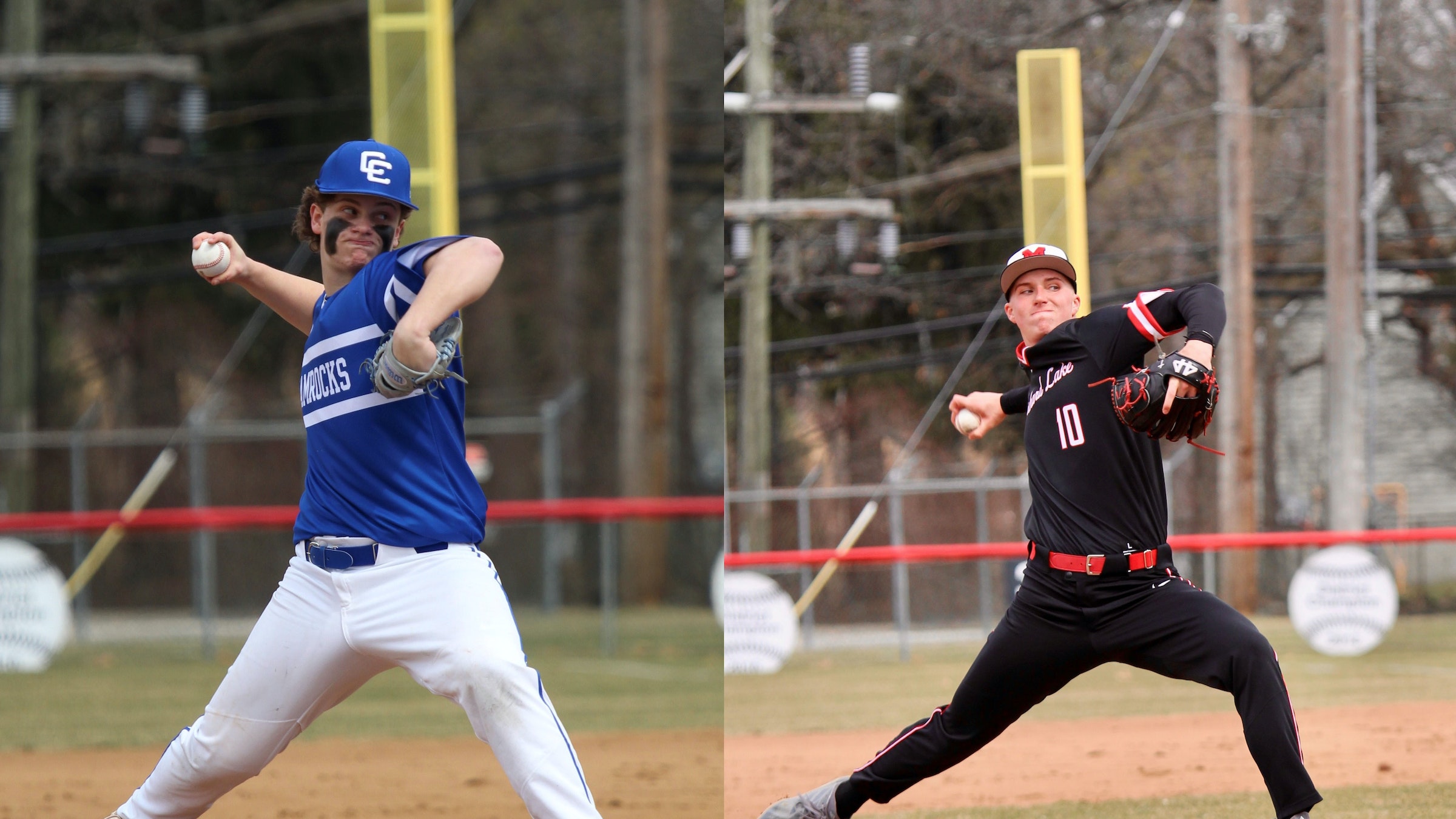 Catholic Central's Braylon Laroo (left) and St. Mary's Brock Porter (right) went head-to-head in a four-inning pitchers' duel last Saturday at Orchard Lake. Laroo throwing for the first time in a year after recovering from an elbow injury kept the Eaglets off the scoreboard until he gave up a lead-off homer in the fifth inning. Porter no-hit the Shamrocks with his arsenal of sizzling fastballs, striking out nine batters. (Photos courtesy of Stephanie Laroo)

ORCHARD LAKE – The baseball saga of St. Mary’s Prep is well-known in Michigan and even beyond its borders. The Eaglets won back-to-back Division 2 state championships in 2019 and 2021 leap-frogging over COVID-cancelled 2020.

Last spring’s squad was declared No. 1 in America by Collegiate Baseball publication and USA Today.

Coach Matt Petry has been quoted “the script (for 2022) is unwritten. Everyone on this club is ready to write the next chapter.”

Well, it appears the Eaglets – ranked No. 1 in a pre-season poll by the state’s high school baseball coaches association ─ have another best seller coming. Three games into the new season, the boys are picking up where they left off, outscoring opponents 47-7 and outhitting opponents 42-6.

The national pastime may have to be renamed “bashball.” Eight different Eaglets have smacked 15 home runs, led by senior Ike Irish with five (a pair against Shrine; three vs. CC; accounting for 11 RBI).

Before St. Mary’s erupted in the fifth and sixth innings of the opener and continued the onslaught into the second game, the 300-plus spectators were treated to a duel between Potter and Shamrocks sophomore Braylon Laroo.

Both have interesting backgrounds. Porter, a Clemson commit, throws a fastball in the upper 90s and has Major League scouts designating him as a high-round pick in June’s draft.

After striking out five of the first six batters he faced on fast balls ranging between 94 and 98 miles per hour, Porter walked the bases full in the third inning. He got out of the jam and a potential CC threat when catcher Ike Irish picked off a runner who had strayed too far from second base.

Laroo was pitching for the first time since the third game a year ago when he suffered a Tommy John-like injury to his right elbow (thankfully surgery not required) and underwent months of intensive rehabilitation.

St. Mary’s had runners in scoring position in the first, second and fourth innings but couldn’t solve Laroo’s mixture of fast balls and offspeed breaking pitches. He was pulled in the top of the fifth when the Eaglets centerfielder Jake Dresselhouse led off with a home run to center field.

The two teams were engaged in a rare baseball oddity last Saturday. Liggett won the first game, 14-0, on a no-hitter by Kurt Barr, and Rice took the second game, 2-0, behind a no-hitter by Alfredo Velazquez.

St. Mary’s travels to Liggett Saturday, April 9, for a doubleheader starting at 11 a.m. and then to Brother Rice the following Tuesday for a twinbill beginning at 4 p.m.

Porter is one of six senior Eaglets who have made Division 1 commitments. Irish will be heading to Auburn, pitcher Ciara Caughey to Kent State, third baseman Jack Crighton and outfielder Nolan Schubart to Michigan and Dresselhouse to Michigan State. Junior shortstop Jason Oliver has committed to Michigan.

Going back to the middle of 2019 and adding in the three wins so far this year, the Eaglets are working on a 73-1 record. The only smudge is a 2-1 loss to Saline last year.