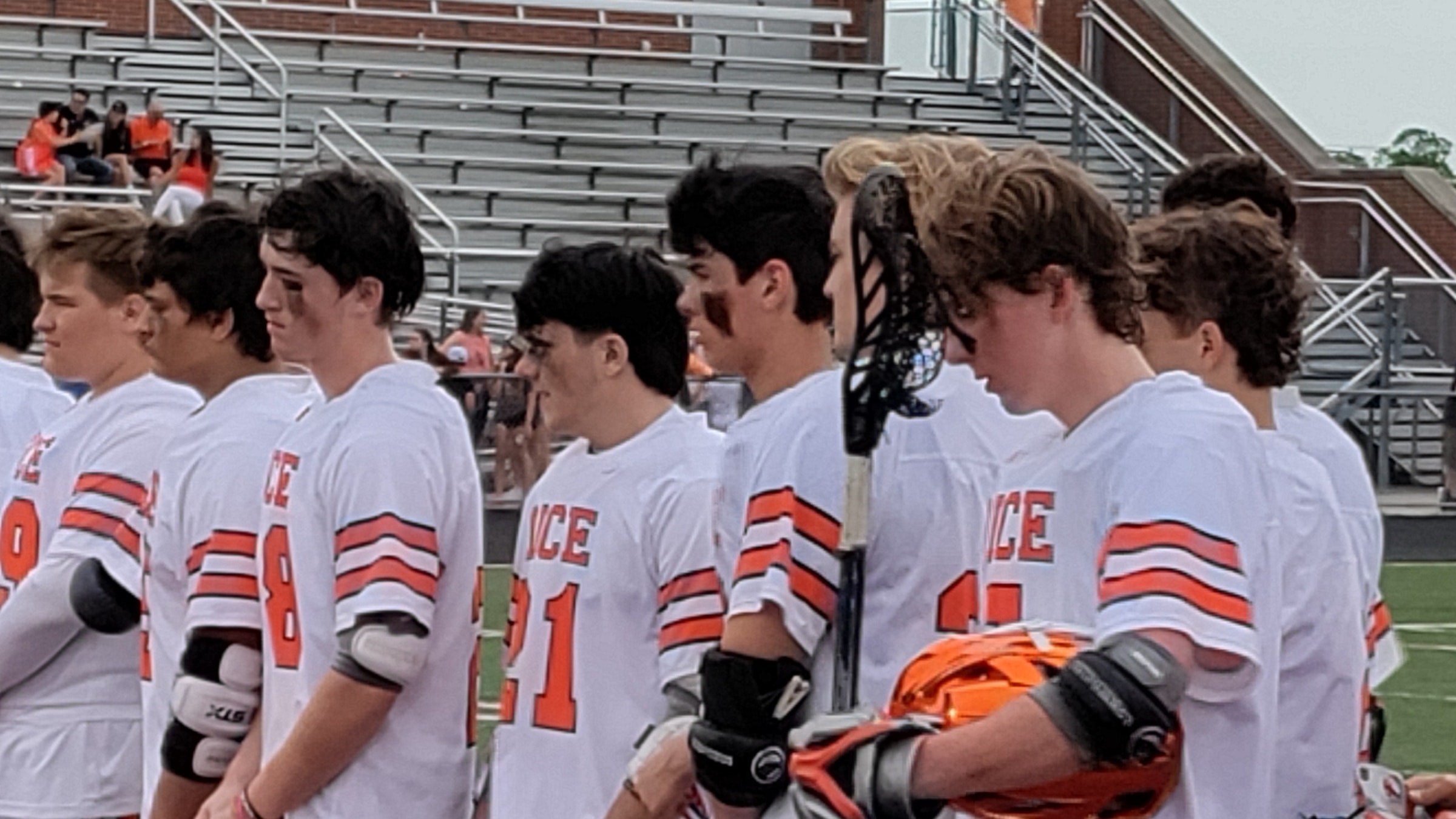 While his teammates watch Hartland collect the spoils for its lacrosse state championship victory over Brother Rice, senior defenseman William Donaldson mulls over the agony of defeat in his last game as a Warrior. (Photo by Don Horkey | Special to Detroit Catholic)

HOWELL — “We played catch-up all game,” said a disappointed Ajay Chawla witnessing the spoils of the MHSAA Division 1 boys lacrosse state championship being handed out at midfield.

It was a scene rarely played for his Bloomfield Hills Brother Rice Warriors, who dominated the sport since it was sanctioned in 2005, winning the first 13 titles in a row through 2017, then in 2019 and 2021.

Their Catholic League archrival, Novi Detroit Catholic Central, snapped the streak, 11-10, in 2018. The pandemic wiped out the 2020 season.

Ironically, that was the score on this mild spring Saturday afternoon at Parker Middle School Stadium, Hartland making the agony of defeat all the more bitter in overtime.

Brother Rice had defeated Hartland the last two times they faced one another: 14-9 in last year’s championship game and 15-11 back on March 25 in this season’s opener.

The Eagles set the tempo from the opening face-off, a trend that continued throughout the contest.

“They burned us at the X all day,” Chawla said. “It was a big tipping point. I haven’t seen the stats, but I guess they won 80 percent, maybe even 90. When you win 90 percent at the X, for us to be in it, and in an overtime game, got to give a little credit to our defense. But at the end of the game we didn’t play great.”

A pair of goals by Cashin Papadelis, Will VanLear and Christian McNulty reduced Hartland’s halftime lead to 6-4.

The Warriors’ only lead came by way of a flurry of goals opening the third quarter by Luke Washe, Sam Klein and Papadelis’ third to make it 7-6, an advantage that faded in the heat of Hartland’s rally to get back on top 10-8 heading into the final 12 minutes of play.

McNulty’s second goal and one by Nat Schultz tied the game and set up a 4-minute overtime, where Hartland notched the winning goal with a minute left.

“The guys kept going. They didn’t quit,” Chawla said. “But they got the last goal. They are a good team. The good news is that we’re going to be a force next year. We have lot of good players back.”

Brother Rice athletic director Jeff Calcaterra was upbeat about the Warriors’ accomplishments in 2021-22 in football, basketball, soccer and wrestling to state finals, golf’s second state title in a row, and lacrosse.

“In the Catholic League this year,” he continued, “in the Central Division from top to bottom, we were putting competitive kids and coaches in positions to be successful. We are at a good point as far as how competitive we are in multiple sports.”

Baseball and softball finales next

Several CHSL teams are in the hunt for a spot in softball and baseball championship games next Saturday.

In Division 4 baseball, Riverview Gabriel Richard (17-8) plays Rudyard (26-2-1) in a semifinal on Thursday, June 16. The final will be Saturday.