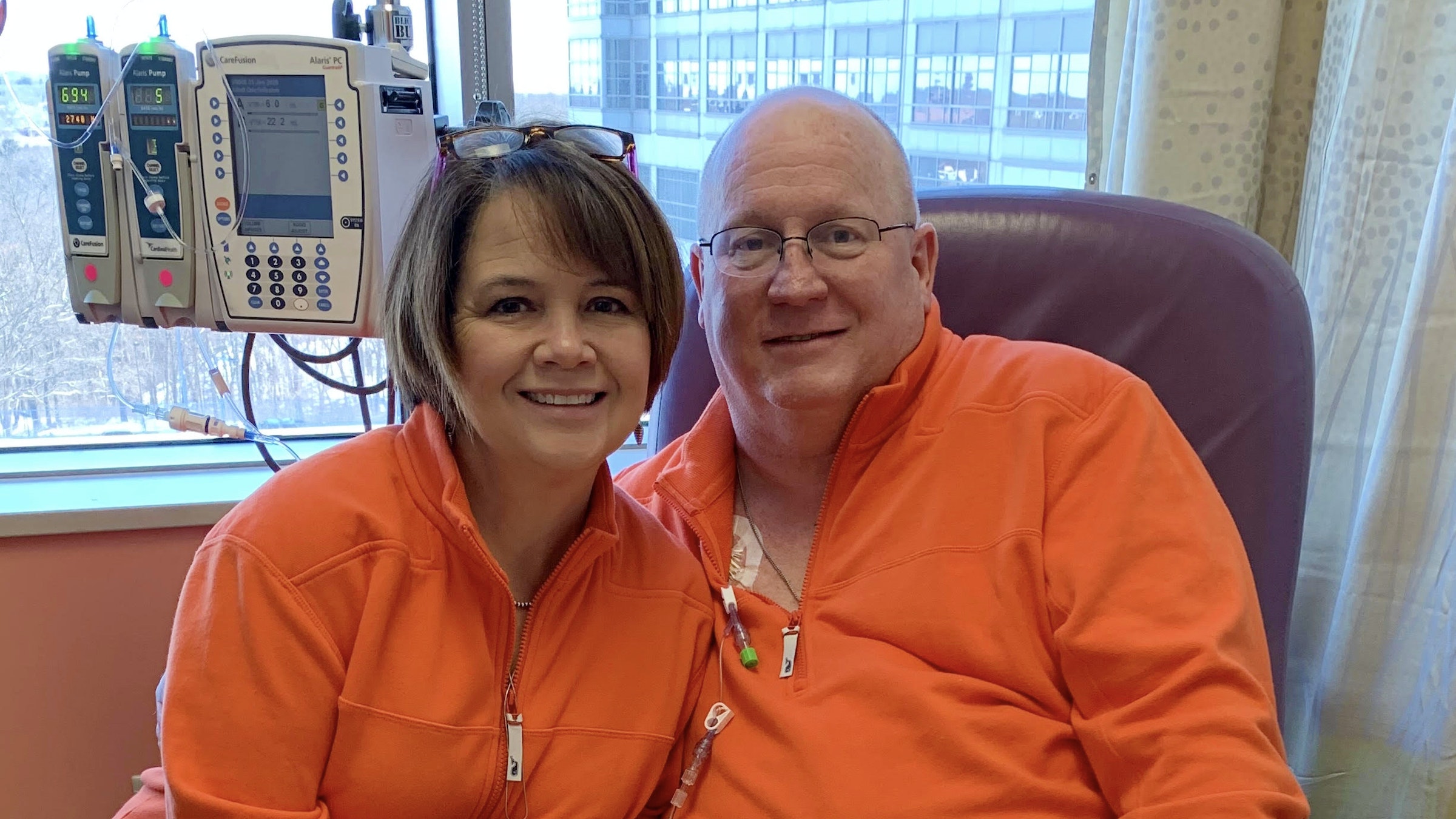 Jim Weeks and his wife, Krystin, smile during one of Jim’s pancreatic cancer treatments on Valentine’s Day. The couple, parishioners at Our Lady of Good Counsel in Plymouth, say they’ve drawn strength from watching how God has used Jim’s diagnosis to bring others back to prayer and the sacraments — though they haven't given up praying for healing. (Photos courtesy of Krystin Weeks)

Two years after devastating diagnosis, Jim Weeks refuses to miss Mass, leaning on friends, family and sacraments to carry him through

PLYMOUTH — Jim Weeks remembers that day, sitting in the adoration chapel at Our Lady of Good Counsel in Plymouth. It was February of 2019, and he had just been diagnosed with pancreatic cancer.

A priest whom he barely knew then, Fr. John Riccardo, came to be with him, and to pray with Jim and his family. He anointed Jim, and then brought a picture down from the wall — an image of the paralytic being lowered through the roof to Jesus at Capernaum.

“Fr. John showed me the picture and told me, ‘This is where you are right now. This is the cancer bringing you to Jesus, and all of your friends bringing you to him with their prayers,’” Jim recalled. “Then he said, ‘God is either going to heal you or He is going to give you great strength.’”

Jim and his wife, Krystin, say that moment made a huge difference in their approach to Jim’s battle with pancreatic cancer. Jim felt a newfound sense of peace.

For anyone, pancreatic cancer is a shocking diagnosis. For Jim, news of the aggressive cancer seemed especially cruel. Just four years earlier, Jim fought through stage IV non-Hodgkin’s lymphoma. He was six months from being in remission when the cancer on his pancreas was discovered.

The couple’s four daughters, ages 13 to 23, had already watched their father go through a difficult time and would now have to do it again.

“Both times I told them that Jesus is asking us to take this journey with him and trust him,” Krystin said. “No matter where this goes, no matter how this ends, we never lose our faith.”

Armed with the sacraments

After that experience with Fr. Riccardo in the adoration chapel, Jim and Krystin gathered information, interviewed doctors, and learned all they could to determine the best course of action. They prayed fervently, and asked their friends to pray for them, too.

After all, the more people lowering Jim through the roof, the better.

Soon, chemotherapy treatments and surgeries were under way, causing extreme fatigue and making it more difficult for Jim to go to church. Krystin tried to talk him into staying home on those Sundays when he seemed especially tired or weak — she would find a way to bring the Eucharist to him — but he wouldn’t budge.

“Even on bad days after chemo, I felt worse staying home and not receiving the Eucharist,” Jim said. “When I felt bad, I wanted and needed to go to Mass more than ever, even if that meant sitting the whole time.”

No matter what, Jim always stands for the reading of the Gospel.

The pandemic came to Michigan a year into Jim’s treatment. Churches closed, and Jim missed going to Mass in person. They attended parking lot Masses at Our Lady of Good Counsel so that Jim could receive Communion — the Bread of Life that was seeing him through the grueling every-other-Friday chemo sessions and endless doctor appointments. When churches opened, they attended Mass in church again, taking every precaution to protect Jim.

Fr. Solanus, pray for us

Not long after Jim learned of his pancreatic cancer, Krystin started a blog on Caring Bridge to keep family and friends posted on Jim’s medical news. She made a point to include photos of the family’s goings on: getaways up north between chemo treatments, their youngest daughter’s confirmation, socially distanced graduation events for their high school and college graduates, a family mask-making project for Hospital Mask Task Force.

And, of course, there are photos of Jim at chemo treatments, almost always with a smile and often wearing orange, Jim’s favorite color. Krystin asked family and friends to wear orange on Fridays to show their support. Friends sent selfies of their orange attire, and Krystin ordered orange armbands with her signature closing message at the end of every blog post, “Trusting God with Reckless Abandon.”

In 2017, the Weeks family attended the beatification Mass for Blessed Solanus Casey at Ford Field in Detroit. They heard about the stories of miraculous healings through Fr. Solanus’ intercession and have put Jim’s cause in his hands. Nearly every Caring Bridge blog post includes a quote or reference to Fr. Solanus.

Jim and Krystin also ask for intercession from Bridget Smith. Bridget, the daughter of dear friends, was only 12 when she passed away in 2012 from brain cancer.

The blog about Jim’s cancer journey unknowingly became a tool for evangelization. As Krystin asked for prayers, she introduced saints and novenas to friends and family, and explained to non-Catholic friends that “we ask saints to pray for us just as we would ask a friend to pray for us.”

“We talk about faith more openly with people now, which has been one of the gifts that cancer has given us,” Krystin said. “We wear our faith on our sleeves.”

After a while, Jim started to notice a pattern. One friend told Jim he had returned to Mass. Several shared with him that they’ve started praying again for the first time in 20 years.

“The last two years are covered with comments like that. Sometimes I wonder if maybe God is using us to bring people back to Him,” Krystin said. “We’ve always prayed, from the time Jim was diagnosed with lymphoma, that God would let us receive what He needed us to receive from this cancer journey, and give to others what He wants us to give. I don’t believe this is just for us. I feel there are gifts, or messages, that God wants us to give others through our suffering.”

The results from a CT scan in December show that the cancer on Jim’s pancreas is gone. Two years after his diagnosis, his doctors aren’t sure what to think. Typically, only 18% of pancreatic cancer patients survive the first year.

Cancer remains on his liver. Treatments will continue, and though the road ahead is uncertain, hope shines bright.

“I’ve learned to live life one day at a time with as much normalcy as I can,” said Jim, who continues to work four days per week, mostly from home. “My faith is everything. It has really grown in this whole process, and it’s been helped by Krystin and my daughters and everyone who has been praying for me.”

Just like the paralytic in the Gospels who was changed forever, Jim plans to continue following Jesus for the rest of his life with reckless abandon.

Even as he continues to be lowered through the roof.

Editor's note: Jim Weeks passed away Aug. 3, 2021. We thank you for keeping his family and loved ones in your prayers.