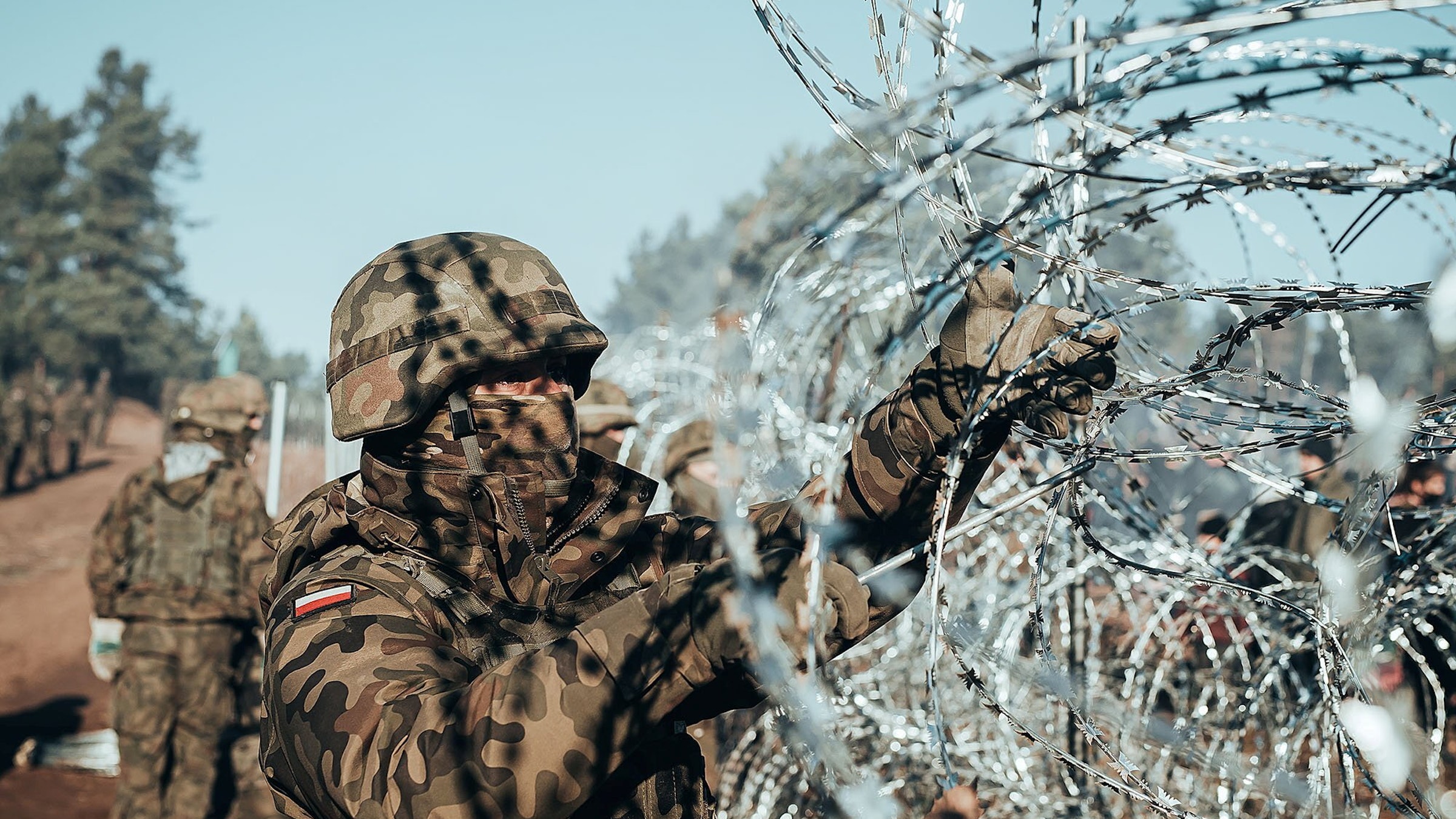 A Polish soldier installs barbed wire on the Poland-Belarus border near Kuznica, Poland, Nov. 9, 2021. Poland deployed 15,000 troops with razor wire and tear gas and announced plans for a 65-mile border wall after stranded migrants, mostly from Asia and the Middle East, amassed at the border. (CNS photo/Irek Dorozanski. DWOT handout via Reuters)

WARSAW, Poland (CNS) ─ Poland's military archbishop urged security forces to prevent the illegal entry of refugees and migrants, as the country's bishops' conference announced a nationwide collection to help those amassing on the frontier with Belarus.

"Our republic's eastern border is under attack -- we all look with hope and gratitude to you, soldiers of the Polish Army, who are fulfilling their military oath and risking health and life to guard our sovereignty," said Archbishop Józef Guzdek, who heads the Polish church's military diocese. "Thank you for your dedication and awareness of the difficult situation of migrants exploited by the Belarusian regime, and for the families supporting you in this dangerous, dedicated service for Poland, Europe and the world."

The archbishop issued the appeal Nov. 10 as Polish Defense Minister Mariusz Blaszczak told national radio stranded migrants, mostly from Asia and the Middle East, had been trying to break through border fences in freezing overnight conditions.

However, he added that "much more" was needed in face of a "humanitarian catastrophe" and set a special collection for Nov. 21 to support the "long-term integration of refugees deciding to stay in Poland."

"The church's primary mission lies in proclaiming the Gospel -- so when it's necessary to provide help for newcomers, we must not avoid this," Archbishop Gadecki said Nov. 8.

"Without prejudicing the security of the Polish republic and its citizens, we must show solidarity with people in need. In the present situation, the good Samaritan parable message becomes ever more urgent."

President Andrzej Duda declared a state of emergency at the border after Polish and European Union claimed that Belarusian President Alexander Lukashenko's regime had flown refugees from at least 20 countries to Belarus aboard Russian and Turkish state airlines and bused them to the border in retaliation for EU sanctions over its human rights abuses.

However, aid agencies have accused Poland of blocking proper asylum procedures and contributing to refugee deaths from hypothermia and exhaustion, after it deployed 15,000 troops with razor wire and tear gas, and announced plans for a 65-mile border wall.

The deputy director of Polish Caritas, Franciscan Father Cordian Szwarc, told the Catholic Information Agency KAI Nov. 9 his organization was setting up "tents of hope" for refugees, with help from local priests and parishioners.

However, he warned the situation remained "tense and difficult," and said many Poles were torn between a "strong moral obligation to help those in need" and fear for the safety of their families.

The Catholic church in Belarus has said nothing publicly about the crisis, but published a brief website prayer for those "deprived of home, family and everything they know."

"The government has a duty to keep citizens safe and guard borders -- if someone crosses illegally, he must reckon on being isolated and deported," Bodnar told the newspaper. "But this must always be in line with human rights standards."