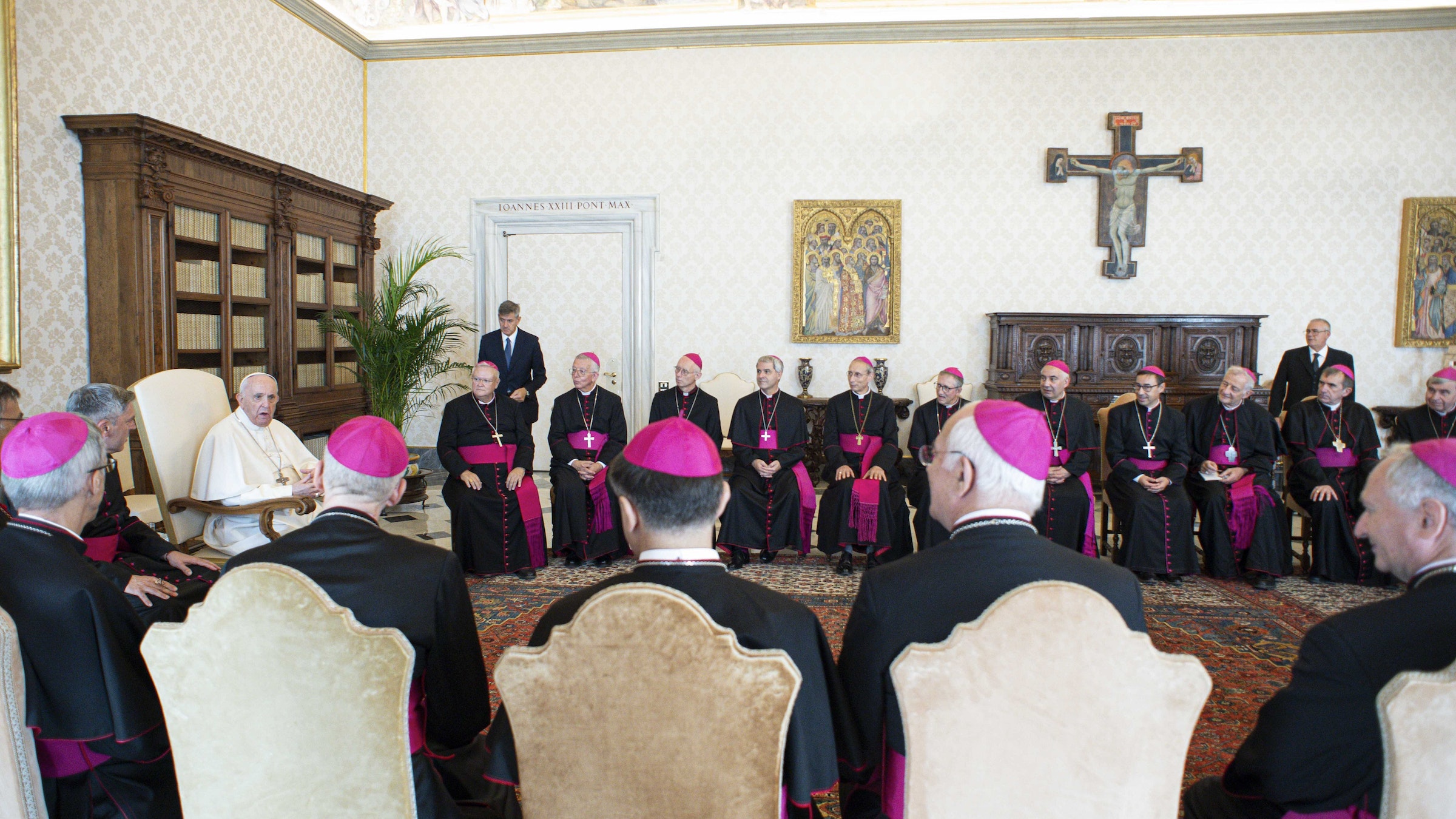 Pope Francis meets with French bishops making their "ad limina" visits to the Vatican Sept. 23, 2021. The pope sent a letter to the president of the French bishops' conference as it holds its plenary assembly in Lourdes Nov. 2-8. (CNS photo/Vatican Media)

VATICAN CITY (CNS) ─ Pope Francis urged the bishops of France to carry the cross of the abuse crisis with faith and hope, to console and care for victims and reach out to the majority of priests who are faithful to their vocation.

"I am certain that together, and under the guidance of the Holy Spirit, you will find the means: to honor and console the victims; to exhort all believers to penance and a conversion of heart; to take all necessary steps to make the church a safe home for everyone; to care for the wounded and scandalized holy people of God; and to take up the mission with joy, looking resolutely to the future," he said in a letter.

"As you go through the storm caused by the shame and tragedy of the abuse of minors in the church, I encourage you to carry your burden with faith and hope, and I carry it with you," the pope wrote.

The letter, addressed to Archbishop Éric de Moulins-Beaufort, president of the French bishops' conference, was sent during the bishops' plenary assembly in Lourdes Nov. 2-8. The bishops released a copy of the letter online Nov. 3.

Their meeting came just one month after the release of a report by an independent commission that estimated 330,000 children had been abused by Catholic priests or church employees in France since the 1950s.

"The scale of violence and sexual assault on minors revealed by this report requires the church to reexamine its practices in light of reality," the French bishops' conference said in a statement issued after the report's release. The bishops' conference said it would be working on necessary "measures and reforms" in line with the report's recommendations at its plenary.

In his letter, Pope Francis encouraged the bishops to recognize the people of France "await the Good News of Christ" and they need it now more than ever.

"For this reason, I entrust with particular tenderness to your paternal solicitude the vast majority of your priests who fulfill their ministry with generosity and dedication, and whose beautiful vocation is unfortunately being tarnished. They need to be strengthened and supported at this difficult time," he wrote.