Pope meets with genocide survivor who inspired his Iraq trip 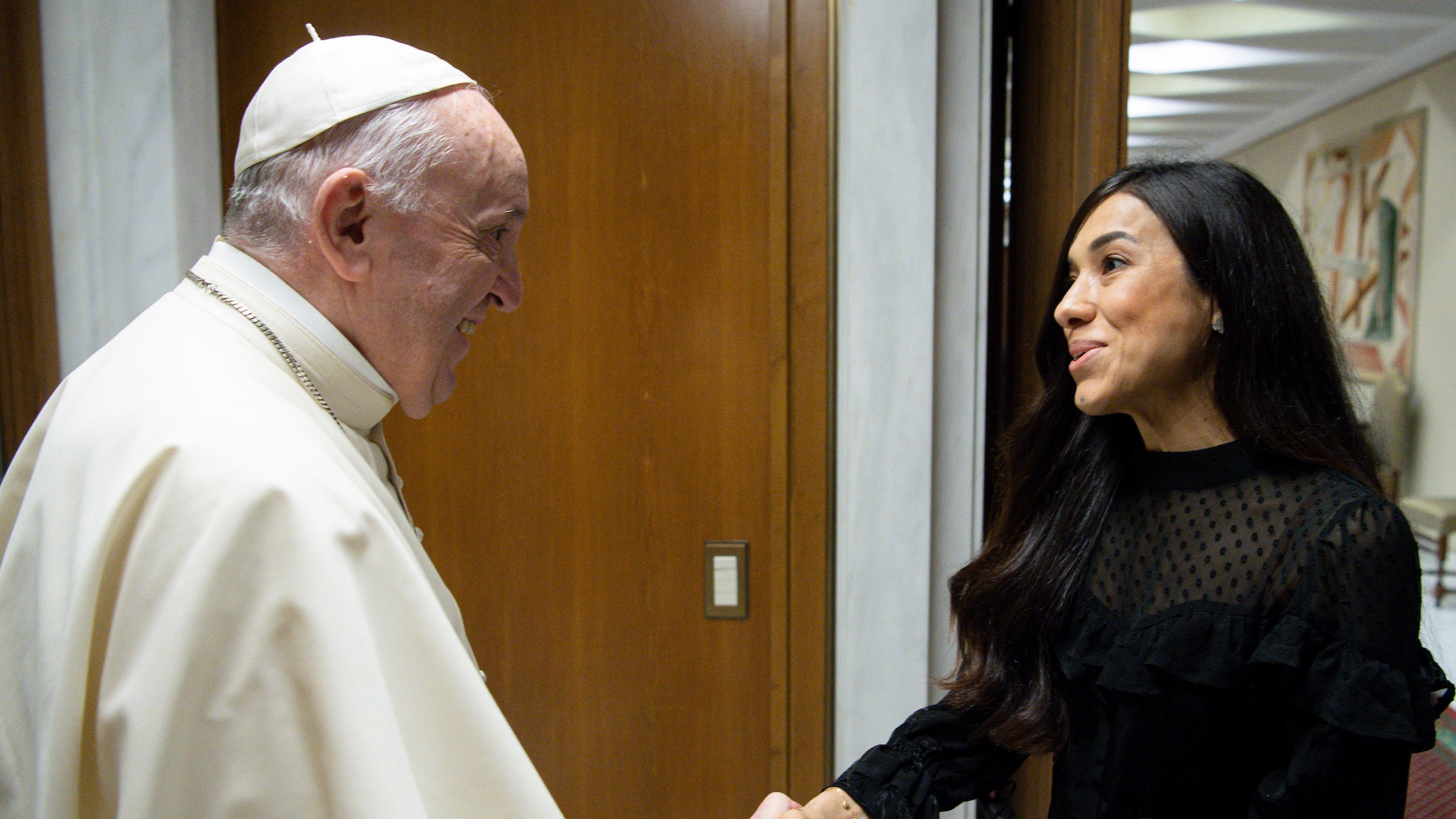 Pope Francis meets with Nobel Peace Prize laureate Nadia Murad during a private meeting at the Vatican Aug. 26, 2021. Murad was kidnapped by Islamic State militants in Iraq in 2014 during a genocidal campaign against the Yazidi people. (CNS photo/Vatican Media)

While the Vatican did not release any details about the visit, Murad tweeted Aug. 27, "We discussed the importance of support for #Yazidis & other minority communities in Iraq. In light of the heart-wrenching events in #Afghanistan, we exchanged ideas on championing women & survivors of sexual violence."

"I thank @Pontifex for welcoming me to the Vatican once again," she tweeted, along with a photo of the pope looking through a book and Murad holding a copy of the document on "Human Fraternity for World Peace and Living Together," which Pope Francis and Egyptian Sheikh Ahmad el-Tayeb, the grand imam of Al-Azhar, signed in 2019.

The pope had met Murad previously at the Vatican at the end of a general audience in St. Peter's Square in May 2017 and privately in December 2018, after she and Denis Mukwege were jointly awarded the Nobel Prize for "their efforts to end the use of sexual violence as a weapon of war and armed conflict."

She is the first Iraqi and Yazidi to be awarded a Nobel Prize.

She survived a genocidal campaign against the Yazidis by Islamic State militants in Iraq in 2014. The militants kidnapped her, and she escaped captivity after three months.

In an Aug. 16 tweet commenting on recent events in Afghanistan, she wrote: "My heart breaks for the next generation of girls & women whose nation has been overtaken by the Taliban. Kabul fell on the same day my village fell to ISIS 7 years ago. The international community must address the repercussions before tragedy is repeated."

Murad has been leading efforts to raise awareness about the plight of the Yazidi people, the need to hold ISIS accountable and to advocate for women in areas of conflict and survivors of sexual violence. She is the U.N. goodwill ambassador for the dignity of survivors of human trafficking.

She founded Nadia's Initiative and seeks to meet with world leaders to convince "governments and international organizations to support sustainable redevelopment of the Yazidi homeland," according to the initiative's website.

Pope Francis told reporters flying back to Rome from Iraq March 8, 2021, that one of the reasons he became convinced he had to visit the nation was after reading Murad's memoir, "Last Girl: My Story of Captivity and My Fight Against the Islamic State."

A reporter had given him a copy of the book, he said, and "that book affected me."

He said when he met Murad, she told him "terrible" things and "then, with the book, all these things together, led to the decision, thinking about all of them, all those problems."

"At certain points, since it is biographical, it might seem rather depressing, but for me this was the real reason behind my decision," he said.