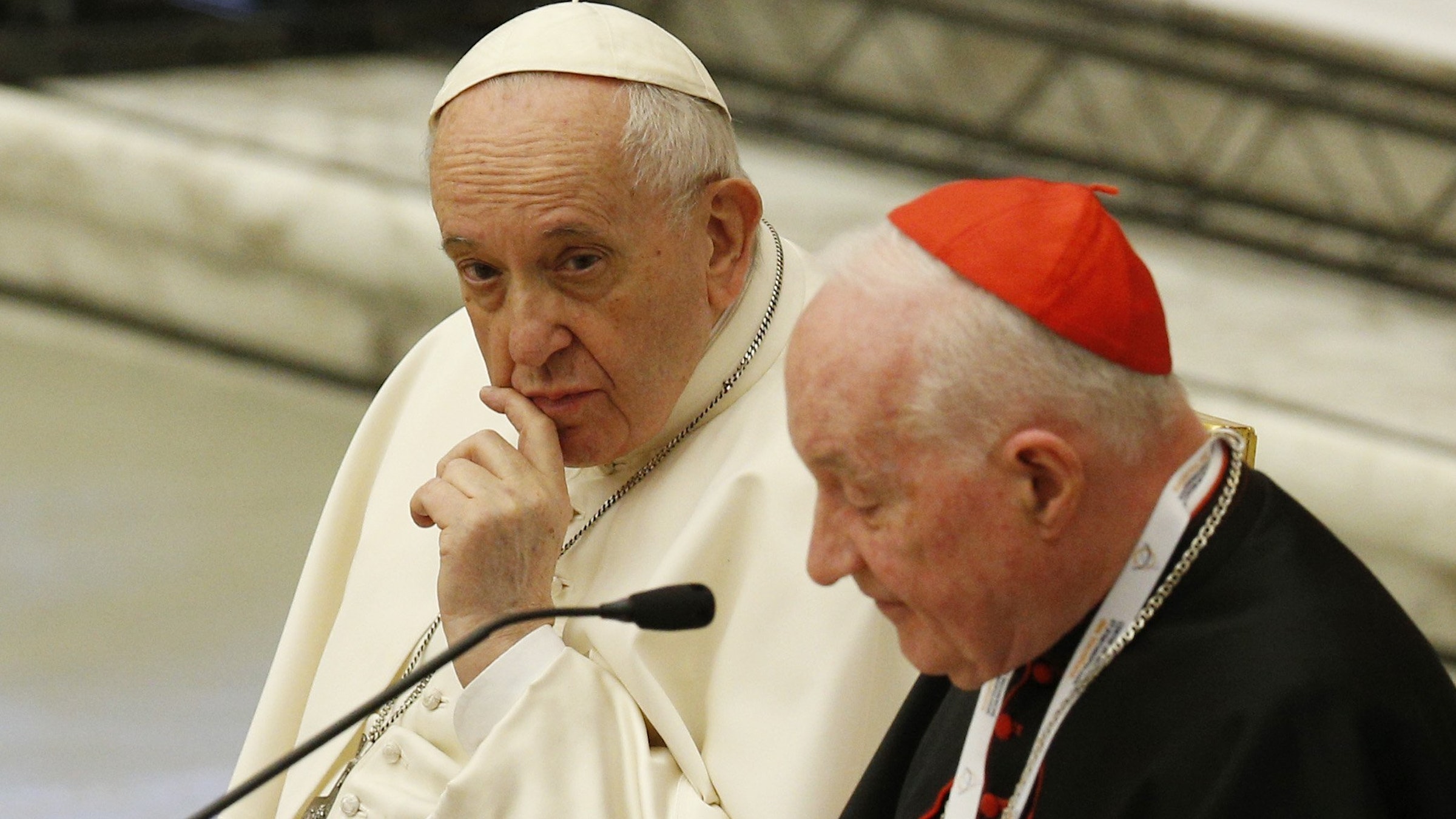 Pope Francis looks on as Cardinal Marc Ouellet, prefect of the Congregation for Bishops, speaks at the start of a symposium on priesthood at the Vatican in this Feb. 17, 2022, file photo. The Vatican press office, in an Aug. 18 statement, said the pope decided that there was not sufficient evidence to open canonical proceedings against Cardinal Ouellet for alleged sexual assault.(CNS photo/Paul Haring)

VATICAN CITY (CNS) ─ A preliminary Vatican investigation into allegations against Cardinal Marc Ouellet concluded there was not sufficient evidence to warrant opening up formal proceedings against the cardinal for sexual assault, a Vatican spokesman said.

However, the Jesuit who did the investigation was a long-time associate of the cardinal.

Pope Francis has been made aware of these findings and, after further consultation, has declared that "there are insufficient elements to open a canonical investigation for sexual assault by Cardinal Ouellet against person F," Matteo Bruni, head of the Vatican press office, said in a written statement Aug. 18.

Bruni wrote that a preliminary investigation ordered by Pope Francis had been completed and that it concluded there were no facts or "elements to initiate a trial against Cardinal Ouellet for sexual assault." The Canadian cardinal is prefect of the Vatican Dicastery for Bishops.

Bruni confirmed that Belgian Jesuit Father Jacques Servais had been chosen by the pope to conduct the preliminary study after he was accused of actions allegedly committed against a young laywoman, identified as "F" in Canadian court documents in a class action lawsuit against the Archdiocese of Quebec.

Bruni sought confirmation of the Vatican investigation directly from Father Servais, who replied: "There are no grounds to open an investigation into the sexual assault of F. by Card. M. Ouellet. Neither in his written report sent to the Holy Father, nor in the testimony via Zoom that I subsequently collected in the presence of a member of the (arch)diocesan ad hoc committee, did this person make any accusation that would provide grounds for such an investigation."

Based on these findings and after "following further relevant consultations, Pope Francis declares that there are insufficient elements to open a canonical investigation for sexual assault by Cardinal Ouellet against person F," Bruni said.

Cardinal Ouellet is a close adviser to Pope Francis, and he has been the prefect of the Dicastery for Bishops, formerly the Congregation for Bishops, since 2010. He was appointed to the position by Pope Benedict XVI.

However, Pope Francis' 2019 motu proprio, "Vos estis lux mundi," states that any person helping in the investigation of potential abuse "is required to act impartially and must be free of conflicts of interest. If he considers himself to be in a conflict of interest or be unable to maintain the necessary impartiality required to guarantee the integrity of the investigation, he is obliged to recuse himself and report the circumstances to the metropolitan."

Father Servais and Cardinal Ouellet were both members of the Lubac-Balthasar-Speyr Association, first assembled in 1991 at the initiative of then-Cardinal Joseph Ratzinger, who gathered together a group of disciples and friends of Henri de Lubac and Hans Urs von Balthasar, coming from various countries and belonging to diverse ecclesial or religious states. Father Servais chaired the association, and Cardinal Ouellet, then a priest, was one of the founding members. Now-Cardinal Christoph Schonborn of Vienna and U.S. Jesuit Father Joseph Fessio were among other members of the six-member group.

In the class action lawsuit, Cardinal Ouellet was accused of actions allegedly committed against a young laywoman who was employed as a pastoral worker in 2008, when the cardinal was archbishop of Quebec. Court documents filed Aug. 16 indicate the actions consisted in "nonconsensual touching of a sexual nature."

Another bishop appears in the list. Auxiliary Bishop Jean-Paul Labrie, who died in 2001, served in the Quebec Archdiocese from 1977 to 1995. In his case, the alleged abuse occurred in 1968 when he was the superior of the seminary of Saint-Victor de Beauce in Quebec.

The class action suit was authorized by a judge of the Superior Court of Quebec May 19. It was filed on behalf of all "people having been sexually abused by a member of the diocesan clergy" or "by a religious, a lay pastoral staff member, an employee, and a lay or religious volunteer" under the responsibility of the Quebec Archdiocese between January 1, 1940, and the upcoming ruling in the case.

The lawsuit includes the names of priests associated with the Quebec seminary, as well as those serving in the archdiocese, in parishes and at educational institutions. Most of those named are deceased. Many of the victims were younger than 18 at the time of the first alleged abuse.

Archdiocesan authorities were informed in January 2021 of the allegations against Cardinal Ouellet. A leader of the Archdiocesan Committee for the Protection of Minors and Vulnerable Persons even asked the victim to personally write a letter to Pope Francis.

An email from the Vatican Feb. 23, 2021, acknowledged that the pope read the letter and that he had appointed an investigator to the case: Father Servais, rector of the Casa Balthasar in Rome, a residence for young people discerning a call to religious life and for theology students.

Court documents indicate that in August 2008, a 23-year-old woman identified as "F" started working as a pastoral agent in the Quebec Archdiocese and attended a meeting with all archdiocesan personnel. There, she met Cardinal Ouellet, for the first time.

She was sitting in the back of the room, documents said, when she "suddenly felt two hands on her shoulders, and they started to strongly massage her shoulders." She recognized the cardinal right away, and "he smiled at her and caressed her back before leaving."

"F was frozen following this intrusion and didn't know how to react," the lawsuit said. She recognized she felt troubled, and "a feeling of unease stayed with her for the rest of the day."

A few months later, she again met the cardinal during a reception. He kissed her "with familiarity" and "firmly pressed her against him while caressing her back with his hands," the document said.

In February 2010, during a party, the cardinal said to the young woman that "he could surely kiss her again, 'for there isn't any harm in spoiling oneself a bit.' F found this comment completely inappropriate," the document said. The cardinal went ahead and "slid his hand down F's back, down to her buttocks," it said.

Afterward, according to the document, F avoided all meetings and locations where she might run into the cardinal. "When F dares to speak of her uneasiness toward the cardinal, she is told that he is very warm and friendly, and that she isn't the only woman to have had this sort of problem with him," the filing stated.

It was 10 years later, following a workshop on sexual abuse, that the pastoral worker "understood that the actions of Cardinal Ouellet were nonconsensual touching of a sexual nature, and therefore a sexual aggression," the document said.

In November 2020, without revealing the cardinal's name, the complainant sent an email to the Archdiocesan Committee for the Protection of Minors and Vulnerable Persons. In January 2021, she mentioned Cardinal Ouellet's name to the diocesan authorities. They answered that the pope should immediately be informed.

The young woman is one of 101 people who contacted the Arsenault Dufresne Wee Avocats law firm since May when the class-action suit was authorized by Superior Court Judge Bernard Godbout.

Gloutnay writes for Présence info in Montreal. Carol Glatz at the Vatican contributed to this story.