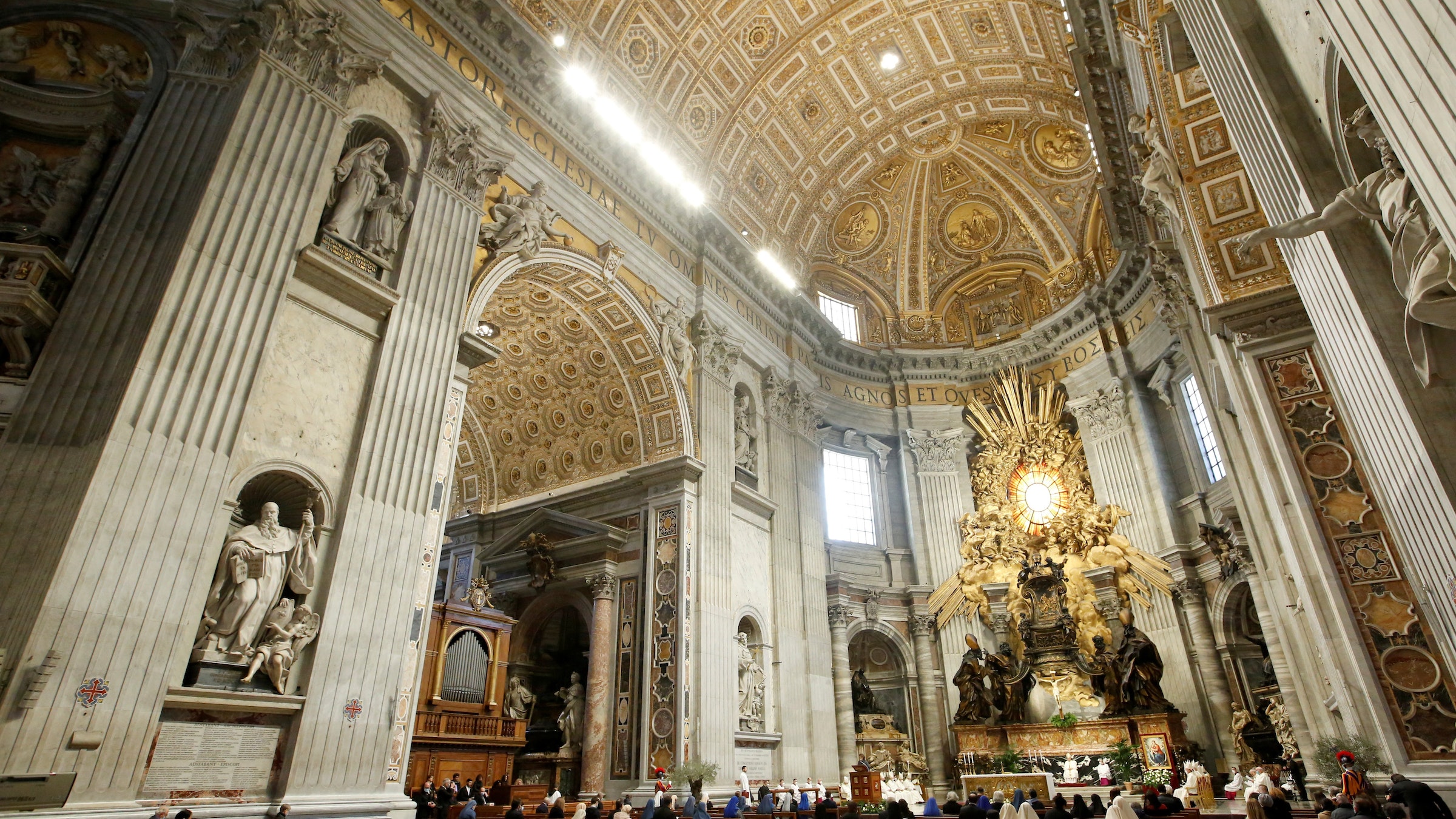 St. Peter's Basilica is pictured during the Mass of the Lord's Supper on Holy Thursday at the Vatican April 1, 2021. Pope Francis has issued "transitory" reforms in effect for one year to the Chapter of St. Peter Basilica -- an organization whose priest-members offer prayers in the basilica. The chapter's statutes are currently being revised. (CNS photo/Remo Casilli, pool via Reuters)

VATICAN CITY (CNS) –– Pope Francis has approved a brief set of new norms for the Chapter of St. Peter's Basilica –– whose priest-members provide liturgical and pastoral service in the basilica –– that will only be in effect for one year while its statutes are being revised.

As part of the start of a full reform of the chapter, the pope approved a series of "transitional provisions" that will go into effect Oct. 1, the Vatican announced Aug. 28. The norms include limiting Vatican sources of income for the just under 30 members and specifying who is in charge of administering and managing different assets.

The Chapter of the Papal Basilica of St. Peter in the Vatican was established by St. Leo IX in 1053 for carrying out liturgical services starting with the original basilica. Its members also carried out pastoral activities and managed the vast patrimony of the basilica and its subsidiary churches as well as real estate and assets donated by benefactors or acquired by the canons.

According to the new norms, the chapter continues to consist of a college of priests appointed by the pope as canons, who "provide liturgical and pastoral service to St. Peter's Basilica" and who will receive payment from the Fabbrica di San Pietro that cannot be combined with any commissions or compensation "for services rendered in the Roman Curia and in other institutions connected with the Holy See.”

The chapter's coadjutors are also appointed by the pope with the same specifications as the canons regarding payment, and they will provide their services "in liturgical celebrations, in pastoral works and in other tasks that may be entrusted to them by the archpriest" of the basilica together with the chapter, it said.

The chapter's group of clergy had served as "guardians" of the basilica's Treasury Museum, which includes valuable historical religious objects, papal tiaras, funerary monuments, statues –– including an authentic copy of the Pietà, and valuable gifts donated by kings or royalty.

Now, "the administration and management of the economic activities connected to the Treasury Museum and the sale of religious objects is entrusted to the Fabbrica di San Pietro," which also hires all the employees of the chapter, the norms said. The fabbrica is the office responsible for the upkeep and maintenance of the basilica.

The transitional norms, however, specify that the chapter will retain and administer the real estate and financial assets that currently exist, as well as the related revenues and annuities.

Vatican News said the new norms were intended to emphasize the liturgical and pastoral service of the canons in the basilica.

Pope Benedict XVI had told the canons during an audience in 2007 that the chapter had been working to "rediscover its true, original function that consisted above all in the ministry of prayer" so that the basilica can be "an authentic place of prayer, adoration and praise of the Lord.”

He said, "This is the proper nature of the Vatican chapter and the contribution that the pope expects of you: to recall with your prayerful presence at Peter's tomb that nothing can come before God; that the church is entirely oriented to him and to his glory.”