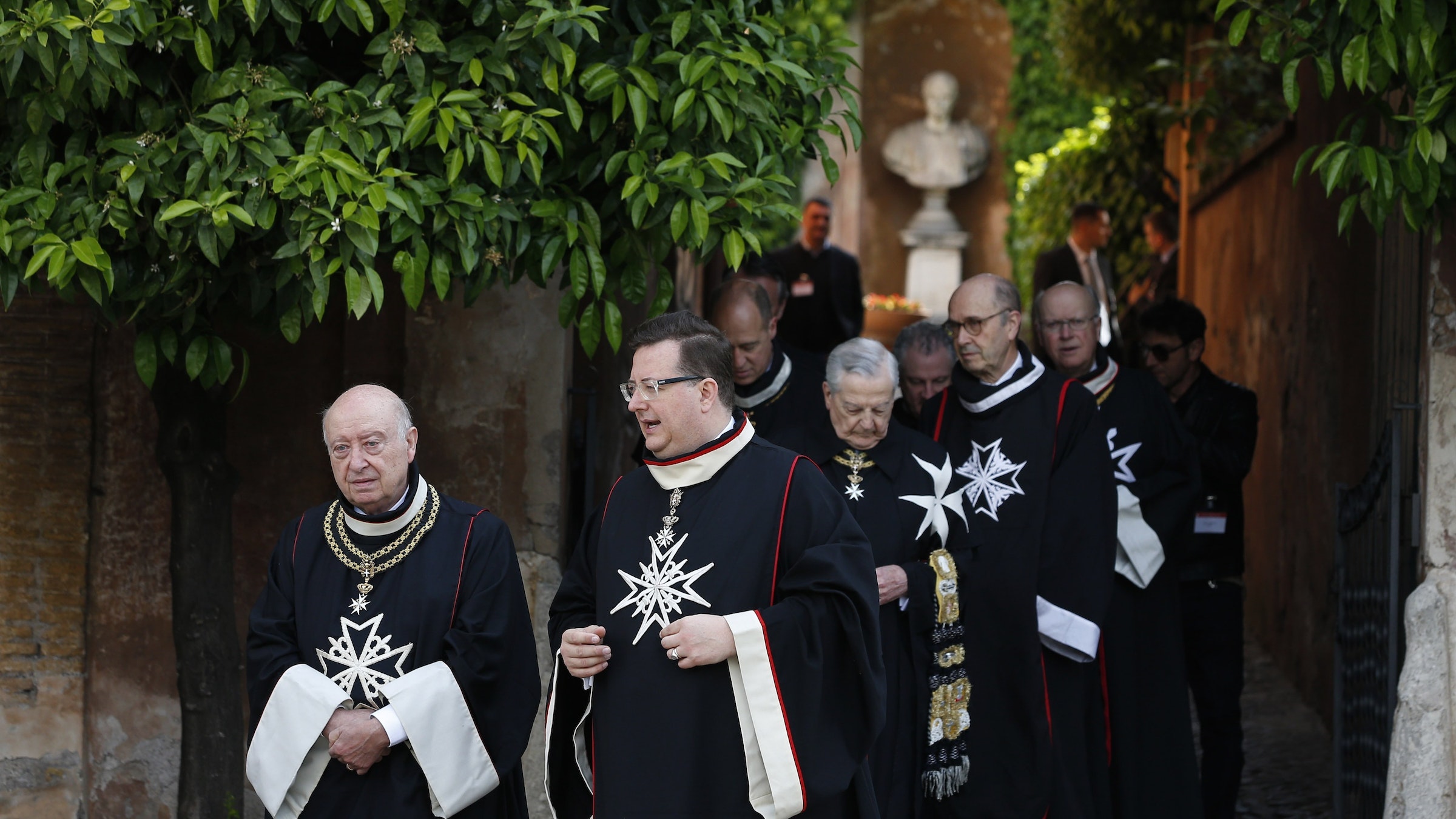 Members of the Knights of Malta walk in a procession at the start of voting to elect a new leader in Rome in this May 2, 2018, file photo. Pope Francis in a written message told the Knights of Malta to strengthen their unity, otherwise they will not be credible in their works of charity. (CNS photo/Paul Haring)

VATICAN CITY (CNS) ─ Conflict and division hurt the mission of the Knights of Malta, and craving for power creates distance from Christ, Pope Francis told members of the religious, charitable and chivalric order.

"Firmly strengthen your unity, otherwise you will not be credible in your work," he said in a message to members taking part in an extraordinary chapter general of the sovereign order Jan. 25.

"Conflicts and opposition harm your mission. Lust for power and other worldly attachments create distance from Christ; they are temptations to be rejected," he said in the text.

The pope had called for the extraordinary gathering to be held Jan. 25, feast of the conversion of St. Paul, as part of a process of renewal for the Sovereign Order of Malta. He called for the gathering the same day he appointed a provisional sovereign council and promulgated a new constitution and code "to safeguard the unity and greater good" of the Sovereign Order of Malta, he said in the decree Sept. 3.

The order has been involved in a process to revise its constitution and to promote its spiritual renewal since 2017.

In his message, released by the Vatican Jan. 25, the pope said, "The unity of all the members of the order is necessary for the fulfillment of its mission."

The devil always tries to create division, he said. "Let us be careful not to compromise with the tempter, even unintentionally. He often deceives under the guise of good, and what may appear to be for the glory of God may turn out to be our own vainglory."

All members of the Knights of Malta together with its volunteers are being called "to receive and implement" the new constitutional charter and code to bring spiritual renewal and new vigor in its exercise of charity throughout the order, "thus strengthening its unity," the pope wrote.

Founded in Jerusalem in the 11th century, the Knights of Malta is a lay religious order recognized as a sovereign state by international law, which helps to facilitate its humanitarian missions around the world and maintain diplomatic relations with over 100 countries.

The Knights of Malta have 13,500 members, as well as 80,000 volunteers and 25,000 medical professionals providing relief and humanitarian aid in 120 countries.

Pope Francis thanked the order for its efforts, particularly its work with immigrants and in Ukraine and bordering nations, and for offering consolation and spiritual support as well as material assistance.

"There is no other way to build a more just world than that of the Gospel; and we are called to begin with ourselves, practicing charity where we live," he wrote.

Another act of charity, he told the Knights of Malta, is for them to forgive whatever offenses or indignities they have suffered. "I ask you from my heart to achieve sincere mutual forgiveness, reconciliation, after moments of tension and difficulties you have experienced in the recent past."

"Knowing how to forgive is an indication of freedom, generosity of the heart, the capacity for unconditional love; it is an expression of a merciful heart; it translates into lived fraternity, manifested cordiality, the exchange of feelings," he wrote. "And this is how they will know that you are disciples of the Lord Jesus."