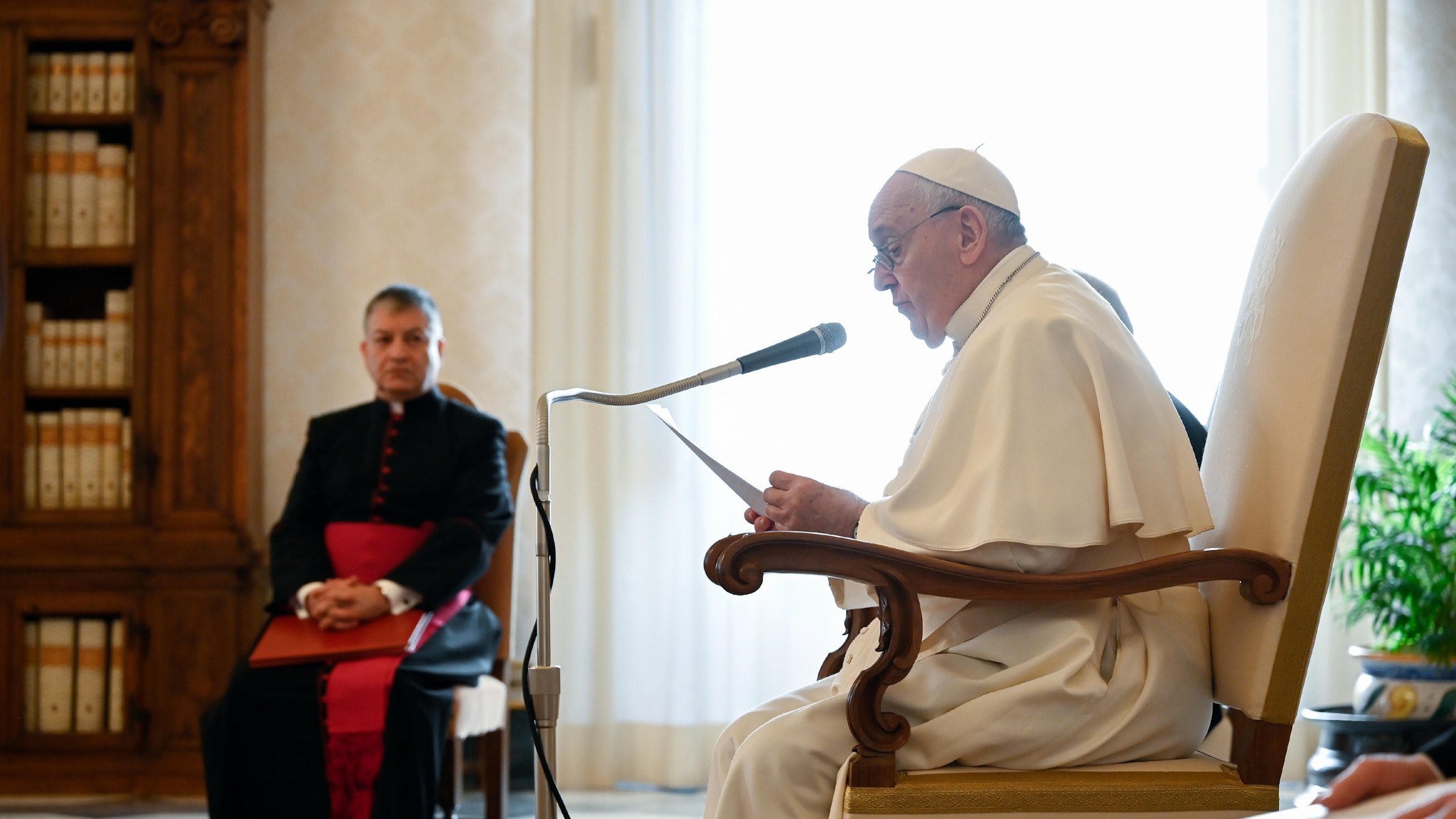 Pope Francis leads his weekly general audience from the library of the Apostolic Palace at the Vatican Jan 13, 2021. In his main talk, the pope focused on the importance of praising God in times of darkness and difficulty. (CNS photo/Vatican Media)

VATICAN CITY — It may seem illogical, but Christians are called to give God praise -- not complaints -- in times of darkness and difficulty, Pope Francis said.

Jesus and the saints "show us that we can always give praise, in good times and bad, because God is the faithful friend -- this is the foundation of praise, he is the faithful friend and his love never fails. He is always by our side; he always waits for us," the pope said Jan. 13 during his weekly general audience.

This is why, he said, "praising God is like breathing in pure oxygen. It purifies the soul, it helps you look at the horizon" and not see oneself as imprisoned or trapped in the current moment.

Livestreamed from the library of the Apostolic Palace, the pope continued his series of talks on prayer, reflecting on the prayer of praise.

He reflected on the time in Jesus' early ministry when his great works and miracles were still met with unbelief: St. John the Baptist, who had been imprisoned, was unsure whether Jesus was truly the Messiah; some towns remained unrepentant; and the wise and learned had rejected his preaching.

According to St. Matthew, "Jesus does not lift up a lament to the Father, but rather a hymn of jubilation" and praise during this time of crisis and disappointment, he said.

"First and foremost, he praises him for who he is: 'Father, Lord of heaven and earth.' Jesus rejoices in his spirit because he knows and he feels that his father is the God of the universe" and he is "my father," he said.

"Praise springs from this experience of feeling" that he is the son of God and is loved.

Jesus' prayer and praise should also teach everyone who reads the Gospel "to judge our personal defeats in a different way, the situations in which we do not see clearly the presence and action of God, when it seems that evil prevails and there is no way to stop it," the pope said.

"Jesus, who recommended the prayer of asking questions so much, at the very moment when he would have had reason to ask the father for explanations, instead begins to praise him," Pope Francis said. "It seems like a contradiction, but this is where the truth lies."

Praising God adds nothing to his greatness, he said, rather it allows one to experience the same happiness "of the pure of heart who love God in faith before seeing him in glory."

"Paradoxically it must be practiced not only when life fills us with happiness, but above all in difficult moments, when the path becomes steep," he said, because "we learn that, through that ascent, that wearisome path, those demanding passages, we get to see a new panorama, a broader horizon."

For some reason, God willed that it would be "the little ones," the pure of heart who would be most receptive to him, while the "learned" and the "wise" remained suspicious, closed and calculating, he said.

Jesus rejoices in this fact, and "we too must rejoice and praise God because humble and simple people welcome the Gospel."

"In the future of the world and in the hopes of the church," the pope said, "there are the 'little ones' -- those who do not consider themselves better than others, who are aware of their own limitations and their sins, who do not want to lord it over others -- who, in God the father, recognize that we are all brothers and sisters."

Pope Francis asked people to take inspiration and courage from the examples of Jesus and the saints, who lived in a world that did not fully change with their preaching and who themselves would ultimately face death.

"Let us have the courage to say, 'Blessed are you, Lord,' and praise the Lord," he said. "This will do us good."