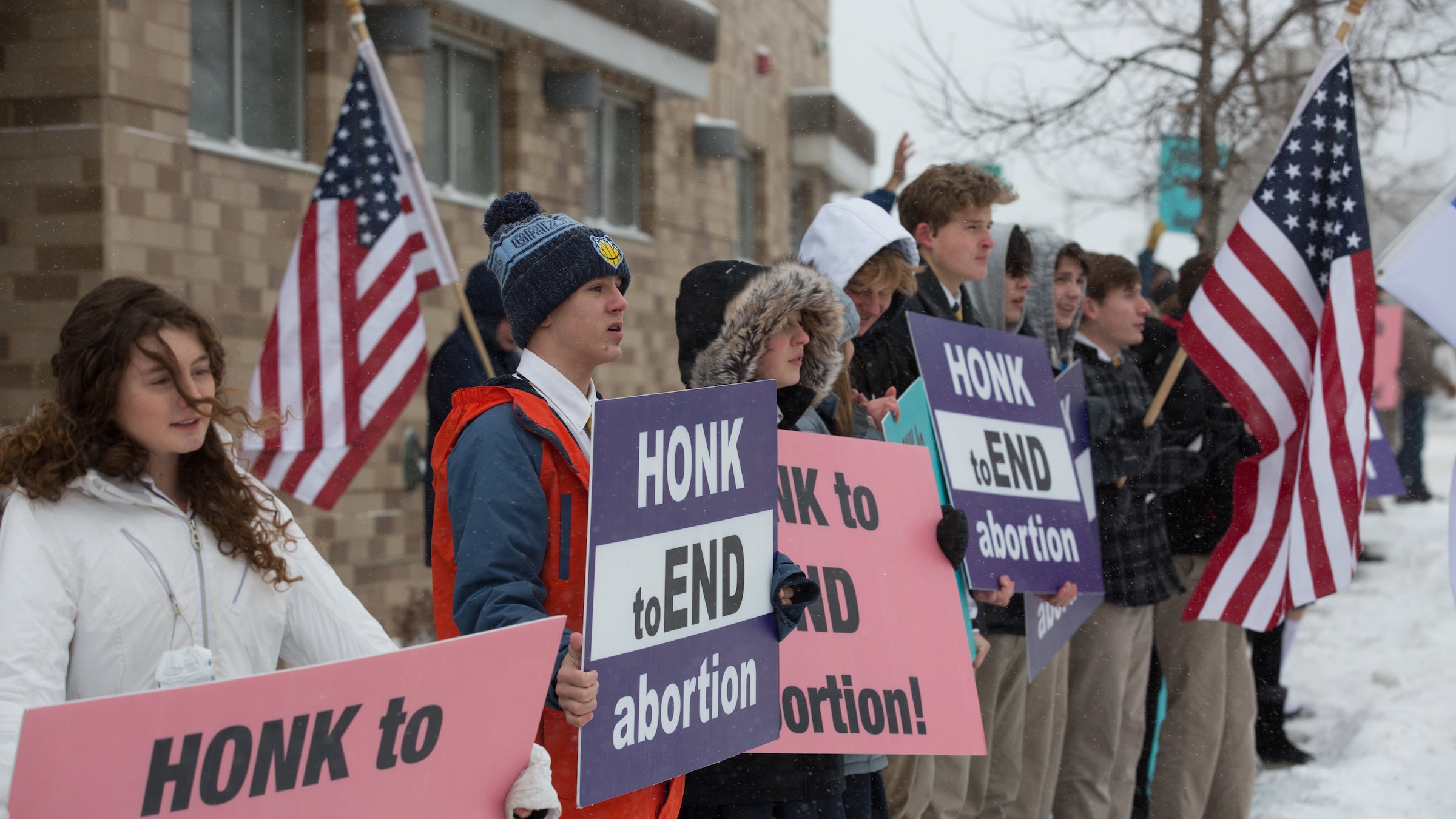 HOPKINS, Minn. (CNS) ─ Every Monday morning at 7:45 during the school year, a long line forms in the school office at Chesterton Academy in Hopkins.

Most weeks, it stretches into the school entryway and out the front doors. On Jan. 3, 40 students made sure to arrive before the bell rang to signal the start of the school day.

Why? To be part of a group that, two days later, would get into several vehicles and SUVs, head 15 miles to St. Paul and pray a rosary in the biting cold at Planned Parenthood, so they could make their presence felt as the "pro-life generation."

They call themselves "Crusaders for Life," and are led by a fierce defender of life -- and Chesterton parent -- Kalley Yanta, a regular at prayer gatherings at Planned Parenthood and other abortion facilities for the past 20-plus years.

Although Yanta, who came up with the idea during the previous school year and pitched it to administrators, was unable to attend this gathering because of a COVID-19 quarantine, she was there in spirit -- and by text -- cheering on the students and their parent chaperones.

Despite the serious nature of the abortion issue and the fight to end the killing of unborn children, this gathering, like all others, was marked by joy.

Plus, plenty of horn honking. At the prayer gathering, students held signs that read "Honk to End Abortion." Many motorists obliged, with some laying on their horns for a second or two. There also were occasional blasts from semi-trailers, which, in the words of senior Gabriel Schmitz, "shake the whole (Planned Parenthood) building."

Although nearly all of the students were shivering in the subzero cold by the end of the final Hail Mary, their passion to fight against abortion remained red hot. The truth is, there would have been more than 40 students at this prayer gathering if Yanta hadn't capped the list at 40 for safety and logistical reasons.

That's why there is such a rush every Monday to get to school early. Sophomores Claire Lelemsis and Therese Rivard, among others, want to make sure they get on the list every week. Both were part of the first group that went last school year, and have only missed signing up once since then.

"We kind of have a system," said Lelemsis, whose older brother Dominic, a senior, also comes. "Usually, whichever one of us gets to school first gets in line and then signs us both up. There's always a huge line coming out of the office -- big traffic in the hallway -- because so many kids are so passionate about this."

"It's such a community and bonding experience with our whole generation, and showing people that we are the pro-life generation," she told The Catholic Spirit, newspaper of the Archdiocese of St. Paul and Minneapolis. 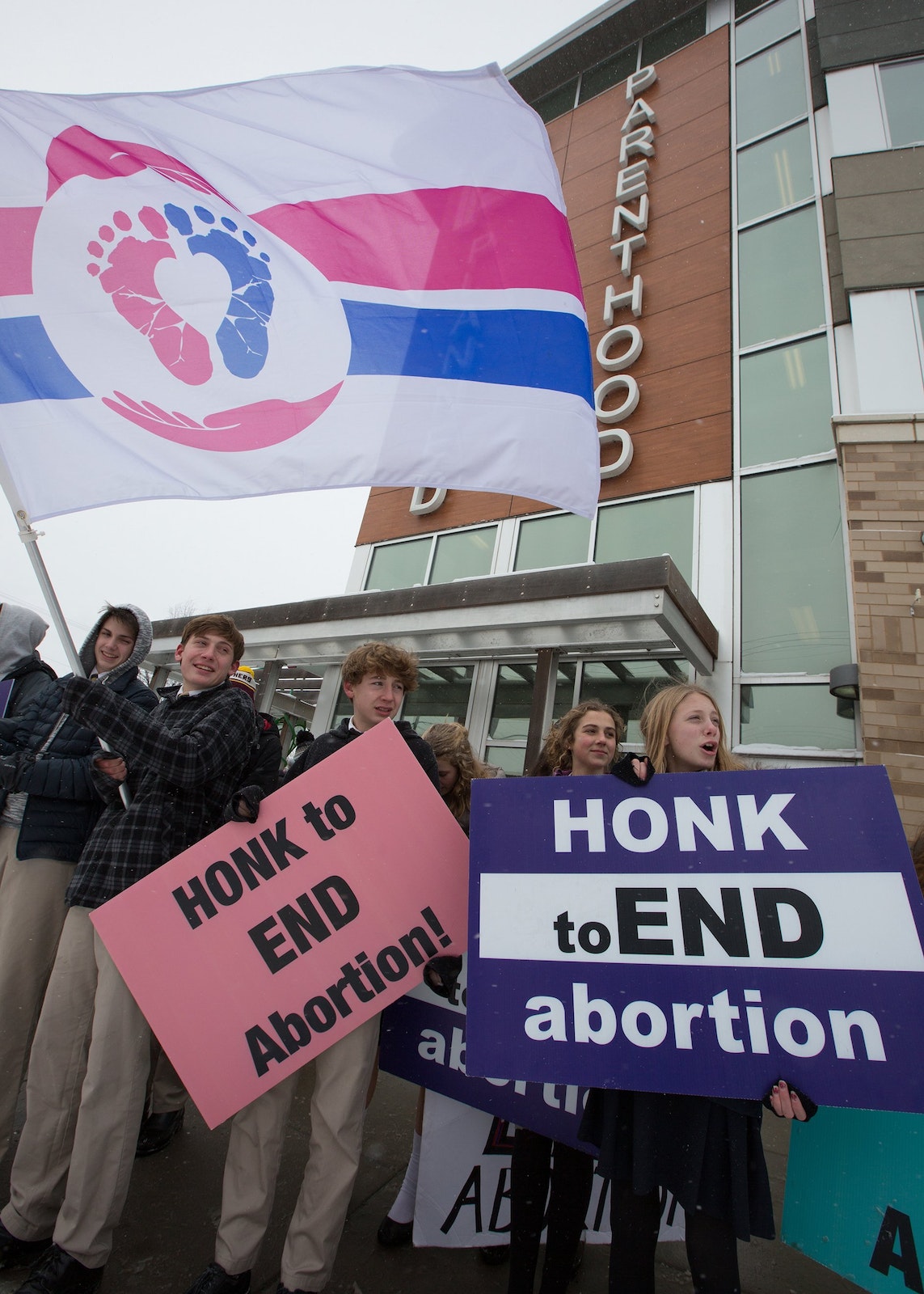 Students from Chesterton Academy in Hopkins, Minn., pray the rosary at Planned Parenthood in St. Paul Jan. 5, 2022. A group of 40 students goes every week to stand up for life at the abortion facility, calling themselves "Crusaders for Life." (CNS photo/Dave Hrbacek, The Catholic Spirit)

The weekly prayer gatherings also express the school motto: "Cultura Vitae" ("Culture of Life"). This is exactly what Dale Ahlquist, school co-founder and current interim headmaster, had in mind when Chesterton Academy opened its doors 14 years ago.

"When we formed the school, part of our mission was to counteract the culture of death," said Ahlquist, whose school, the flagship of the Chesterton Schools Network, has 150 students in grades nine through 12. "And so, we've always had a pro-life charism (at) the school. ... When Kalley came in with this idea, it just resonated wonderfully. I think our only disappointment was that we hadn't thought of it earlier."

At first, only five or six students went every week, Lelemsis recalled. Steadily, the number grew and Yanta had to set a limit due to how many parent-drivers she could recruit every week, plus monitor the students' safety.

Yanta, an experienced pro-life activist and sidewalk counselor, knows that responses can sometimes be negative, and even hostile.

But that does not diminish the students' enthusiasm. They brave not only occasional rude remarks and gestures, but all kinds of weather, including severe cold Jan. 5, with a wind chill below zero, just weeks ahead of Jan. 22 -- the 49th anniversary of Roe v. Wade, the U.S. Supreme Court decision that legalized abortion nationwide.

The gathering is all part of an effort to be, as Yanta described, "on the front lines, literally, of the greatest spiritual battle of all time."

"It's so cool," said Yanta, 56, a mother of six whose son Kolbe, a Chesterton junior, attends the weekly gatherings, as does her husband, Jon. "I love it so much because it gives our kids an opportunity to be bold, to be the hands, the feet, the hearts, the voices, the ears, the eyes, the love of Christ on the sidewalk for these babies and their mamas."

She thinks one of the main reasons Crusaders for Life is so popular with Chesterton students is the feeling of empowerment that comes with making the half-hour trip to Planned Parenthood every week.

"Teenagers often feel like there's nothing they can actually, tangibly do to make a difference in the world," she said. "But this is very tangible, especially among people like them who understand the power of prayer."

Sophomore Thomas DeReuil went for the first time last April. He learned later that, while the group was there, two different cars pulled into the facility, each with an abortion-minded woman inside.

Both cars later drove out, and people inside the car told Chesterton students they changed their minds about abortion and decided not to go through with it because of the students' presence there.

"That just really hit me," said DeReuil, whose older brother John Paul, a senior, also goes to the rosary gatherings. "They're real lives and you're actually saving them. It's just so powerful and crazy."

One byproduct of the event is the chance for people from all four grade levels at the school to get to know each other.

All are on equal footing on the sidewalk in front of Planned Parenthood, and freshmen through seniors enjoy and appreciate the chance to pray together in the fight against abortion.

It also brings together parents and students. Jeff Mitchell rearranges his work schedule at his real estate business to come to Chesterton and serve as a driver, along with his wife, Erin.

Sometimes, he leads the rosary, as he did Jan. 5, and often goes with daughters Elizabeth, a junior, and Grace, a freshman. In the parking lot as students gathered before leaving, he sprinkled holy water on students as they passed by, another part of the event.

"It's great," he said. "It's a wonderful thing to serve Christ and to bring that joy and light in(to) the world right now."

Freshman Jack Berg started going in the fall of this school year and tries to make it every week. Occasionally, his older brother Fred also comes. Jack signed up just two weeks into the school year and, like DeReuil, was hooked immediately.

"It was just life changing," he said. "It's my favorite part of each week. I'm so thankful for it and that this school takes the time to do that."

Berg has five siblings, and his mother has had several miscarriages, he said, so he has firsthand experience with both the life and death of unborn children.

"When I see a baby, the amount of joy that comes to my face is unbelievable," he said. "And to think of that life being taken every day in multiple (abortion) clinics all around the world, that's just a dagger in my heart."

Hrbacek is a photographer/reporter at The Catholic Spirit, newspaper of the Archdiocese of St. Paul and Minneapolis.