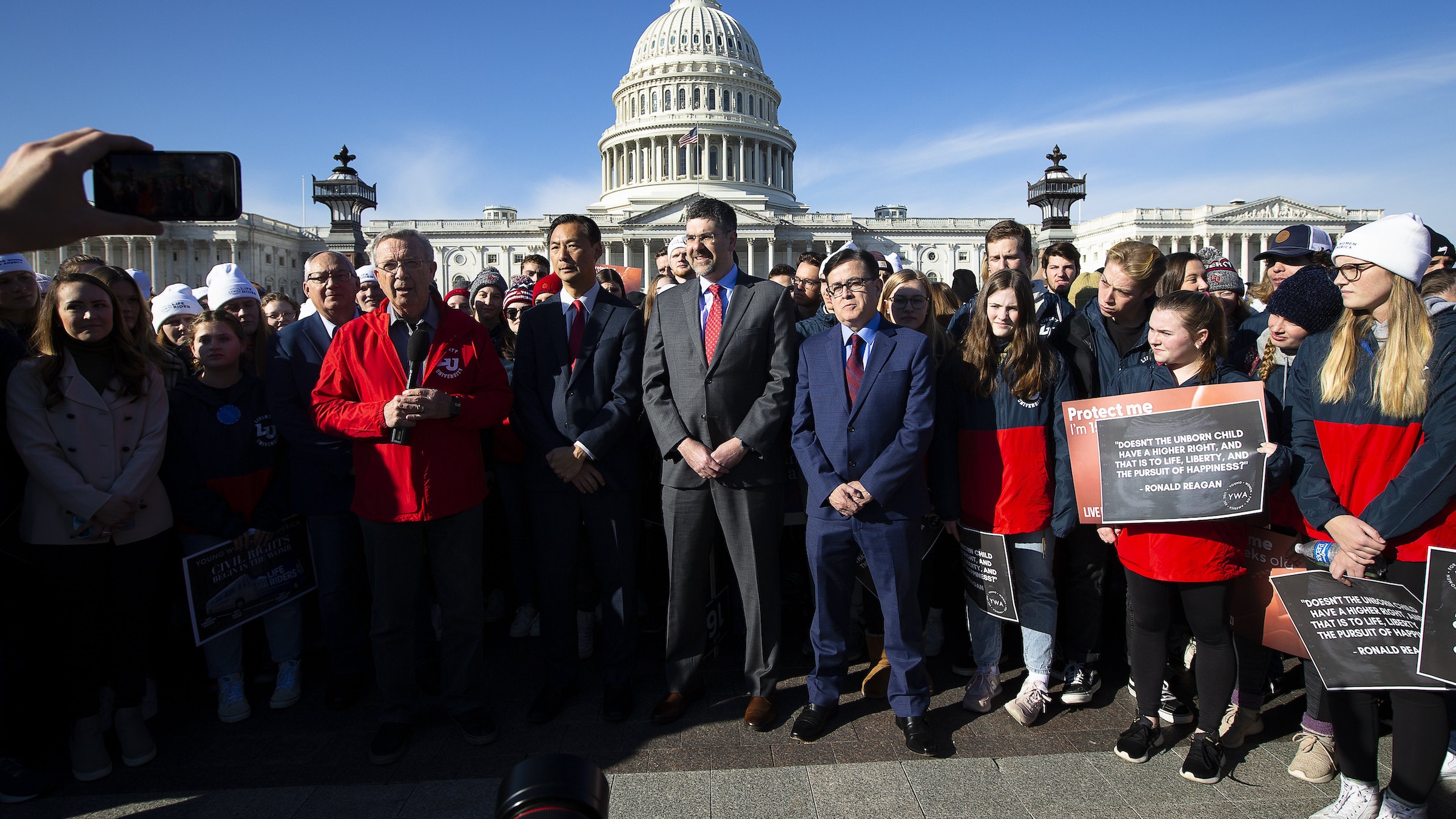 People from Liberty University in Lynchburg, Va,. are seen near the U.S. Capitol in Washington Dec. 1, 2021, the day Supreme Court justices heard oral arguments in a case about a Mississippi law that bans abortions after 15 weeks of gestation. (CNS photo/Tyler Orsburn)

WASHINGTON (CNS) -- The chairman of the U.S. bishops' pro-life committee Dec. 1 urged Catholics, people of other faiths and all people of goodwill to unite in prayer that the U.S. Supreme Court will overturn Roe v. Wade in its eventual ruling on Mississippi's ban on most abortions after 15 weeks of pregnancy.

His statement was issued the same day the court heard oral arguments in Dobbs v. Jackson Women's Health Organization, an appeal from Mississippi. Its ban was struck down by a federal District Court in Mississippi in 2018 and upheld a year later by the New Orleans-based U.S. Court of Appeals for the 5th Circuit.

The Mississippi law is being challenged by the state's only abortion facility, the Jackson Women's Health Organization. It's the first major abortion case the court has heard in decades.

"In the United States, abortion takes the lives of over 600,000 babies every year," said Baltimore Archbishop William E. Lori, chairman of the U.S. Conference of Catholic Bishops' Committee on Pro-Life Activities. "Dobbs v. Jackson Women’s Health could change that."

"We pray that the court will do the right thing and allow states to once again limit or prohibit abortion, and in doing so protect millions of unborn children and their mothers from this painful, life-destroying act," he added. "We invite all people of goodwill to uphold the dignity of human life by joining us in prayer and fasting for this important case."

If the court's ruling, expected in July, upholds the ban, it possibly also could overturn Roe and send the abortion issue back to the states to decide laws on it.

Archbishop Lori directed people to www.prayfordobbs.com for Catholic and ecumenical prayers and resources for community engagement and action "as we await the court's decision in this case."

Pro-life advocates and supporters of keeping abortion legal gathered outside the Supreme Court rallying for their respective positions on the issue as the justices heard oral arguments in the case inside the court.

Beyond the court building's steps, statements about the Mississippi law and predictions about the outcome of the case came from all quarters.

U.S. Sen. Jeanne Shaheen, D-N.H., predicted there would be "a revolution" if Roe v. Wade is overturned.

Shaheen, who is on record as a supporter of widespread access to abortion, said that young people in particular would find it unacceptable if the court strikes down the legal precedent set by Roe in 1973 legalizing abortion nationwide.

U.S. Rep. Rosa DeLauro, D-Conn., called on the Senate to Pass the Women's Health Protection Act. The measure, passed by the House Sept. 24, codifies Roe and establishes the legal right to abortion on demand at any stage of pregnancy in all 50 states under federal law.

"The Mississippi case brought before the Supreme Court is a product of Republican attacks on reproductive rights spanning decades," said DeLauro, a Catholic. If Roe is overturned, the court will be "depriving individuals across the country of their right to choose to have an abortion," she said.

Many pro-lifers hoping Roe will be overturned emphasized how many scientific advances have been made in the nearly 50 years since that decision was handed down, advances they argued that have led to unprecedented information on the developmental stages of the unborn child from conception to birth.

Father Frank Pavone, national director of Priests for Life, pointed to what he called the "utterly weak and time-worn arguments" that he said were made by Justices Stephen Breyer, Elena Kagan and Sonya Sotomayor, considered the liberal members of the court.

Among their comments was Sotomayor's claim that only "fringe" doctors believe in the existence of fetal pain as a reason to restrict abortion.

"They do not acknowledge that the changes in science are real, or that the confusion thrust upon judges and legislators by the court's approach to abortion is also real," Father Pavone said in a statement.

"These and other objective reasons have led us to the day when Mississippi, and other states, believe it is time to enact stronger protections for the unborn, and for unelected judges to stop imposing policies that the legislatures should be responsible for instead," he said.

At the rally outside the court, Grazie Pozo Christie, a radiologist and a senior fellow with The Catholic Association, similarly commented that "incredible advances in science and fetal medicine have rendered viability a totally incoherent legal standard."

"Science and common sense tell us children in the womb are as undeniably human as the rest of us," remarked Brian Burch, president of CatholicVote, an independent political advocacy group. "We know for instance that by 15 weeks they already have beating hearts, can suck their thumbs, and even feel pain."

"It is time to overturn Roe and allow Americans to once again pass laws that reflect these basic values,” he said in a statement.

He added that "millions of faithful Catholics across the nation are hopeful after today’s oral arguments that the Supreme Court of the United States will restore sanity to its abortion jurisprudence which has enabled over 62 million American children to be aborted since 1973 when Roe v. Wade was decided."

"Protecting innocent life is the preeminent moral issue for Catholics but it is also the condition of any just society, and abortion robs our most vulnerable citizens of that most basic human right," Burch said.

Not all eyes on the court were in the nation's capital.

In Illinois, Tom Brejcha, president and chief counsel of the Thomas More Society, said the country has "the first real legal opportunity in over a decade to topple" Roe, which "has left a tragic trail of human carnage: more than 62 million dead children and countless broken families and wounded souls."

He said the Thomas More Society, a public interest law firm, has assisted thousands of clients, including some of the nation's leading pro-life figures, "all of whom have either spoken to the opportunity now facing the Supreme Court or are actively engaged in the cry to 'Overturn Roe.'"

Louisiana Right to Life associate director Angie Thomas said that while no one can predict the outcome of a Supreme Court case on the basis of oral arguments, she was heartened that at least six of the nine justices asked questions that seemed to support Mississippi's ban.

In a news conference outside the pro-life organization's New Orleans headquarters, Thomas noted that Justice Brett Kavanaugh stressed the court should remain "scrupulously neutral" on issues "that are just this complicated and this divisive," allowing those issues to be decided by individual states and their elected representatives.

"Alito mentioned that the fetus has an interest in life, too, when the other side was talking about the women's interest," she said. "He mentioned how there are two interests there that actually are difficult to hold together."

"These justices are really digging into the difficult issues of where there is an objective line of protection (for the unborn child) and how do you truly balance these interests, and should the court even be doing that?" Thomas said after the news conference. "It's more important that the Supreme Court just remain neutral and allow the states to work this out."

"New York is going to be very different than Louisiana, but it is the power of the people to make that decision," she told the Clarion Herald, newspaper of the Archdiocese of New Orleans.

Thomas said advances in science have proven beyond a shadow of a doubt about the humanity of the unborn child from its earliest stages.

"At 15 weeks, the child is moving, the child has a beating heart and the child's organs are formed," she said.

"We have the chance to protect that child. ... We could have a significant change in abortion law in America today," Thomas added. "And, if that change happened, in Louisiana we are ready to be a post-Roe, abortion-free community where women are truly helped and babies are protected."