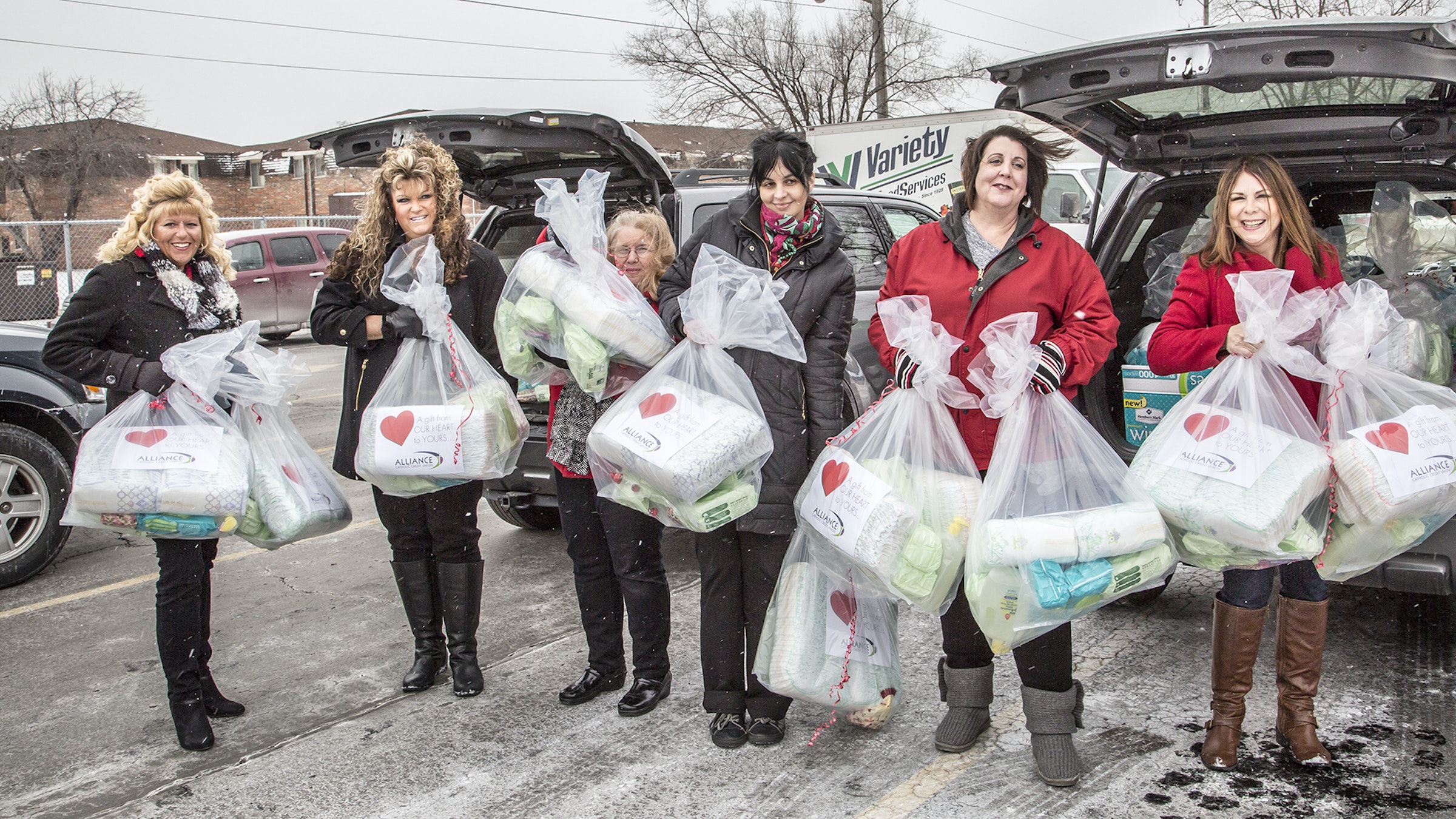 ROYAL OAK — Project Hope will still serve mothers in need, but with a cut in state funding, the pregnancy resource center’s impact has been greatly reduced.

Project Hope is a ministry of Catholic Charities of Southeast Michigan (CCSEM), established to assist expecting and new mothers with supplies such as diapers, wipes, bottles, baby clothes and car seats, along with one-on-one counseling.

The ministry had locations in Royal Oak, Clinton Township, Pontiac and Detroit, where women in crisis pregnancies could go for assistance, free of charge.

But after state budget cuts to Real Alternatives, the Pennsylvania-based nonprofit that funded Project Hope, the pro-life program is facing steep reductions.

Project Hope has closed its Royal Oak and Clinton Township locations, incorporated its Pontiac location into CCSEM’s Hispanic Outreach Services and is maintaining its Detroit Corktown location for 20 hours a week, a move that became necessary after Michigan Gov. Gretchen Whitmer issued a line-item veto to the $700,000 Michigan's Legislature approved for Real Alternatives, which funded Project Hope’s $60,000 annual budget.

“We want to continue the services we provide, but with the funding cuts, we have to reduce the size of the program for the time being,” Andrea Foley, chief program officer and director of behavioral health at CCSEM, told Detroit Catholic. “We had to end the full-time position for the program. We’ll have a part-time counselor in the Detroit location, and our Hispanic Outreach Services program absorbed the Pontiac location.”

Foley said Catholic Charities is keeping its options open as it seeks alternative sources of funding for Project Hope. For now, the counseling aspect of the program has been reduced, but CCSEM will continue to collect and distribute baby items.

“The funding we had was supporting the counseling piece of Project Hope,” Foley said. “That allowed the pregnant moms to come to us for free. Since there is no funding for that, we can’t support that position. The part-time position in Detroit is still providing that counseling, as is the center in Pontiac, but we won’t be doing that in Clinton Township and Royal Oak.”

Project Hope had one coordinator on staff, some interns and volunteers to manage the four locations, but absent the Real Alternatives funding that was cut during a budget standoff between the Michigan governor and legislature for the 2019-20 fiscal year budget, CCSEM could not maintain Project Hope’s scope of care.

“We knew unless the funding was restored, we wouldn’t be able to fund the (counseling) program,” Propson said. “It wasn’t an option to stop helping women who are having babies, who need assistance. So we had to consider how we were going to continue.”

Paul Propson, Catholic Charities' president and CEO, said he learned of the cuts on Oct. 1 while in a meeting with Dawn Still, then-project services coordinator for Project Hope.

“We knew unless the funding was restored, we wouldn’t be able to fund the (counseling) program,” Propson said. “It wasn’t an option to stop helping women who are having babies, who need assistance. So we had to consider how we were going to continue.”

Without the $60,000 from Real Alternatives, CCSEM would have to rely on the generosity of the local Catholic community, including next weekend's archdiocese-wide annual collection.

“We’ve always had great support from the Catholic community, and that allows us to continue the donation side of the program,” Propson said. “We have people giving diapers, clothing, wipes, car seats and cribs to families in need. We don’t want that to stop.”

Since 2013, the state of Michigan has annually allocated $700,000 to Real Alternatives, a Pennsylvania-based nonprofit that supports pro-life service providers in three states. It was in 2013 when Project Hope was started.

During budget negotiations for the 2019-20 fiscal year, the legislature once again approved funding for Real Alternatives, but Gov. Whitmer issued a line-item veto to Real Alternatives funding as part of 147 line-item vetoes and budget transfers that totaled nearly $1.6 billion of the state’s $59 billion budget.

The 2019-20 fiscal year budget has been signed, and negotiations continue about potential supplemental budget. But the Democratic governor and Republican legislature remain at odds.

Still, who served as the bridge between Project Hope and mothers in need, said the ministry offered mothers and expectant mothers valuable knowledge and resources until the child turned 1.

“When a client came in, they ranged from nervous to down-right scared,” said Still, who has a master’s degree in social work. “We had people who didn’t want to ask for help, but they needed it. For some, it’s just a little awkward for them. We tell them we are all equal in this, and we all need help from time to time.”

In addition to the counseling, Still would give each client a box of diapers and wipes and sometimes an outfit or formula, pending donations and supplies.

But the counseling aspect of Project Hope set the program apart, Still said.

During the initial budget negotiations, the Michigan Catholic Conference worked with legislators in both parties. Dave Maluchnik, director of communications for the conference, called the work of Real Alternatives and its service providers a “game changer” in caring for women facing pregnancies.

Since Real Alternatives began working with the state of Michigan, more than 9,000 women have made a total of 33,000 clinical visits across the state, Maluchnik said.

As funding remains an unknown, Catholic Charities is pressing forward, allocating its resources to do the most good with what it has.

After discussing the impact of the cuts — Real Alternatives' funding officially ended Sept. 30 — Foley and Propson elected to keep Project Hope's Detroit location open at the Cabrini Clinic at Most Holy Trinity Parish, while moving resources into its Hispanic Outreach Services location in Pontiac.

“We wanted to make sure that if we had to make any cuts, we tried to avoid cutting the most vulnerable communities we serve, as much as possible,” Foley said. “We tried to keep service in Detroit and Pontiac, where many of the clients we serve are very low income with few resources available to them.”

People can still drop off diapers, wipes, bottles, baby clothes and car seats at any of the four previous locations.

Propson said the donation collections will be heavily dependent on volunteers, and Still, who formerly worked exclusively on Project Hope, will transfer to Catholic Charities' foster care and adoption department.

Propson said Catholic Charities will undertake a “moment by moment evaluation” of its resources. “We’re adjusting for the loss of funding, but we won’t know probably for six months what the program will look like,” Propson said.

Meanwhile, Catholic Charities is encouraging parishioners to support its annual appeal, which will collect monetary donations at parishes in the Archdiocese of Detroit the weekend of Nov. 23-24.

“We have our appeal right now, so people can contribute to the program, and we can help more when we gather more,” Propson said, adding he hopes with additional donations to bring on additional part-time staff.

“We’re really heartbroken that the funding was cut for this program,” Foley said. “It’s a shame we can’t offer this anymore, because of politics.”

As legislators in Lansing continue to debate potential supplemental budgets, Foley encourages those in power to examine the good in supporting services such as Project Hope and Real Alternatives.

“This is program that’s never been a polarizing program, and it doesn’t have to be,” Foley said. “It’s about providing assistance with human compassion, and resources to strengthen families so they can have healthy babies and healthy mothers. For that small amount of funding, $700,000, the payoff is tremendous.”

Catholic Charities of Southeast Michigan's annual appeal weekend is Nov. 23-24. Donations, which will be collected at parishes across the Archdiocese of Detroit, support services to more than 20,000 people annually at 14 locations across southeast Michigan. To learn more, visit ccsem.org or call (855) 882-2736.