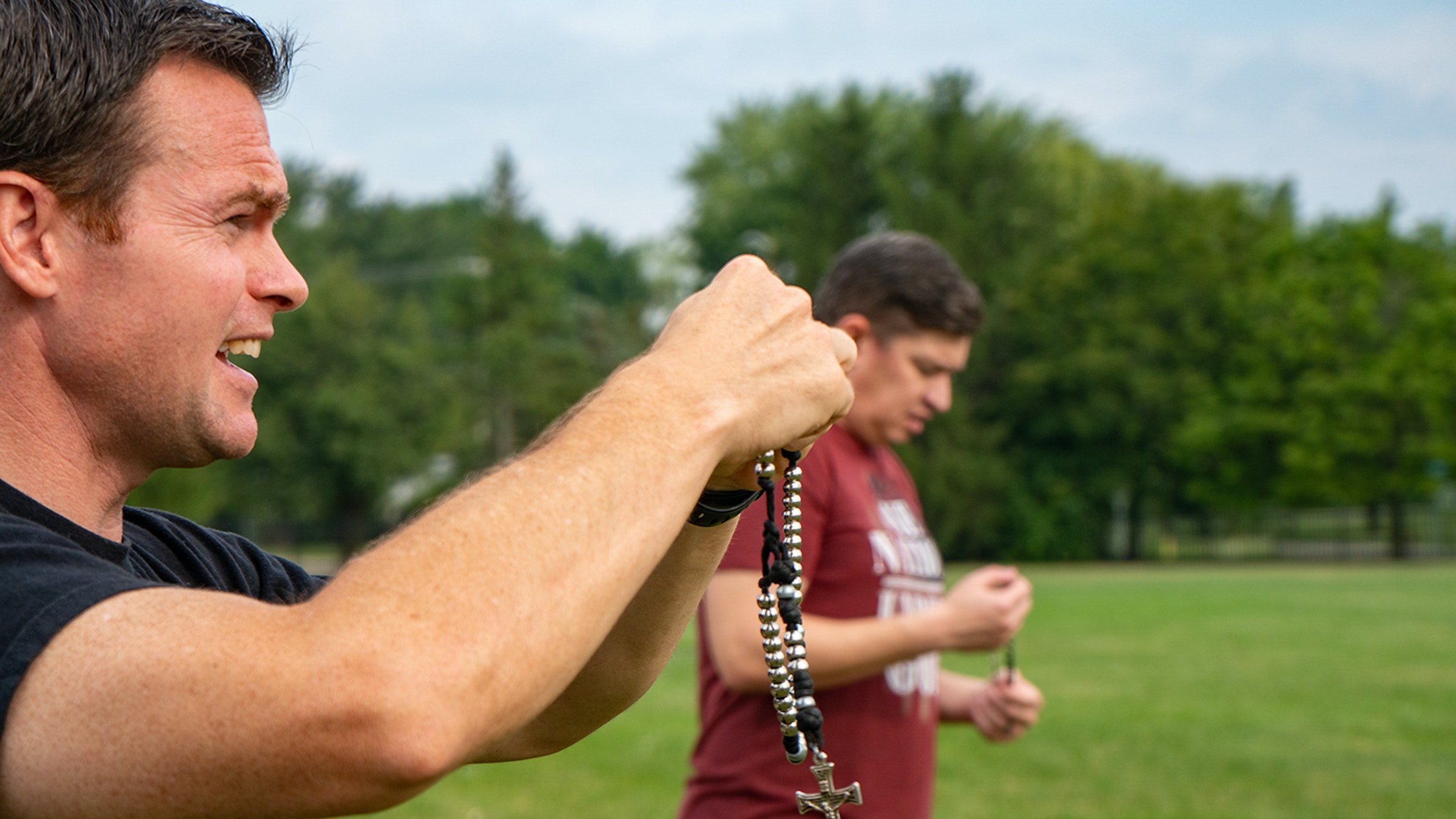 Dan Wolocko, left, and Kyle Redding lead a group of middle school boys in a workout and rosary Aug. 20 at Our Lady of Sorrows Parish in Farmington. The pair leads the parish's new youth group for boys, "Exercitus Mariae," which means "Army of Mary" in Latin. The group's goal is to form young boys to be leaders in their faith by giving them opportunities to put their faith into action. (Photos by Matthew Rich | Special to Detroit Catholic)

FARMINGTON — It’s Saturday morning, and the sound of footsteps marching in unison reverberates in the parking lot at Our Lady of Sorrows Parish in Farmington. A group of sixth- to ninth-grade boys and a handful of dads move in formation until they reach a series of cones set up in the shape of a cross. One by one, they race through the course, praying aloud as they navigate the sharp turns.

The drills were not part of a military training program or a football conditioning exercise. Rather, they’re a key component at meetings of “Exercitus Mariae,” a new ministry for middle school boys at the parish that launched this month after a pilot program over the summer. "Exercitus Mariae" means “Army of Mary” in Latin.

The program was started at the initiative of parishioner Dan Wolocko, who noticed in his work as a sports physical therapist that young men sometimes place more meaning in sports than in Christ. 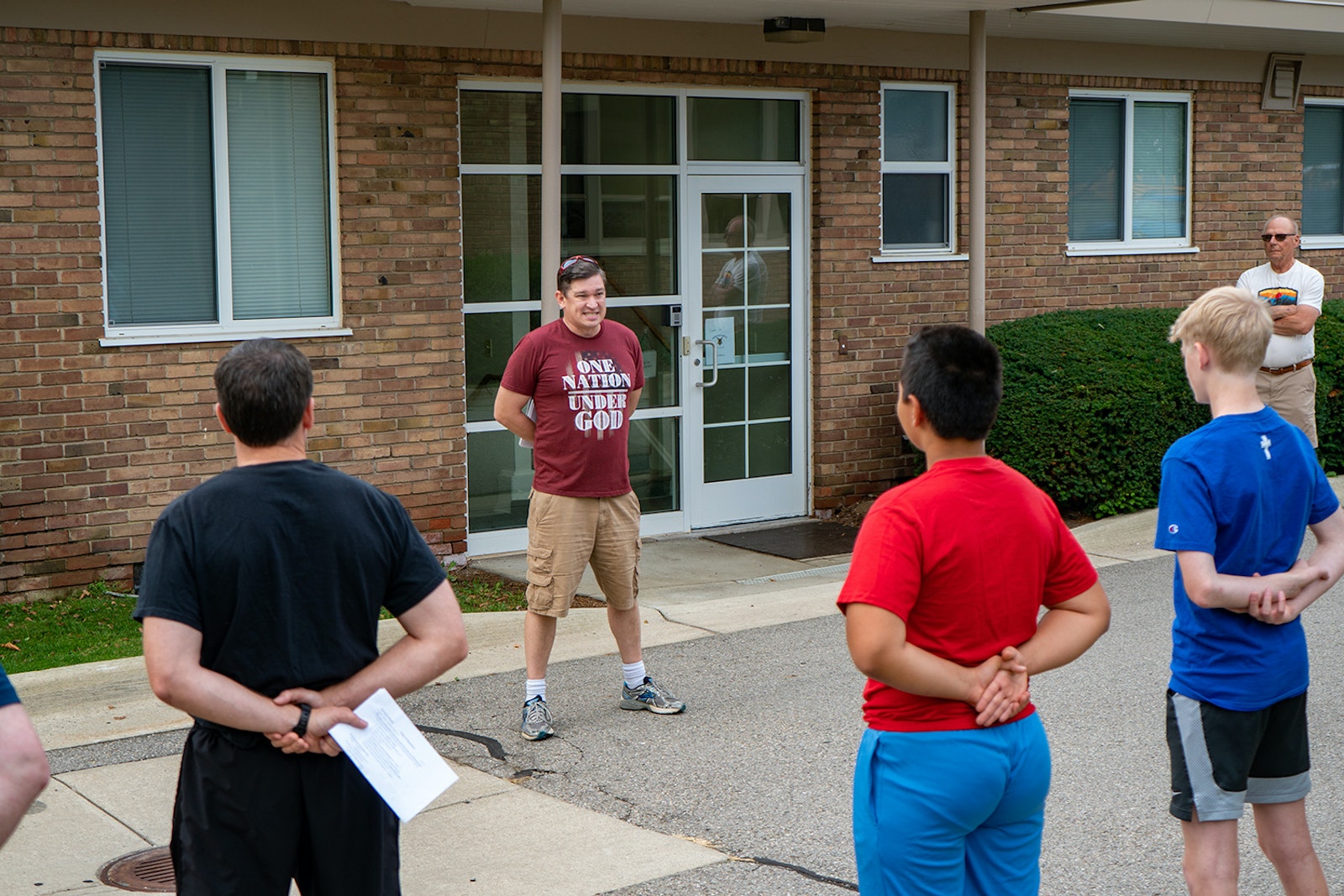 Kyle Redding, a parishioner of Our Lady of Sorrows Parish in Farmington who served in the U.S. Army from 2004-12, addresses a lineup of boys during an "Exercitus Mariae" youth group meeting Aug. 20. In addition to middle school boys, fathers are invited to attend alongside their sons.

Wolocko, director of TrinityElite Sports Performance with Trinity Health, recognized that middle school is a pivotal time of development for boys and came up with the idea of a program to empower young men to become protectors and leaders in the Church with Mary as their commander-in-chief.

“Boys and men aren’t being asked for help in our society. They don’t feel valued,” Wolocko said. “We want to form young men to learn about their faith and the domestic Church so that they are ready to respond when they’re asked to help. We know there’s a battle for souls. Satan is real, and the rosary is our weapon.”

Heather Soderquist, who took over as director of youth discipleship at Our Lady of Sorrows in October 2021, welcomed the unique approach to faith enrichment. Soderquist had already been making plans to launch BLAZE, a program for middle school girls, and had been praying for a way to engage middle school boys. 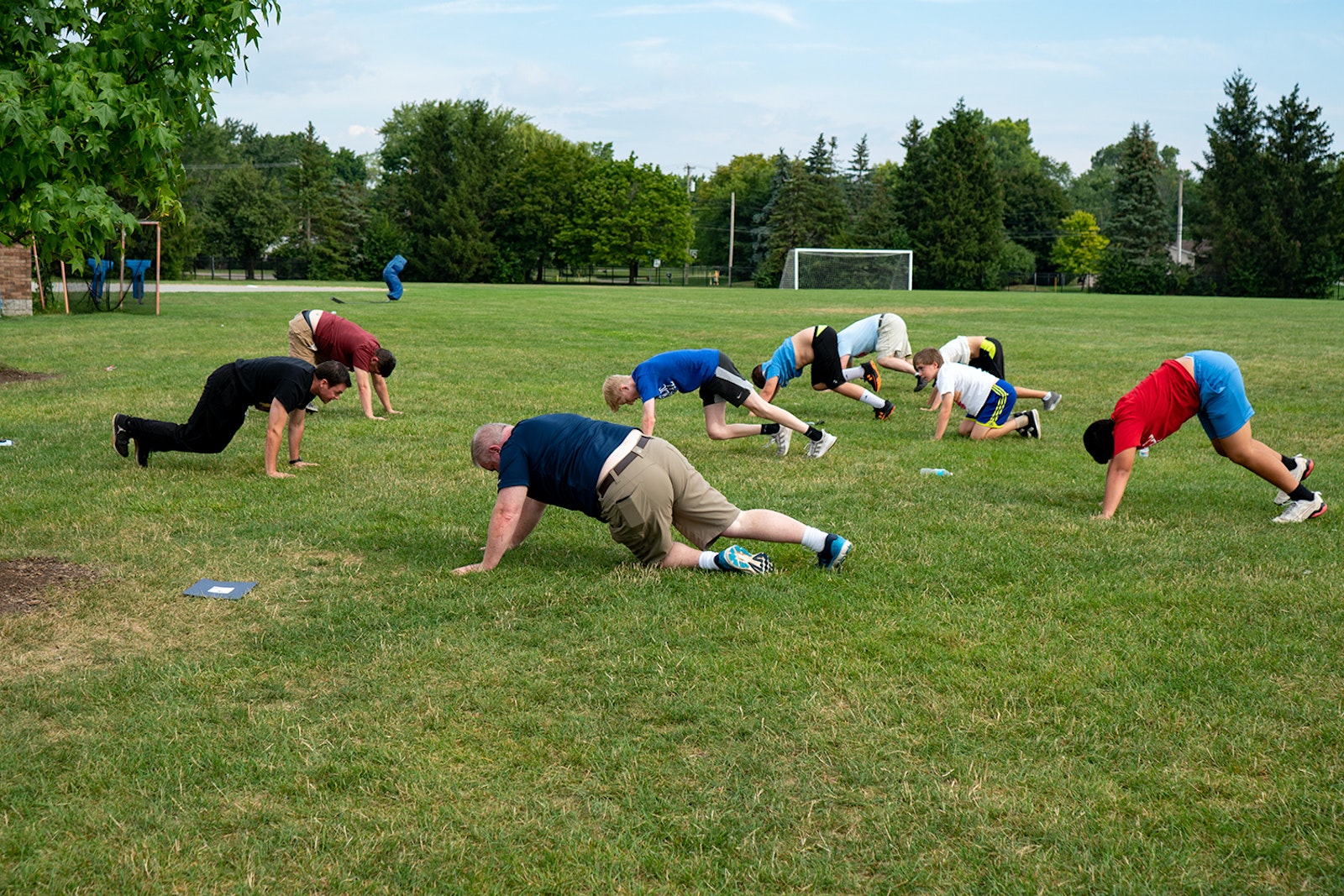 Boys and leaders of the "Exercitus Mariae" youth group do push-ups while praying the rosary Aug. 20. By combining workouts with prayer, leaders say they hope to instill a sense of personal and faith discipline in their young charges.

“Traditionally, faith formation takes place in school or religious education in a classroom setting,” Soderquist said. “With our youth group, I want to offer faith enrichment that touches on topics that are of particular interest to them, that they look forward to, and that will help them form a community. We want to build relationships in middle school so that they are comfortable in their faith community going into high school and will continue to seek opportunities to grow in their faith after confirmation.”

Wolocko envisioned a military element to Exercitus Mariae, focusing on improving physical strength and testing one’s physical limits. He invited Kyle Redding, a fellow member of the Our Lady of Sorrows men’s group and Knights of Columbus council, to join him in shaping and leading the new ministry. Redding served in the U.S. Army from 2004-12, and the idea of building a new faith-based program for boys and their fathers appealed to him.

“My father did a great job raising me, and when I think back to my middle school years, I would have liked to have had something like this where my dad and I could have built our relationship and our faith at the same time,” Redding said. 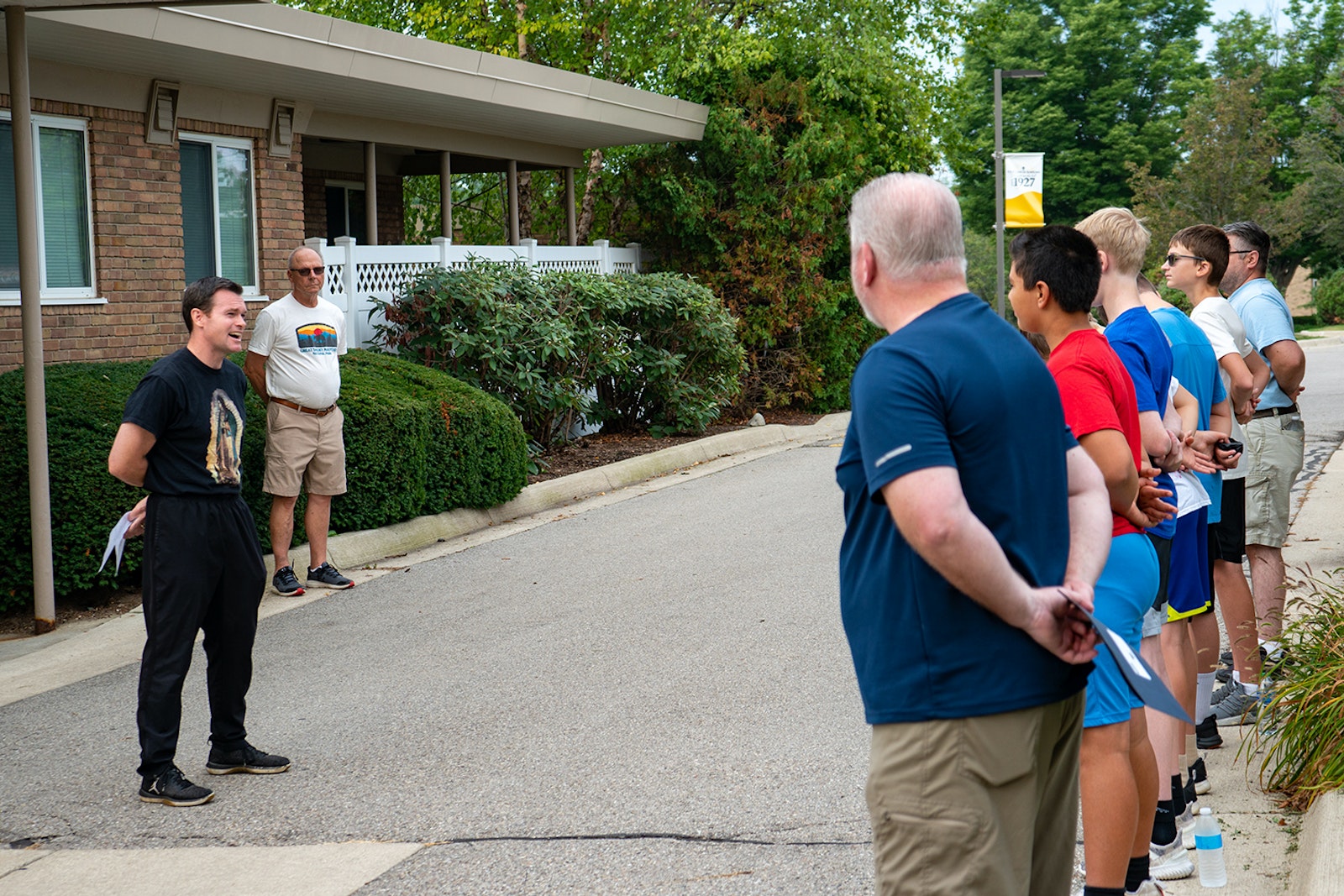 Dan Wolocko address the group of dads and boys Aug. 20. Wolocko, director of TrinityElite Sports Performance with Trinity Health, said he came up with the idea after noticing many boys tend to have a greater devotion to sports than to their faith.

Fr. Walter Ptak, who leads the Our Lady of Sorrows community, supported Exercitus Mariae from the moment Soderquist pitched the program to him.

Timmy Burke, a freshman at Detroit Catholic Central High School who plays hockey and baseball, attends Exercitus Mariae sessions with his father. Though fathers are not required to participate, they are invited to attend meetings alongside their sons.

“When my dad told me about it, I was excited to check it out,” Burke said. “So far, it’s been keeping me on track with my faith and helping me stay in shape physically and mentally. It’s been a lot of fun to do it with my dad, too.”

The Burke duo has begun a Saturday morning tradition of attending Exercitus Mariae followed by breakfast at a restaurant. Not only are they hungry because of the morning workout, but they also enjoy the father-son time to catch up and to process what they learned. 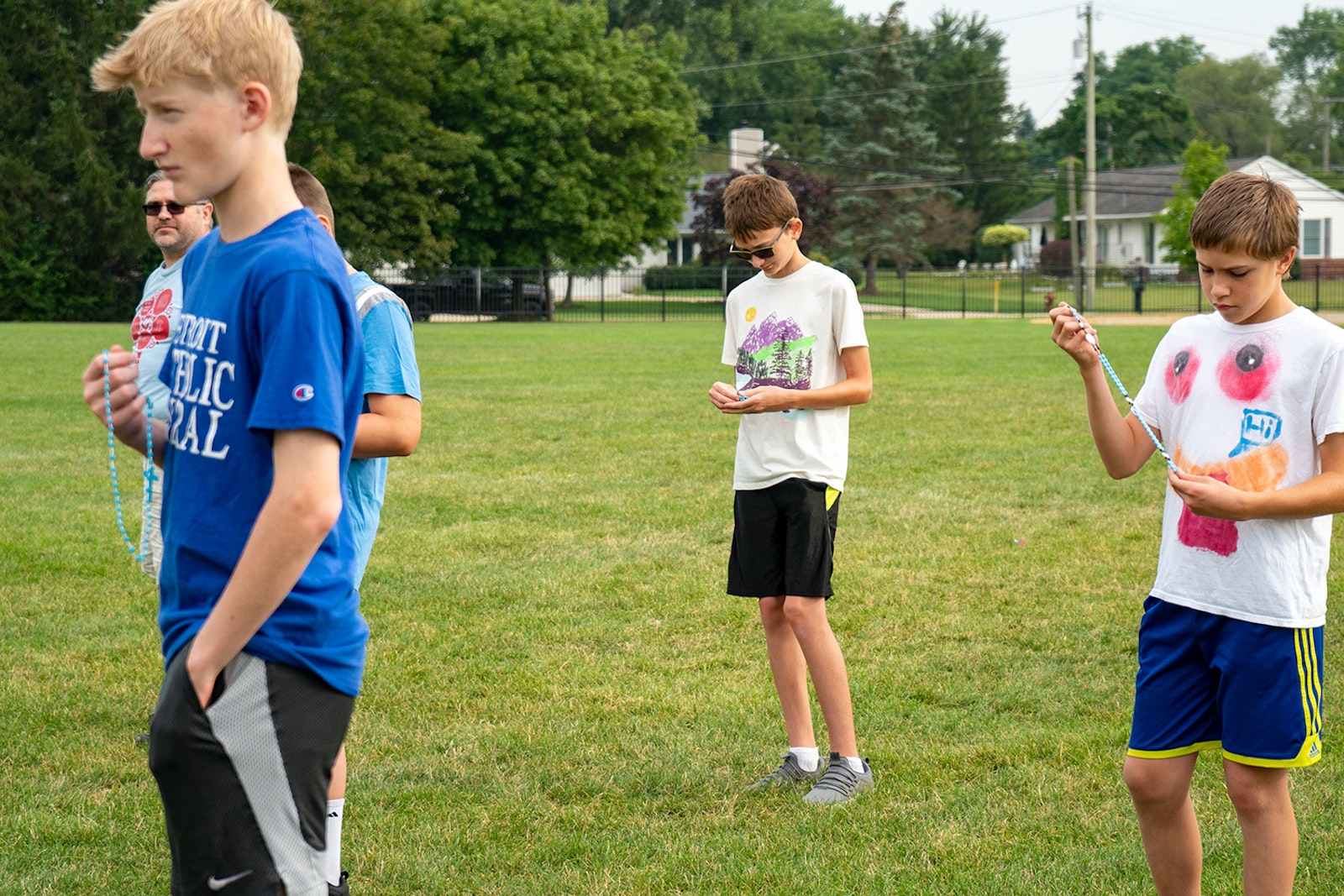 Members of the "Exercitus Mariae" group pray the rosary as they prepare for workouts Aug. 20. Often, boys attend the meetings with their fathers, sharing what they've learned about their faith.

“We’ve gotten even more out of it than I anticipated, me as a 54-year-old man and my son at 14 years old. It’s been great having this experience together and learning what it means to be a man of Christ,” said Timmy’s father, Tim. “My hope is that more people will experience it. It helps young men see that every day is an opportunity to live the Gospel in an imperfect world.”

Wolocko and Redding hope to see the program grow and expand to other parishes in the Archdiocese of Detroit. One day, they pray, the Army of Mary will be on guard everywhere.

“Modern culture has drifted a long way from our values as Catholics and Christians. There’s a battle within boys at these ages to decide if they want to be part of modern culture or part of God’s family,” Redding said. “We’re trying to give them the strength and the tools that are needed to overcome the assault on their faith. I think it’s important for boys not only to have bonds with their fathers, but also to have strong bonds with other boys who have the same values and life goals, and we’re working to build those.”

To learn more about the Exercitus Mariae program, go to www.olsorrows.com/MiddleSchool.