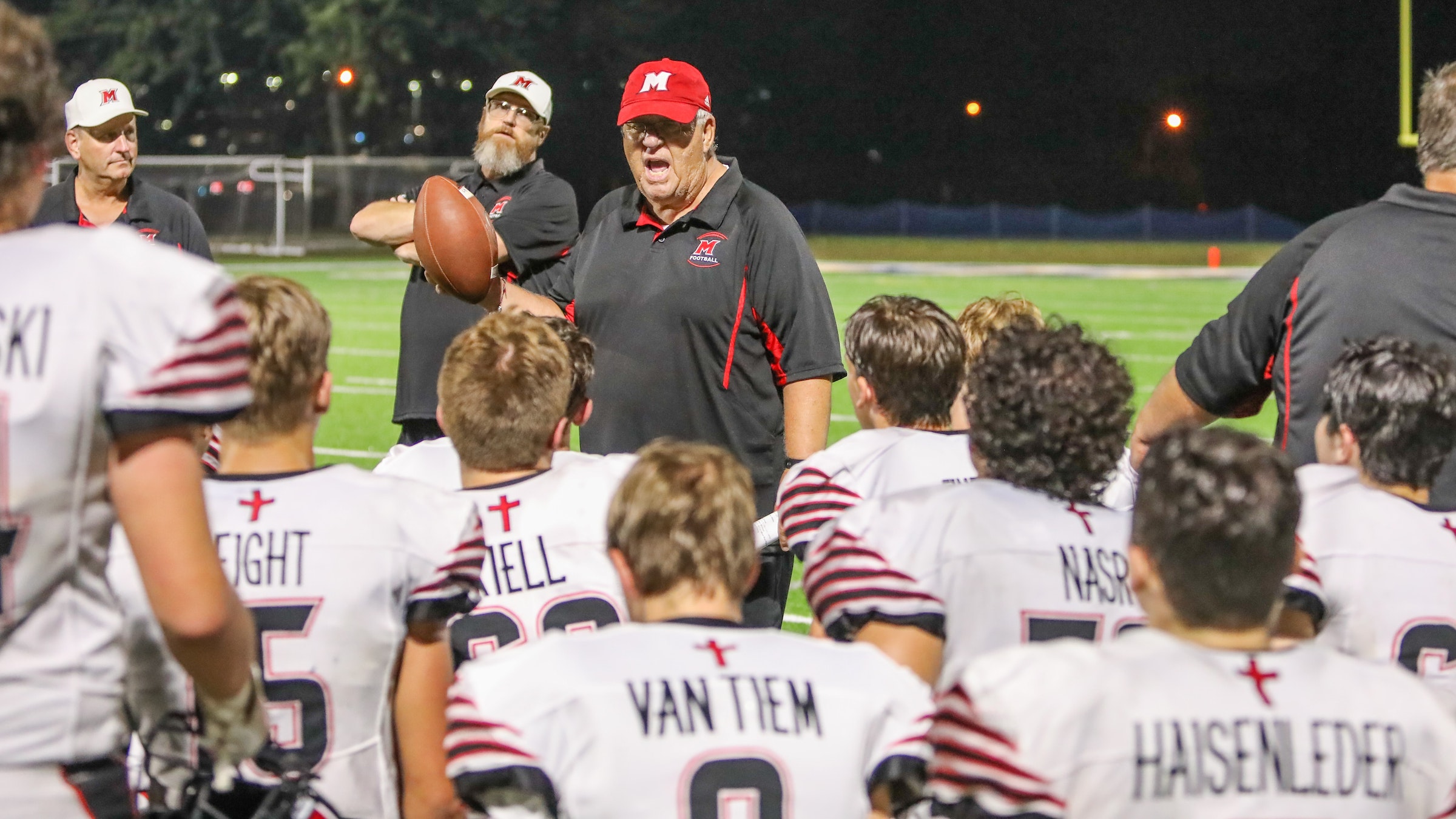 Joe Quesnelle turned around the Cardinal Mooney’s gridiron fortunes, topped off by winning the CHSL Intersectional II title in 2022, playing at Ford Field in the Prep Bowl for the first time since 2001, and qualifying for the MHSAA post-season playoffs three years in a row. (Photo provided by Lindsay VanTiem Photography)

NEW BALTIMORE — Joe Quesnelle laughs when you ask him about his high school football career.

So, he did the next best thing: he became a coach, doing so with distinction for 42 years until announcing his retirement at the conclusion of the 2022 season.

Quesnelle (French; pronounced kah-knell) did a couple of end runs before he kicked off his coaching career. He dropped out of Harper Woods Bishop Gallagher High School at the end of his junior year in 1971, married Kim Komara six months after she graduated from Servite on Dec. 2, 1971, and eight days later shipped out on a two-year stint with the U.S. Navy.

Joe and Kim are in the 51st year of their marriage. “She is a great woman, a great mother and a great grandmother,” he says. Their union produced three sons and a daughter — all went to Gallagher — and seven grandchildren.

Back home, while holding down a variety of jobs over the next 10 to 12 years, Quesnelle earned a pair of associate's degrees at Macomb Community College, a master’s in finance from Walsh College and a master’s in education at Wayne State. At age 40, he began teaching accounting and finance in the Detroit Public Schools for 20 years before retiring about a decade ago.

While all of this was going on in his life, Quesnelle started his coaching career in 1980 at the CYO level at Roseville St. Angela. “The last year (in 1986) we played St. Scholastica for the championship at the Silverdome,” he says. “We lost. But then we found out they used a couple of 16-year-olds, so we were later declared the champions. I don’t know if it ever was made official.”

Bishop Gallagher coach George Sahadi heard Quesnelle was interested in moving up to the high school level. “He asked me to ‘C’mon in and we’ll talk.’”

That invitation turned out to be a pivotal moment in shaping Quesnelle’s coaching philosophy.

“He sat there for an hour and we barely talked about X’s and O’s and football. He talked about our responsibility. He said, ‘Our report card doesn’t come in until 10 years after they graduate.’ What kind of men did we put out? Did we put out men who were hard working?" Quesnelle recalled.

“That’s one thing about football. You have to put in the work. You have to be responsible. Responsible for everybody on the team. In other sports, you can be a superstar but don’t have to play in the team concept. In football you have to be the whole package. It takes 11 guys to get that ball over the goal line.”

Quesnelle assisted at Bishop Gallagher from 1986 to 1992, ending on a heartbreaking note when the Lancers lost the 1992 MHSAA Class C state championship, 28-21, in double overtime to Traverse City St. Francis.

“I remember the first preseason coaches meeting I attended,” Quesnelle says. “I walked in and there was Ron Thompson, George Sahadi, George Porritt, Tom Mach, Al Fracassa. On and on. I thought, ‘Holy smoke, what am I doing here?’”

In the 1996 CHSL Prep Bowl, Redeemer faced Royal Oak Shrine for the C-D trophy. “I remember (Shrine coach) John Goddard. We were outside together smoking a cigarette before the game. I was nervous. He was trying to calm me down. Then I go out and beat him 17-6.”

Ten years later, at a CHSL Hall of Fame banquet, Goddard asked Quesnelle to join the Shrine coaching staff. He stayed there for a dozen autumns until 2017, when Goddard was let go. 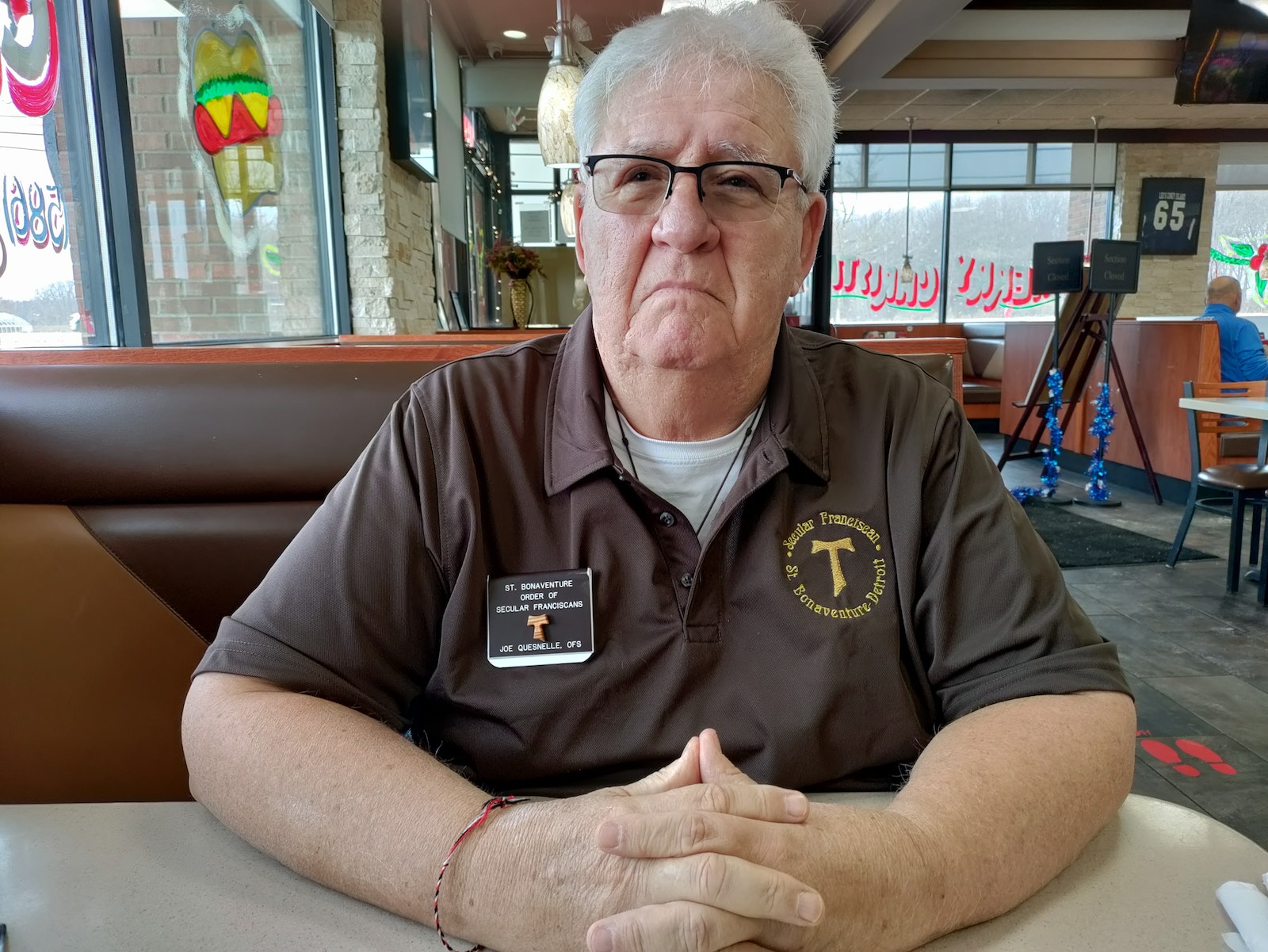 “That was really bad how it happened,” Quesnelle says. “John had been there 25 years, 49 in all in the Catholic League. You never know what’s behind the scenes, but John was told the school wanted to go in a different direction.”

The next year, in 2018, Quesnelle was hired for his second head coaching job, at Marine City Cardinal Mooney.

“That first year, many times I went to bed asking myself, 'What did I get into?' They had tried 8-man football (four years earlier). It was a struggle. The kids felt they were the joke of the school. We were 1-8 that first year. Our only win was a forfeit.”

Quesnelle turned around the Cardinals’ fortunes over the next four years, topped off by winning the CHSL Intersectional II title in 2022, playing at Ford Field in the Prep Bowl for the first time since 2001, and qualifying for the MHSAA post-season playoffs three years in a row.

The revived interest in the Cardinals centered around Brendan Haisenleder, the finest running back Quesnelle has coached in his career. In the broken-field style of Barry Sanders, he racked up combined junior and senior year stats of 3,433 yards (8.7 per carry) and 49 touchdowns. From his safety position on defense, he set school records in tackles and interceptions.

Haisenleder received first team Division 8 All-State honors. He is considering a number of opportunities to play in college.

“I think people are really missing the boat on him,” Quesnelle says. “This kid played hurt all year. People are looking for speed. His speed was down this year because of the injuries. The most humble kid you’d ever want to meet. The ultimate team player.”

Quesnelle implemented ideas from his talk with Sahadi.

“My first year, some of the kids weren’t the students they should have been. So I pushed practice time back and we did a study table for an hour every day," he said. "There was a picnic table near our practice field and when I found out some kids were behind in their studies, they’d have to sit in uniform at the table and do homework while we practiced. The message got through.”

Last fall, Cardinal Mooney was ranked the No. 1 Academic All-State Team in Division 8 for the third year in a row by the Michigan High School Football Coaches Association.

“I’m most proud of that,” Quesnelle says.

“We wanted to build good Catholic young men. George taught me that. He quietly was a very religious man. I didn’t find that out until very late that he would go to Mass every day, at 7:30 in the morning. (Sahadi died in 2006 at age of 62).

“Going to Mass as a team kind of came through at Shrine. We did it at Gallagher (and at Harper Woods Notre Dame, where Sahadi and Quesnelle coached in 2004). It was something I wanted to start when I got to Mooney. Every Sunday we went to Mass as a team. It kind of became a traveling thing because of the different places kids came from.”

“At least for nine weeks,” Quesnelle says, “I knew they were Catholic.”

Of all that goes on in coaching a team, Quesnelle says he’ll miss special moments in practice.

“We had a very spiritual team this year. One of my captains said, ‘We’re going to pray before and after practice.’ One of the players during the season lost his grandfather. One of my assistants, my brother, his daughter, my goddaughter, developed cancer. We always had someone to pray for. So we’d just kneel down and pray,” he said.

Time for a new adventure. Two years ago, he was professed a member of the Franciscan Third Order at St. Bonaventure Monastery in Detroit. “I’ve been Catholic all my life. I punched my ticket every Sunday like everyone else (at St. Mary, Queen of Creation Parish in New Baltimore), but I had a big growth in my faith and wanted more,” Quesnelle says. “I’ll be down at the monastery five or six days a month.”