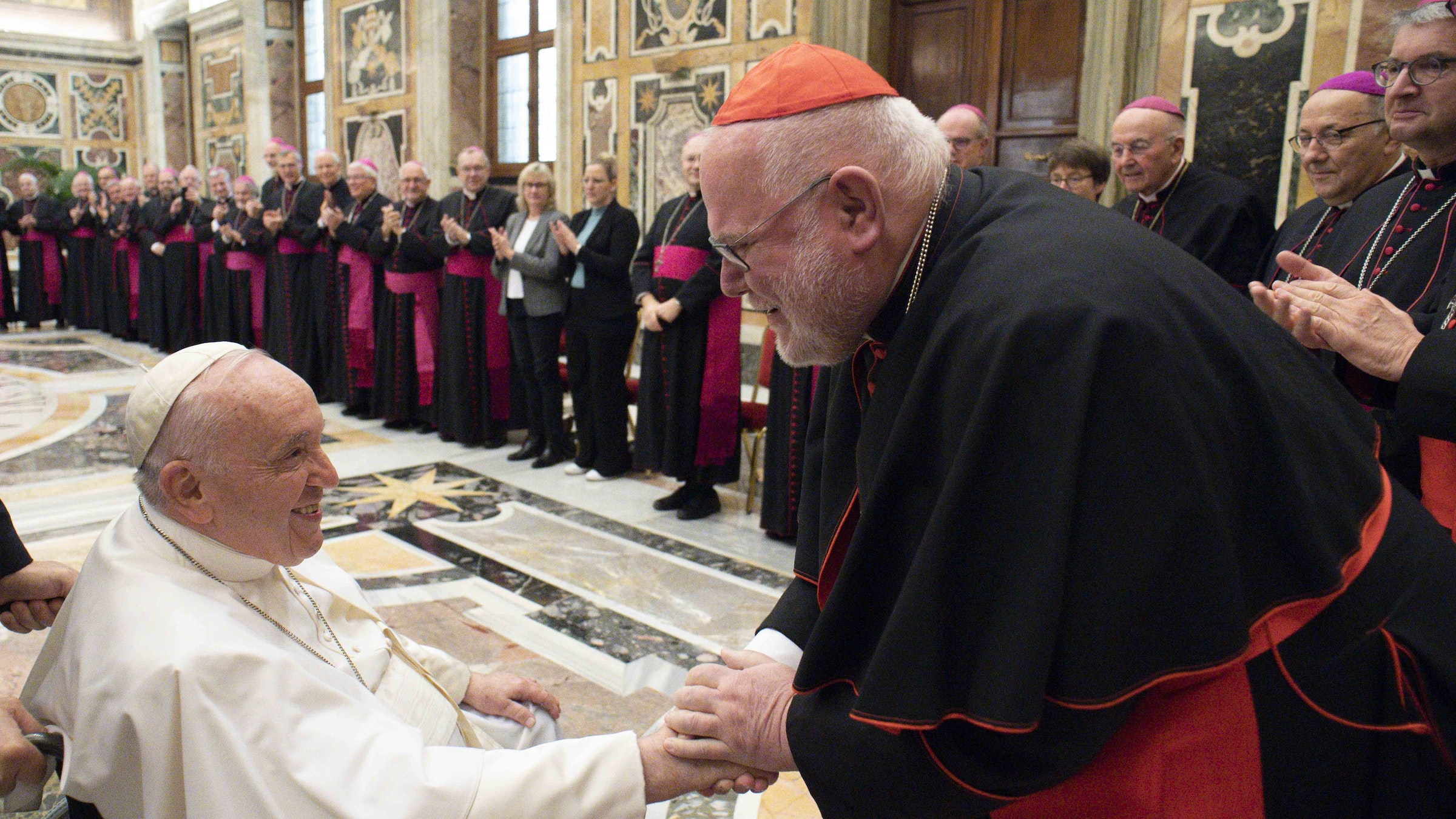 Cardinal Reinhard Marx of Munich shakes hands with Pope Francis Nov. 17, 2022, in the Clementine Hall of the Apostolic Palace during the German bishops' "ad limina" visits to the Vatican. (CNS photo/Vatican Media)

VATICAN CITY (CNS) ─ The "ad limina" visits of the bishops of Germany were unusual in several respects and were dominated by discussion of the German church's Synodal Path.

The pilgrimage to Rome Nov. 14-18 brought 63 German bishops to the Vatican meetings; usually members of such a large bishops' conference would have come to Rome in two or three groups, particularly because Pope Francis likes to spend a couple hours in the library of the Apostolic Palace listening to the bishops, commenting on their concerns and answering their questions.

Instead, the whole group met with the pope Nov. 17 in the much larger Clementine Hall.

The bishops' communication office said the two-hour meeting with Pope Francis still was an open forum "during which the bishops were able to raise their questions and issues, and the pope responded."

While "aspects of the Synodal Path of the church in Germany and the worldwide synodal process" came up, the office said, the discussion also included providing pastoral care to people in changing times, understanding priestly and episcopal ministry, the involvement of laypeople in the church and the challenge of evangelization in an increasingly secularized culture.

"Political responsibility, social cohesion and prospects for peace in the face of global and regional conflicts" also were discussed, the bishops' conference said.

While the bishops' five days in Rome included visits to the different offices of the Roman Curia, the bishops also had expected to focus on the Synod Path during a joint meeting Nov. 18 with Pope Francis and the heads of several Vatican dicasteries. Such a joint meeting has not been part of other bishops' "ad limina" visits.

In the end, Pope Francis did not attend the meeting in the auditorium of the Augustinianum Patristic Institute, across the street from St. Peter's Square.

The German Synodal Path has raised questions and eyebrows at the Vatican. Even Pope Francis has voiced caution.

In the wake of the clerical abuse scandal and with the release of a major study of its causes, the German bishops' conference and the Central Committee of German Catholics launched the Synodal Path in 2019. The process began with forums to discuss issues in the four areas the study identified as containing the "systemic causes" of sexual abuse and its cover-up: the exercise of power in the church; sexual morality; priestly existence; and the role of women in the church.

The Synodal Assembly has met four times to pray, discuss proposed documents, amend them and vote on them. The fifth and final assembly is scheduled for March.

In the first four sessions, assembly delegates and bishops passed a number of resolutions, including calling for structural changes to the church in Germany, recognizing and promoting women's ministry and leadership, involving laypeople in choosing bishops and having a more welcoming and accepting attitude toward LGBT and trans Catholics.

The recommendations in some approved texts can be adopted without approval from Rome, but others must be referred to the Vatican before implementation.

In July, as the delegates were preparing for their fall meeting, the Vatican press office released an unsigned "declaration of the Holy See," saying, "It seems necessary to make it clear that the 'Synodal Path' in Germany does not have the power to compel bishops and the faithful to assume new modes of governance and new approaches to doctrine and morals."

The declaration warned that if the Catholic Church in Germany tried to "initiate new official structures or doctrines in the dioceses prior to an agreed understanding at the level of the universal church," it would be "a wound to ecclesial communion and a threat to the unity of the church."

"That communique was written by the Secretariat of State," Pope Francis told reporters. "It was a mistake not to say so," but it was an oversight and "not out of bad will."

Pope Francis said he had spent a month praying, reading and consulting with a variety of people before he wrote a letter to German Catholics in 2019 urging them to ensure their Synod Path was a process of prayer and discernment and not simply a search for an efficient way to handle challenges facing the church in Germany.

"I wrote it as a pastor to a church that is trying to find its path forward," he said. 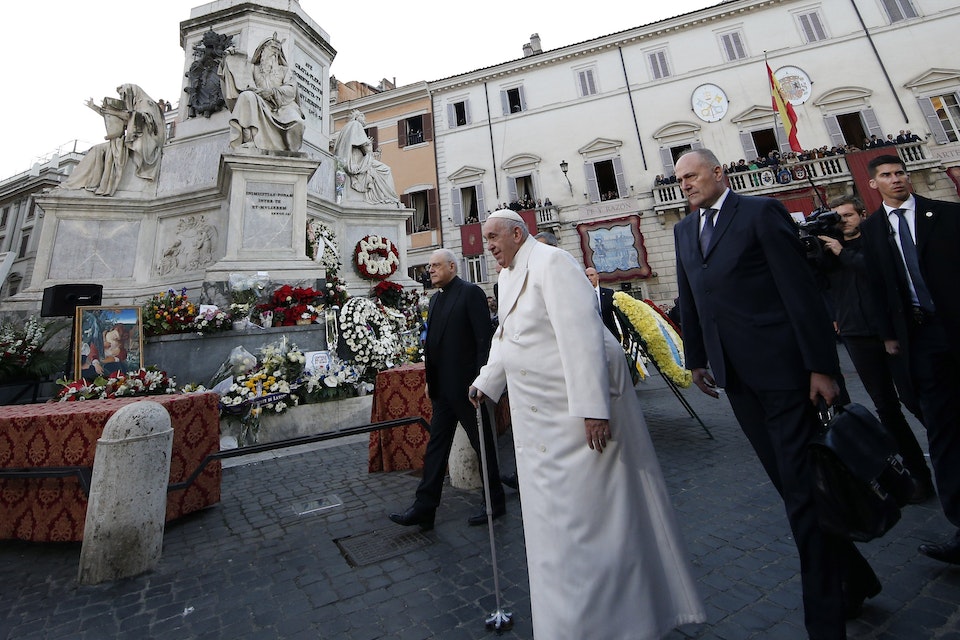