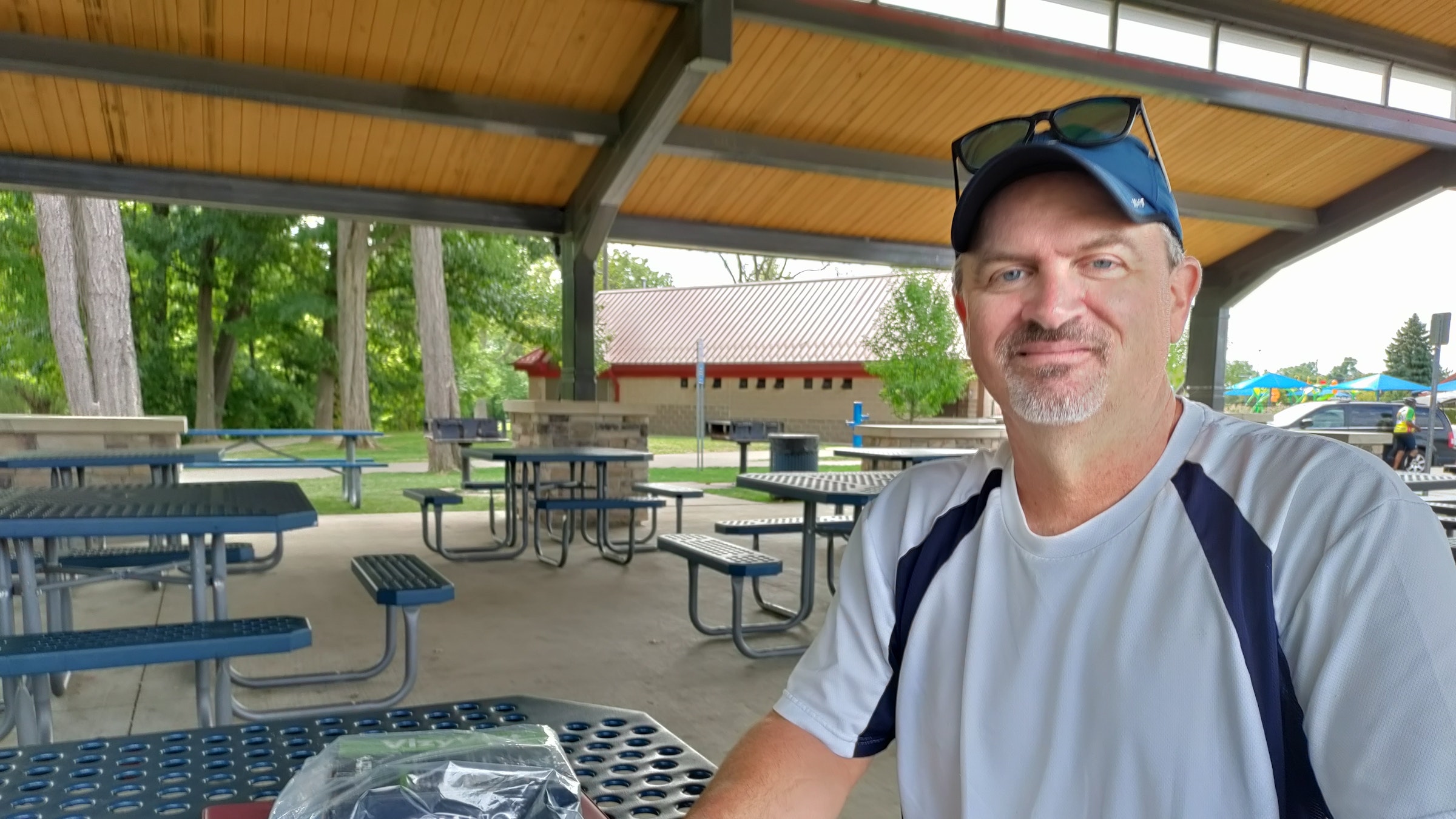 This fall Gregg Golden starts his 26th year as cross country and track coach at Regina High, the last five while under treatment for pancreatic cancer. “Thank God for the kids,” he said. “The kids have helped me through it.” (Photos by Don Horkey | Special to Detroit Catholic)

WARREN – Gregg Golden has reached a couple of milestones with the advent of the 2022-2023 school year.

He’s started his 26th season as cross country and track coach at Regina High, where he’s built the Saddlelites into a force to be reckoned with in the Catholic League, Macomb County and the state.

The other significant event is one he’d rather not acknowledge. Come November, it will be five years since he found out he had the dreaded pancreatic cancer.

After sending his quad through a recent early morning practice, Golden reflected.

“I wasn’t feeling well for a while. We did a couple tests that were inconclusive. I was getting worse. They thought my gall bladder was bad. They went in for a routine surgery to remove the gall bladder, and they found cancer on my liver. They did couple more tests and found the source was pancreatic cancer.

Golden, 53, laughed. “I’ve outlived expectations. Put it that way. It’s stable right now. We’re pretty happy with that—chemo treatments every two weeks, a scan every three months. Treatments knock me for a loop. Annie and Becky, who I coach with, are fantastic, so if there’s something I can’t handle, they take care of it.”

Ann Zdankiewicz has assisted for five years and Becky Hendren for 20 years.

“Both are terrific,” Golden said. “Honestly, I don’t do a whole lot anyway except stand around and yell. They do most of the heavy lifting.”

“He’s a source of great inspiration,” Hendren said. “The kids run hard. They run for him. He truly is one of a kind.”

Sophomore Natale Lentine said, “He’s the best coach we can ask for. He knows how to push us to be the best we can be.” 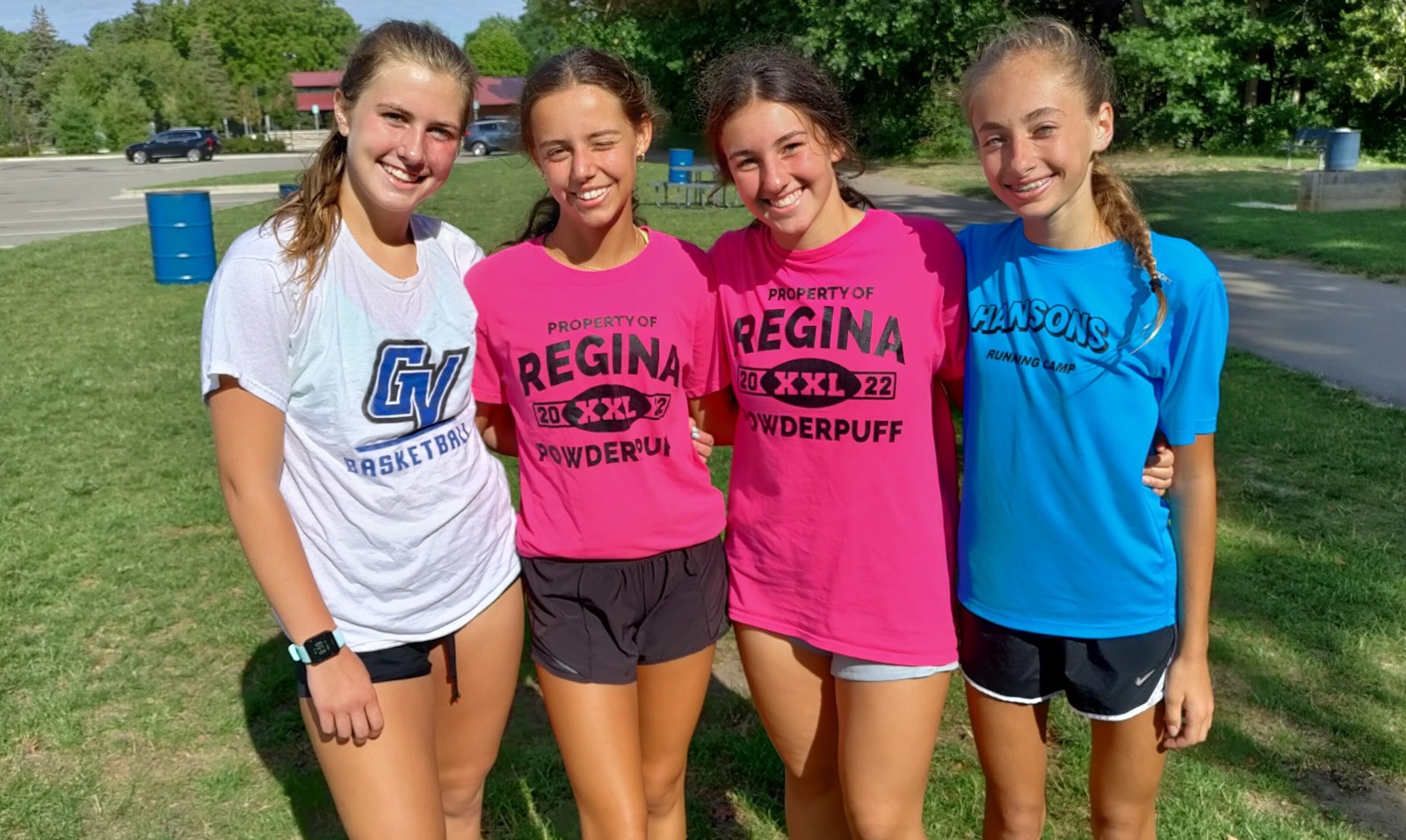 This quartet will be counted on to provide the leadership for the Regina cross country squad: Junior Kennedy Roskopp (left), junior Gabby Fernandez, sophomore Natale Lentine and sophomore Elizabeth Ambroggio. About Coach Golden, Lentine said, “He’s the best coach we can ask for. He knows how to push us to be the best we can be.”

One of the “kids” was his daughter, Erin, now 22 and a recent graduate of Grand Valley State University.

“She went to Regina,” Golden said, “and she had to put up with her dad for four years in cross country and track. It went well. I think I enjoyed it more than she did. It was really great. A lot of times kids play sports and you drop them off and pick them up when it’s over. For those four years, I was able to go to practice with her.”

Golden and his wife, Lynne, whom he met in college, have been married for 28 years. Their son, Ryan, graduated this spring from DeLaSalle High, where he was a goaltender on the soccer team. He’s enrolled at Bowling Green University with an eye on becoming an airline pilot.

Golden ran cross country and track at Dearborn Heights Annapolis High School. He earned a degree in kinesiology from the University of Michigan and a master’s in physical therapy at Oakland University.

Regina has won six regional championships in track and field and finished second in the region six more times. The Saddlelites won the Catholic League crown in 2014.

Regina’s athletes have been a recipient of the CHSL Mark Carpenter Good Sportsmanship Award in 19 of the 20 years it has been presented in cross country.