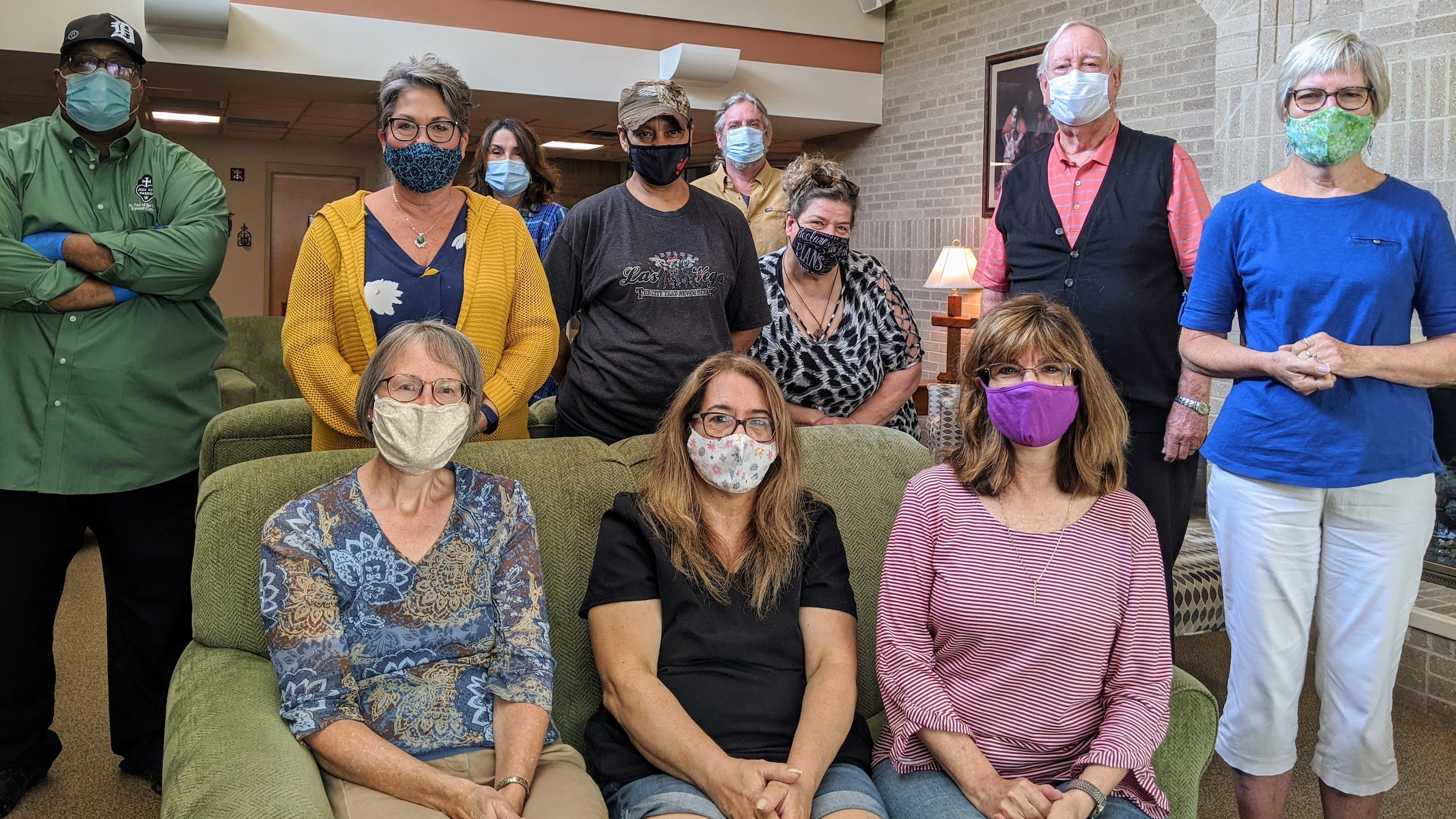 Staff members at St. Paul of the Cross Passionist Retreat and Conference Center on Detroit's west side are ready to host retreats again after a brief pause because of the COVID-19 pandemic. St. Paul of the Cross, like many other retreat centers in southeast Michigan, has been hosting retreats with limited capacity and safety protocols such as wearing masks and social distancing for meals. (Courtesy photo)

Whether for a few days or a few hours, Metro Detroit's Catholic retreat centers offer people a chance to get away and focus on prayer

DETROIT — When it feels like the entire world is turning upside down, or the work list is piled miles high, it might be best just to get away for a while.

After what seems like back-to-back years of constant news of lockdowns, upheavals, bitter arguments and devastating news, retreat centers in southeast Michigan have been serving as a place of refuge, a sanctuary where serenity can reign supreme.

Retreat centers in the Detroit area are operating at a lesser capacity than pre-COVID times, but many report they are full or near their limits as retreatants look for ways to disconnect from daily life and reconnect spiritually.

“We are limiting our capacity to 60, a number we landed on because our chapel has pews that normally accommodate two people, but we are trying to keep it to one person per pew,” Cathy Adamkiewicz, marketing supervisor of St. Paul of the Cross Passionist Retreat Center on Detroit’s west side, told Detroit Catholic.

St. Paul of the Cross, like many retreat centers, shut down in March 2020. The center reopened in September 2020 with a capacity of 35 guests for its weekend retreats.

For this year’s retreat schedule, which goes from September through May, St. Paul of the Cross increased the capacity for retreats while instituting COVID precautions and protocols such as limiting the dining hall to four people per table and encouraging masks for unvaccinated retreatants. 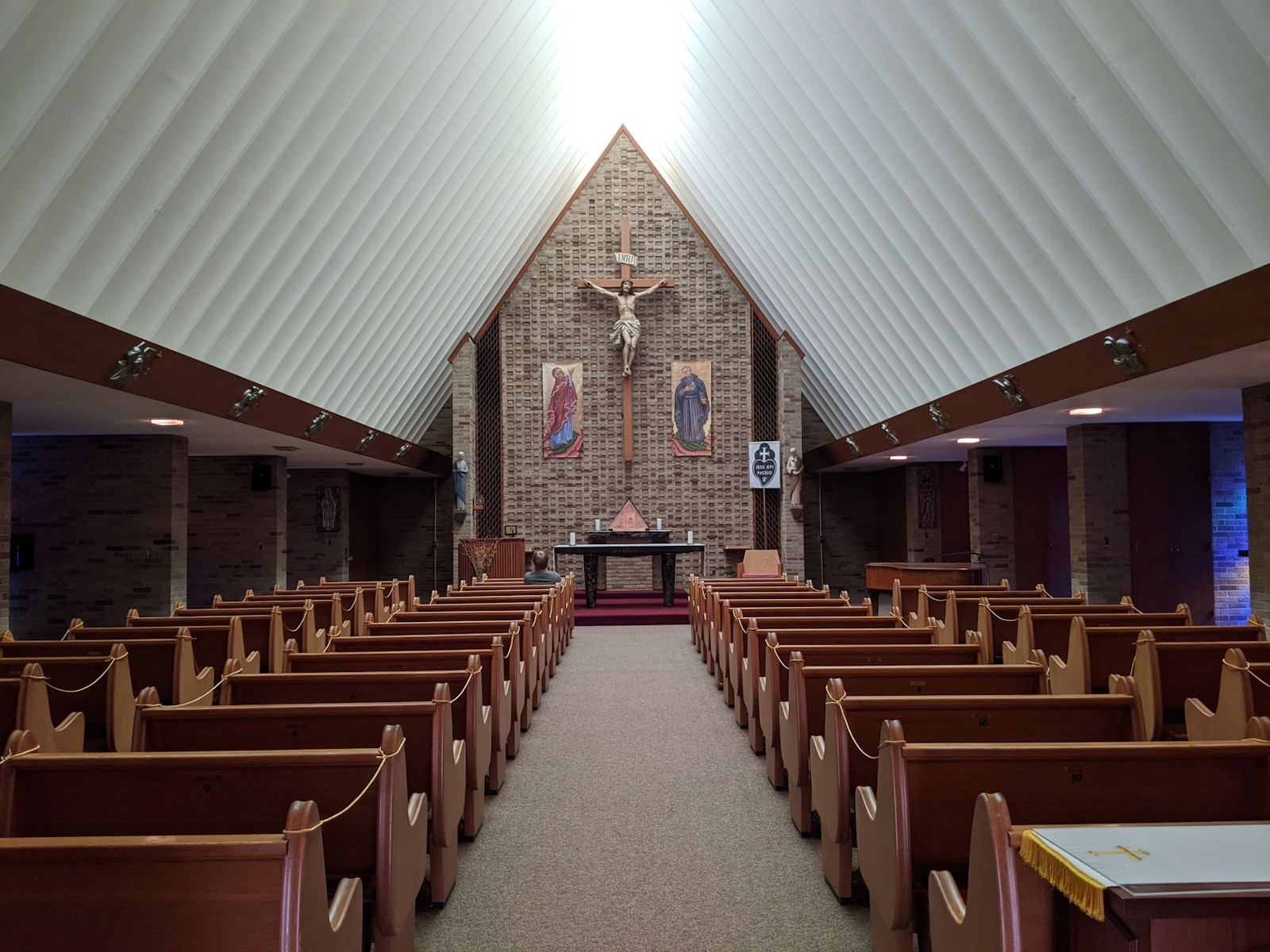 St. Paul of the Cross roped off pews to encourage more social distancing, allowing only one person per pew. (Courtesy photo)

Adamkiewicz said the retreat center has mostly been at its 60-person capacity for its weekend retreats.

“We have all of our guests when they come in for a weekend retreat take their temperatures, and when we reopened back up, everyone was masking and social distancing,” Adamkiewicz said. “We’ve been doing a lot of extra sanitizing in the building, cleaning the floor. This season, we’ve been really responsive to the case numbers in the area, prepared in case people cancel at the last minute or things need to change.”

Capacity limitations haven’t incumbered people who make it a routine to go on retreat, or those who are experiencing a retreat for the first time.

Manresa Jesuit Retreat House in Bloomfield Hills is now operating at a 40-person capacity — pre-pandemic it was 70 — with a mix of groups and individuals scheduling weekend retreats.

Sr. Linda Sevzik, SM, Manresa's director, said the center has experienced mostly returning retreatants whose groups make annual or semi-annual trips as part of their spiritual routine; but there has been an increase in new, younger retreatants.

“Even though our numbers are still down, we’ve seen a greater variety of people,” Sr. Sevzik said. “It does seem like there is a movement of people being more aware of their spiritual lives, that they need to nourish them in some ways.”

During a recent women’s retreat at Manresa, 12 of the 40 retreatants were first timers, said Sr. Sevzik, and like St. Paul of the Cross, Manresa is reaching its COVID capacity most weekends.

Sr. Sevzik’s conversations with new retreatants revealed to her how many people have been looking for opportunities to reset themselves spiritually or tap into a part of their spiritually they haven't explored. 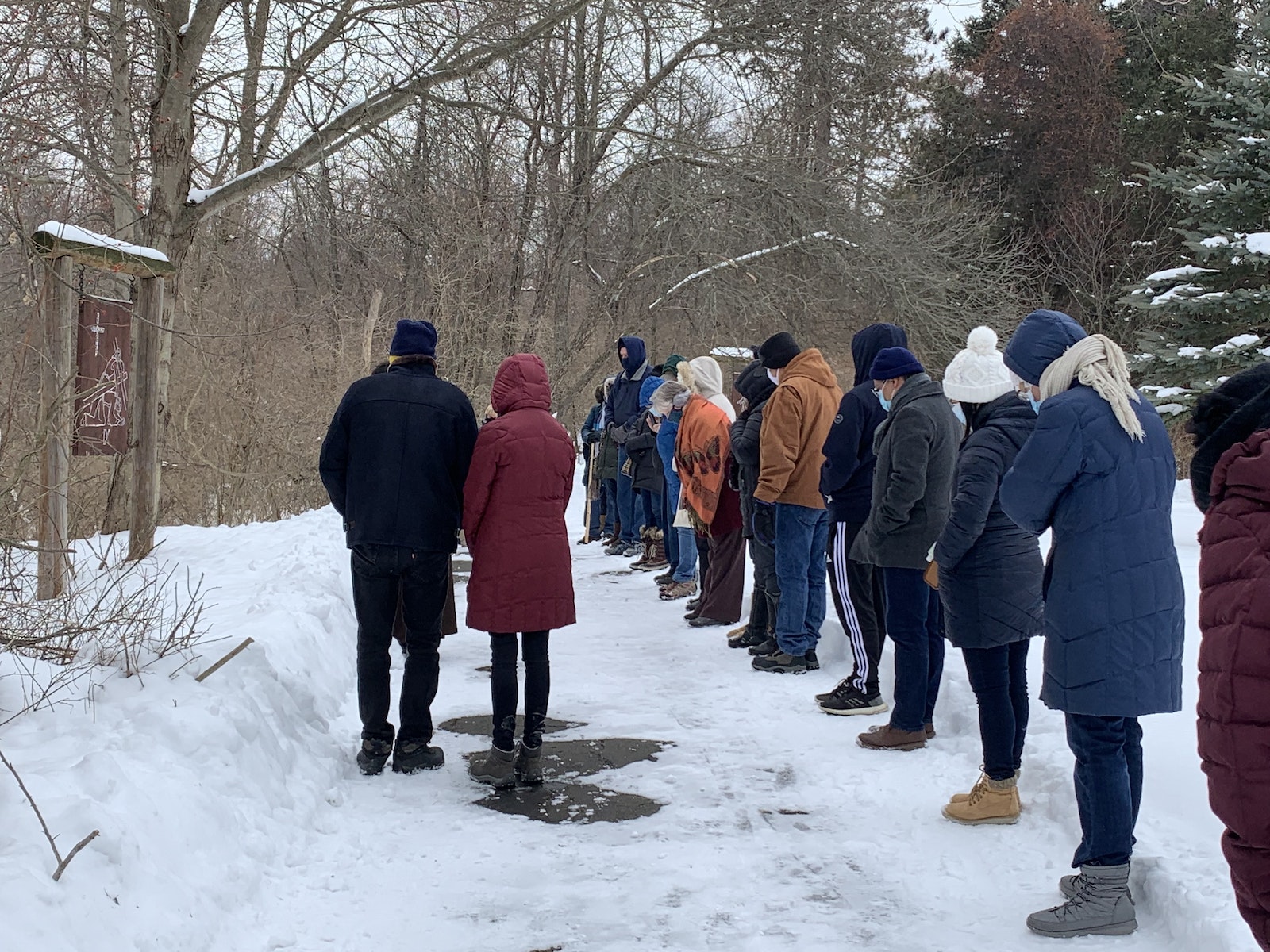 Retreatants walk the Stations of the Cross at the Capuchin Retreat Center in Washington Township. (Photo courtesy Steven Stechschulte)

“Some specifically said they need to do more in their spiritual lives,” Sr. Sevzik said. “Interestingly, we get a number of men and women who come from the Toledo area who have found us online. They make quite a sacrifice to drive up this way.”

The overall schedule of retreats has remained the same both at St. Paul of the Cross and Manresa, with a Friday afternoon check-in following by meals and prayer time together, conferences put on by spiritual advisers, time for individual prayer and reflection, confession, Eucharistic adoration and whatever special prayer and meditations individual or group retreatants may seek.

St. Paul of the Cross is booking retreats into 2023, with the calendar filled by long-standing retreat groups and those who have found an interest in retreats as a way to deal with the particular stressors brought along by COVID-19.

“We are definitely seeing an rising interest in retreats,” Adamkiewicz said. “One of the things we started to offer for the last season and even now into this year are private retreats. We’ve always offered them, but we’ve now put more an emphasis on sharing them."

Some retreatants may come for three days, while others stop in for a few hours, Adamkiewicz said. 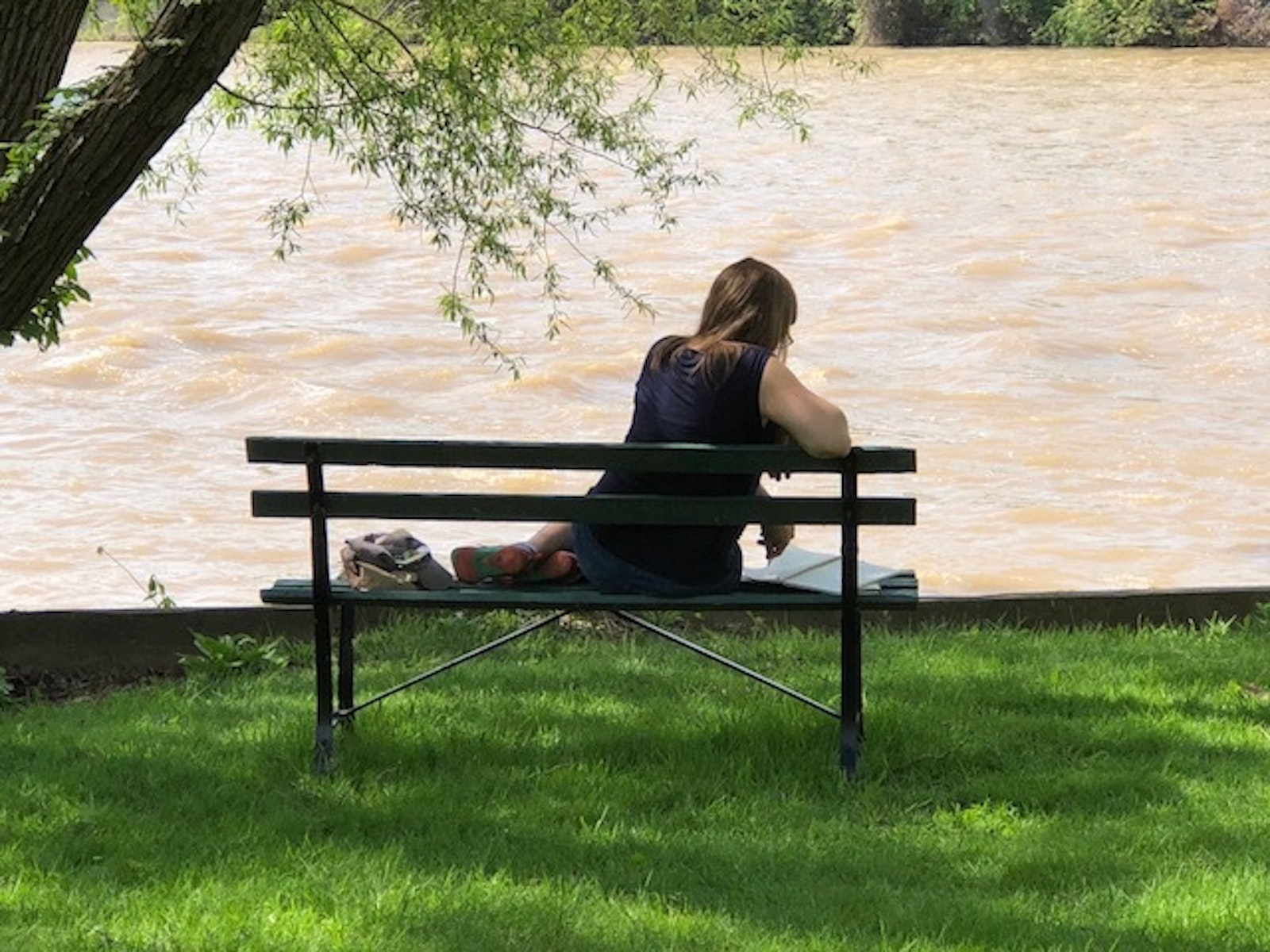 A woman sits on a bench overlooking the River Raisin at the IHM River House in Monroe during the summer months. (Courtesy photo)

“Others will want to meet with a spiritual director or pastoral staff — we’re seeing a lot more of that, especially after COVID and all that time alone,” Adamkiewicz added. “People are looking for personal growth; they are hungry for that time with God.”

After an initial shutdown because of COVID-19, the River House has offered extended individual retreats where retreatants can stay up to 30 days for a period of prayer, reflection, meditation, reading and walking the IHM Motherhouse grounds.

The River House normally can serve up to four individuals at a time, but with COVID restrictions, the spirituality center is now only open for one retreatant at time. Still, there's been a steady demand, said Cristy Smith, coordinator of the River House IHM Spirituality Center.

“Over the summer, things really started picking up,” Smith said. “We had one person here throughout the entire summer. When they would leave, we would quarantine the room off that they were using, having a housekeeper come in and clean it. Our numbers are down because we’re only doing one person at a time, but the use of the house has been consistent.”

River House’s location on the campus of the Sisters, Servants of the Immaculate Heart of Mary, offers a chance for prayerful reflection, featuring paths and a Labyrinth — an intricate, windy path one walks while praying — and gardens overlooking the River Raisin.

River House features a full kitchen, but unlike St. Paul of the Cross or Manresa, retreatants cook their own food and are on their own retreats with the guidance of a spiritual advisor if requested, as opposed to be part of a larger retreatant cohort.

“It gives people a place to go where they can get away from their house or their apartment or their job,” Smith said. “It gives them someplace that is different, where they can just focus and decompress. We have people who will come for just one day or a couple of hours, just to get away from their homes and the everyday routine, refocusing themselves and to have that quiet time with no distractions.”

It’s a testament to the importance retreats play in people's spiritual lives that centers are seeing a constant demand for retreats — and after a hectic 2020 and 2021 — more people are asking about retreat centers as an option to reset themselves mentally and spiritually.

“I think the whole idea of a retreat, both for those who have been here before and those who are new, is appealing right now, and people are really appreciating the smaller numbers,” Adamkiewicz said. “When everything seems so crazy and torn apart, and everything is so different, this is a place they can come back to, a touchstone, where things are the same.

"We have these COVID protocols in place, but they can go back and feel the continuity," Adamkiewicz said. "Catholics have been coming to us on retreat for many years, and they still are continuing that connection with their faith, that need for rejuvenation.”