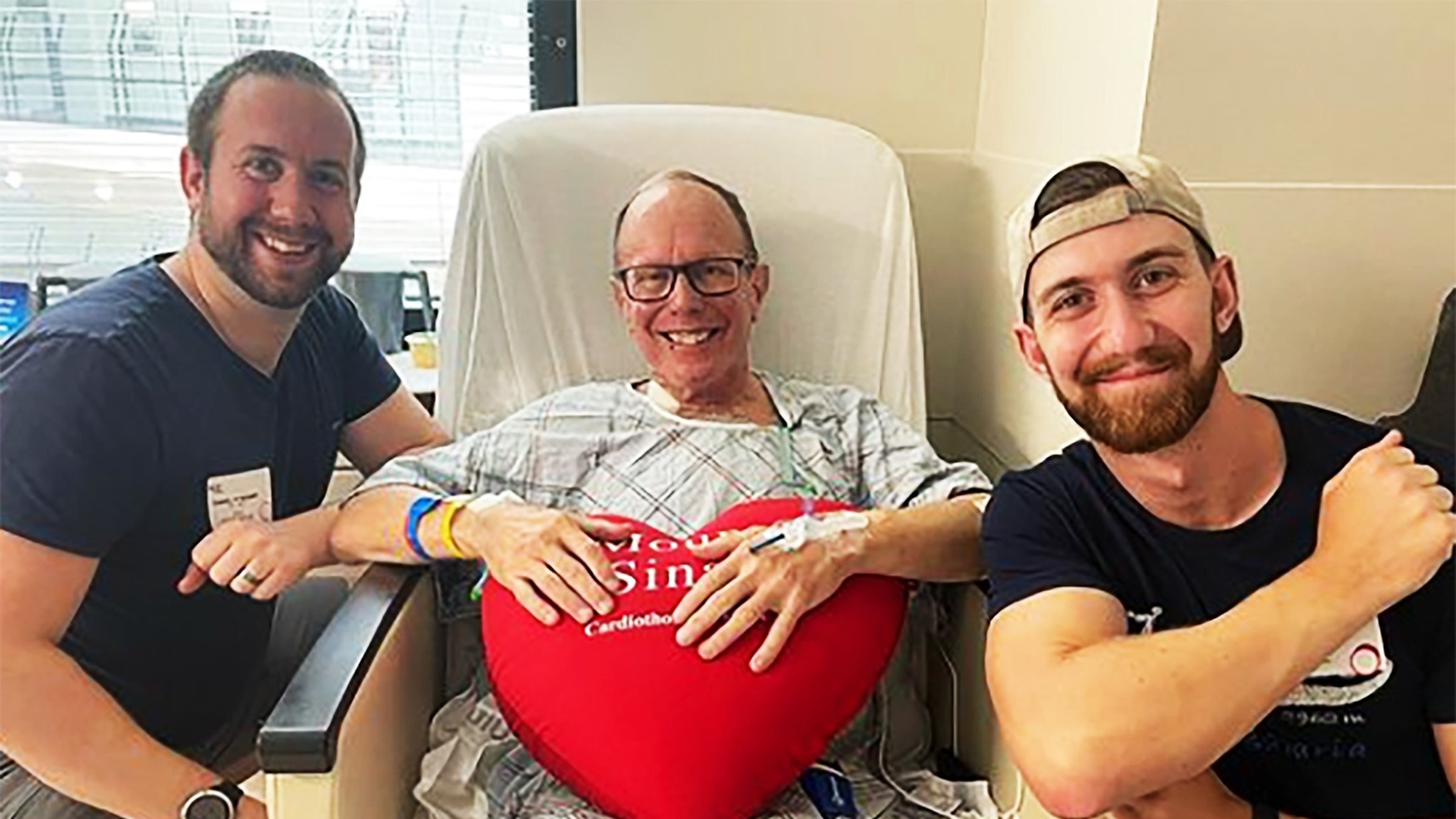 In this July 25, 2022, photo from Father Henry Zinno's Instagram account, the pastor of Our Lady of Mount Carmel in Bristol, R.I., holds up a stuffed heart in the cardiac unit of Mount Sinai Hospital in New York City. He is joined by his nephews, Kevin and Danny, who traveled to New York to be with their uncle as he recovers from heart surgery. (CNS photo/courtesy Father Henry Zinno)

In 1971, this question provided the Bee Gees with their first No. 1 single in the United States. Now, the same query is at the heart (so to speak) of an ongoing online video series by Father Henry Zinno, pastor of Our Lady of Mount Carmel Church in Bristol.

The concerns facing Father Zinno are a bit more literal than the question posed by the Brothers Gibb, however.

"Hey, everyone. It's 6 a.m. on Thursday, April 26, and I'm about to take the first step on the journey to heal my broken heart," he said in his first video, shot while he was waiting for his nephew to drive him to Miriam Hospital in Providence.

That step, as he went on to explain, is cardiac catheterization -- a preliminary scope of his blood vessels to identify any blockages or other anomalies before having his aortic valve replaced.

"It should all go well; this is kind of like the first step to getting things going toward scheduling my surgery," he said, before signing off with a simple "God bless."

Over the course of the next 11 videos, viewers were able to track Father Zinno's preparation leading up to his July 20 surgery and follow along with his recovery afterward. The videos can be viewed at https://tinyurl.com/mrz25n99.

He spoke with Rhode Island Catholic, Providence's diocesan newspaper, during the feast of Our Lady of Mount Carmel July 17.

"It's severe aortic stenosis," Father Zinno explained. "Basically, there's a valve in my heart that isn't allowing the blood to flow in and out properly. I had a heart murmur for several years that my doctor had been monitoring, and about three weeks before my first video I started having symptoms of a leaky valve: chest pain, shortness of breath and constant fatigue."

Shortly after receiving his diagnosis, Father Zinno began to research the condition online to learn more about what to expect. He found that many of the most helpful resources came from YouTube vlogs by patients describing their recovery journey.

"They gave me a good idea of what the experience would be like, which has made it easier for me to prepare and know what's ahead of me," he said.

Father Zinno's own "Journey to Heal a Broken Heart" is designed to offer future patients an additional benefit -- a bit of spiritual consolation to guide them on their own road to recovery.

After confirming that he would need open-heart surgery to address the problem, his local doctor referred him to specialists at Mount Sinai Hospital in New York City who successfully operated on him July 20.

Back in Bristol for recovery, his duties at Our Lady of Mount Carmel are being taken up by a rotating series of substitute celebrants including Father Phillip Dufour, the assistant pastor of St. Philip Church in Greenville, Rhode Island.

"I grew up with Father Zinno here at Our Lady of Mount Carmel, and he was a role model for me as I considered my own vocation," Father Dufour said.

He added that Father Zinno has a lot of people praying for him and that the priest is "practically a local institution" -- known for his expertise in the kitchen and his signature bottled marinara sauces.

Already legendary in Bristol, Father Zinno's cooking skills attracted a wider audience after the parish began broadcasting cooking lessons during the pandemic as a form of remote community building.

"It started as a little way to make people happy during the lockdown, to bring everyone together for a meal even when we couldn't do that in person," he explained.

"Then they started catching on outside of the parish, and after The Providence Journal discussed the videos in an article, we started having people tuning in from across the country and even around the world."

Prior to surgery, he spoke at the Pontifical North American College about this particular evangelization technique that also included an in-house culinary demonstration.

It was this experience coupled with the guidance he had received by watching videos from other patients, that made Father Zinno realize the potential that his recovery vlog could have for reaching a wider audience.

Its main focus, however, was to keep a close connection with his parishioners while recovering.

"I'm supposed to be out walking for a certain amount of time each day throughout recovery, so I'm sure I'll run into a few parishioners here and there," he said. "But the videos will allow me to keep everyone up-to-date about my health, to thank them for their prayers, and share a bit of encouragement with them."