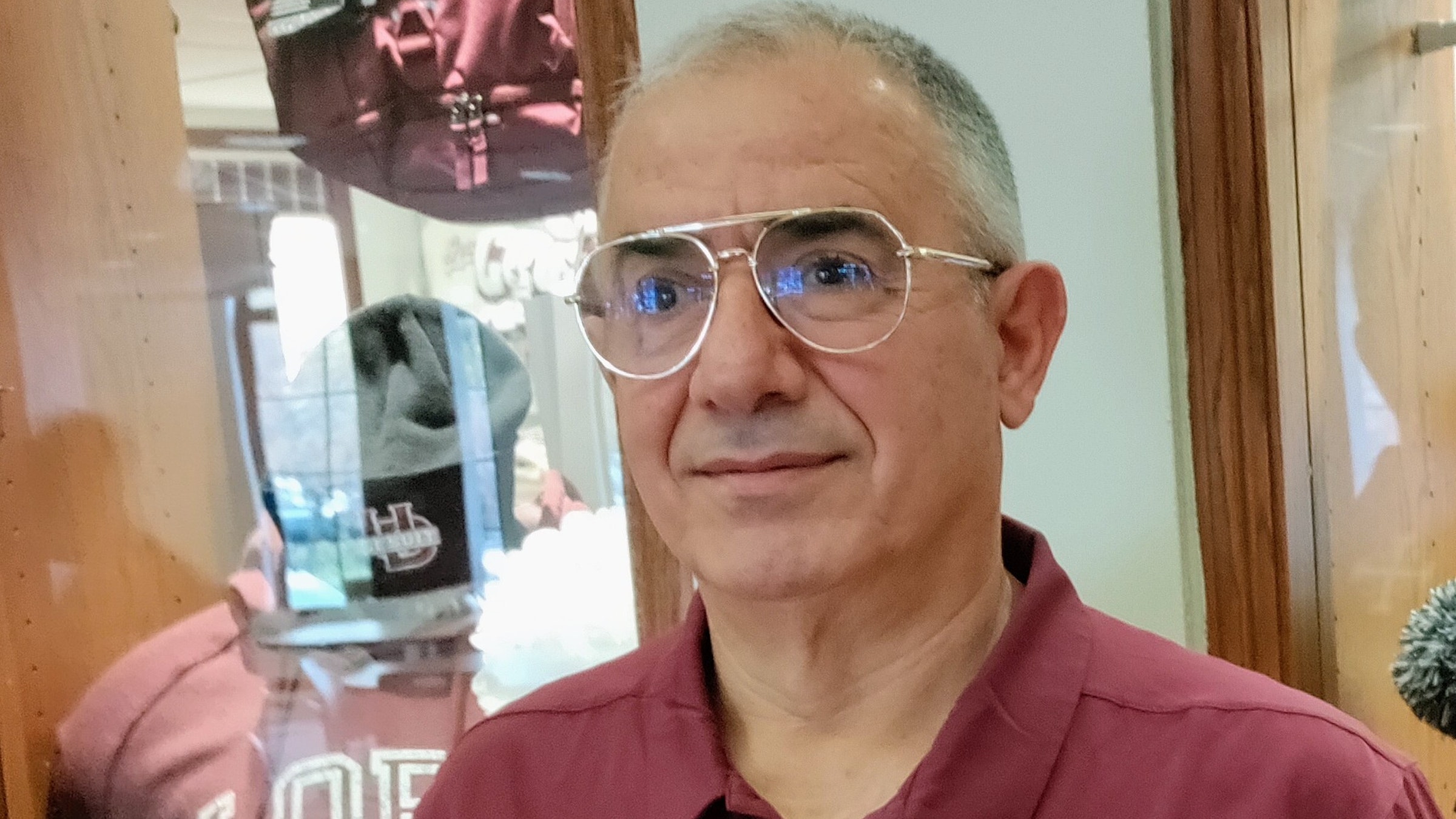 “U of D will always be my home,” says Sal Malek, newly hired associate athletic director and operations and community outreach. “I started my career here when I came from Baghdad, and I’m going to end my career here.” (Photo by Don Horkey | Special to Detroit Catholic)

DETROIT – With his hiring as associate athletic director and operations and community Outreach, Sal Malek has come home to University of Detroit Jesuit High School.

The journey started some 57 years ago, in 1964, when he was a 14-year old accompanying his father and mother upon their arrival in Sacramento, Calif., from Baghdad, Iraq.

Within a year, they headed east to settle in Highland Park, Mich. This was all by design.

While his parents didn’t have far to travel to own and operate a grocery store a half-mile from the old Tiger Stadium, their son was a couple of miles by city bus route to attend nearby U of D Jesuit.

“My mom and my uncle both ran a Catholic grade school in Baghdad and were very close to the Jesuits,” Sal explains. “Before they were asked to leave, they also opened a university on the other side of Baghdad. The schools are still there but are now run by the government.”

“A Jesuit school is the kind of place where you get academic, spiritual, and athletics all at the same time," Sal said. "It creates a full person ready to go out to the real world. The Jesuits are known to have the best schools in the world. I was blessed to go to two of them -- Jesuit Collegiate in Baghdad and here.”

“My classmates were amazing,” said Sal, who enrolled in Fall of 1964. “They took me, a child of Middle Eastern Chaldean parents, and held my hand all the way through. Helping me with grades, classes, English language, everything. I have nothing more than great memories.”

Here’s one memory he enjoys sharing.

“I didn’t play sports, but I did make the football team, not by choice, but by demand. Coach told me to come out for football. I have a picture in the yearbook wearing a helmet and everything else.

“But the biggest joke. The first time I come out for football. Think about it. I came from a country where football was soccer. So, I said. ‘Sure. No problem.’ So, I get out there and I look at the ball and I tell the coach this is the wrong ball.

“I had no idea what American football was. So, I took it to my dad and said there’s something wrong. You can’t score a goal this way. My dad tells me, ‘They don’t score goals. They score touchdowns.’ I had to understand all of this.”

Sal lasted one year on the football team.

He graduated in 1967, went for a year to Henry Ford Community College for intensive English, then to the University of Detroit for a Bachelor's (1972) and a Master’s in guidance and counseling (1974).

During his time as a student and later in his post-graduate years, a span of nearly two decades, Sal worked for a series of athletic directors at the university, starting with the late Bob Calihan, in a variety of responsibilities in the business office and auxiliary services, and later as assistant Calihan Hall business manager.

He adapted what he learned for the next 28 years in a pair of athletic director positions, 20 years (1993-2013) at Livonia Ladywood High School and eight years (2013-2021) at the Academy of the Sacred Heart in Bloomfield Hills.

“I always tell people,” he says, “think about a guy who didn’t speak English, getting assimilated, coming here legally, going through all the hoops you have to go through to become a citizen and doing these jobs. It’s a dream.”

He mentioned three mentors who were there for him.

“It’s all about the people you meet. And of course (CHSL Director) Vic Michaels, (former CHSL director and currently an MHSAA official) Tom Rashid and (CHSL associate director) Mike Evoy. The Catholic League is a service organization that does everything for the good of our youth.”

When it came time to decide about college, Sal laughs, remembering his wife telling the boys, “You can go on all the campus visits you want, but your dad is only paying if you go to U-D.”

Matt attended Augustinian-related Villanova on a soccer scholarship. He’s living in California and working “in the entertainment business.”

Joe enrolled at Jesuit-related Loyola of Chicago. He works for Rocket Mortgage in Detroit. His wife, Ann Marie, teaches at St. Joan of Arc School in St. Clair Shores. They have a 2-year-old daughter, Lucy, to whom Sal is committed to babysit two-days-a-week.

Which brings us to Sal finally getting home at U of D Jesuit.

“Fr. (Theodore) Munz (president of U-D Jesuit) and I have talked off and on the past couple of years,” Sal says, “that when I was ready to give up full-time AD to give him a ring. We met and kicked around the idea of my helping athletics and the school’s development program on a part-time basis. I’ll be working with AD Nick Kocsis raising money for athletics and for other needs for the school.”

He never really left, did he?