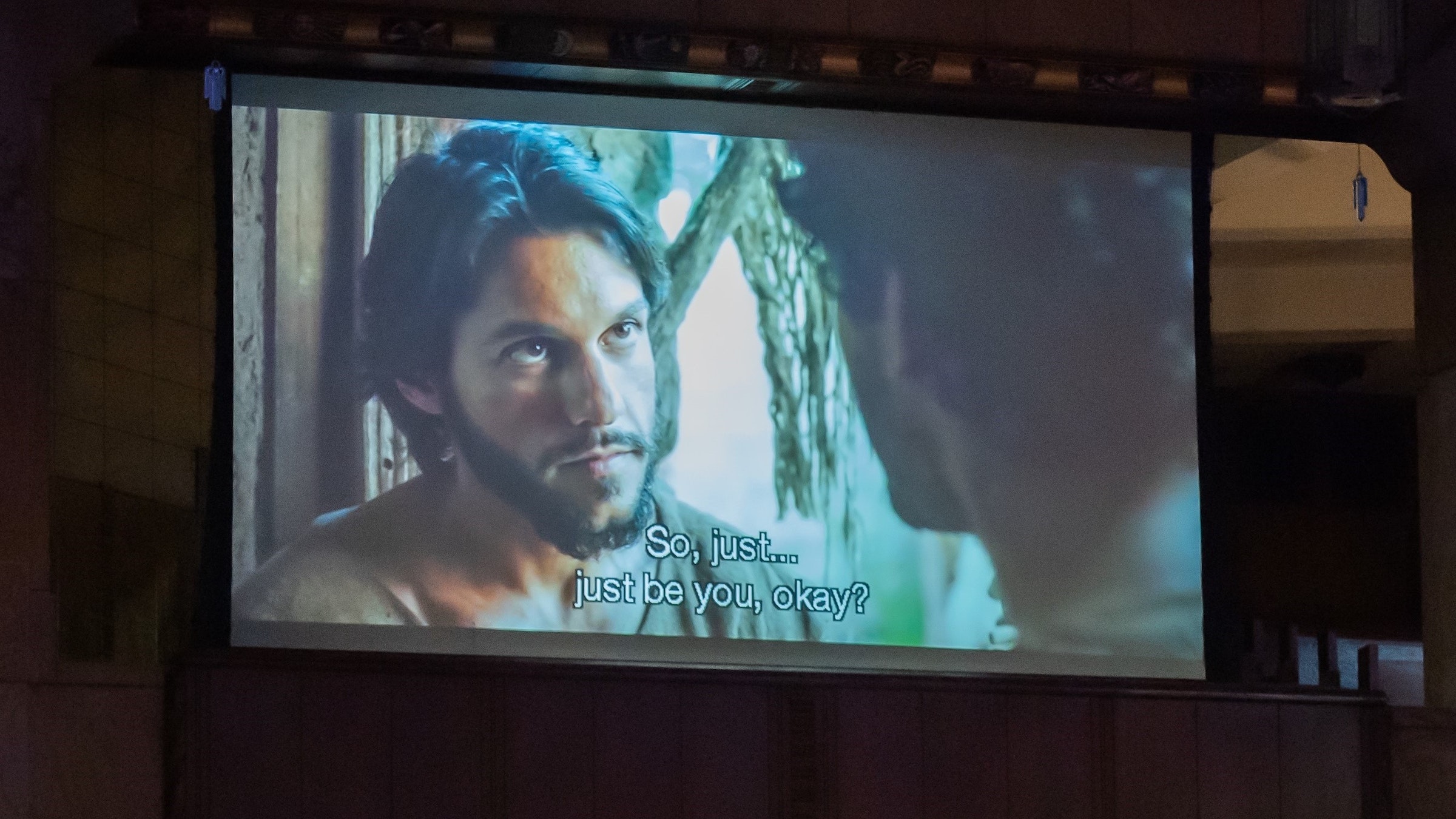 The apostle Simon Peter, played by Shahar Isaac, speaks with the apostle John, played by George Harrison Xanthis, in a scene from the acclaimed biblical series “The Chosen,” shown July 28 on a big screen inside the National Shrine of the Little Flower Basilica in Royal Oak. The basilica is hosting weekly watch parties, followed by discussion groups. (Photos by Valaurian Waller | Detroit Catholic)

ROYAL OAK — On Wednesday evenings in Royal Oak, the edifice of the National Shrine of the Little Flower Basilica becomes the town’s biggest entertainment complex.

But the screens are still preaching the Word, as an estimated 100 people visit the historic church for a weekly showing of “The Chosen,” a highly acclaimed biblical TV drama series depicting the life of Jesus Christ and his apostles.

The parish has been showing an episode a week of the high-quality independent series that’s taken the Christian media world by storm, so far attracting more than 160 million viewers worldwide. The weekly viewings at Shrine are followed by conversation and fellowship on the parish porch.

“It came out last year during COVID and got a groundswell of people watching,” said Beth Spizarny, director of evangelization and faith formation at Shrine, referring to the show, which is available on its own streaming platform. “We noticed it was invoking a lot of curiosity about the person of Jesus, a deeper awareness about the culture and time in which he came, which really illuminated his message.”

The series is a drama, with made-up back stories for the apostles, Mary Magdalene and other followers of Jesus, but hews closely to the biblical storyline and remains faithful to the Gospels.

Seeing how popular the series had become, Shrine has organized watch parties in the church every Wednesday, making use of two large screens normally reserved for hymn lyrics.

“We have people watching episodes about the life of Christ in the place where people receive Jesus in the Eucharist,” Spizarny said. “People are watching episodes in the basilica and then going out to the porch for small group discussion afterward, which is great. You hear all the buzz of traffic on Woodward (Avenue), and people are looking out and asking ‘What’s happening on the porch at Shrine?’”

Michelle Kennedy is a Shrine parishioner who had already watched “The Chosen” with her husband and now serves as a discussion leader in her group after each episode.

“It just takes it to a new level,” Kennedy said of “The Chosen.” “You have Jesus present with you in the church as you are watching the story about his life. That is really cool, watching it with other parishioners who will appreciate the story just as much as you do.”

Kennedy and her husband are new to the parish, moving to the area last year amid the COVID-19 pandemic, so going to the weekly screenings and discussions has helped them become immersed in the community.

“It has been really great for us to get to know people who are involved in the parish,” Kennedy said. “During the pandemic, it was hard to meet people, so this has been a great opportunity to introduce ourselves.”

“The Chosen” screenings also have attracted members of other faith communities, who come to the basilica to discuss the series and the Gospel story.

Martin Clement is a member of the Strictly Biblical congregation on the corner of Grand River and Oakman. Clement has two children who graduated from Shrine, so his name is on the parish email list.

“I think (the series) is taking some artistic license in portraying some things, but hopefully it encourages folks to pick up the Bible and read it,” Clement said. “If the format is encouraging people to look at the Gospel stories themselves and dig in deep to the Scripture, then they are actually getting God’s word.”

For instance, Clement reflected upon an episode depicting the wedding at Cana, during which Jesus is shown socializing and laughing with family members. While not every line in the show is biblical, it helps viewers imagine what Jesus might have been like as a real human being.

The conversations after each episode have been the kind of socializing — and evangelizing — people have been craving, Spizarny said.

“People are hungry for these connections,” Spizarny said. “In a parish of our size, it’s always been a challenge for people to become engaged in the community life of the church.

“Last week, I saw a man greet a woman, saying, ‘How are you? And by the way, I got the job.’ And the woman replied, ‘Oh, I was just praying for you,’” Spizarny recalled. “These people who are talking like old friends just met two days ago in a discussion group here. But this is what church is: we are supposed to know about each other, care about each other and make their hardships our own hardships, spending time together and growing together.”