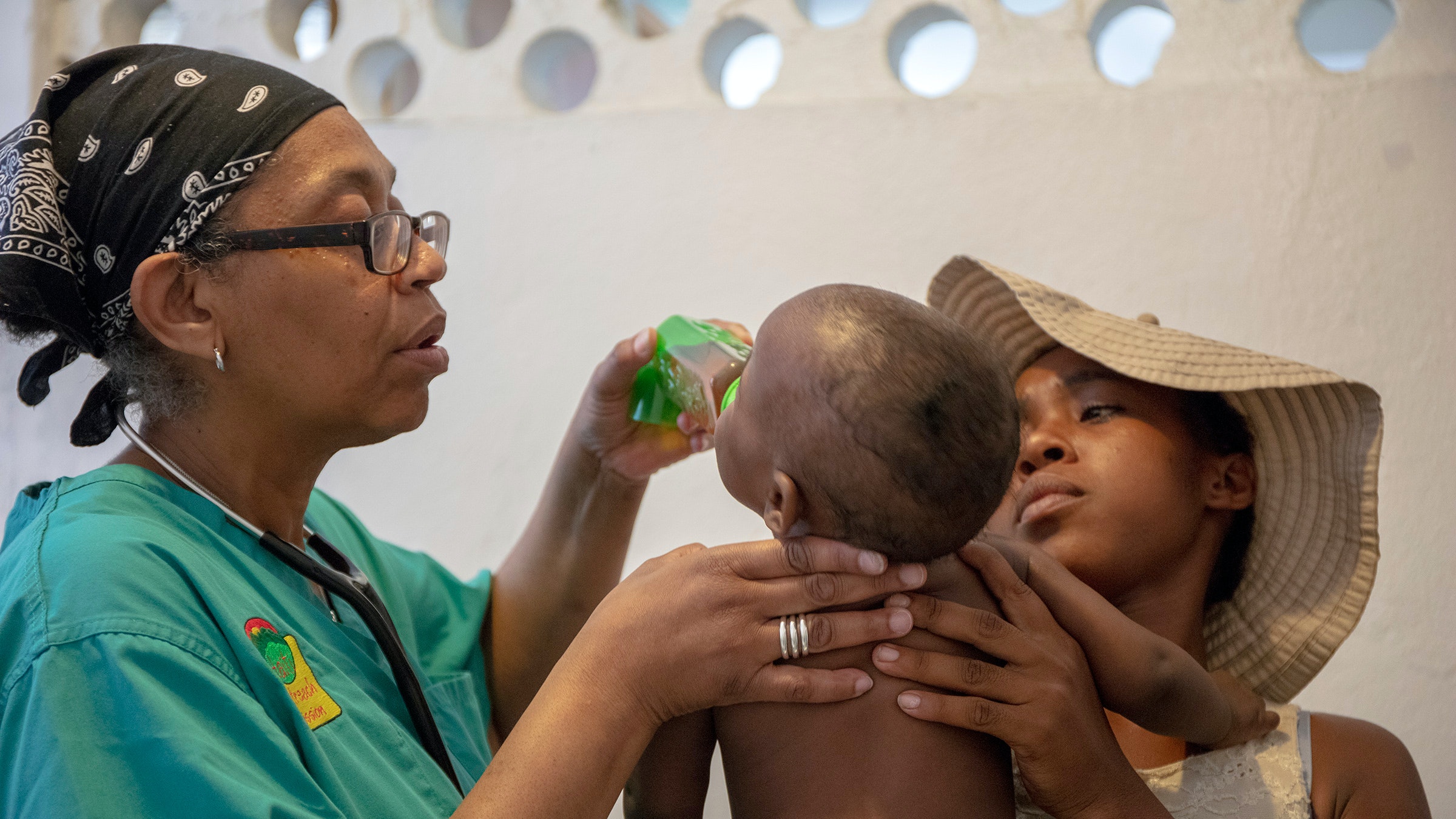 Dr. Dominque Monde-Matthews, president of the Haiti Outreach Mission, provides care to an infant at the mission’s medical and dental clinic in Mirebalais, Haiti. Following the political upheaval stemming from the assassination of the Haitian president and a 7.2-magnitude earthquake that struck the country’s southwest peninsula on Aug. 14, the mission is still providing care with the help of Michigan-based parishes. (Courtesy of Valerie McNeese)

SOUTHFIELD — It’s been a rough year for Haiti — a country that’s had its share of rough years.

Following the shocking assassination of its president, Jovenel Moise, on July 7, the small, impoverished Caribbean nation experienced a 7.2-magnitude earthquake centered on the country’s southwest peninsula on Aug. 14.

Amidst the country’s hardships, the Haiti Outreach Mission, a Southfield-based charitable organization that operates out of Mirebalais, a town that’s an hour-and-a-half drive northwest of the Haitian capital Port-au-Prince, is continuing to collect donations from parishes and individuals.

Though the earthquake did not have the same impact at the 2010 quake that struck Port-au-Prince, Haiti’s capital and main population center, the aftereffects will be felt throughout the country, including in Mirebalais, said Dr. Dominique Monde-Matthews, a member of Corpus Christi Parish in Detroit and Southfield-based pediatrician who helped found the mission more than two decades ago.

“The major impact is going to be people migrating from the area that was affected toward Port-au-Prince and toward Mirebalais, where we work,” Dr. Monde-Matthews, president of Haiti Outreach Mission. “The hospital Partners in Health (a Boston-based nonprofit) has in Mirebalais may be overflowed with patients as well.”

Partners in Health, a nonprofit health care organization founded by Dr. Paul Farmer, has done extensive work in Haiti since 1987. The organization’s hospital is the primary care facility in Mirebalais and the Centre Department of Haiti, with the Haiti Outreach Mission operating a 15-person staffed clinic in town.

While the earthquake didn’t directly hit Mirebalais, it’s possible refugees from the area will go to Mirebalais, overwhelming the hospital, which in turn will send more people to the Haiti Outreach Mission clinic.

“We are still supporting our mission by sending money so the clinic can operate,” Dr. Monde-Matthews said. “So there has been no stoppage in operations.”

The issue, Dr. Monde-Matthews said, has been getting that money where it needs to go — particularly to the two priests who work with the clinic, who haven’t had an easy time getting to the bank.

“There were some issues with gangs,” Dr. Monde-Matthews said. “With so much happening, it is hard for people to go about their routine, because they don’t know what’s going to happen.”

The assassination of President Moise has added to the instability in Haiti, with rogue gangs patrolling highways and making travel between towns in Haiti a challenge.

“I’ve been in contact with Fr. Rommel, a Catholic priest on the ground there. About once a month we communicate,” said Bill McNeece, vice president of Haiti Outreach Mission. “They are still trying to figure out how many people were killed or injured in the earthquake, but I’m happy to report it’s not at the level of the 2010 earthquake, because the area that was hit was not as heavily populated.”

McNeece serves on the executive committee of Haiti Outreach Mission, which coordinates with six churches — Corpus Christi in Detroit, St. Blase in Sterling Heights, Our Lady of Victory in Northville, St. David Episcopal in Southfield, St. Clare Episcopal in Ann Arbor and St. Bernard in Billings, Mont. — to raise money to support the mission.

Normally, the nonprofit organizes one mission trip a year, sending volunteers to assist with the clinic. But travel restrictions and COVID-19 have barred the organization from sending a delegation to Haiti since 2018.

In lieu of a physical trip, the organization has been gathering donations to assist the mission, which is dealing with an increased caseload and rising prices; recent instability and disasters have decreased resources and increased prices.

“We sent the Catholic priest $2,000 so he could buy food, but the problem is, Port-au-Prince has gotten too dangerous with what’s going on politically, so he has had to travel to the Dominican Republic to buy food,” McNeese said. “It’s better to give money for them to buy food locally, as opposed to sending them food, which tends to suppress the rice market in Haiti. Since Port-au-Prince is getting dangerous, he has to drive an hour to the Dominican Republic to get rice and beans.”

The dual crises of political upheaval in the wake of the assassination and the migration of people from the site of the earthquake has led to an increased scarcity and higher costs of goods needed to run the Haiti Outreach Mission clinic.

The mission works with Broken Arrow, Okla.-based Blessings International to make bulk purchases of the medical equipment for the clinic, and the cash deposits to Haiti Outreach Mission’s bank accounts help procure more local supplies. But roadblocks, roaming gangs and breakdowns in social structures have made everything more expensive in a country that was already economically depressed.

“The needs will always be financial, because recently there has been such an increase,” Dr. Monde-Matthews said. “Everything has become so expensive in Haiti now. The clinic staff, especially the dentists and physicians, haven’t gotten a raise in some 10 years, so recently we decided to give them a raise to help them keep up with everything that’s gone so high.”

On the ground in Mirebalais, the situation is less tense than in the capital or the countryside, but in early August, the town experienced an attack on its police station as gang members tried to spring members from jail.

The Catholic church in Mirebalais is a half block from the police station, and Mass was suspended for three weeks.

“They just began having Mass again on (Aug. 15),” McNeese said. “Clearly there are major concerns about the political stability and the infrastructure; there has been for three years.”

The political upheaval has also weakened the infrastructure in the country, which has experienced sporadic power outages, spurring the need for the Haiti Outreach Mission to acquire more generators.

“We just received some pictures from priests who are having trouble with their generator now, because they are seven or eight years old and have been in use so much,” Dr. Monde-Matthews said. “That would be something to add the list of things we need.”

But above all the items Haiti Mission Outreach needs — from generators and antibiotics, to bandages and dental supplies — there’s one supply that can’t be held up by customs or stolen by street gangs: prayer.

“The one thing I would like to add for people is, please send us your prayers,” Dr. Monde-Matthews said. “Haiti always needs prayers. I can’t begin to tell people about that. They have been hit so many times, by so many things. If anything, please keep Haiti in your prayers. I just feel so powerless sometimes, but I know if we have their prayers, we can do something.”

To support the work of the Haiti Outreach Mission, visit haitioutreachmission.org.