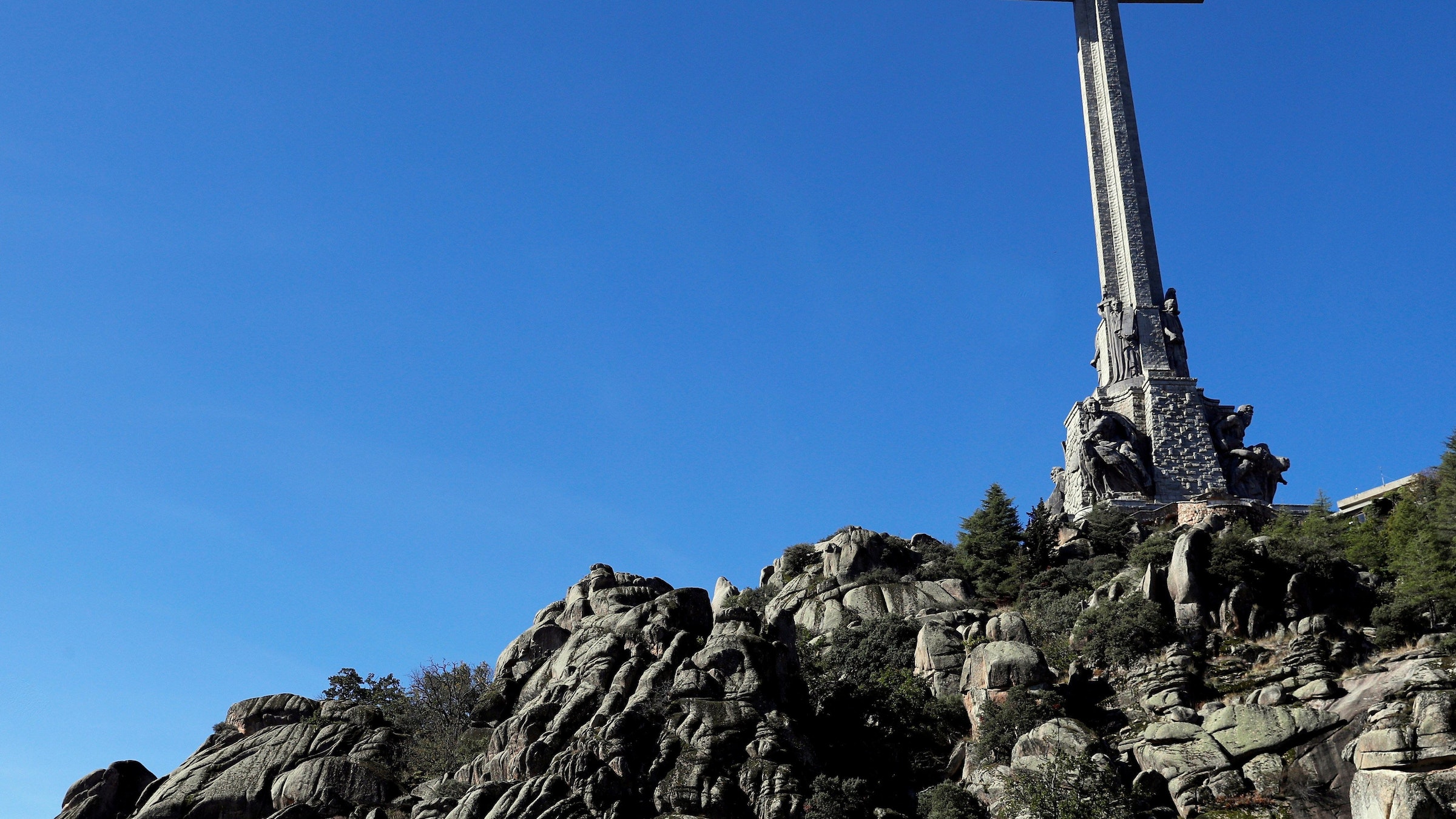 A large cross is pictured above a civil war cemetery and memorial in the Valley of the Fallen near Madrid Oct. 24, 2019. A group of Spanish Catholics sent a petition to the Madrid archbishop and Pope Francis' ambassador, asking for help to prevent the removal of the cross and a Benedictine monastery. (CNS photo/Emilio Naranjo, pool via Reuters)

MADRID (CNS) ─ A group of Spanish Catholics sent a petition to the Madrid cardinal and Pope Francis' ambassador, asking help to prevent the removal of a giant cross and a Benedictine monastery from a civil war cemetery and memorial outside Madrid.

"These Benedictines carry out an invaluable task: They pray for the people buried there, for peace and reconciliation between Spaniards," said the petition, addressed to Cardinal Carlos Osoro Sierra of Madrid and Archbishop Bernardito Auza, the Vatican nuncio.

The petition, by the Enraizados en Cristo y la Sociedad (Rooted in Christ and Society) association, was circulated as Prime Minister Pedro Sánchez's coalition government prepared to enforce a new law requiring the Valley of the Fallen, known in Spanish as Valle de los Caídos, to be redesignated a "place of democratic memory" and stripped of political elements it said exalted the dictatorship of Gen. Francisco Franco, who died in 1975.

"The permanence of the Benedictine community is not negotiable or interchangeable," said the Madrid-based association, founded in 2012 to provide "a Catholic voice in public life."

"We ask the Holy See's nuncio and archbishop of Madrid to defend the monks and safeguard the cross -- if we don't act quickly, everything will go down the drain."

The remains of Franco, who ruled Spain for four decades after the 1936-1939 civil war, were reburied at Madrid's El Pardo cemetery in October 2019 after being exhumed from a pontifical basilica at the valley, which also contains the graves of 34,000 conflict victims and is dominated by the 460-foot stone cross.

The Democratic Memory Law will require Spanish schoolchildren to be taught about Franco's dictatorship. It will pardon tens of thousands of people convicted of rebelling against Franco and will facilitate identification of murder victims from mass graves.

Under the law, the Valley of the Fallen will be renamed and made a national cemetery, giving equal status to those killed on both sides. It will be managed by a secular organization instead of a Catholic foundation.

Benedictine Father Santiago Cantera Montenegro has vowed to resist moves to expel his community, which has run the Valley since 1958.

In a July 2021 statement, Cardinal Osoro said the Benedictines had "always stood for reconciliation and for all victims," while Cardinal Antonio Cañizares Llovera of Valencia said the new law could "reopen wounds already healed" in traditionally Catholic Spain.