St. Dominic Outreach Center is ‘Christ’s presence in the city’ for those in need 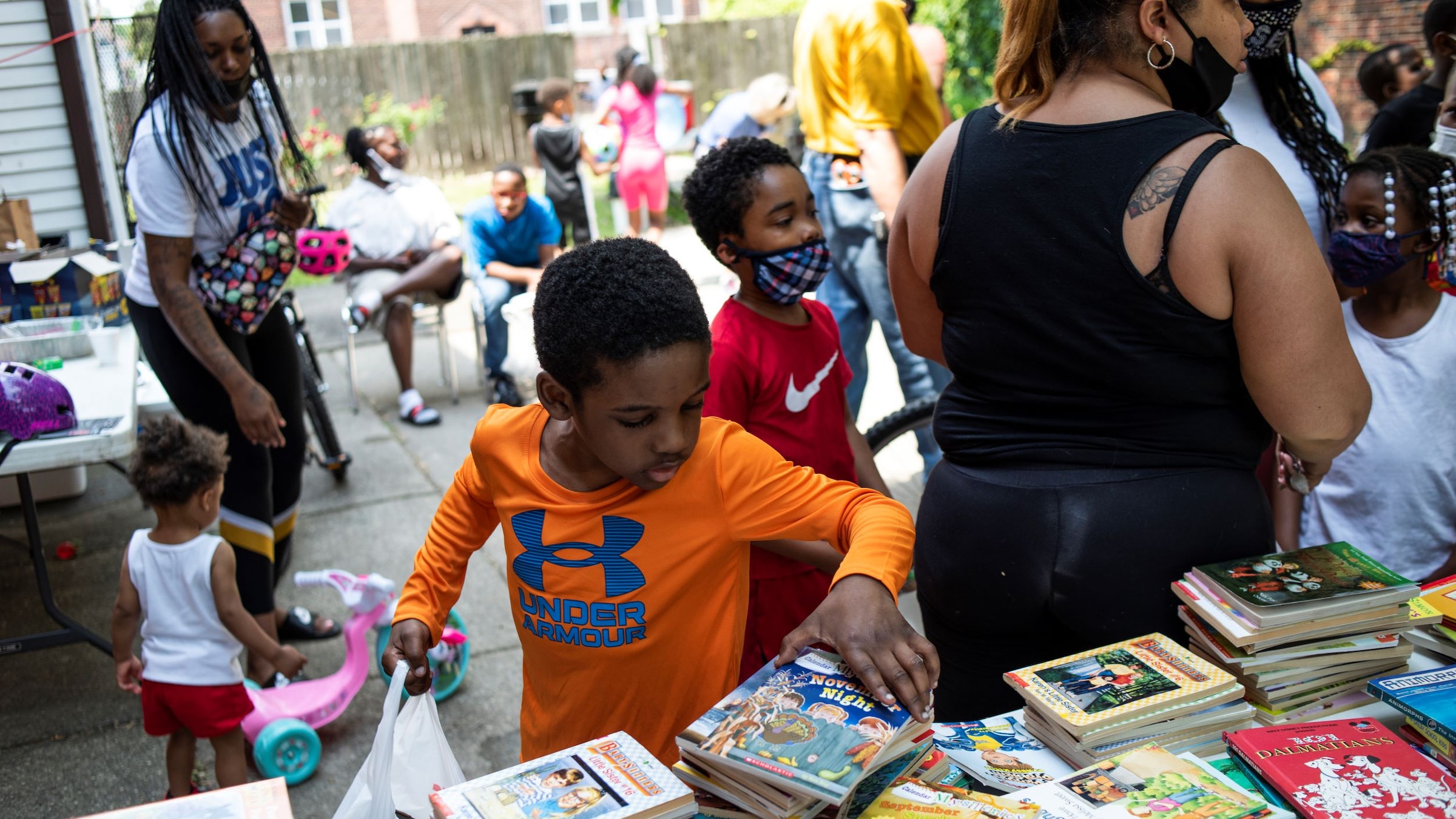 A young boy looks through a stack of books during a Toy Fest neighborhood giveaway June 12 at the St. Dominic Outreach Center in Midtown Detroit. The outreach center has continued to provide for the needs of city residents long after its namesake parish closed in 2005. (Photos by Rosamaria Zamarron | Special to Detroit Catholic)

Midtown food pantry, clothing closet still thriving 16 years after namesake parish closed, thanks to an army of donors and volunteers

DETROIT — Off a discrete alley in Midtown Detroit, the St. Dominic Outreach Center is a lifeline for the surrounding community.

The food pantry and clothing closet serves six ZIP codes on the city’s near west side, where director Sherron Jenkins greets every guest by name and shows them the love of Christ with a bag full of groceries or a sweater to wear during colder months.

Armed with donations from benefactors and surrounding parishes, St. Dominic operates out of an old convent connected to the now-shuttered parish, but the Catholic presence on the corner of Warren and Trumbull remains.

“Donations come from people who have good hearts; we have a lot of parishes that are in the suburbs who give so much,” Jenkins said. “I contact them, asking them for help, and if it wasn’t for them and the donations, we would not be operational.”

Jenkins runs the center’s day-to-day operations, organizing a small staff of workers and volunteers to organize the clothing closet on the second floor and the food supply it receives from Gleaners Community Food Bank.

Jenkins became the director of the St. Dominic Outreach Center when she was asked by then-St. Dominic pastor Fr. Denis Theroux (now at Our Lady of Victory in Northville) in 1996 to run the center “for a few years.”

Twenty-five years later, Jenkins is still running the center, even after St. Dominic Parish closed in 2005. Cardinal Adam J. Maida, then the archbishop of Detroit, asked Jenkins whether the outreach center could stay in the former convent.

“The building was falling apart, so Fr. Theroux told me I would have to move the outreach center to somewhere else, but I didn’t want to,” Jenkins said. “I’ve helped three generations of families here in this complex. I can show parents when they were little, and now they have kids they bring to the program.”

Clients come once every other month — seniors can come every month — for food assistance. Clients provide a proof of address in the form of a bill or ID and an income or bank statement showing their need for assistance.

In addition to food, Jenkins and her team organizes small hygiene kits with toilet paper, paper towels and shampoo.

Fr. Mario Amore, family-pastor of Renaissance Family 1 who ministers at St. Aloysius Parish in Detroit, is the administrator of the St. Dominic Outreach Center, overseeing the budget and overall mission.

“At the time the parish closed, the people of the parish said it was important to them and those who were running the center to maintain a presence there,” Fr. Amore said.

“The Catholic Church is needed in the city of Detroit,” Fr. Amore continued. “We know the Catholic Church is one of the largest charitable organizations in the world that keeps our brothers and sisters not only in Detroit, but throughout the world, clothed and fed. And it was important to the people for that hope to remain in the Midtown area, and important to our benefactors as well.”

St. Dominic is supported by a series of “partner parishes” who organize regular collections of food, clothing and monetary support, along with parish service projects at the St. Dominic location.

Partner parishes include Our Lady of Victory in Northville, Holy Name in Birmingham, St. Anastasia in Troy, St. Kenneth in Plymouth and St. Aloysius in Detroit.

Jenkins estimates at least 500 clients benefit from the food bank in a given year. She has built a regular rapport with families, placing an emphasis on learning their names, their situation and letting them know they are welcomed.

“I call them by their name, their last name or first name, so they feel comfortable and not like, ‘I don’t want nobody to know I’m here,’ or ‘She’s treating me like the people that don’t have anything,’” Jenkins said. “I want the people who come in here to feel as we are: that they have dignity, that everyone gets in a bad situation sometimes.”

That same devotion to service and care rubs off on the staff and volunteers. Kyle Bradley knew of the St. Dominic Outreach Center when she was a student at the former St. Leo School in Detroit.

Once she became old enough, she started volunteering once or twice a week.

“I did not think I would be volunteering for 10 years, but it became a place in my heart,” Bradley said. “Not only has the outreach helped so many people in the community, but it’s also helped my family. When my mom and dad passed, they helped me with everything I needed, whether it was food or clothes. I had my nieces and nephews in my custody, so the center helped me tremendously in getting us back on our feet.”

Bradley’s firsthand experience allows her to empathize with the men and women who receive assistance at St. Dominic.

“It was a great feeling just to know someone had my back, no matter what the circumstances were,” Bradley said.

“To come here and get school supplies (for my nieces and nephews), enough to start them off and make them feel good about themselves, as well as the coat drive, it does something to a child’s self-esteem,” Bradley said. “When you get a brand-new coat or brand-new shoes, it makes you feel good.”

The center’s annual dinner dance fundraiser was canceled because of COVID-19, but St. Dominic did host its Toy Fest giveaway on June 12. Donors gave various items, including 15 bicycles that were raffled off at the event.

“It’s important for us to be here, it’s important that as Catholics, we are here for people to see the love of Christ,” Jenkins said. “People are going to remember somebody gave them something with love, and that is the most important thing in the world. I have had mothers who cried because they didn’t know how they were going to feed their kids or take care of them for Christmas.”

While the pandemic decreased donations to St. Dominic — while simultaneously increasing the need — Jenkins said the center isn’t going anywhere. She remains grateful to the parishes who support St. Dominic with donations and food drives, as well as Knights of Columbus councils, one of which built a handicap ramp to the center, and an anonymous donor who gives 300 coats every winter.

St. Dominic is a conduit of giving for those who want to help the less fortunate. And as long as the center has something to give, it will give, Jenkins said.

“I joke with my volunteers and those who come to help me, ‘If you have a coat, make sure you put that coat up, because I might just give that coat away,’” Jenkins said. “As long as we can help, we’re going to help. It’s about making sure each of us is doing what God calls us to do. And that’s to share love.”

To learn more about the St. Dominic Outreach Center or to support its mission, either with a monetary gift, donation of supplies or to volunteer, visit www.stdominicoutreach.org.