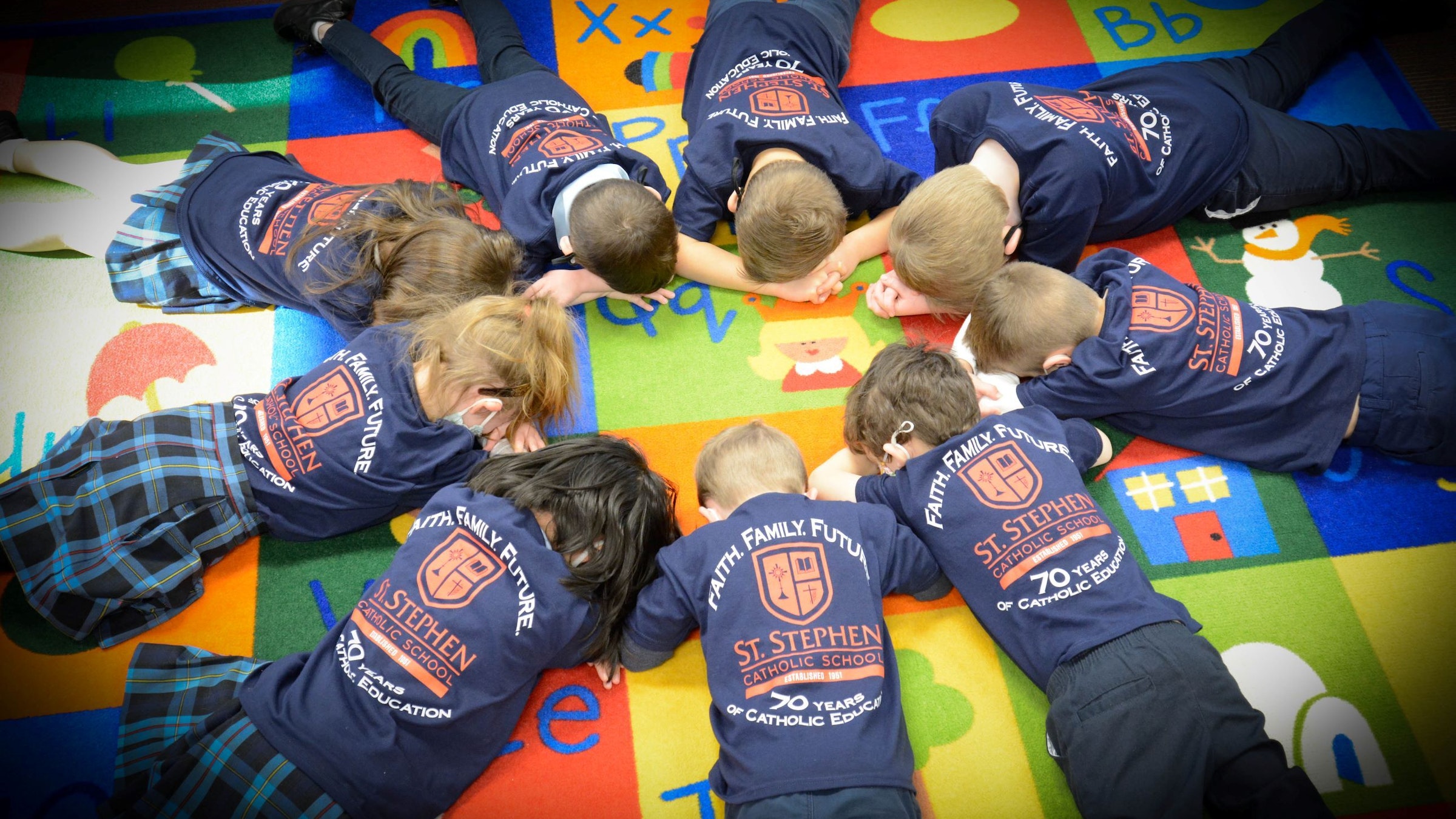 Students at St. Stephen School in New Boston put their heads down during a classroom game. The school has been teaching students since 1951, when it was launched with 180 students taught by the Felician Sisters. Today, while no longer staffed by Felicians, the school remains proud of its 70-year history and tradition of faith. (Photos courtesy of St. Stephen School)

NEW BOSTON — Deborah Sylvester, who has taught at St. Stephen School in New Boston for 35 years, has seen a lot of changes over the years.

Even though class sizes were larger when Sylvester started teaching, she said St. Stephen has become an institution for many families, noting she has taught the children of her former students.

“I went from having purple Ditto fluid and chalk on my hands to using a copy machine and having dry erase markers all over my hands,” Sylvester said, referencing the spirit duplicators and mimeographs commonly used in printing in the 20th century. In those earlier days, many students walked to the local public school to attend gym class, she added.

“We didn’t have all the specials we have now,” Sylvester said. “We just didn’t have those luxuries."

St. Stephen was run by the Felician Sisters until 2011, when it became an archdiocesan school, but it's always been proud of its steadfastly Catholic identity, she said.

“We have a strong commitment to faith, and I think that’s why we are a little more rooted,” Sylvester said. 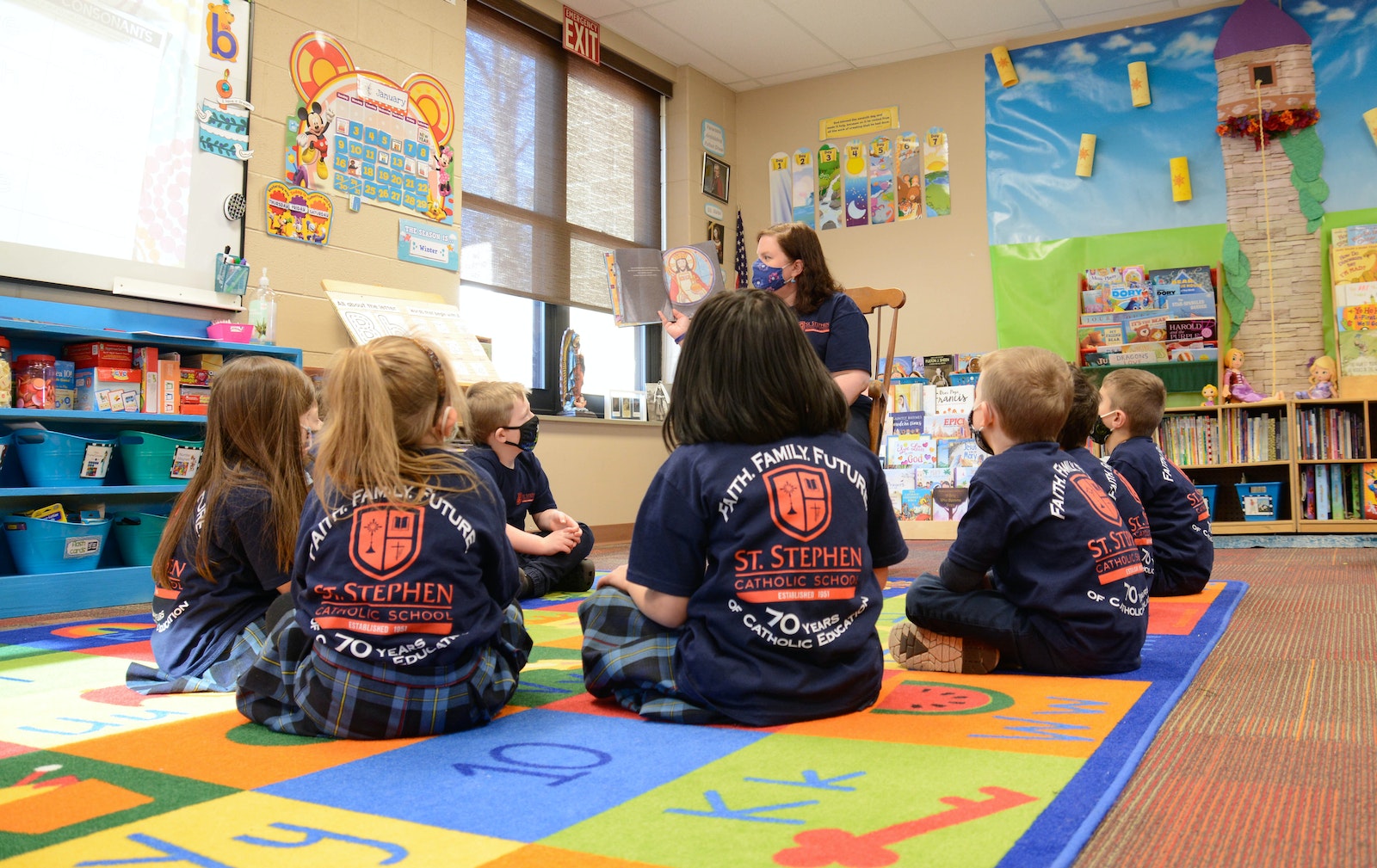 St. Stephen students listen to a story read by their teacher while wearing T-shirts showing the school's logo and motto. Many school families are multi-generational, school leaders say.

Sylvester has been teaching at St. Stephen for exactly half of the school's existence, and the changes she's seen aren't the only ones. As St. Stephen celebrates its 70th anniversary, more changes are on the horizon.

Founded in 1951, St. Stephen School opened with 180 students in a building constructed by Andrew Bodary. Though the school building has been through a few construction projects in recent years, officials at St. Stephen are aiming to revitalize the school’s spirit with a new logo and website, as well as starting a parents ambassador program and alumni program.

“We are energized by our rich spiritual and academic past that has been formed by the 70 years we have been in existence,” principal Joseph Monte said. “Keeping ties with our past while moving forward with new technology and staying firmly grounded in our Catholic identity drives us forward.”

Monte said the current school building was constructed in stages as the student population grew, including an activity center, cafeteria as well as parish offices. Most recently, a two-room addition for the preschool was added.

St. Stephen's advisory board chair Amy Marvaso said the school engaged students in the process of changing its logo. “We also launched a brand new website, and we are launching new social media platforms,” she added. 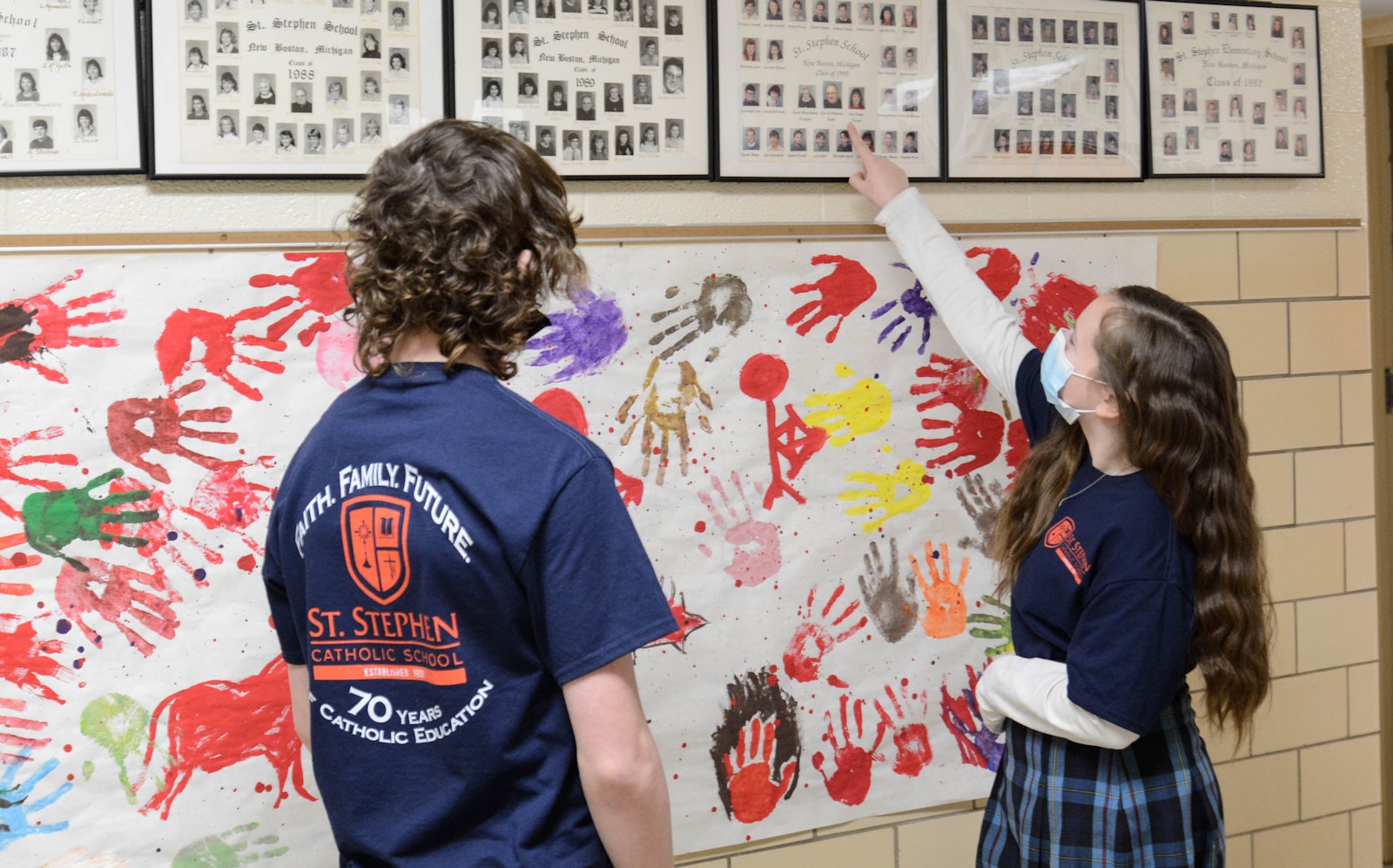 Students point to former St. Stephen School classes as they paint a banner with handprints in the school's hallway.

Marvaso said it was equally important to include alumni in the revitalization plan. This spring, the advisory board plans to begin an alumni outreach initiative, including a dinner, to keep alumni actively involved in celebrations such as the anniversary in the future.

The parent ambassador program, Marvaso continued, “will help assimilate the new families and parents with the senior parents.”

Parents helping parents is important part of continuing the tradition of excellence of St. Stephen, she added.

“The bigger picture is increasing discipleship and meeting parents where they are at,” Marvaso said. “About half of our students are not parishioners” at St. Stephen Parish.

Through the program, “we want to bring all those parents who might not be parishioners on the same page."

Tracy Duran, the mother of two current students and two St. Stephen graduates, said her family initially did not belong to the parish when she registered her children for school, but joined after seeing the how the school community and parish bonded with families.

“When I went to visit the school, I loved the community and the family feeling inside the school,” Duran said, adding eventually the “faithful feeling” persuaded her and her family to join the parish.

To celebrate the anniversary, during Catholic Schools Week (Jan. 30 through Feb. 5), each grade level will dress in period clothing for each decade the school has been open, in addition to other dress-up days, and students will be given special T-shirts with the new school logo. 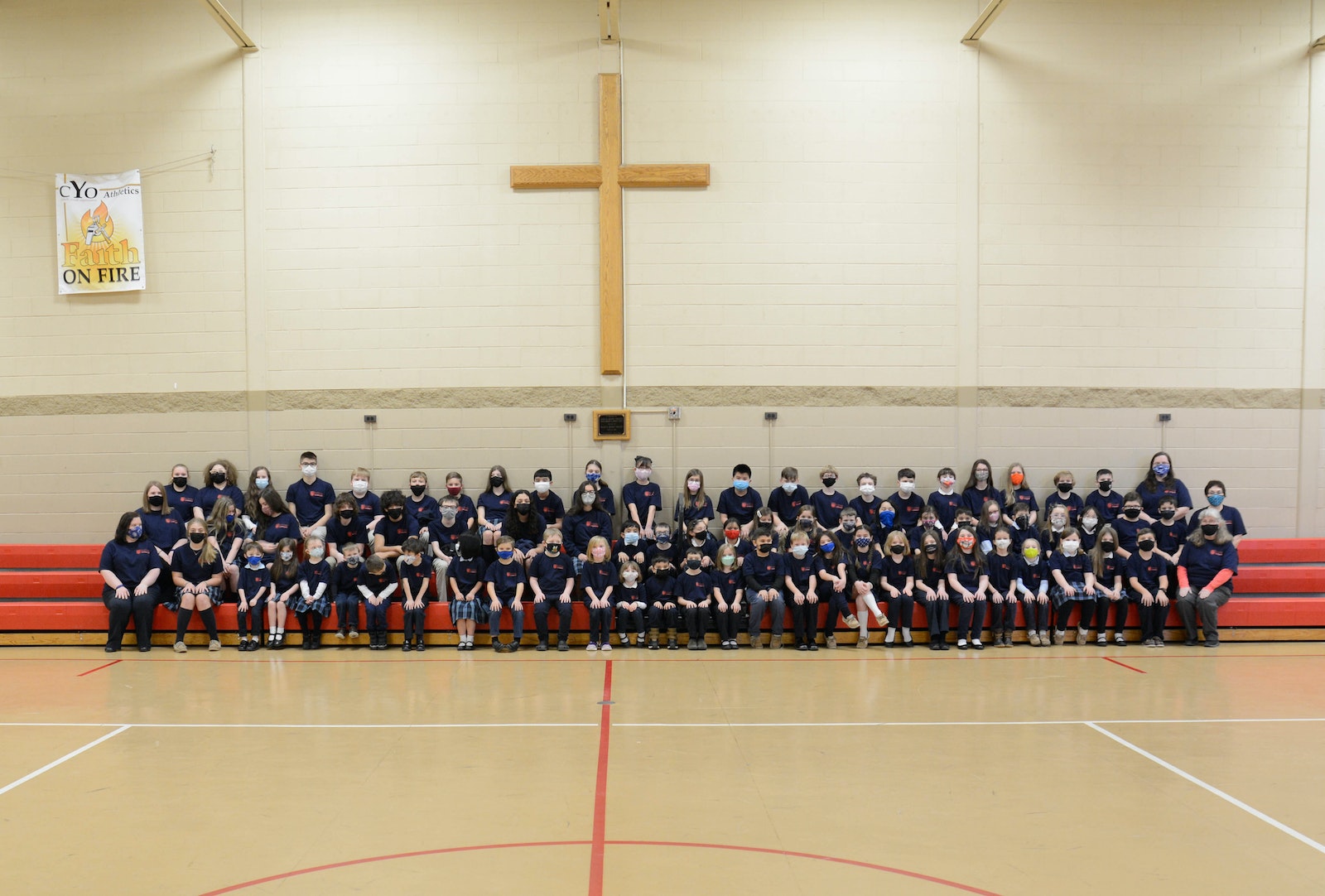 Families cite the strong Catholic identity, connected with St. Stephen Parish, as a reason families decide to send their children to the school, administrators say.

Monte said the school's open house Feb. 27 will be an opportunity for school administrators to show parents and prospective parents why St. Stephen School is special.

“This anniversary drives us to become better at what we are doing to prepare our students to take their place in the world, spiritually and intellectually,” Monte said. “We want our students to be well-grounded in their Catholic Christian faith as they go on to adulthood.”

“I’ve been raised as a Catholic, and I believe my religion is important,” Chloe said. The staff “really care about us and they want to help us learn our religion.”

Fellow eighth-grader Klara Kilanski said the celebrations are opportunities for students to revisit the school’s history and to become part of it.

“I’ve seen pictures on the wall when we didn’t have the addition, and I was here before they put on that addition,” Klara said. “It makes me think about how this school has grown.” 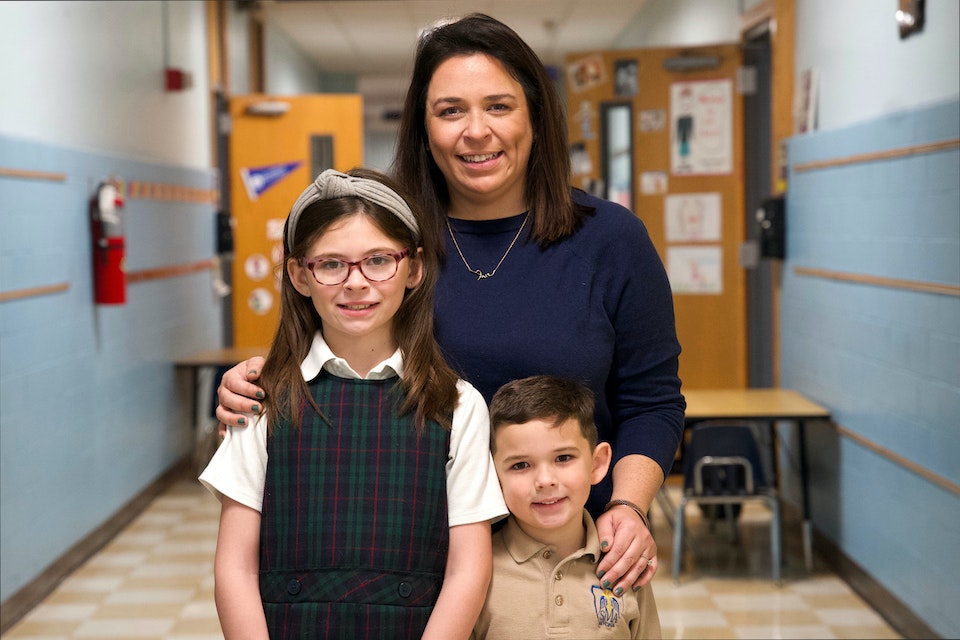 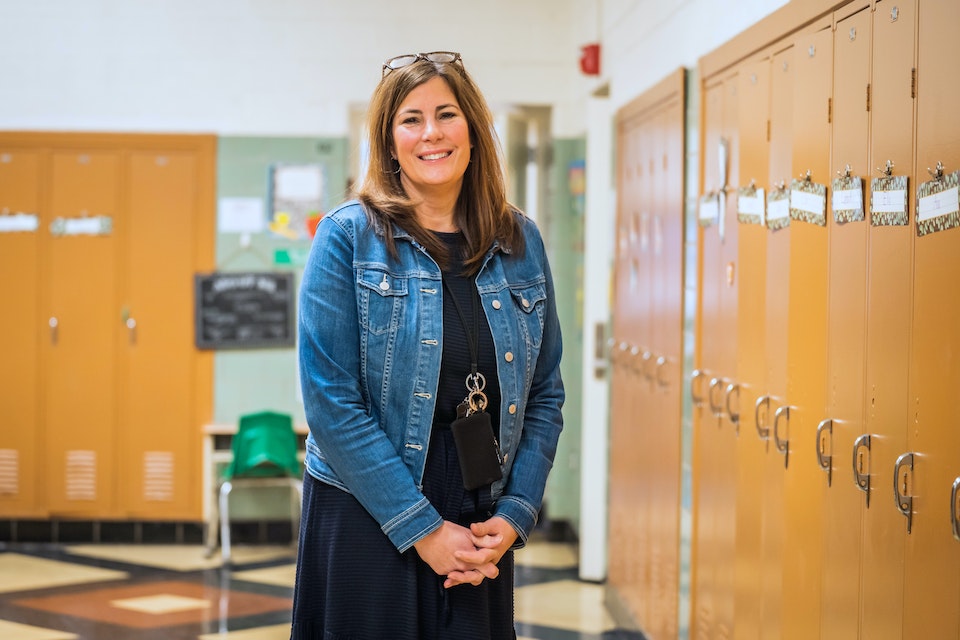