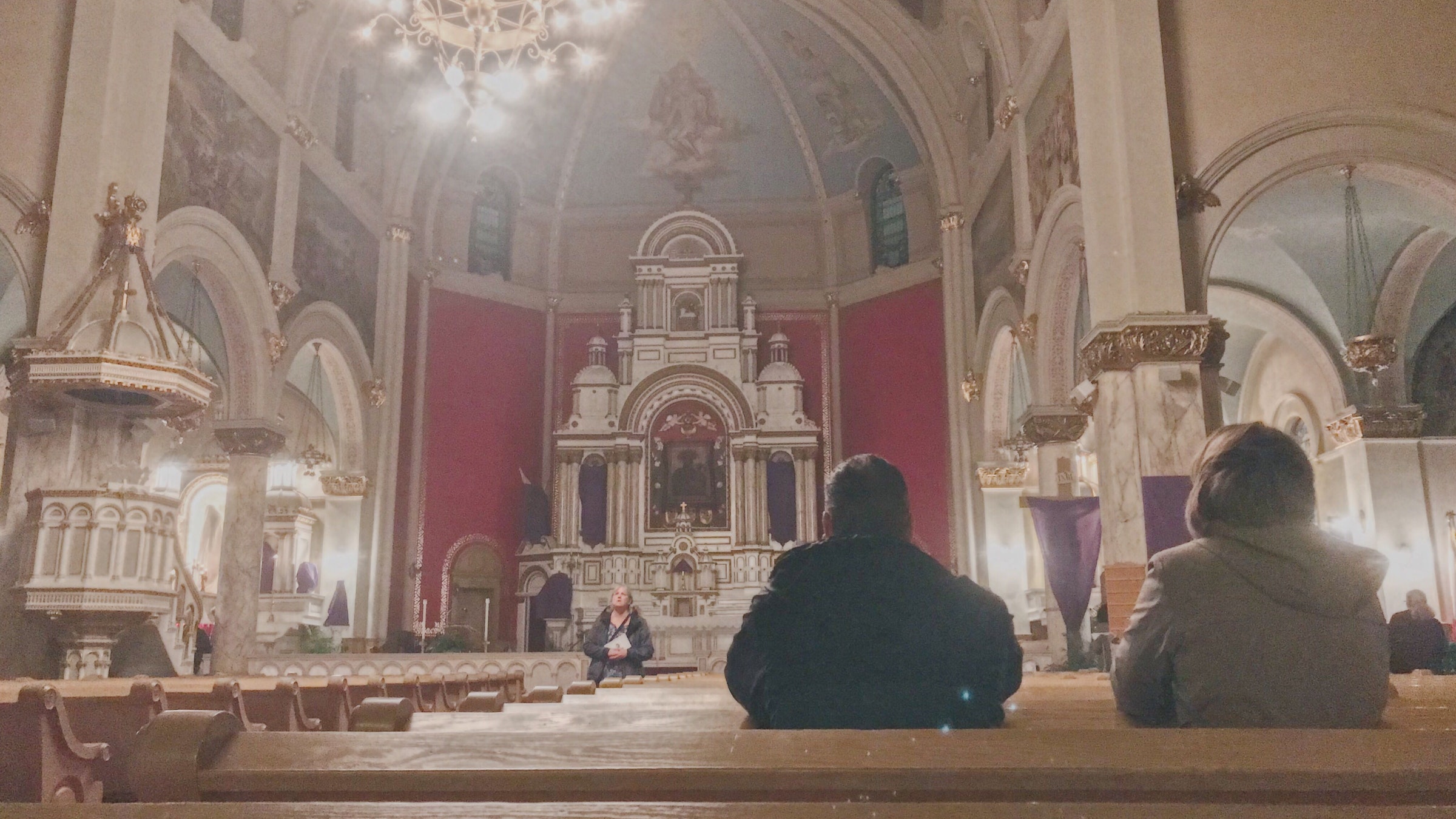 After the Mass of the Lord's Supper on Holy Thursday night, dozens of pilgrims on three buses set out to pray at seven different churches in the city of Detroit, reviving a tradition of devotion practices for centuries in Europe. (Photos by Melissa Moon | Detroit Catholic)

DETROIT — Faithful pilgrims are following the footsteps of Christ this Holy Thursday, all without leaving the city of Detroit.

For the second year, Ste. Anne Parish has organized a “Seven Churches Pilgrimage” in which pilgrims visit seven altars of repose throughout Detroit on Holy Thursday night.

The centuries-old tradition takes its cue from Christ’s capture in the Garden of Gethsemane and subsequent transfer to the hands of the high priest Caiaphas, Herod and Pontius Pilate during the beginning of his Passion.

The pilgrimage is popular in Italy, Poland, the Philippines and Mexico, explained Danielle Center, program director of Ste. Anne, who has organized three buses for pilgrims this year.

“I heard about this tradition two years ago when I was in Chicago, and after talking to the priest for more information, we organized a bus last year and it sold out in a matter of days,” Center told Detroit Catholic. “This year we have three buses, and they sold out quickly. So it received some appreciation.”

Pilgrims will visit the Cathedral of the Most Blessed Sacrament, Our Lady of the Rosary, St. Josaphat, SS. Peter and Paul (Jesuit), St. Joseph Oratory, Most Holy Trinity and Ste. Anne. The three groups have different starting points and visit the altars in a different order, so the groups don’t cross paths.

On the bus, a chaplain leads the pilgrims in reading Scripture — selections from the Passion stories in the Gospel — and songs. Inside the church, the pilgrims are silent and pray at the altar of repose.

“I did the pilgrimage last year out of curiosity, wanting to see the different altars of repose,” said Yuliana Bautista, a parishioner at Ste. Anne. “It was really peaceful and a great way to end a very long day. I just felt submerged in prayer with a crew of people, all from different parishes, but there for the same purpose.

“There was this sort of unspoken support we had for each other,” Bautista said. “I just felt we all understood the Passion a little more. You are moving around Detroit; it’s late at night, kind of quiet. You are following along with Jesus, going to these locations. It is a really powerful experience I recommend every tries at least once.”