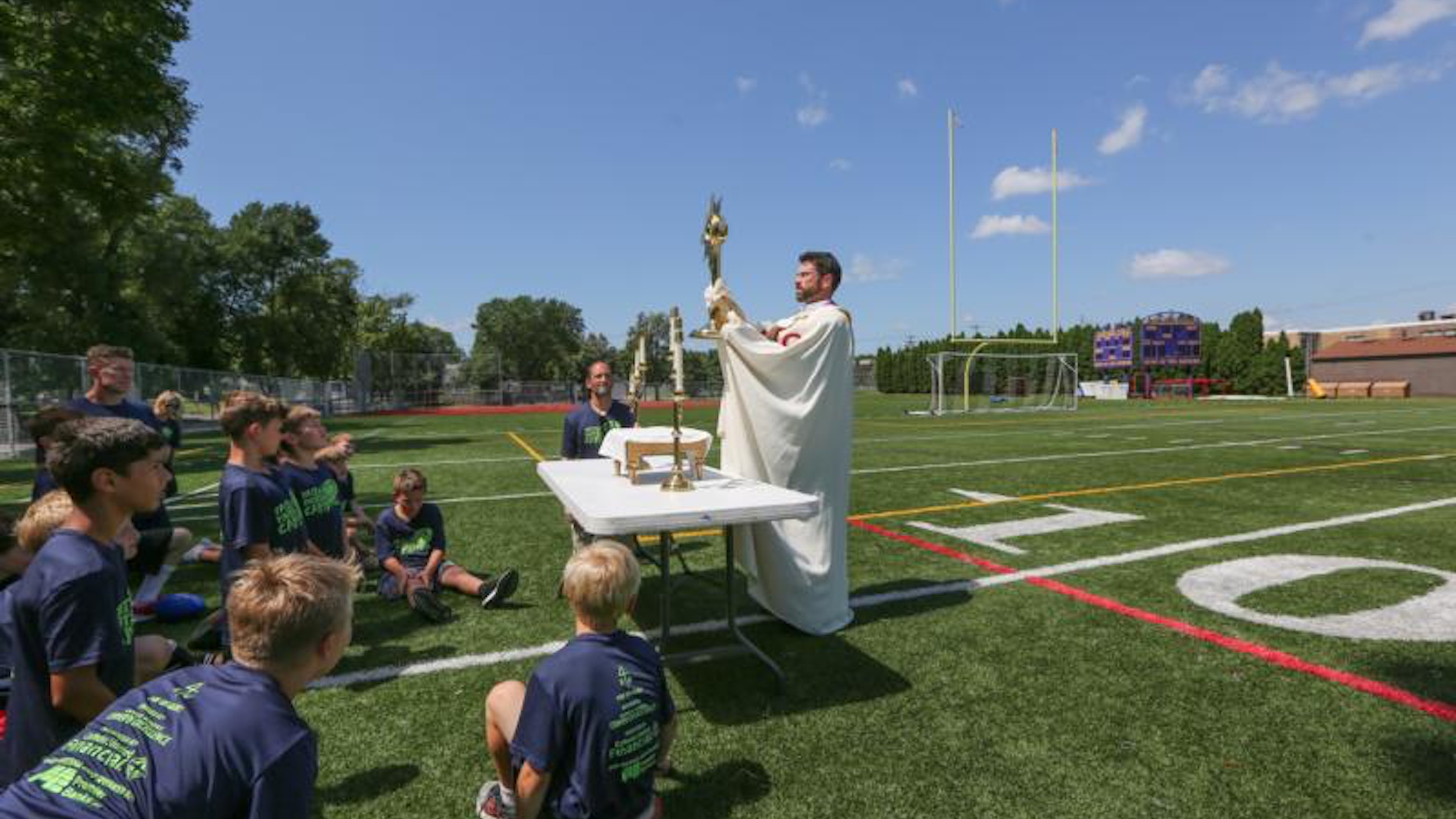 ST. PAUL, Minn.  — Boys on the sideline of the football practice field at Cretin-Derham Hall High School this summer fell silent one afternoon as they waited for the football camp's afternoon session to start.

What they heard next was not a coach's whistle, but small bells carried by someone walking in front of Fr. Michael Daly, parochial vicar of St. Odilia in Shoreview. The priest was not holding a football; he was carrying the Eucharist.

While the 85 boys attending the inaugural Faith and Football Camp knelt on the artificial turf, Aug. 7, Fr. Daly placed a consecrated host in a gold monstrance on a plastic folding table. He recited a few prayers, then circled around the table and knelt with the boys.

Fifteen minutes of silence followed. Observing the boys — and preserving the silence — was Matt Birk, former Minnesota Vikings center and Super Bowl winner with the Baltimore Ravens who played football in the 1990s for Cretin-Derham Hall, archdiocesan high school of St. Paul and Minneapolis.

Birk and several others came up with the idea of a camp for youth combining faith and football that is part of a youth sports initiative Birk launched in 2018.

"Matt Birk and some of us realized it was time to reinvest in our sports in our Catholic schools," said Jim Weiland of Sts. Joachim and Anne in Shakopee, who has coached his three children in youth sports.

The three-day camp featured football drills and scrimmages mixed in with Mass, rosary, Stations of the Cross and adoration. There also were speakers, including Glenn Caruso, head football coach at the University of St. Thomas in St. Paul, Brooks Bollinger, retired Minnesota Vikings quarterback, and Chad Greenway, retired Vikings linebacker. Father Daly heard confessions on the camp's final day. He set up two chairs along a chain-link fence at the edge of the field. Organizers watched 30 boys line up to receive the sacrament.

"I really wasn't expecting that many kids to step up" for confession, said Birk, 43, who belongs to St. Joseph in West St. Paul with his wife and eight children. "It really warmed my heart because that's a sacrament that none of us really like going to, in a certain way. It's intimidating, but these kids popped up and did it. For them to do that just showed a lot of courage."

Birk said he wasn't sure what kind of response it would get and said the fact that 85 boys signed up shows that parents want a different kind of youth sports experience for their children.

Birk does, too, which is why three of his sons came to the camp: Grant, 11, Cole, 9, and Brady, 7. His children play youth sports, but he said there is a lot of pressure in it by coaches who don't allow players to take weekends off for family activities.

He also said "80% of kids are dropping out of organized sports by middle school. And, the number one reason is they're not having any fun."

That's why Birk and camp organizers tried to have more fun and less intensity at the football and faith camp. They kept the drills light and played scrimmages without keeping score. Adults, including Birk, would play quarterback and have all of the boys on offense go out for a pass.

Camp was held six hours each day, with plenty of breaks and free time. Near the end of the day, parents showed up in the bleachers to watch. The spiritual component, they said, was a draw for them in registering their sons for the camp.

Birk plans to do the camp again next year and maybe add another sport. The faith component comes from his own journey. He said he grew up Catholic but fell away from his faith. His road back began in 2002, just after he had signed a $31 million, seven-year contract with the Vikings, which at the time was the largest-ever NFL contract for a center, he said.

"I had worldly success beyond my wildest dreams, yet I was still empty inside," said Birk, who came back to the church when his wife, Adrianna, was pregnant with their first child. He said playing in the NFL from 1998 through the Super Bowl in February 2013 showed him that "football is a very spiritual game."

"To be successful in football, I think, you've got to have faith because it's a hard game to play," he added.

Father Daly, who joined Birk at the football camp, said the camp was an important way to spread the Gospel in a culture obsessed with sports.

"Bringing Jesus onto the sports field is a great sign and witness to them that we can integrate our faith in all that we do, including sports, he said, adding that sports are a "training ground for learning virtue."

"I think if the boys aren't coming to the church," the priest said, "we've got to go to them and meet them where they're at -- literally, on their football field."

Hrbacek is photographer/reporter at The Catholic Spirit, newspaper of the Archdiocese of St. Paul and Minneapolis.