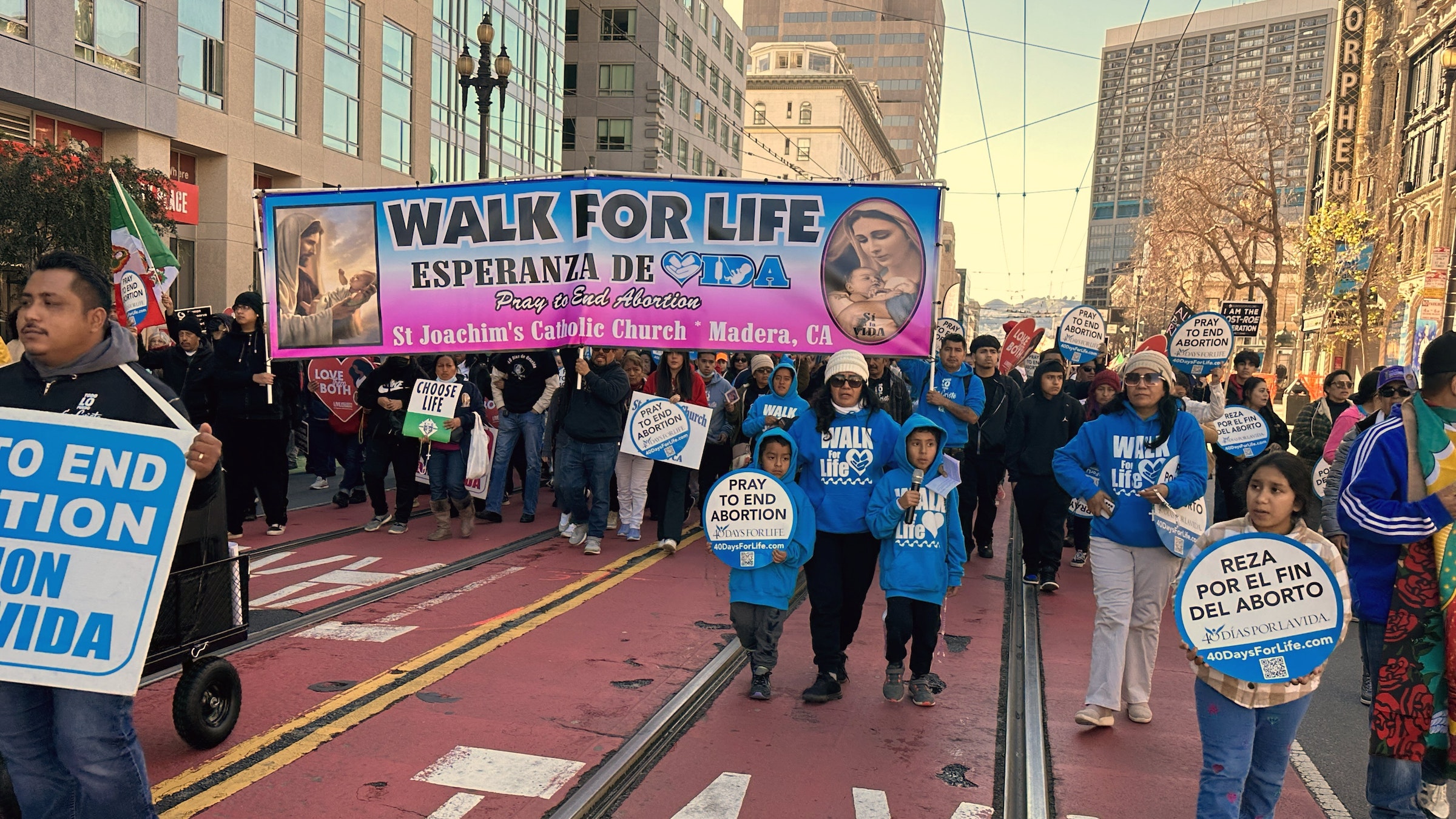 "Both Dobbs and Prop. 1 have reignited the pro-life movement in California and today's turnout shows it," said Eva Muntean, co-chair of the Walk for Life.

The walk stretched more than a mile along Market Street, the city's main downtown thoroughfare, which was closed to traffic for the event.

"I want to speak for the unborn who don't have a voice," said Jesus Garcia, 24, a Cal-State East Bay student from Newark, California, who said this year was his fourth year at the walk. Garcia held a handmade sign that said, "Abortion is violence against a human life. Not health care or a woman's right!"

"After Roe, we decided to come and bring the prayer here where it was needed," said Deacon Kevin Stephenson of St. Benedict Parish in Broken Arrow, Oklahoma, who with his wife, Monica, brought 20 high school students from the parish youth group, including two of their own children. Last year, they went to the March for Life in Washington. "It's our kids who wanted to come here. We just followed the Holy Spirit."

For California, the June 24 Dobbs v. Jackson's Women's Health Organization ruling that overturned Roe and returned abortion to the states is bittersweet: voters in November approved by nearly 67% Proposition 1, enshrining a state constitutional amendment legalizing contraception and abortion with no restrictions until birth.

Gov. Gavin Newsom and the Democrat majority in the state legislature placed the constitutional amendment on the ballot shortly after the Dobbs ruling was issued.
Demonstrators supporting legal abortion came out in greater numbers too, albeit much smaller than the Walk for Life marchers. About 200 gathered on the corner of Civic Center Plaza, jeering often obscene slogans and waving signs, as the crowd exited the rally site to begin the mile-plus walk. A half-mile away, at the Cathedral of St. Mary of the Assumption, the sidewalk and even parts of the edifice were defaced with vile, threatening graffiti.

"They do not know what to do because they have realized for the first time in 49 years that they have to defend this barbaric surgery that is built on violence and you cannot defend it," said Shawn Carney, co-founder, president and CEO of 40 Days for Life. He noted that across the U.S. pregnancy resource centers outnumber abortion providers 5 to 1. He said 36% of Planned Parenthood facilities have shut down in the past decade.

"Women do not just show up and have an abortion," said speaker Angela Minter, president and co-founder of Sisters For Life Inc., who has dedicated her life to mobilize particularly the historically Black Church to end abortion. The married mother of three living children had two abortions in her late teens. "Someone needed to enter my world and tell me that you can do it, you can have your baby -- but there was no one there to do it," Minter said.

Rebecca Kiessling, an attorney and international pro-life speaker, was born after her mother was raped. She told the crowd, "I did not deserve the death penalty because of the crime of my biological father."

The Rev. Clenard Childress Jr. has spoken at almost every Walk for Life, beginning with the first one in 2005. This year the walk gave him its St. Gianna Molla Award, with Muntean comparing him to the prophet Isaiah, calling him a pro-life hero and "one of America's greatest orators."

The day began with a special pro-life Mass at St. Mary's Cathedral, composed by Chris Mueller at the request of Archbishop Cordileone, featuring the St. Brigid Catholic School children's choir.

Bishops Robert F. Vasa of Santa Rosa, Myron J. Cotta of Stockton and Jaime Soto of Sacramento concelebrated the Mass along with a number of priests.

When Archbishop Cordileone commissioned the special Mass, he believed it would bring notes of beauty and hope to the looming 50th anniversary of Roe. Instead, the sacred music of the Mass of the Memorial of St. Agnes, Virgin and Martyr, marked the first post-Roe Walk for Life.

"Little did I know, nor anyone else for that matter, that there actually would be something happy to celebrate," the archbishop said in his homily. "What so many of us dreamed of, prayed for and worked hard for during the course of half a century came to pass: the overturning of this monstrous decision."

"While the now historic Dobbs decision is a great step forward in building a culture of life in our society, in another sense it adds new and even greater challenges, especially here in our own state of California, which promises to be a so-called 'sanctuary state' for abortion" with the passage in November of a state constitutional amendment protecting unrestricted abortion until birth, Archbishop Cordileone noted.

This year, as every year, the walk organization sponsored an info fair with pro-life pregnancy and abortion healing ministries.

The Walk for Life weekend included the Standing Up 4 Life rally in Oakland Jan. 20, where speakers emphasized the special toll that abortion has taken on the African American community. Sts. Peter and Paul Church offered all-night Eucharistic adoration.

At St. Dominic Catholic Church's evening Mass and prayer vigil Jan. 20, Bishop Soto acknowledged the discouragement many felt when a statewide campaign to stop Prop. 1 failed, but he reminded those gathered that God is faithful.

"We are not here to take up our own journey but the journey with the Lord Jesus, wherever he may lead us," Bishop Soto said in his homily. "Too easily can we be tempted to let our purpose and methods be contaminated by the discordant manners and demented methods of the day … we cannot predict in what manner the Lord Jesus will bring about his kingdom.

"But we are called to remain faithfully in his company to seek to make his wisdom and mercy known to others."

Founded in 2005 by a group of San Francisco Bay Area residents, the Walk for Life West Coast's mission is to change the perceptions of a society that thinks abortion is the answer.