The deacons’ wives: Heart of the domestic church, backbone of the family 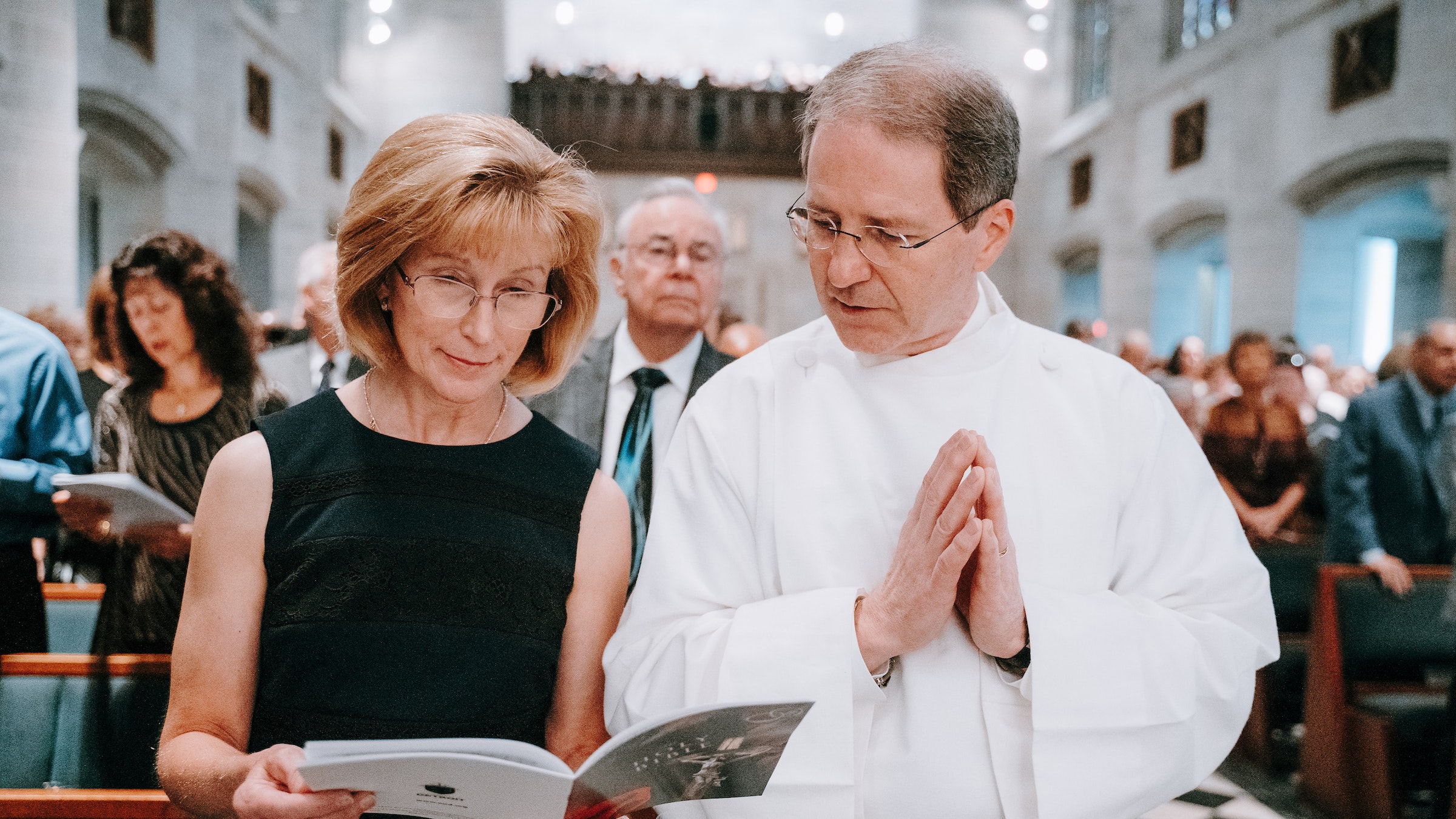 Deacon Michael Van Dyke, who serves at the Cathedral of the Most Blessed Sacrament in Detroit, sings with his wife, Juanita, during his ordination Mass in October 2019. While often in the background, deacons’ wives serve a critical function in the life of the Church, keeping their husbands grounded and sharing in the joys, sacrifices and blessings of ministry. (Valaurian Waller | Detroit Catholic)

As deacons support the Church, wives support their husbands through prayer, sacrifice and commitment to a unique vocation

DETROIT — Behind every great man, there is a great woman, or so the saying goes.

In the Church, this is often felt in the strong, steady and loving presence of mothers and wives –– such as Our Lady, St. Monica or St. Anne. In the modern Church, nowhere is it felt more than in the daily lives and humble service of the wives of permanent deacons.

RELATED: Meet the three men who will be ordained permanent deacons Oct. 2

Deacons perform weddings, baptisms, house visits, funerals, provide marriage prep and teach RCIA. They go where needed. They assist priests in bearing the often weighty role of ministry to the body of Christ, while also serving their own unique purpose and role in the life of the Church.

Behind the majority of permanent deacons — by some estimates, as many as 93 percent of today’s active deacons are married — is a strong, caring woman offering a soft place to land and a voice of reason that goes unseen by a majority of the congregation.

What the faithful don’t always realize is that by supporting their husbands as wives, confidants and partners in prayer, the deacon’s wife helps support the Church as a whole.

“The deacons need their wives; they need that support, they need the guidance, they need the sharing,” said Karin Stewart, wife of Deacon Mike Stewart, who serves at St. Mary Parish in Monroe. “You know, that is what is important. That’s what makes them good deacons.”

According to Deacon Christopher Beltowski, associate director of the permanent diaconate in the Archdiocese of Detroit, a man cannot become a permanent deacon without the written permission of his wife. The wife is integral to the vocation because, with the diaconate, God is not calling men out of their marriage, but rather, he is calling both husband and wife forward, Deacon Beltowski said.

And while it is only a sacrament for the man, a deacon enters his new vocation having already received the sacrament of marriage, which unites man and wife as one. Thus, her role becomes inseparable from the life of the Church.

“It doesn’t mean that the wife is being ordained, but they have a certain support role and they are a part of (the vocation),” Deacon Beltowski said. “Ultimately, the deacon and his wife are examples of the domestic church, the domestic family in the Church.”

“It was a beautiful thing; there were no worries, no doubts. At that point it felt so good,” Poyer said.

Wives struggle with the fact that their calling is not always so clear, Poyer said, so it is consoling to receive confirmation of the wife’s unique calling along the way.

“You see the men for four years are following what they believe is a calling and getting these signs, signals and confirmation,” Poyer said. “It’s not something that wives tend to get; the signs are more subtle. You get it through the peace of seeing what your husband and you as a couple are going through. We are being called as a couple.”

Shelia Breen, whose late husband, Deacon Kevin Breen, served as the archdiocese’s associate director of deacons until his passing in January 2021, emphasized the importance of the domestic church –– the diaconate cannot work if the home and marriage are not taken care of first, she said.

“John Paul II talked about the domestic church, and years ago when our kids were little and I first heard him say that, it struck me that we are the domestic Church; the family is the basic cell of society, and just like in a body, if your cells are dying you’re not going to grow,” Breen said. “I think that we can certainly be witnesses of marriage, and what love and sacrifice look like.”

Breen said a deacon’s role will change and adapt depending on his assignment and season of life. As Deacon Breen’s role evolved, she needed to learn to be there for him in new ways. As the couple changed and grew prayerfully with the diaconate, their marriage grew as well, she said.

Poyer said the marital bond is part of her husband’s vocation to the diaconate, but the diaconate doesn’t take away from the marriage, but adds to it.

“Everything that God does is good, so he is never going to take away from a couple, from a woman,” Poyer said. “Whatever gifts God gave you at your baptism, you are going to still have those gifts and put them to use — and even in a larger way when your husband is ordained because you are serving a larger group of people. You don’t give up anything; whatever spiritual gifts you are given are still yours.”

For her part, Stewart describes her role as a barometer or conscience, helping Deacon Mike determine when he is stretching himself too thin and when he is needed elsewhere.

“We are the ones who have to pull back and say, ‘No, you can’t do that,’” Karin Stewart said.

This role begins the moment an aspiring deacon and his wife begin the discernment process. For Stewart, the time commitment required of the vocation was initially a concern for her, and she spent time in discernment of her own.

When Deacon Mike began considering the diaconate, he and Karin were raising three daughters, while he worked full time and Karin worked occasionally. The process, Karin explained, is intensive, involving years of schooling and a long period of evaluation. Deacon Mike spent this time taking classes, working with spiritual advisers and undergoing his psychological exam.

“Meanwhile, you’re trying to balance home life, family life, and formation life,” Stewart said. “Somehow, it all worked out. I don’t know how it did. We just felt that was the Holy Spirit. The Holy Spirit was helping us, guiding us through and we felt relief.”

Listening to God and trusting despite the fear of the unknown is crucial to finding balance, Stewart said. It’s also important to talk with other diaconate couples who’ve faced similar situations.

“The women have such a close bond. It’s wonderful to be sharing this journey with the other women who are in the same boat feeling and experiencing the same things,” Stewart said. “Whether it’s apprehension, joy or whatever emotion it is, we all feel it together. We can all relate to each other.”

While a deacon’s wife doesn’t have to participate in parish ministry alongside her husband, many do. It’s common for deacons’ wives to lead marriage prep, catechism or a host of other ministries as a way to support the parish.

“Everybody makes it their own unique role,” Stewart said.

One of the blessings that comes with the diaconate is that some people feel more comfortable relating to deacons because of his role as a married man, with children and regular problems of day-to-day life. With this, however, comes sacrifice, Stewart said. The time commitment is great, and the wives often find themselves alone, whether on holidays or simply sitting alone in the pew at Mass while their husbands serve.

“There is not a lot of free time or spontaneity,” Stewart said. Vacations have to be planned well in advance, and sometimes plans are changed because of an emergent need, such as a funeral.

“It involves a lot of family sacrifice that others might take for granted,” Stewart said. “Sharing him with other people can be challenging. That’s why we try to do things together as much as possible, even if it’s just going to his office and helping with filing or reorganizing. We try to do as much as we can together.”

Amidst the sacrifices, there are joys, too.

“(Deacon Mike) witnessed two of our daughters getting married –– he’s the one who was the officiant at their weddings, and he baptized our grandchildren,” Stewart said. “Those are things most people can’t experience. Those are beautiful joys.”

Deacons themselves are deeply aware of their wives’ importance. For Deacon Stewart, he sees the joy of his vocation unfold through Karin.

“There’s just an innate joy in her –– a practical joy that is not contrived at all,” Deacon Mike said. “When we’ve gone to the third funeral in three days and two people that I have been working with are in hospice, those can be tough days where I just tap heavily into her joy.”

Deacon Beltowski said his wife, Sharon, teaches him, too.

“She has an inherent ability to be alone and be there when I come home and be their for me –– I don’t have that ability to be alone,” Deacon Beltowski said. “And she is far stronger than I am. She is the one who makes it all happen. Just as she does with the family, she makes it all come together. When the deacons receive the burdens of others, the wives receive it all.”

To learn more about the permanent diaconate in the Archdiocese of Detroit, or to inquire about discernment events, contact Deacon Christopher Beltowski, associate director for permanent deacons, at [email protected].