There’s no argument: Loyola’s debate team is among the country’s best 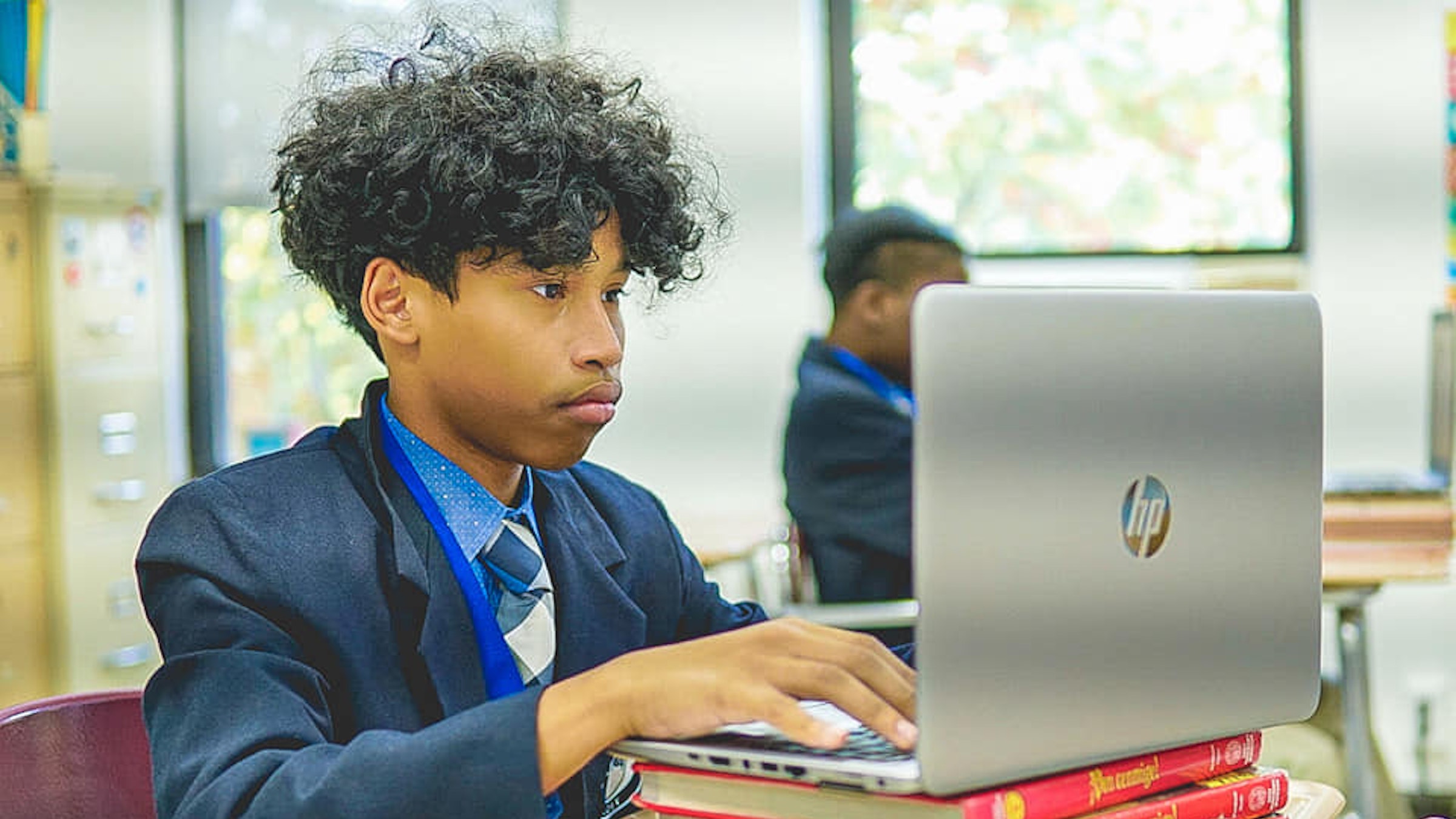 Sophomore Alex Mayers, a member of Loyola High School’s vaunted debate team, studies his argument in preparation for an upcoming tournament. Loyola’s debaters have proven themselves among the top debate teams in the country, competing in national tournaments such as Yale University’s Invitational Debate Tournament, in which the Bulldogs placed 15th out of 396 schools nationwide. (Photos courtesy of Loyola High School)

Debate team promotes analytical thinking, confidence in young men as they take on the nation’s toughest debaters in tournaments — and win

DETROIT — They are affable, articulate, and all-around good guys. But don’t get in a debate with them: you’ll probably lose.

This fall, the eight members of Loyola High School’s debate team have been cleaning up at tournaments, continuing a nine-year tradition of excellence in the debate arena for the all-boys Catholic, Jesuit high school in northwest Detroit.

Kathryn Gross teaches Spanish and other subjects at Loyola, and has been coaching the debate team since its inception.

“After our very first tournament, one of our boys who won a trophy came to me and said, ‘Ms. Gross, I’ve seen all those movies on TV where kids get trophies, but I never thought I’d get one because I’m not an athlete,’” Gross recalled. “He started crying and I started crying. That was the beginning, and it’s been one trophy, one medal, one story after another, year after year.”

Gross likes to stump others with this trivia fact: the Loyola debate team has won six state championships, more than any of the school’s athletic teams. The team is the top policy debate team in Michigan, as ranked by the National Speech and Debate Association. In early October at the Yale University Invitational Debate Tournament, held virtually, Loyola ranked 15th out of 396 schools.

Loyola participates in policy debate, which is more involved than other categories of debating. Policy debaters typically work in teams of two and spend hours each week researching their topic and compiling hundreds of pages of files to analyze.

At a debate, each contestant is given eight minutes to present evidence to support their affirmative or negative perspective, followed by three minutes to cross-examine his opponent. Finally, debaters give a five-minute rebuttal speech. Judges then cast ballots to determine the winner. Winners of each round go on to compete against other winners until a final team stands. At a weekend debate, rounds of competition can begin on a Friday night and continue through Saturday, and sometimes into Sunday.

This year, the national topic for high school debate teams is “criminal justice reform” in the areas of forensic science, policing and sentencing.

“Debating is a learned skill that promotes analytical thinking, quick and efficient information processing and the ability to articulate thoughts and ideas in a calm yet convincing matter,” Gross said in a press release after the Yale tournament.

Always learning (and laughing) together

As someone who admits he enjoys “proving himself right” in conversation, sophomore Darnyl Copeland signed up for the debate team last year thinking it would be easy. Once on the team, he realized it would challenge him more than he expected.

“It wasn’t just a simple argument. You actually had to know what you were talking about,” said Copeland, who added his verbal skills have increased since joining the team, and he now feels more comfortable talking to people about substantive issues.

“It’s a lot of work, but (my teammates) make it fun. We’re really a brotherhood,” Smith told Detroit Catholic. “No one really wants to get up on a Saturday and spend 10 hours at a debate, but we know we’ll still have fun. At the end of the day, we can sit around and laugh at each other, and then give each other constructive criticism. You just can’t lose with this team — even when you lose, you can’t lose.”

Both Copeland and sophomore Alexander Mayers look up to their senior team members and try to glean advice from them. Mayers also learns from his opponents.

“I’ll ask if I could email them afterward to get their thoughts on how I could improve,” Mayers said. “You learn a lot by being in debate.”

Gross will register for debates even when she knows the team will likely lose, because she knows the challenge helps the boys improve.

Jeremiah Lewis is a senior who joined the debate team as a sophomore. Now, he’d recommend it to anyone.

“I took a speech class, but I’ve learned to be an even better speaker because of debate. I can convey what I want to say better. Debate has boosted my confidence a lot,” Lewis said.

The debate season begins in September and ends with nationals in April, but for many on the Loyola team, it’s a year-round activity.

The application process for summer debate institutes and camps begins in March. As members of the Detroit Urban Debate League, Loyola students may qualify for scholarships to camps including a six-week intensive debate camp run by the Spartan Debate Institute at Michigan State University. At least one student gets accepted to the program each year to attend with other high school students from around the world.

“A hallmark of Jesuit pedagogy is to engage students in debates when learning so that they might deepen their knowledge and hone their ability to articulate their beliefs,” Fr. DeLeon said. “This formation in the Jesuit and Catholic tradition is essential to how we instruct our students on a daily basis, empowering them to give voice to who they are and what they believe.”

Being part of a debate team takes that formation to another level.

“All of our students receive four years of theology at Loyola, but our young debaters develop additional skills that can help them celebrate, explain and even — when necessary — defend our faith. It helps them to go forth confidently proclaiming the Word of God.”

“All of us at Loyola are immensely proud of the debate team and coach Kathy,” Smith said. “Their prep and performance are determined and genuine. It’s not done in front of cheering fans, and it doesn’t garner the attention of the multitude, but it makes them better students and better persons all the same. Our mission is to form well-rounded students who become positive, contributing members of society and our debaters exemplify the ideal of Men for Others ... Men for Detroit.”

The boys’ experience in debate not only gives them skills that will help them in their life after high school; it’s also shaping their dreams for the future.

Lewis plans to be a writer and psychologist. Mayers would like to attend an Ivy League school and become a neurosurgeon. Copeland intends to apply his debate skills directly to his plans to be a lawyer. Smith will also go to law school and has his eye on the Supreme Court bench. This week, Smith received a scholarship offer from the Michigan State University debate team for next fall.

“All the guys on the team grow so much each year. They show you how smart they are, how creative they are, and it gives you energy,” Gross said. “You feed off of their intellect, their hard work. The fact that they’re willing to do it, and do more than what’s expected — what more could you want as an educator?”