Three ordained to the diaconate, tasked with sharing the ‘sacred blood of Jesus’ 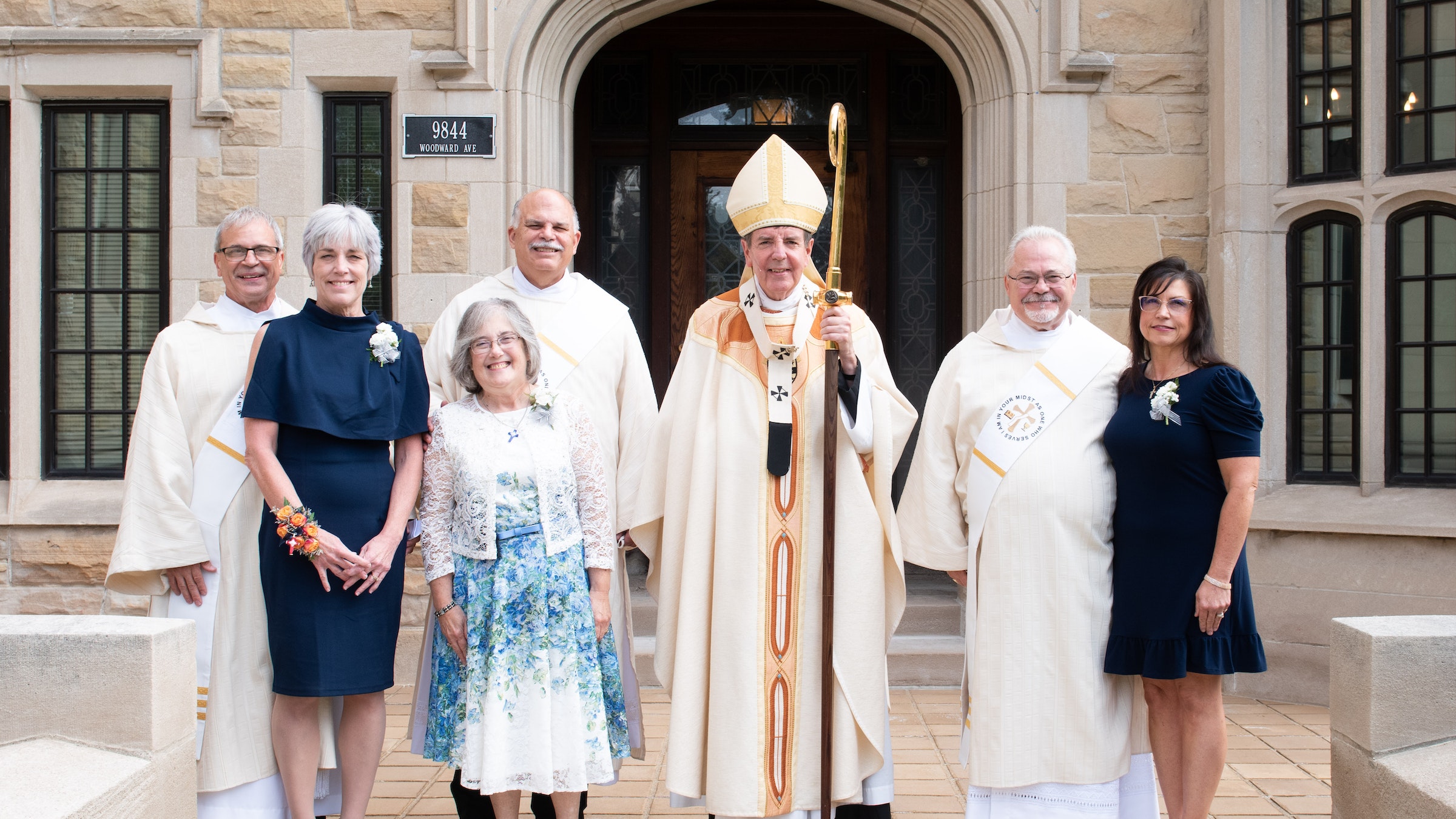 Left to right, Deacon Richard Kliemann and his wife Carol Annette, Deacon Michael Merlo and his wife Mary Alice, and Deacon Charles Dault and his wife, Debi, pose with Archbishop Allen H. Vigneron outside the cathedral rectory after their ordination Mass on Oct. 2. (Photos by Tim Fuller | Special to Detroit Catholic)

Deacons Dault, Kliemann and Merlo’s transformation are signs God is still at work in our times, Archbishop Vigneron says

DETROIT — Three men have been permanently transformed to serve God at the altar, but much like the prophet Jeremiah, they are fulfilling the role God had always intended for them to fill.

That’s what Archbishop Allen H. Vigneron told Charles Dault, Richard Kliemann and Michael Merlo before they were ordained to the permanent diaconate for the Archdiocese of Detroit on Oct. 2 at the Cathedral of the Most Blessed Sacrament.

The permanent diaconate was re-established in the Roman rite Catholic Church in 1967 by Pope St. Paul VI, but the origins of the diaconate in the Church go back to St. Stephen in the Acts of the Apostles.

“The Lord Jesus, by the power of the Holy Spirit, continues to be at work in the Church, continues saving events,” Archbishop Vigneron said during his homily. “We are no poorer than the disciples like Lazarus, Martha, Mary and Paul. We are here in the cathedral today to be present at one more saving action of God: witnessing these men be turned into deacons, a pouring out of the Holy Spirit.”

By accepting the call to the diaconate, Deacons Dault, Kliemann and Merlo were taking on a new stage in their life, one that consists of dedication to God and His Church, preaching the Gospel at Mass and living the Gospel every day, the archbishop said.

“We understand in your coming forward to be ordained, you’re presenting yourself to the Word of God,” Archbishop Vigneron said. “You are responding to an invitation to make an invitation to others to follow Christ.”

Recalling the readings from Jeremiah and Ephesians — read by Debi Dault and Mary Alice Merlo, wives of Deacons Dault and Merlo — Archbishop Vigneron added that while God had destined for these men to serve at His table, they still had to answer God’s calling with a ‘yes.’

“You will be made different by this ordination; what we mean is that this can never be repeated. We can’t ‘un-deacon’ you after today,” Archbishop Vigneron said. “This is your life unto eternity. You are marked by what God will do to you today. As we hear Jeremiah, you, too, are called by name, but in that call, the meaning of your name changed.”

After the homily, the three men to be ordained presented themselves before the archbishop, promising to fulfill the roles of the office of the diaconate.

Archbishop Vigneron laid his hands on the men to ordain them, after which the men were vested as deacons and received the Book of the Gospels from the archbishop with a stern command.

“Receive the Gospel of Christ, whose herald you have become,” Archbishop Vigneron said, reading from the prayers of the ordination rite. “Believe what you read, teach what you believe, and practice what you teach.”

Deacon Kliemann, who has been assigned to St. Augustine Parish in Richmond, delivered the commencement address for the diaconate class.

“We first thank God almighty, who through so many people in our lives guided us to this moment today, hearing this call to the podium and His Church,” Deacon Kliemann said. “We are most grateful to Archbishop Vigneron for ordaining us today. We thank you for your leadership in the Archdiocese of Detroit in ‘unleashing the Gospel’ and guiding us as we more forward as the body of Christ, showing us by example, your ministry for sharing Jesus Christ to the people of God.”

Speaking on behalf of Deacon Dault, who will be assigned to St. Pius X Parish in Southgate, and Deacon Merlo, who is going to St. Damien of Molokai Parish in Pontiac, Deacon Kliemann thanked the Sacred Heart Major Seminary teaching community, the diaconate formation team and everyone who supported them in their years of formation.

“We have been the recipients of prayers from our family, our children, our friends and people in the entire archdiocese,” Deacon Kliemann said. “For these prayers, we are so grateful, as they have brought us through our journey here, now being sent out to proclaim the Word to all the people. We ask you, continue to pray for us and our wives, as Deacon Mike, Deacon Chuck and I begin our new role as servants to the people of God.”

The day was a culmination for the wives of the ordained as well, who not only play a supporting role in watching their husbands go through this spiritual transformation, but who also take an active role in formation and their own vocation as deacons’ wives.

“We participated in the formation process from the very beginning,” Debi Dault told Detroit Catholic. “We could go to classes and formation weekends, where I had a very good experience. This whole process has brought us together. We are closer as a family, and our faith has been strengthened through this.”

Debi Dault added her husband was turned away from the diaconate program the first time he applied, but through encouragement from friends, he applied again was accepted.

Likewise, Deacon Merlo initially began discerning the diaconate years back, but was initially turned down.

“He started the process about eight years ago, but wasn’t accepted, so he retired from his job and started serving in the archdiocese in other places,” Mary Alice Merlo said. “The same deacon friends we had kept nudging him again, saying after three years you can reapply. He was really hesitant, but applied again, but this time they said yes.”

The deacons will take up a three-fold ministry: performing and directing works of charity, serving and proclaiming the Gospel at Mass and in day-to-day living, and ministering at the altar, Archbishop Vigneron said.

Like the great martyr St. Stephen, deacons today must care for the blood of Christ with the same zeal and enthusiasm, the archbishop said.

“As you deacons have heard me preach before, this dimension of your ministry is typified in the entrustment of the chalice of the Precious Blood of Jesus Christ to you,” Archbishop Vigneron said.

“And as a parenthesis, it’s a terrible thing when people speak of the Holy Eucharist under the appearance of wine, as if they were drinking wine. That’s so little,” the archbishop added. “Have you ever stopped to realize that we drink the very blood of Jesus Christ that was poured out on the cross? This is the blood, the blood that was shed on Calvary, and you are entrusted with that chalice. Not to guard and hoard it, but to share it, to invite others to lay down their life for the Father.

“You are transformed in this sacred rite, not for your own sake, but in service of the plan of our Father, to deliver us from Satan.”

To view a recording of the Mass of ordination for Deacons Merlo, Kliemann and Dault, visit https://www.aod.org/livemasses.