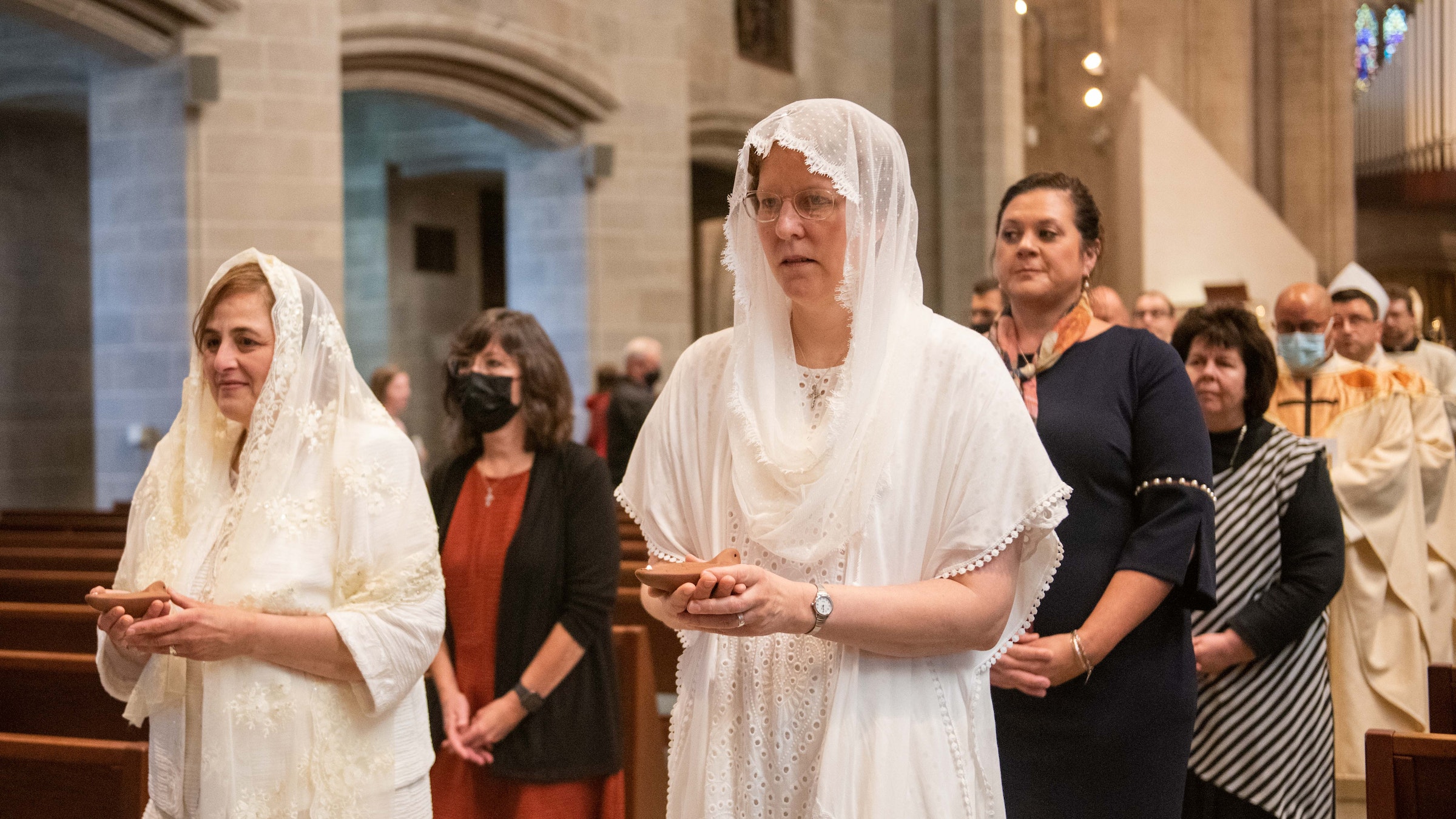 Hanan Ismail, right, and Amanda Ross hold oil lamps in a symbolic rite during a Sept. 25 liturgy at the Cathedral of the Most Blessed Sacrament in which the two women were consecrated as “virgins living in the world.” Ross and Ismail bring the number of consecrated virgins in the Archdiocese of Detroit to seven. (Photos by Tim Fuller | Detroit Catholic)

DETROIT — On Sept. 25, Amanda Ross and Hanan Ismail lay prostrate before Christ in the Eucharist at the Cathedral of the Most Blessed Sacrament and vowed themselves to the Lord as consecrated virgins.

During a liturgy rich in symbolism and imagery, Archbishop Allen H. Vigneron presided over the consecration of Ross and Ismail — the third such consecration in the past five years in the Archdiocese of Detroit.

Ross and Ismail bring the total number of consecrated virgins in the archdiocese to seven, adding to a worldwide movement of women who are choosing to live a radical, ancient vocation as brides of Christ in the world.

The small, but growing, presence of consecrated virgins in the archdiocese mirrors something of a trend seen nationwide, said Judith Stegman, JCD, president of the Lansing-based U.S. Association of Consecrated Virgins.

The vocation dates to the early days of the Church, and is considered the first form of consecrated life, Stegman said.

“Women in the early Church would go to the apostles and ask to be consecrated as a bride of Christ,” Stegman told Detroit Catholic. “This has always been an act of the Church through the bishop (consecrating) women; the setting aside and setting apart of the person as a bride of Christ.”

Although there is no formal registry for the number of consecrated virgins, Stegman said that according to USACV records, there are 267 living consecrated virgins in the United States and 40 who have passed away since the order was restored.

Stegman said while the majority of dioceses in the United States have only one, if any, consecrated virgins, there has been an uptick in consecrations in recent years, especially with multiple women being consecrated together.

“I think as the consecration becomes more well-known, and more dioceses have several consecrated virgins, it is attractive to women to find out about this vocation,” Stegman said. “It is still not the norm to have more than one, but it is becoming more frequent.”

The Order of Virgins was restored in 1970 as a distinct form of consecrated life in the Catholic Church.

As the early Christian church grew amidst a pagan society, virginity became something radical that women could offer to the Lord, said Karen Ervin, who was consecrated in the Archdiocese of Detroit in 2017 along with Laurie Malashanko and Theresa Jordan, a first in the local Church’s history. According to some records, it also was the first time three women had been consecrated together in U.S. history. Their consecration was followed by Michelle Piccolo’s in 2020, making her the fourth.

Ervin chose life as a consecrated virgin following a profound conversion she experienced in her early thirties.

“I knew I was called to religious life as a little girl, but I basically said no to that life,” Ervin said. “When I hit my 30th birthday, I crashed and burned because I was so unsatisfied and had so much discontent with where my life was headed. The Lord kept telling me he wanted me to be his bride — to be in the world but not of it — but I had never seen that and didn’t know what that was.”

Ross and Ismail’s consecration brings the small community — a term used loosely, since the women don’t live together or share a common lifestyle — to seven, including Sue Cummins, who was consecrated in 2002 in Lansing but now lives in Metro Detroit.

According to Stegman, 10 dioceses in the U.S. have five or more consecrated virgins, and just four have seven or more. Along with Detroit, the others include the Diocese of Lansing, the Archdiocese of Boston and the Archdiocese of St. Paul and Minneapolis.

Stegman said she is seeing more women being consecrated in dioceses where the bishop is responsive to the vocation and views it as beneficial for the whole people of God — a true, life-giving union.

“Consecrated virginity is a true marriage in the sense of what the intimacy of marriage is supposed to be: the irrevocable, the unitive,” Stegman said. “The marriage of the Church as the Bride, and Jesus as the Bridegroom is the archetype for marriage.”

“We remember them in the liturgy, what they offered to the Church was this witness in the world that God alone satisfies and the love of the Lord is enough, and they paid for it with their lives,” Ervin said.

Ervin believes the archdiocese’s emphasis on bold, radical evangelization — particularly through the “Unleash the Gospel” movement — is part of why more women are showing interest in life as a consecrated virgins.

“When you give permission to the Holy Spirit to move and bring new life, this is new life for the Church,” Ervin said. “It is a new witness of consecrated life, but it is also an offering to the Church. With this vocation, because we are not in a community of religious, our community is the church of Detroit.”

Ismail was 59 years old when she made her vows as a consecrated virgin Saturday, but it’s a vocation that’s been on her heart since her early 20s.

As a part of the Chaldean rite, she made a private promise before her bishop to live as a virgin dedicated to Christ before ultimately joining a religious order, the Sisters Minor of Mary Immaculate in Rome, where she lived her life in consecration for 30 years. Her community was eventually dissolved, however, and Ismail returned to the United States to care for her aging parents.

After her parents’ passing, the desire to continue living her life in consecration grew, and she discovered the local community of consecrated virgins.

“I am seeking the Lord, so I want to do His will,” Ismail said. “We don’t have a magic wand to know what His will is, so I have to discipline myself and learn how to listen to His word and serve the Church wherever He calls me. And wherever He wants me, He will show me in prayer.”

Ross, who was consecrated alongside Ismail, belonged to the same religious community and began to discern life as a consecrated virgin after it disbanded. Ross grew up Lutheran, but became Catholic at age 16 after being drawn to Our Lady and growing in love for the Eucharist.

“To thank God for all that he has given to me, I asked Our Lady what I could give back to Him, and I felt that call to become a sister,” Ross said.

Stegman said it’s common for women to find the vocation of consecrated virginity after having already lived much of their lives in this way. Many women feel called to a life of virginity dedicated to Christ, but living in community away from the world doesn’t sit right with them.

“Some of the young women I have talked to say it is attractive because of the fact that they can witness to perfect chastity and move about in society and have normal, everyday conversations with people,” Ervin said. “They testify (to others) that they are a bride of Christ and that they are only ever going to belong to Jesus Christ. And that shocks people, and it stays with them.”

Ervin said it’s a sign of the Holy Spirit moving through a culture hurting from sin that more women are stirred to seek something so radically different.

“God is always working for the good,” Ervin said. “It doesn’t surprise me that younger people would see (consecrated virginity) and be attracted to it because the Holy Spirit is going to put that idea of perfect chastity in their hearts.”

“Perfect chastity is so profoundly mocked and misunderstood (in today’s culture) that I think the Holy Spirit is bringing this vocation back to the forefront to make it as another image of what happens in heaven,” Ervin added. “As consecrated virgins, we image in this life what we will all be doing in heaven when we are in that spousal union with the Trinity, in communion with God.”