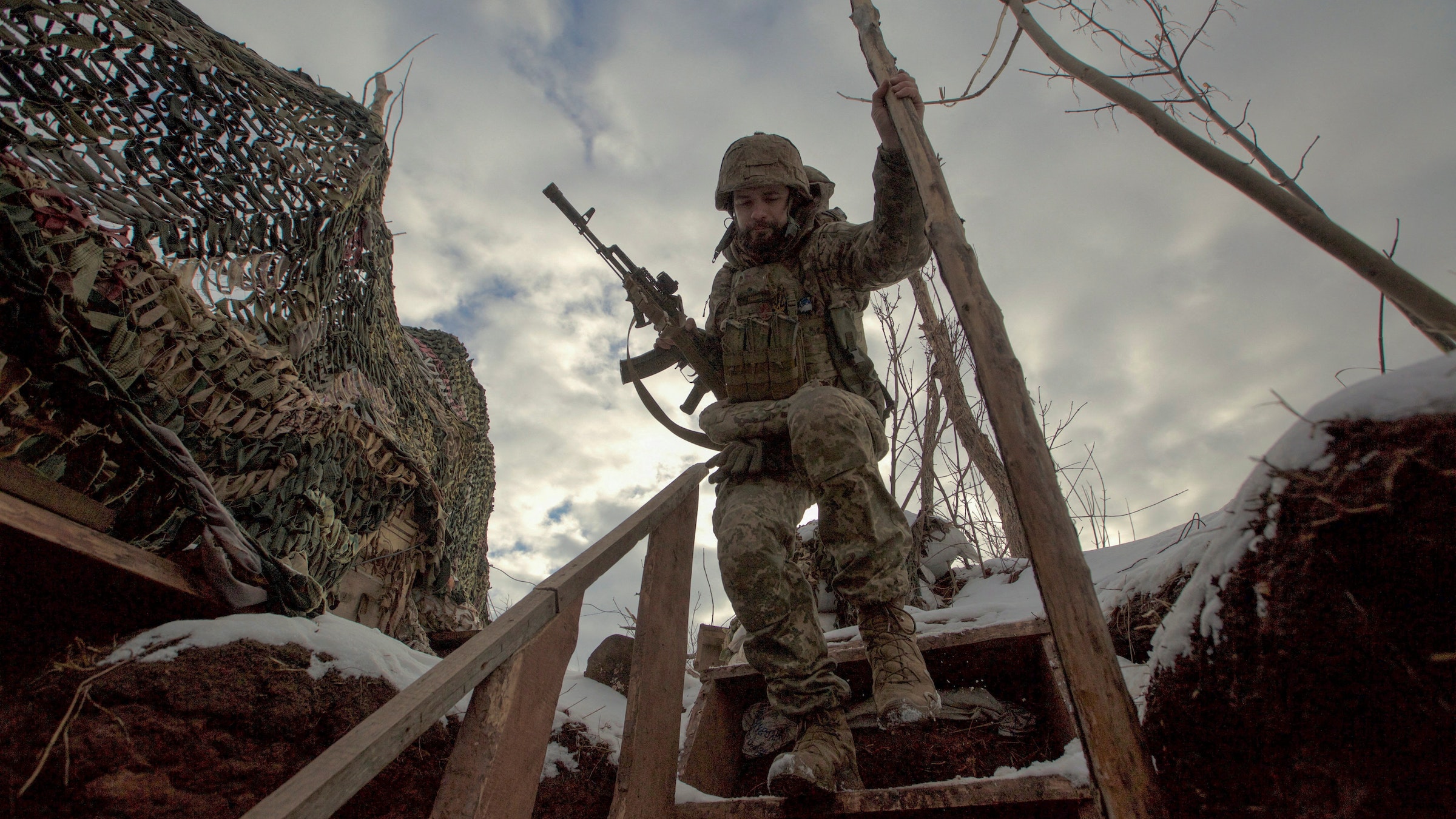 A service member with the Ukrainian armed forces walks past combat positions near a line of separation from Russian-backed rebels near Horlivka in the Donetsk region of Ukraine Jan. 22, 2022. (CNS photo/Anna Kudriavtseva, Reuters)

WASHINGTON (CNS) ─ As the United States and its NATO allies consider how best to respond to Russia's massive buildup of military forces and equipment along its border with Ukraine, the chairman of the U.S. bishops' international policy committee urged all parties to seek peace.

"With the alarming situation in Ukraine, we appeal to all leaders to respect the territorial integrity and political independence of Ukraine and to engage in constructive dialogue to peacefully resolve this conflict that impacts the lives and livelihoods of 43 million Ukrainians," said Bishop David J. Malloy of Rockford, Illinois.

The chairman of the U.S. Conference of Catholic Bishops' Committee on International Justice and Peace made the comments in a Jan. 25 statement.

He noted that Pope Francis proclaimed Jan. 26 as a day of prayer for peace in Ukraine "given the growing concerns over the situation in that country and in Europe in general."

Saying he was worried about Ukraine and how a possible Russian-Ukrainian conflict could spread, the pope announced the day of prayer after reciting the Angelus prayer Jan. 23.

"I am following with concern the rising tensions that threaten to strike a new blow at peace in Ukraine and put into question the security of the European continent, with even wider repercussions," Pope Francis said.

In his statement, Bishop Malloy urged Catholics and all people of goodwill to "join with the Holy Father, who, in his 2022 address to the diplomatic corps, said, 'Reciprocal trust and readiness to engage in calm discussion should inspire all parties at stake, so that acceptable and lasting solutions can be found in Ukraine.'"

Bishop Malloy said Ukraine's and Poland's Catholic bishops issued an appeal Jan. 24 for government leaders to "refrain from war and 'withdraw ultimatums immediately.' They called on 'the international community to join efforts in solidarity and actively support those under threat in all possible ways.'"

"In this time of fear and uncertainty, we stand in solidarity with the church in Ukraine and offer our support," the Illinois bishop added. "We call on all the faithful and people of goodwill to pray for the people of Ukraine, especially on Jan. 26, that they may know the blessings of peace."

"People are overwhelmed with a great fear, and this is normal in the face of such danger" as Russia continues to deploy troops all along the Ukraine border and as the United States and other NATO countries place troops on notice for possible deployment, he said.

At the same time, the archbishop said, "as Christians, we possess hope of the victory of good over evil. We especially pray for those who want to harm our people, that the Lord will avert their evil intentions and guide them to the path of peace."

The archbishop, his faithful and all Ukrainians, he said, are grateful to Pope Francis for declaring a day of prayer for peace in Ukraine and for the pontiff's constant prayers for an end to the fighting that began in 2014 between Russian-backed separatists and Ukrainian forces in Eastern Ukraine.