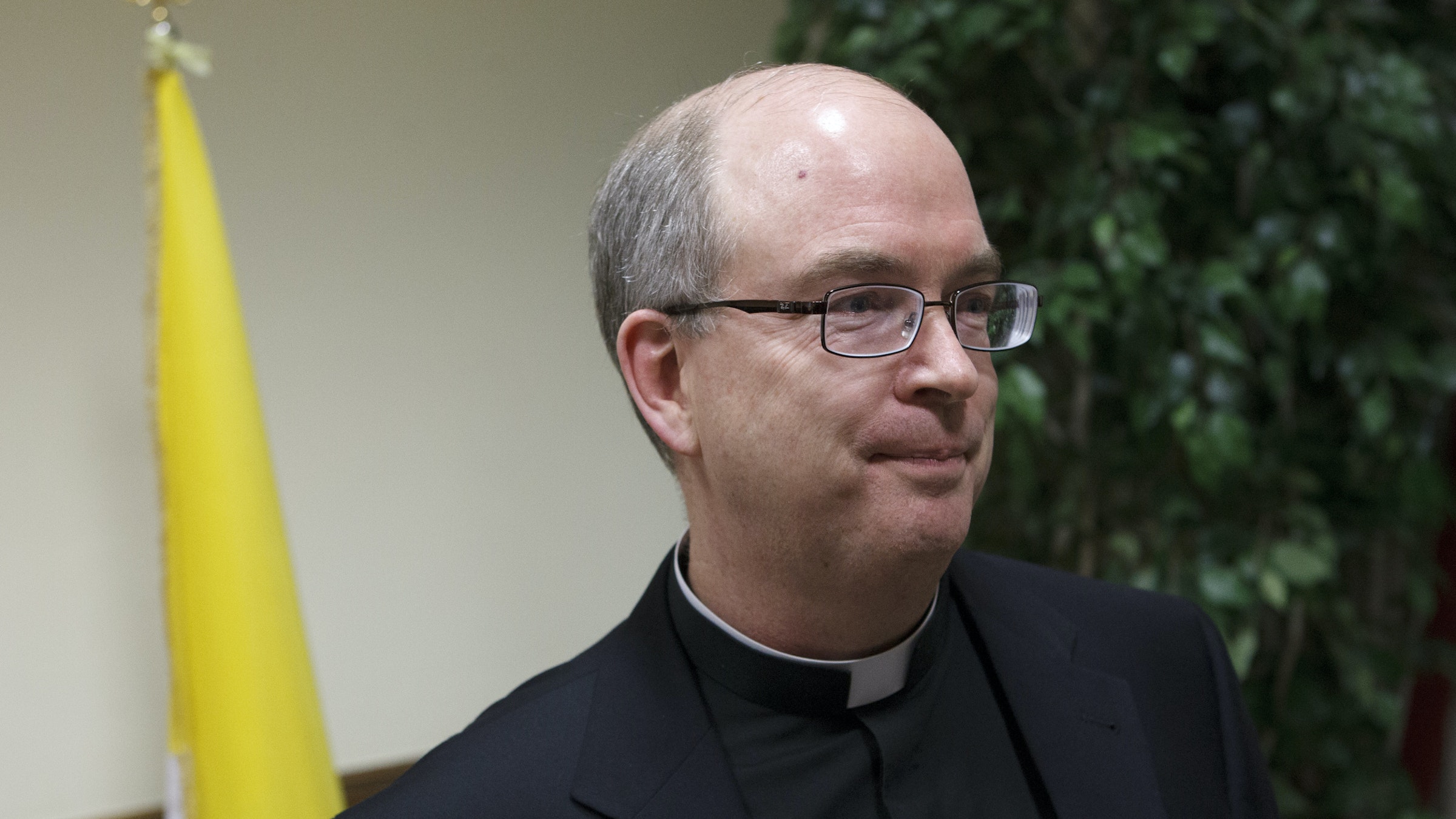 U.S. Msgr. Robert Oliver, secretary of the Pontifical Commission for the Protection of Minors, has been named by Pope Francis as the contact person for people with information or concerns about potential cases of abuse and cover-up within the Vicariate of Vatican City State. Msgr. Oliver is pictured in a Feb. 5, 2013, photo (CNS photo/Paul Haring)

VATICAN CITY (CNS) -- Vatican City State will have its own reporting system in place before the end of the year for flagging suspected cases of the abuse of minors and vulnerable people and instances of cover-up or negligence in handling such cases, the Vatican said.

In the meantime, U.S. Msgr. Robert Oliver was appointed to be the contact person for people with information or concerns about potential cases of abuse and cover-up within the Vicariate of Vatican City State, the Vatican newspaper, L'Osservatore Romano, reported July 30.

Msgr. Oliver, a canon lawyer who worked as the promoter of justice at the Congregation for the Doctrine of the Faith and in a number of dioceses in the United States, is the secretary of the Pontifical Commission for the Protection of Minors.

He was appointed in June, the newspaper said, to be the contact person for anyone who "may have information or suspicions that a minor or a vulnerable person may be at risk of abuse or may have been subjected to it as part of pastoral activities of the vicariate as well as knowledge of any act of negligence by authorities," it said.

"Within the year, the Vicariate of Vatican City will establish a public, permanent and easily accessible system for presenting reports concerning crimes and negligence dealing with the abuse of minors and vulnerable people," it said.

"The system will be gradually incorporated with the measures adopted by other relevant bodies, in particular those spelled out" in the safeguarding guidelines for the Vicariate of Vatican City, it added.

The guidelines were issued the same day the pope mandated new norms and legal, criminal and safeguarding procedures for Vatican City State and the Roman Curia with an apostolic letter given "motu proprio" (on his own initiative). The law and procedures went into effect June 1.

The law covers all forms of physical and emotional abuse -- not just sexual violence through coercion -- as well as serious forms of mistreatment, neglect, abandonment and exploitation against minors, who are younger than 18, and vulnerable adults.

It covers acts, behaviors or conditions: that occur on Vatican City State territory, including the Pontifical Villa of Castel Gandolfo; that harm any minor who is a citizen or resident; or that are allegedly perpetrated by any "public official," which includes all employees of Vatican City State and the Holy See, members of the Roman Curia and related institutions as well as Vatican diplomats and personnel.

Any individual, even someone completely unconnected with the Vatican or Holy See, can also make a report if they are aware of behavior harmful to a minor.

The crimes against minors are automatically prosecutable and the Vatican's prosecutor's office can proceed automatically; the statute of limitations on the crimes is 20 years after the alleged victim turns 18.