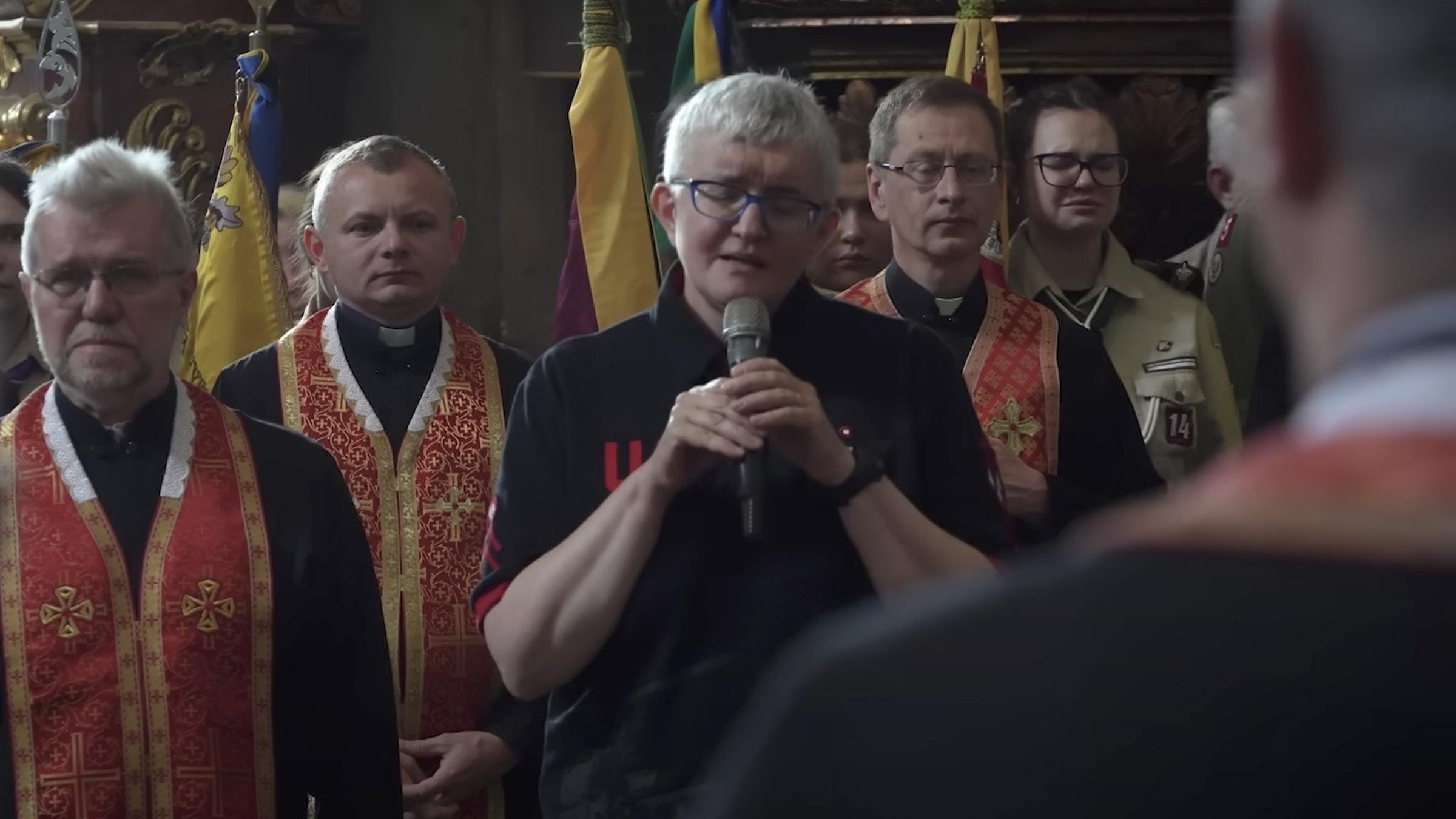 Ivanka Krypyakevych-Dymyd sings the last lullaby for her son, Artemiy Dymyd, 27, during his funeral in Lviv, Ukraine, June 21, 2022, in this video posted to YouTube by the Ukrainian Catholic University. Artemiy Dymyd died defending his country in mortar fire near Donetsk, Ukraine, June 18. At far left is Father Mykhailo Dymyd, the first rector of the Lviv Theological Academy and father of the deceased. (CNS photo/Ukrainian Catholic University)

LVIV, Ukraine (CNS) -- Ukrainian Catholic University is creating a scholarship fund in honor of an alumnus, Artemiy Dymyd, who died in mortar fire near Donetsk June 18.

The scholarship will be provided to members of the Plast National Scout Organization of Ukraine who enter university's bachelor's or master's programs. The Religious Information Service of Ukraine reported the fund was established in cooperation with Plast, of which Dymyd was a member, and the Ukrainian clothing brand Aviatsiya Halychyny, where he worked.

Dymyd, 27, was in the United States Feb. 24, 2022, but left for Ukraine immediately after the start of the full-scale Russian invasion. He bought a bulletproof vest and helmet in the U.S. and wore his armor on a plane to avoid checking luggage. He told the surprised flight attendant that he was from Ukraine and that he was feeling safer this way. Once home, he collected the rest of his equipment and immediately went to the front.

Artemiy Dymyd is the son of Father Mykhailo Dymyd, the first rector of the Lviv Theological Academy -- now the university -- and a professor there, and Ivanka Krypyakevych-Dymyd, a famous icon painter, who sang a final lullaby at his June 21 funeral. He was the great-grandson of historian Ivan Krypiakevych and of Father Artemiy Tsehelsky, who spent seven years in exile in Siberia.

Natalia Klymovska, vice rector of the university, said officials hope to raise $75,000 for a permanent endowment to generate a scholarship to cover a student's tuition costs.

On a web page for Plast Lviv, it said Dymyd joined the Scouts at age 7. "There was no sport in which 'Kurka' did not try his hand. He and adrenaline were inseparable words. His life was a continuous adventure. He was fond of military scouting, parachuting, and traveling," Plast members wrote.

Dymyd graduated from Ukrainian Catholic University with a degree in history. He was present for Ukraine's Euromaidan protests. Shortly thereafter, in the spring of 2014, when Russia occupied the Crimean Peninsula, he went to the peninsula to strengthen the pro-Ukrainian forces under the guise of buying a motorcycle. He volunteered for the Azov Regiment, a volunteer militia to defend Ukraine's Donbas region -- it later was incorporated into the National Guard.

Archbishop Sviatoslav Shevchuk, major archbishop of the Ukrainian Catholic Church and grand chancellor of the university, said Dymyd's death "shocked all intellectual circles of Ukraine, and today we say: Heroes do not die! Please, Lord, take Artemiy into your arms and grant him eternal memory!"