‘Us vs. them’ mentality threatens civility in news, social media, archbishop writes 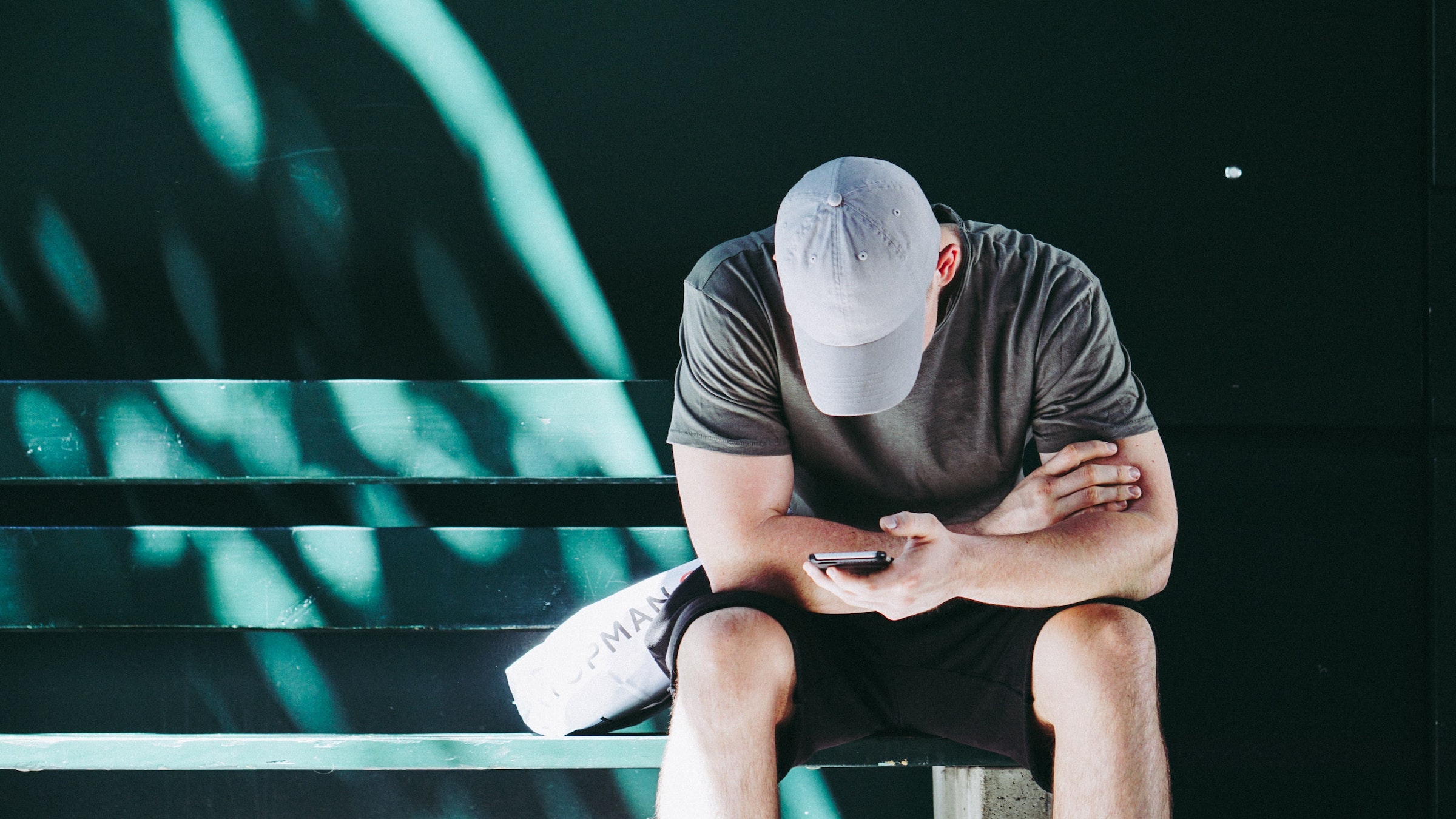 A man checks his smartphone while sitting on a bench. The impersonal nature of modern social communication, including digital media and news, lends to the temptation of division, Archbishop Allen H. Vigneron writes in a new pastoral note. Catholics have a responsibility to discern truth and respond in charity and love, he said. (Courtney Clayton | Unsplash)

Catholics must rise above temptation to demonize, attack one another online, Archbishop Vigneron says in pastoral on social communication

DETROIT — Rather than mere disagreement, an epidemic of hatred in the digital sphere is poisoning social communications and damaging the unity Christ calls for his body, Archbishop Allen H. Vigneron said in a new pastoral note June 11.

The archbishop’s pastoral note, “The Beauty of Truth: A Pastoral Note on Communicating Truth and Love in the Digital Age,” is the eighth in a series of teaching documents since the release of his pastoral letter, Unleash the Gospel, in 2017.

Modern means of communication — including social media, online news and digital media — have many benefits, but can threaten to depersonalize interactions and cause people, even Catholics, to turn against one another in frustration and antagonization, rather than seeking to communicate truth in love, the archbishop said.

“Words we see or hear have some consequence — psychological, emotional, or spiritual. That is the way God has made us,” Archbishop Vigneron said. “It is a great sorrow that at a time when the quantity of words being expressed is at an all-time high, the consequences of ill-used words harm the cause of truth and the good of the human soul.”

As the role of news and social media grows ever larger in society, “it is not uncommon for people to become frustrated, confused, and discouraged,” he noted. “Sometimes, we even struggle with anger, bewilderment, and despair.”

Rather than simply disagreeing with one another online and seeking common ground in the truth, it’s easy to be tempted toward hatred, he said.

“What could be a constructive conversation or charitable debate often devolves into declarations of ‘us’ versus ‘them,’” Archbishop Vigneron said. “Bitter antagonism has taken root, even among Catholics, despite the truth that we are sacramentally united as members of the Body of Christ and are called to abide in God’s own charity.”

Words matter, the archbishop said, because the truths they communicate matter. And nowhere does God reveal this more clearly than with His own Son.

“God reveals himself to us in words. Especially in and through the words of Sacred Scripture, God reveals himself to us and helps us to know his love and to love him in return,” Archbishop Vigneron said. “The Church’s understanding of God’s self-revelation in Scripture comes to us in the words of our Tradition, most especially in the creeds we profess at Holy Mass and in the dogmatic teachings of our popes and ecumenical councils.”

The fact that Jesus — the second Person of the Holy Trinity — is revealed as the “Word made flesh” shows God’s purpose for the spoken and written word, he said.

“God’s Word is a spoken word,” the archbishop emphasized. “The Word became flesh precisely to make the Father’s love known to us, his children. Similarly, the truths of the Catholic Faith are ‘enfleshed’ in human words.”

Christ himself testified that his purpose on earth was to speak God’s word of truth, and showed this by refusing to compromise the truth about himself, even when it was difficult for others to hear.

“Jesus himself said during his trial before Pontius Pilate that to speak words of truth was essential to the purpose of his life and ministry,” Archbishop Vigneron said. “‘For this I was born and for this I came into the world, to testify to the truth. Everyone who belongs to the truth listens to my voice’ (John 18:37). Christ, who is the truth, came among us on a mission of testifying to the truth. Our call is to belong to him and listen to his voice.”

Listening for Christ’s voice has become increasingly difficult amidst a “cacophony of other voices clamoring for our attention at all times,” the archbishop wrote, especially in a world “awash in deceptions of all kinds.”

As secular media — and even some media outlets claiming to be Catholic — promote falsehoods, sin and division, it’s critically important for Catholics to discern truth in what they read, hear and consume, he said.

“Never have the words of St. Paul been more urgent: ‘Test everything; retain what is good. Refrain from every kind of evil’ (1 Thessalonians 15:21-22),” he wrote. “Especially in our use of digital media, we who are disciples of Jesus must approach what we see, hear, and read with discerning minds and hearts.”

Catholics can discern such messages by watching for several “warning signs,” the archbishop said.

The first and most important warning sign, he noted, is “any proposition out of harmony with the teachings of Christ and his Church,” no matter who asserts it.

“A simple way to test the claims of those who present questionable teachings is to consult the Catechism of the Catholic Church, which Pope St. John Paul II described as a ‘sure norm’ for teaching the Catholic Faith,” Archbishop Vigneron said. “The truths of the Faith are not subject to revision. These truths draw us into closer union with God, whereas falsehood leads us away from him.”

“A simple way to test the claims of those who present questionable teachings is to consult the Catechism of the Catholic Church, which Pope St. John Paul II described as a ‘sure norm’ for teaching the Catholic Faith,” Archbishop Vigneron said. “The truths of the Faith are not subject to revision. These truths draw us into closer union with God, whereas falsehood leads us away from him.”

This often involves political or ideological messages, he said, in which the speaker seeks to gain an audience or demonize one’s opponents without regard to the truth.

“In some corners of the media and among individual discussions, we have seen allegations of all kinds, even extremely grave accusations, leveled against people without the benefit of supporting evidence,” the archbishop said. “Any person who makes a serious allegation has a correspondingly serious obligation to offer compelling evidence of his claim.”

A third, similar warning sign is the manipulation of facts in a way that seeks to deceive, harm or downplay truth, the archbishop said.

“Facts can be true in themselves and yet misleading when arranged and presented in a certain way. In video presentations, for example, the deft use of music and images can steer the emotional response of viewers, making them more or less sympathetic than they would have been if the facts had been presented on their own,” he wrote.

Videography and narratives are “valuable journalistic tools when used properly, but when abused they can contribute to significant deceptions and often significantly harm to the reputation of individuals and groups,” he said.

A fourth damaging characteristic of online speech is personal, “ad hominem” (Latin for “to the man”) attacks, the archbishop said.

“Catholics are no strangers to vigorous debate and fraternal correction. Unleashing the Gospel often requires that we challenge problematic ideas and call sinners to repentance and conversion,” he said. “Yet neither evangelization nor any other cause requires or excuses gratuitous personal attacks — name calling, slurs, stereotyping, guilt-by-association, unfounded assumptions or conclusions,” he said. “Charity must always animate our public communication.”

A fifth “warning sign,” the archbishop said, is a spirit that favors division over unity. While the pursuit of truth will often necessitate disagreement — especially when the truths of faith are called into question — Christ always calls his Church to unity and seeks to win over sinners, he said.

“God’s Holy Spirit unites. Satan divides. Christ’s Word of Truth will at times expose divisions that already exist within the human heart and between people (cf. Matthew 10:34-36), but the division itself is the rotten fruit of sin and the work of the Evil One,” the archbishop said.

One way to “speak the truth in love” is to remember that “tough love” always seeks the good of the other person, he said.

“It helps to remember that strength and gentleness are not antithetical,” he added. “Christ himself was both strong and gentle in proclaiming the Kingdom of God and people’s need to repent and believe in the Gospel (Mark 1:15).”

While it can be easy to forget, the internet is a public forum where Christ deserves to be present among his people, Archbishop Vigneron said.

“The internet is not just a jumble of wires and tubes. It is a network of people — real, not virtual beings — who seek hope and long for salvation and who should be able, even in the digital space, to encounter Christ and experience the beauty of truth,” he said.

Every generation has its own innovations that change the landscape for evangelization, the archbishop said, but the goal remains the same in every age.

“Just as St. Paul used the highly developed Roman road system and St. Maximilian Kolbe used the latest printing technologies to spread the Gospel in their times, so we recognize the advances in social media and information technology as God-given opportunities for spreading the Gospel in our time,” Archbishop Vigneron said.

“When people communicate with us, let them see not only good content but a tone that is respectful, charitable, joyful, peaceful, and hopeful,” he added. “Our goal is not to win arguments, but to win souls.”

The archbishop noted that the words “communion” and “communication” share the same root — both referring to “the bonds that unite us as people and as members of the Body of Christ.”

“We who are called to fidelity to the New Covenant in Christ Jesus must live as the ‘salt of the earth’ and the ‘light of the world’ (Matthew 5:13-14),” he said. “Just as the light of Christ ‘shines in the darkness, and the darkness has not overcome it’ (John 1:5), so Christ’s light shining in and through us can scatter the darkness of lies, deceptions, hatred, and division.”

Archbishop Vigneron’s eighth pastoral note, “The Beauty of Truth: A Pastoral Note on Communicating Truth and Love in the Digital Age,” can be read in its entirety here.