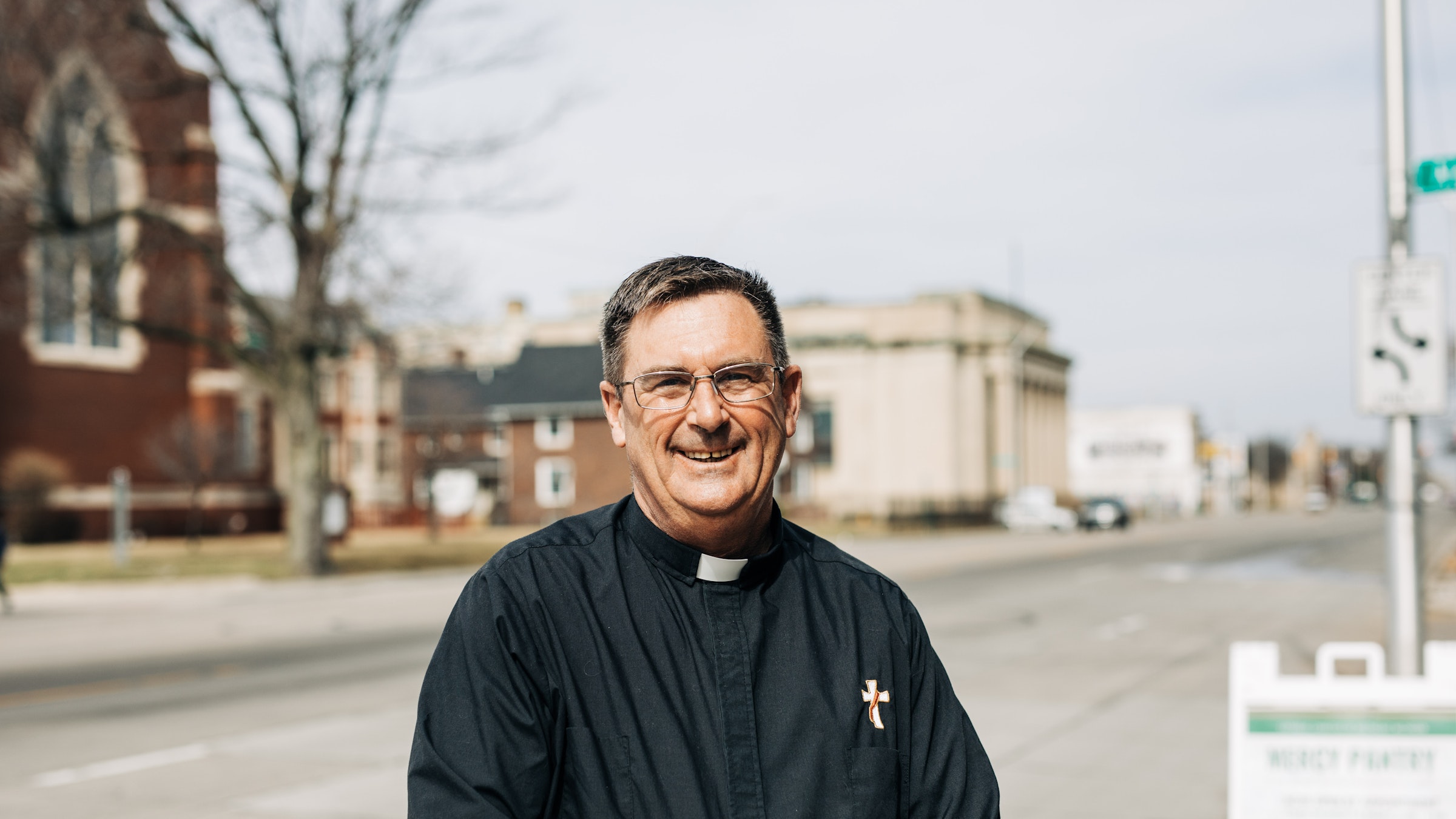 Deacon Michael Chesley, who leads jail and prison ministry efforts for Catholic Charities of Southeast Michigan, helps recent parolees find housing, jobs and counseling. Despite not being able to visit inmates because of COVID-19 concerns, there is plenty chaplains and others can do to help the incarcerated, Deacon Chelsey said. (Paul Duda | Detroit Catholic)

Amidst COIVD-19 concerns in Michigan’s jails and prisons, ministry has pivoted to helping parolees reintegrate back into society

DETROIT — Since the COVID-19 pandemic began, Michigan’s incarcerated population has shouldered a disproportional brunt of infections, a source of outbreaks and illness often unseen by the general public.

According to the New York Times, jail and prison inmates have suffered up to three times the infection rate as the general U.S. population. Recently, an outbreak of 90 cases of B.1.1.7., a British variant of COVID-19, were reported at Bellamy Creek Correctional Facility in Ionia County, and other outbreaks have occurred at the Macomb Correctional Facility in Lenox Township and the Duane Waters Health Center in Jackson.

As a result, in-person visits to prisons have been restricted, which in turn has limited evangelization opportunities for southeast Michigan’s jail and prison ministries, out of safety for both inmates and the chaplains who serve them.

Instead, those involved in jail and prison outreach, such as Deacon Mike Chesley of Catholic Charities of Southeast Michigan’s Prison and Jail Ministry, are shifting their focus toward what they can do, such as helping men and women released from state custody adjust to life on the outside.

When the pandemic began, the state began releasing minor-offense criminals in order to reduce the risk of COVID-19 exposure in Michigan’s prisons and jails and alleviate the burden on the correctional system.

“Visiting the imprisoned is a corporal work of mercy, but something Catholic Charities has not been able to do,” Deacon Chelsey told Detroit Catholic. “So I’m working to be that connection, establishing contacts with the Michigan Department of Corrections and the Wayne County Jail, along with two Catholic social workers and different interfaith organizations, to launch something to help those coming out.”

Deacon Chesley said the Catholic Church hasn’t had a steady presence in the Wayne County Jail system for decades, on account of internal issues with the jail and the wider legal system.

Deacon Chesley signed on to serve as a chaplain in the jail in December 2019, just before the pandemic hit. Since then, he’s worked with those involved, particularly retired Michigan Supreme Court Justice Mora Corrigan and Chief Judge Kenny of the Third Circuit Court in Detroit, to offer Catholic Charities’ services in any way they can.

“On Ash Wednesday, I distributed ashes for the first time, but two weeks after that, COVID hit and the jails shut down,” Deacon Chesley said. “So we switched gears, getting a lawyer to do some pro bono work for us to set up a 501(c)3 nonprofit.”

The new nonprofit, the Wayne County Outreach Ministry, works with Catholic Charities, the Wayne County Jail and the Michigan Department of Corrections to help those recently released find housing, employment and other critical services.

Developing leaders on the inside

Deacon Chesley and his team have partnered with other justice ministries, including the Detroit-based St. Vincent de Paul Justice Initiative and the Southfield-based Chance For Life organization, a nonprofit established in 1998 that’s involved in nine facilities across the state and runs classes to help men and women readjust to life after incarceration.

Thomas Adams, president of Chance for Life, said the nonprofit’s prior relationship with corrections facilities and history of developing peer leaders inside prisons and jails has made them excellent partners for Catholic Charities, particularly in a time when outside chaplains aren’t allow in correctional facilities.

“We teach individuals in core groups how to coexist with one another, not giving up their identity, whether it’s their race, ethnicity, religion or affiliation, but respecting each other’s identity and coming together as individuals,” Adams said. “Once we train leaders, they train others in the institution in conflict management, critical thinking, destressing situations and learning how to live with one another.”

Since Chance for Life’s establishment, facilities they serve have reported a 40 percent decrease in negative incidents, including a 90 percent reduction at the Cotton Correctional Facility in Jackson.

Because of COVID restrictions, Adams said his team hasn’t been able to go in person to state prisons and county jails. Instead, the responsibility for meeting and learning has fallen to Chance for Life’s incarcerated leaders, who continue to meet, when possible, in the jails and prisons and report progress to Adams’ team.

“We have prison leaders on the inside, who carry on the functions of Chance for Life,” Adams said. “In the prisons where gatherings are still happening, Chance for Life is still meeting, doing our curriculum. Even if people from the outside aren’t there for a year, the training still goes on.”

The Chance for Life curriculum emphasizes the decision-making process, so that when men and women are released, the job training and education they receive can be utilized in a positive way.

Orlando Flowers is one such core member. He became involved in Chance for Life when he was at the Macomb Correctional Facility, facing a felony murder charge, in 2006. When Flowers first met Adams, he wasn’t interested as he was about to be released on bond.

It wasn’t until the Court of Appeals reversed its decision and sent him back to prison that Flowers decided to take a chance on Chance for Life.

“Chance for Life was really involved in that prison system; a lot of guys in my housing unit were in the program, so I signed up for the classes,” Flowers said. “It really grabbed my attention, allowing me to see how my thinking pattern got me in this situation. Instead of accepting responsibility for my actions, I was pointing fingers at everyone else.”

The critical thinking and conflict-resolution skills not only prepared Flowers for a life after prison, but pushed him to help other men learn there is a better path forward.

“I knew I wanted to be part of this organization and reach people, changing people’s minds,” Flowers said. “Because of Chance for Life, violence in that prison system dropped dramatically. I was engulfed as a core member, working with people who were Level 4 security, some really hardcore dudes, who spend most of their time on lockdown, and they took the program.”

Because of COVID-19, even peer-to-peer meetings inside prison walls have been near impossible at times, Adams said, out of fear of spreading the contagious disease in such a closed space.

“We can’t go into the prisons and we can’t call into the prisons to talk to anyone, because of the costs,” Adams said. “We can use J-Pay (a jail and prison phone service that has received criticism for its costs to inmates), or communicate through email. The core leader provides communication to us, but the lack of communication from the outside to the inside has been a hinderance on everyone in this ministry.”

With chaplains unable to visit the imprisoned, the focus has turned to helping men and women being released find their footing on the outside. Deacon Chelsey is trying to make Catholic Charities a one-stop shop for parolees to successfully transition into society.

Deacon Chesley works with county and state correctional systems to direct parolees to Catholic Charities’ new Detroit-based Center for the Works of Mercy to assess their needs.

“Once we do the assessment, we look at what they need in the short term. We get thtem clothes, underwear, boots, gloves,” Deacon Chesley said. “We make sure they have a place to live, whether transition housing or a family member. We also have a medical clinic and legal counsel on site.”

Another Catholic ministry, the St. Vincent de Paul Justice Initiative, works with recently released inmates to provide spiritual, physical and emotional support, as well as mentoring services for people to transition back into society.

From its location on Gratiot Avenue in Detroit, the ministry assists men and women looking for supplies, work and help with various resources. The program is staffed by volunteers who themselves have been in jail or prison and have gone through St. Vincent de Paul to get them back on their feet.

“It’s much better to have someone who has had that experience, who’s learned how to take that darkness, that brokenness that led them to incarceration in the first place, but learn from it,” said Dorian Ballinger, president of the St. Vincent de Paul Justice Initiative. “I’ve seen guys who’ve said, ‘You ain’t been through what I’ve been through.’ I say, ‘No, but I assure you, I’ve been through some version of what you’ve been through, and so have others. Your past and present don’t define you.’”

Before COVID-19, the ministry’s work included peer-to-peer support groups where men and women could meet, pray, give their testimonies and discuss their challenges and successes with reintegrating into society.

The virus-induced economic turbulence has been a hinderance — but sometimes a benefit — to parolees looking for work. Job openings in the service industry can be found, but those jobs also tend to come with a higher COVID-19 risk.

“A lot of people weren’t getting jobs because they were afraid of the environment. In the restaurant industry, many are only open for carryout,” Ballinger said. “So it really varies. We have seen places that have been hiring, needing 500 people, because so few don’t want to or can’t work right now.

“The guys we serve, they are all over the places in terms of skills and talents,” Ballinger added. “For those in warehouses, it’s hard to find work with the cutbacks, but for those willing to work in service, there have been opportunities.”

But even with a job, a place to live, and daily necessities, the key to recovery and success after a life of incarceration is a change a heart, a change of the soul, and that is something Deacon Chesley, Adams and Ballinger all try to do in their respective ministries.

With vaccination rates increasing, all three men hope to return to in-person ministry soon, but in the meantime, they’ll do what they can to keep Christ’s command to minister to those in prison — and those recently out of it.

“I think we are starting to see a shift, but we are still maintaining our protocols — taking temperatures before you enter the building, signing a form that you don’t have any symptoms, wearing a mask,” Deacon Chesley said.

“COVID-19 hasn’t made our mission any easier, but it hasn’t made it impossible. We still need to be here. We still need to help these men and women,” he added. “We are called to go to the fringes of society, not to wait for them to come to us. So even if we can’t be in the jails and prisons yet, we can still be here in other ways.”