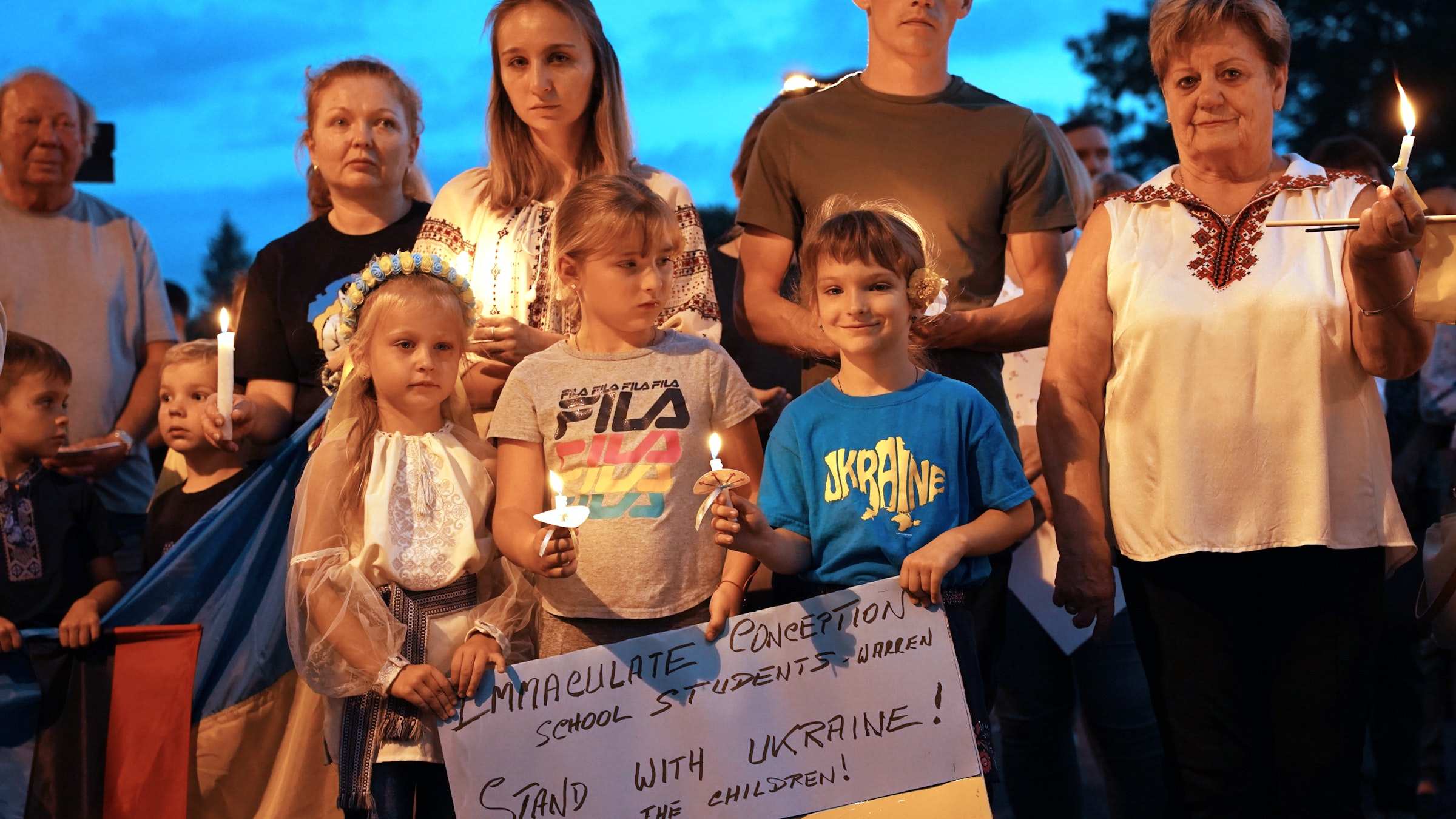 WARREN — Imagine you are 8 years old, and overnight, you have to leave your home — never to see it again, in all likelihood.

You leave behind all your toys, your cousins, your dog, your neighborhood. Even your father stays behind to fight in the impending war.

You and your siblings, along with your mother, who doesn’t seem to have a lot of answers, travel to a foreign country where you don’t speak the language, the food is different, and you are thousands of miles away from home. But then your mother takes you to a school in a quaint neighborhood. Before the school is a statue of the Blessed Virgin Mary, and behind her is a sign, "Our Lady, Protector of Ukraine," with flags and decorations in your native national colors.

For refugee students at Immaculate Conception Ukrainian Catholic School in Warren, such a sight might be the first welcoming sign they have seen in a long time. 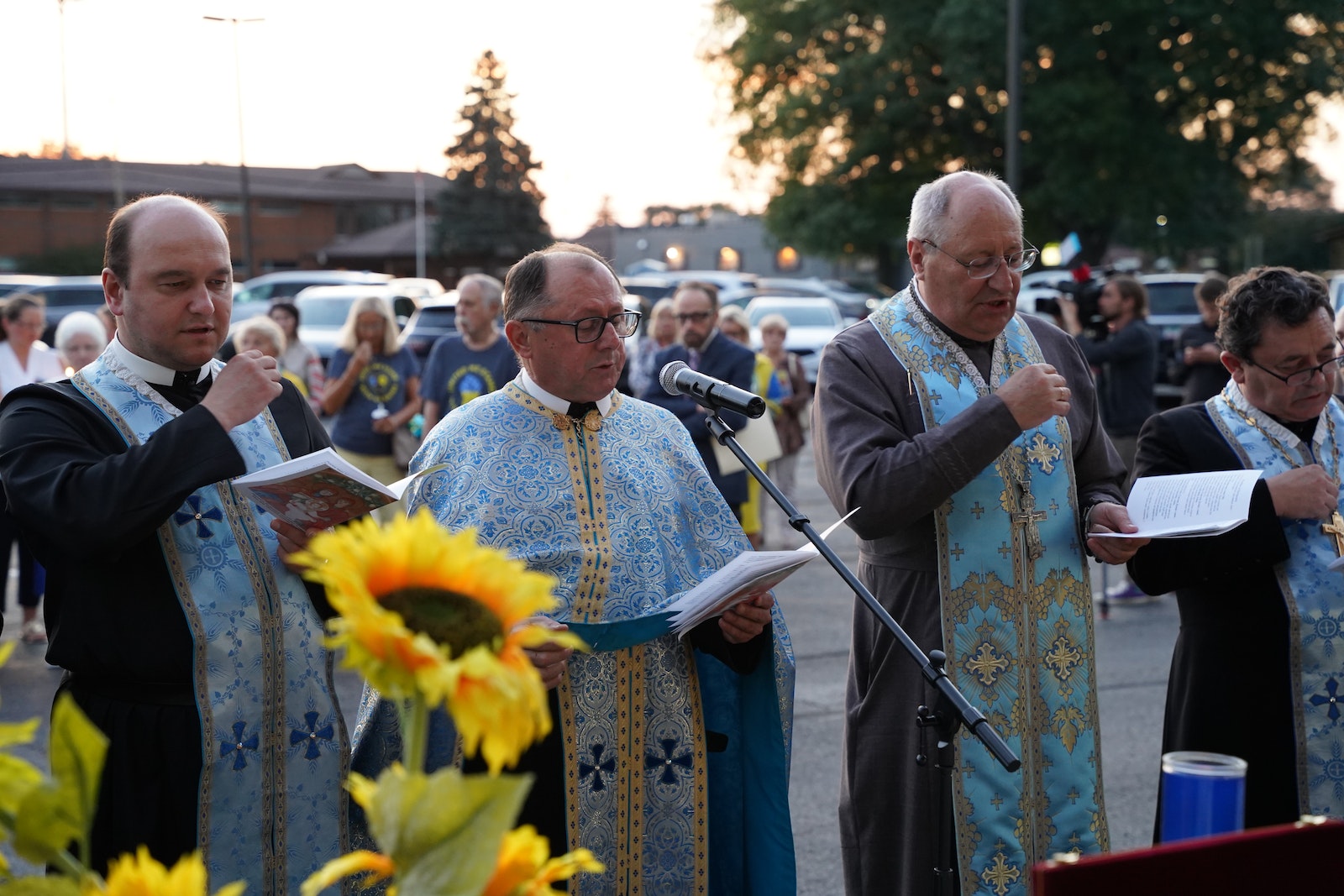 This fall, approximately 100 students from war-torn Ukraine — and increasing by the day — will join the school, which in a normal year has an enrollment of about 200 students.

Since the Russian invasion of Crimea in 2014 and invasion of the rest of Ukraine in February 2022, the school has opened its arms to refugee students and their families, who can feel at home in a school that has classes in the Ukrainian language and culture, teachers who speak Ukrainian and where Mass is celebrated in the Byzantine-Ukrainian rite.

“We are asking parishioners and people of good will to donate to the schools to help us offset the school deficit for tuition,” said Fr. Daniel Schaicoski, OSBM, superior of Immaculate Conception Ukrainian Catholic Schools, referencing the school's #StandWithUkraine Sponsor a Child Program. “We will have over 100 students, and more than that, coming as refugees this year.”

As the war in Ukraine drags into its seventh month, Fr. Schaicoski noted families are still trickling into the area and applying.

“We want to help those families who come here. We want to give the children a school and environment that is friendly to them, where they know the language. Our school is the best place for them to learn English and integrate into America,” Fr. Schaicoski said. 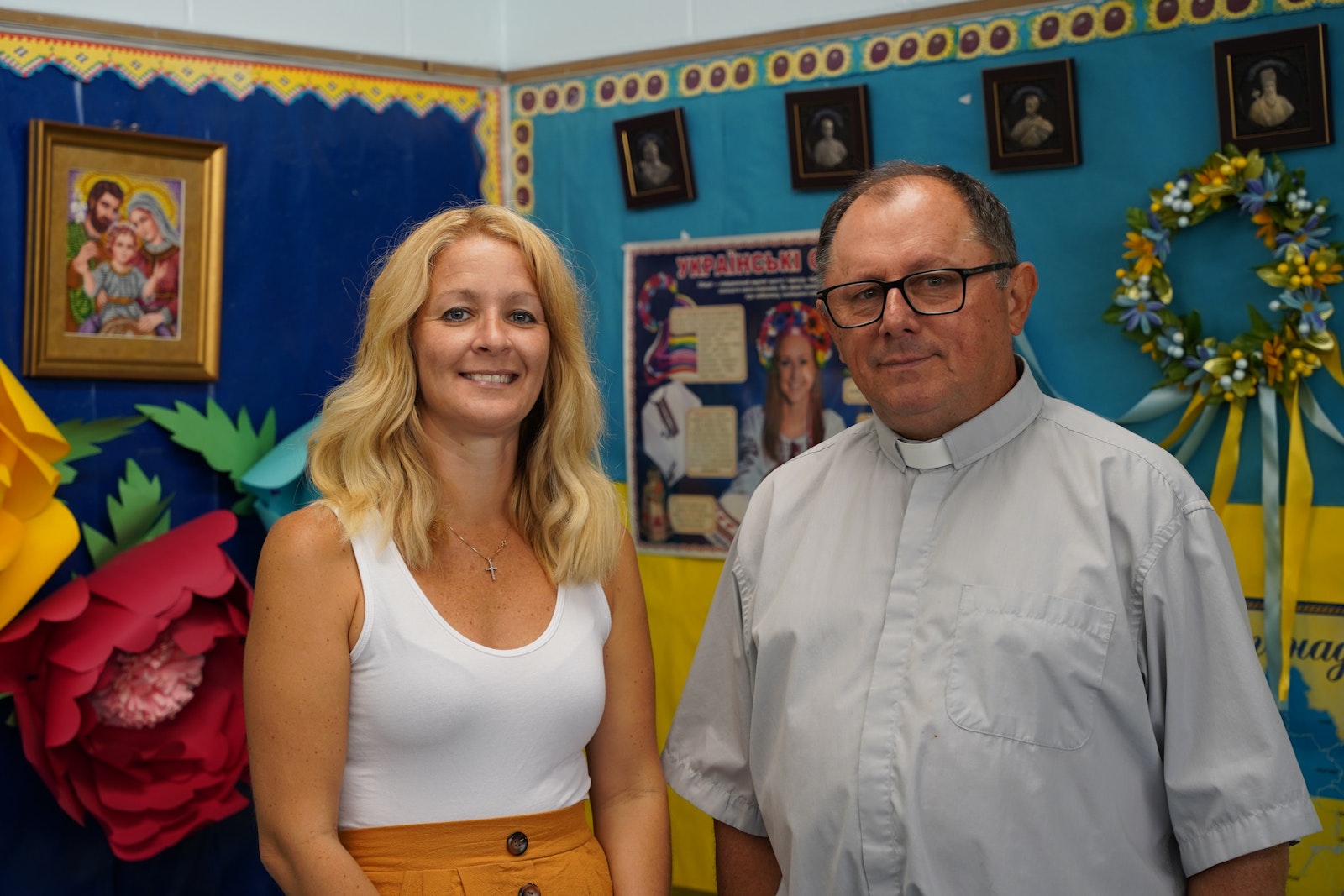 Principal Mary Ann Gruda and Fr. Daniel Schaicoski, OSBM, stand in a classroom of Immaculate Conception Ukrainian Catholic Schools in Warren. The school is set to host nearly 100 refugees from the Russia-Ukraine War this school year and is asking for donors to sponsor refugee students.

Immaculate Conception Ukrainian Catholic Schools, which features a K-8 curriculum, was established in 1936 to care for the first- and second-generation Ukrainian immigrants who came to America and populated Hamtramck, Warren and Detroit’s east side.

Along with St. Josaphat Ukrainian Catholic Church in Warren, Immaculate Conception is asking Catholics across southeast Michigan to consider sponsoring a refugee student through its Sponsor a Child Program, which helps cover the cost of tuition for a family. Fr. Schaicoski said it takes $4,000 to cover tuition to the school for one child, with Immaculate Conception Parish picking up the rest.

“This will require a huge effort from us,” Fr. Schaicoski said. “They are coming without the language; many of them have all kinds of stress. So many of these students have seen war, violence, just unspeakable tragedies. Our homeroom teachers will need help, especially from those who can translate.”

Immaculate Conception began accepting refugee students in 2014, when Russia invaded Ukraine and annexed the Crimean Peninsula. Refugees arrived in Michigan, and the Warren area in particular, both because it is affordable and has a prominent Ukrainian community, Fr. Schaicoski said. The Ukrainian American Cultural Center, which sits across from St. Josaphat Church, is a community touchstone for those coming into the country who need assistance adjusting to life in America. 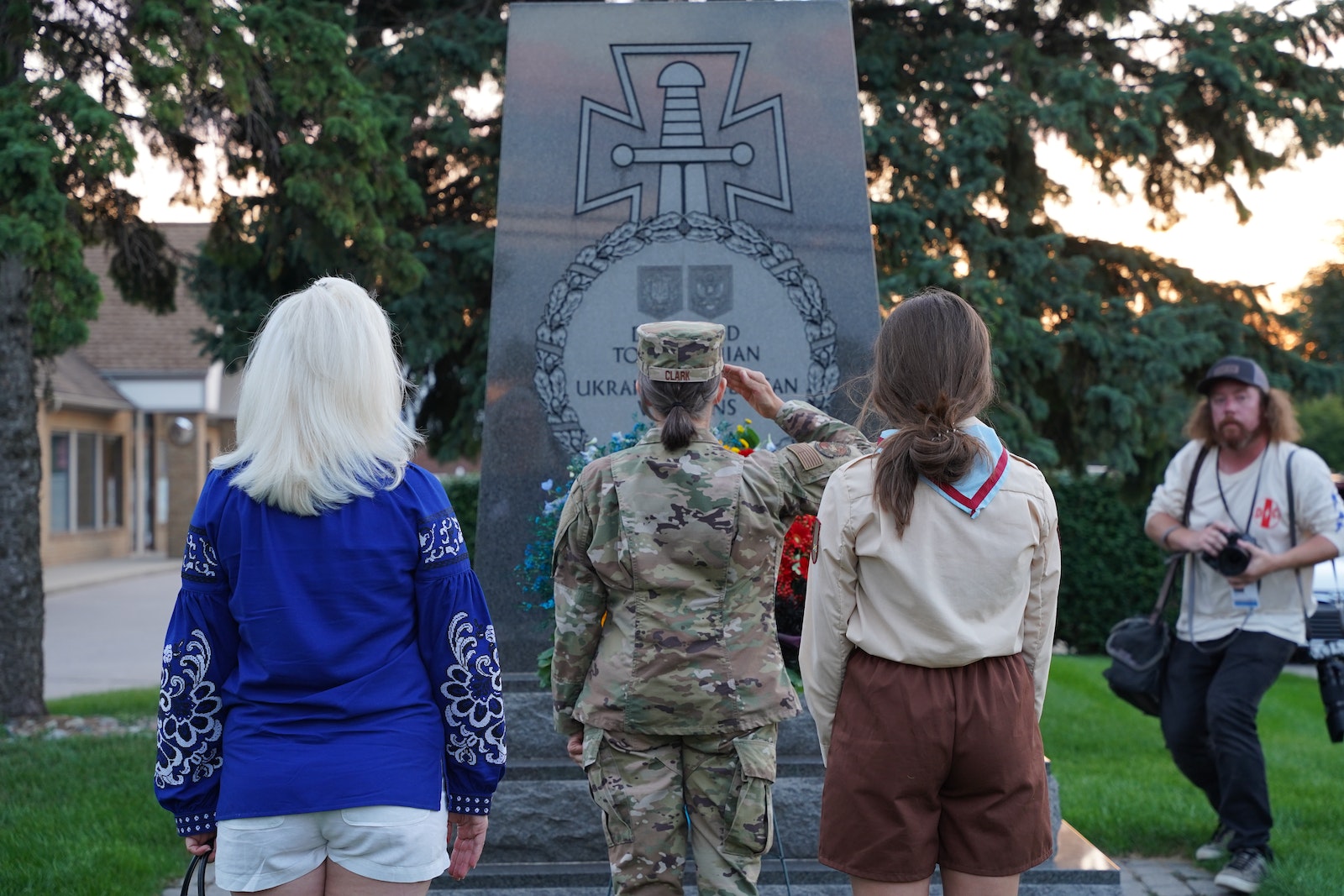 A soldier from the Michigan National Guard lays a wreath at a monument dedicated to all of the Ukrainian-American soldiers who gave their lives for their country. People prayed for all the Ukrainian forces engaged with Russian invaders in the now six-month war and all the lives lost during the conflict.

Before the war, about 70 percent of the student population comprised Americans of Ukrainian heritage. Another 20 percent was Chaldean, and about 10 percent included other families looking for a Catholic education. This year, 28 percent is estimated to be refugees fleeing Ukraine, Fr. Schaicoski said.

“Last year we had 20 or so (refugee) students, and it was amazing to see how our students were helping those who just came from Ukraine," Fr. Schaicoski said. “Those kids from Ukraine didn’t understand English, but Ukrainian students from here would translate everything, help with their homework and all of that."

Immaculate Conception has contacted social workers and psychologists to work with refugee students, but it's been a difficult task finding social workers who speak Ukrainian, Fr. Schaicoski said.

“We had one child, a third-grader, who was crying for two weeks,” Fr. Schaicoski added. “I approached her mother, who told me, ‘Father, what she saw on her travels from the east to Poland, you will not see in your lifetime, not in movies.'”

On Aug. 23, the Ukrainian-American community gathered at St. Josaphat for a prayer vigil to celebrate Ukraine’s independence and mark the six-month anniversary of Russia’s invasion of Ukraine. Aug. 24 marks Ukrainian Independence Day, when in 1991 the modern country declared independence from the collapsing Soviet Union. 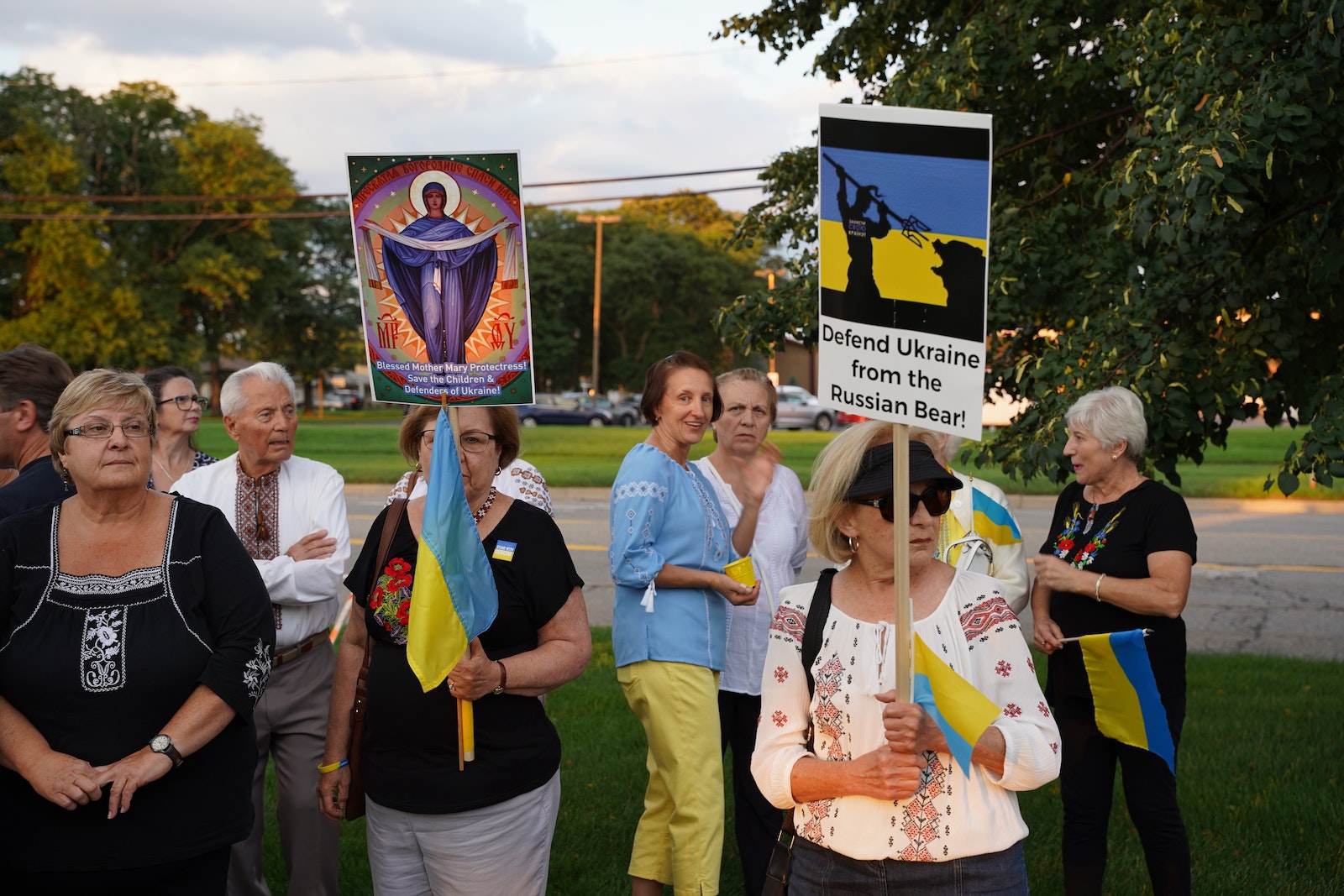 Members of the Ukrainian-American community gather at St. Josaphat Ukrainian Catholic Church in Warren for a prayer vigil in commemoration of the 31st anniversary of Ukraine's independence from the Soviet Union and the six-month anniversary of the Russian invasion of Ukraine.

Participants waved Ukrainian flags and held signs of support, and local officials spoke about the evils being done to Ukrainian civilians, particularly children being deported to Russia and forced to assimilate into Russian culture.

“Hundreds of children in Ukraine have been killed, even more have been injured, and perhaps thousands, maybe millions, have been displaced,” Warren Mayor Jim Fouts said. “I was touched by an interview I saw on television, where a young Ukrainian girl was speaking about how Russian troops came up to her family, killed her mother and father, and left her an orphan.”

Since the war started, the Ukrainian flag has been flying in front of Warren's city hall, with the mayor pledging the flag will stay up as a sign of commitment to the Ukrainian community.

Horror stories from the war, now in a seemingly endless stalemate in the country's east, were prevalent during the vigil, with participants urged to support refugees yearning for a place to learn and be loved, away from the bombs, the shells and the violence.

“Humanly speaking, as a Christian, what is most important is to provide these children with help,” Fr. Schaicoski said. “That is where this school is important. It will be easier to approach all the difficulties, the trauma they faced, in a school that feels more like home.” 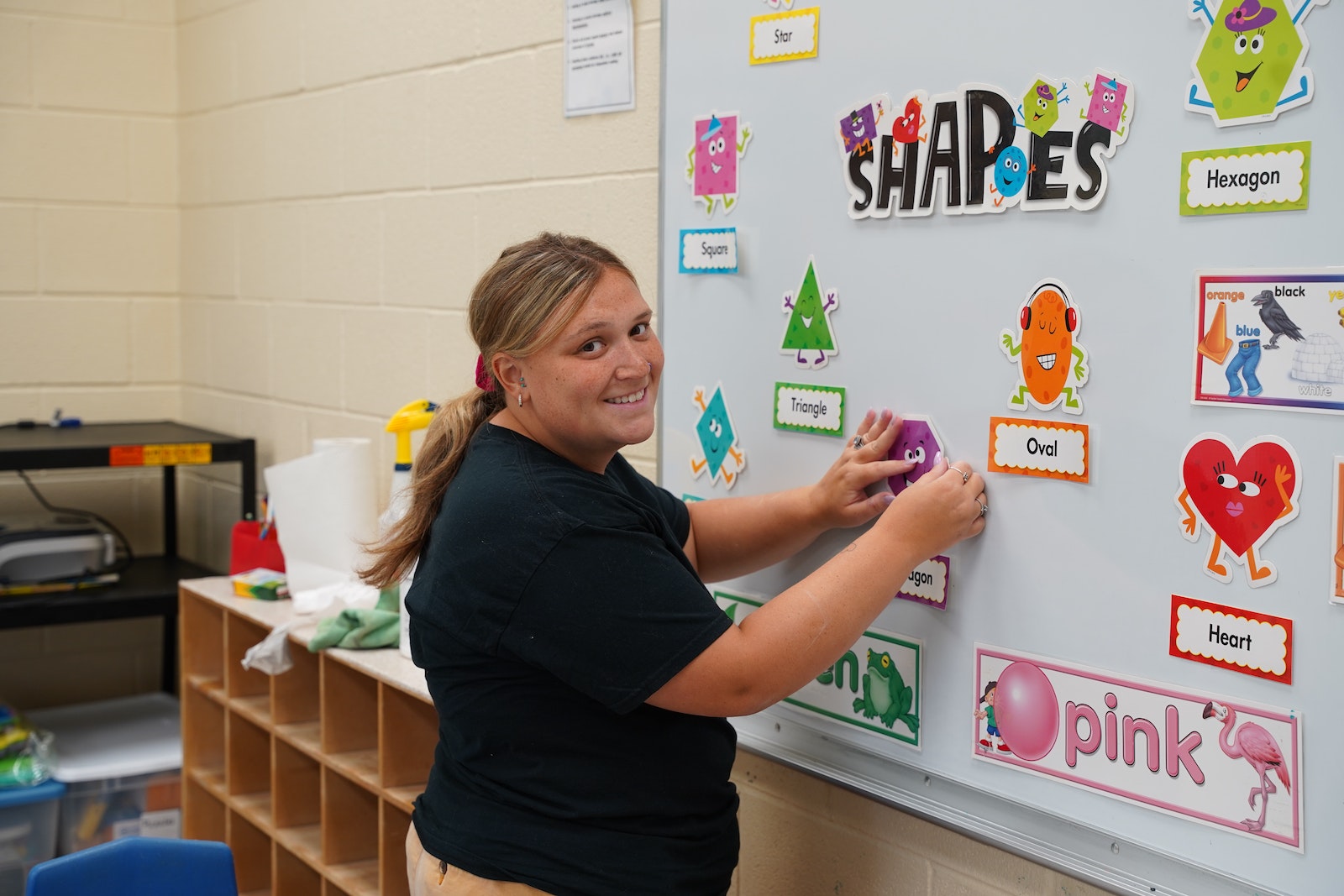 Alexandria Middleton, a pre-kindergarten classroom aide, prepares a classroom for school to begin Sept. 8. Immaculate Conception officials said nearly 100 refugees have enrolled in the school, with more coming in by the week.

Fr. Schaicoski recalled how, by the end of last school year, the third-grader who couldn't stop crying was making friends and beginning to smile.

“It’s easy to say, ‘I stand with Ukraine,’ but this is what you need to do to help,” Fr. Schaicoski said. “If you talk about helping Ukraine, this is a chance to help Ukraine that is at your doorstep. That is what Christ wants us to do. We can turn this crisis into a blessing for our Detroit community. If we do the right thing, if we follow the teachings of Christ, we can do wonders.”