'We need to change this culture': Local Catholics march for life in Wyandotte 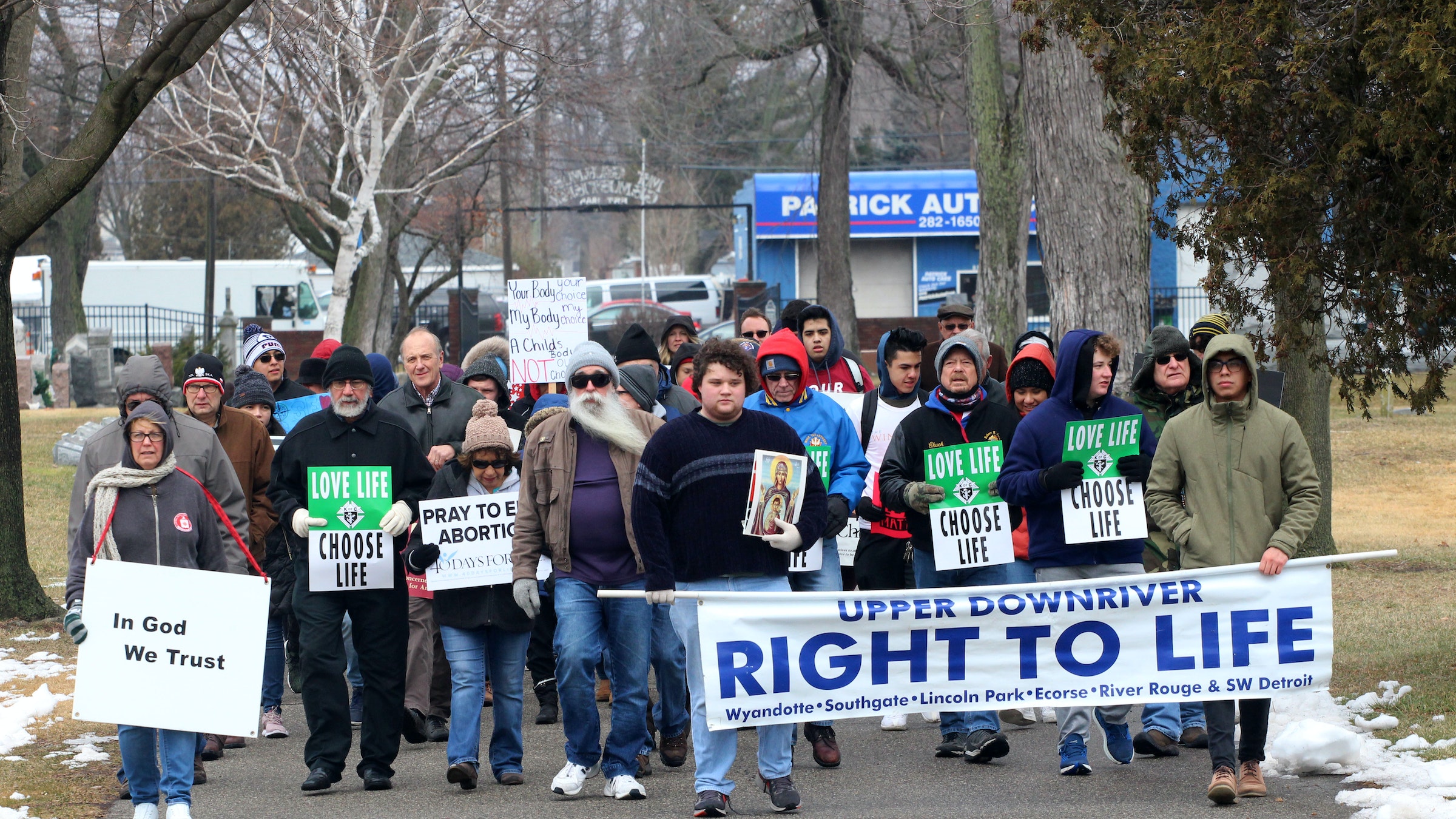 About 60 people participated in the Downriver March for Life, which started at Our Lady of the Scapular Church in Wyandotte and ended at nearby Mount Carmel Cemetery, on Jan. 26. The local march has taken place for about 20 years, coinciding with the national March for Life in Washington, D.C. (Photos by Laurie Bertke | Special to Detroit Catholic)

Downriver march, prayer service allows local Catholics to join their voices to those standing up in D.C.

WYANDOTTE — A patchy drizzle accompanied marchers bearing signs and rosaries as they set out from Our Lady of the Scapular Church, making their procession through slushy residential streets to Mount Carmel Cemetery.

About 60 pro-life supporters turned out Jan. 26 for the Downriver March for Life, an annual march and prayer service peacefully protesting the practice and legality of abortion around the anniversary of the Supreme Court's 1973 Roe v. Wade decision. Hosted by Upper Downriver Right to Life and Our Lady of the Scapular Parish, the march has taken place for about 20 years, coinciding with the national March for Life in Washington, D.C., according to Ed Kroll, president of Upper Downriver Right to Life.

Jen Nelson and her 6-year-old daughter, Adelin, were among several in the crowd who had just returned from demonstrating in the nation’s capital on Friday. Nelson said she has attended the March for Life in Washington every year for the last 18 years, since she faced a crisis pregnancy as a 19-year-old college student.

At the time, she was scared and tried to go to an abortion clinic. The office closed early that day, so she ended up at a crisis pregnancy center instead. After choosing life for her daughter, Nelson said she doesn’t want any woman to lose out on the joy a child brings.

“That’s why I march, and I go to the March for Life and I’ve been so involved in the pro-life movement, because she’s been the best thing that ever happened to me,” said Nelson, a member of St. Vincent Pallotti Parish in Wyandotte. “Every child is as precious as my own.”

JoAnn Scanland, a member of Our Lady of the Woods Parish in Woodhaven, also attended the March for Life in Washington and said it was wonderful to see all the young people and families marching in Wyandotte. A delegation from the Detroit chapter of the Windrose Project, a youth leadership organization, were among those attending the local event.

As marchers processed to the cemetery, they prayed and paused at several rosary stations before crowding into the small chapel at Mount Carmel Cemetery for a prayer service.

Deacon David Drysdale of St. Mary Parish in Rockwood, who presided at the service, noted the importance of praying not just for the unborn, but for abortionists and others who work in the clinics, as well as the women considering abortions and lawmakers.

“It’s only through prayer that abortion will end,” Deacon Drysdale said.

He called on those gathered in the chapel to be “beacons of light” in the darkness. “Defend life. Be witnesses to life,” he said. “Be the Jeremiahs, the Isaiahs, be the prophets that go out in the nations and that proclaim His truth.”

Robert Burke, president of Monroe County Right to Life, also shared his testimony as a post-abortive father. The child he and his then-fiancée aborted would be about 30 years old today.

Burke recounted how he eventually experienced a “reversion” to the Catholic faith, and became involved with Right to Life of Michigan with his wife. In November 2007, he made a retreat through Rachel’s Vineyard, a ministry of Priests for Life that offers weekends for healing after abortion. During the retreat, he and other participants had the chance to name their children during a prayer service. There he saw “the pain of abortion in the eyes of women that were there,” Burke said.

“Truly, my eyes have been opened to what I participated in, and I will never let that happen again, and more importantly, I am trying to make sure that I do what I can with God’s grace to help change this culture,” Burke said.

“Prayer is powerful, and it should motivate us to action,” he added. “We need to change this culture.”