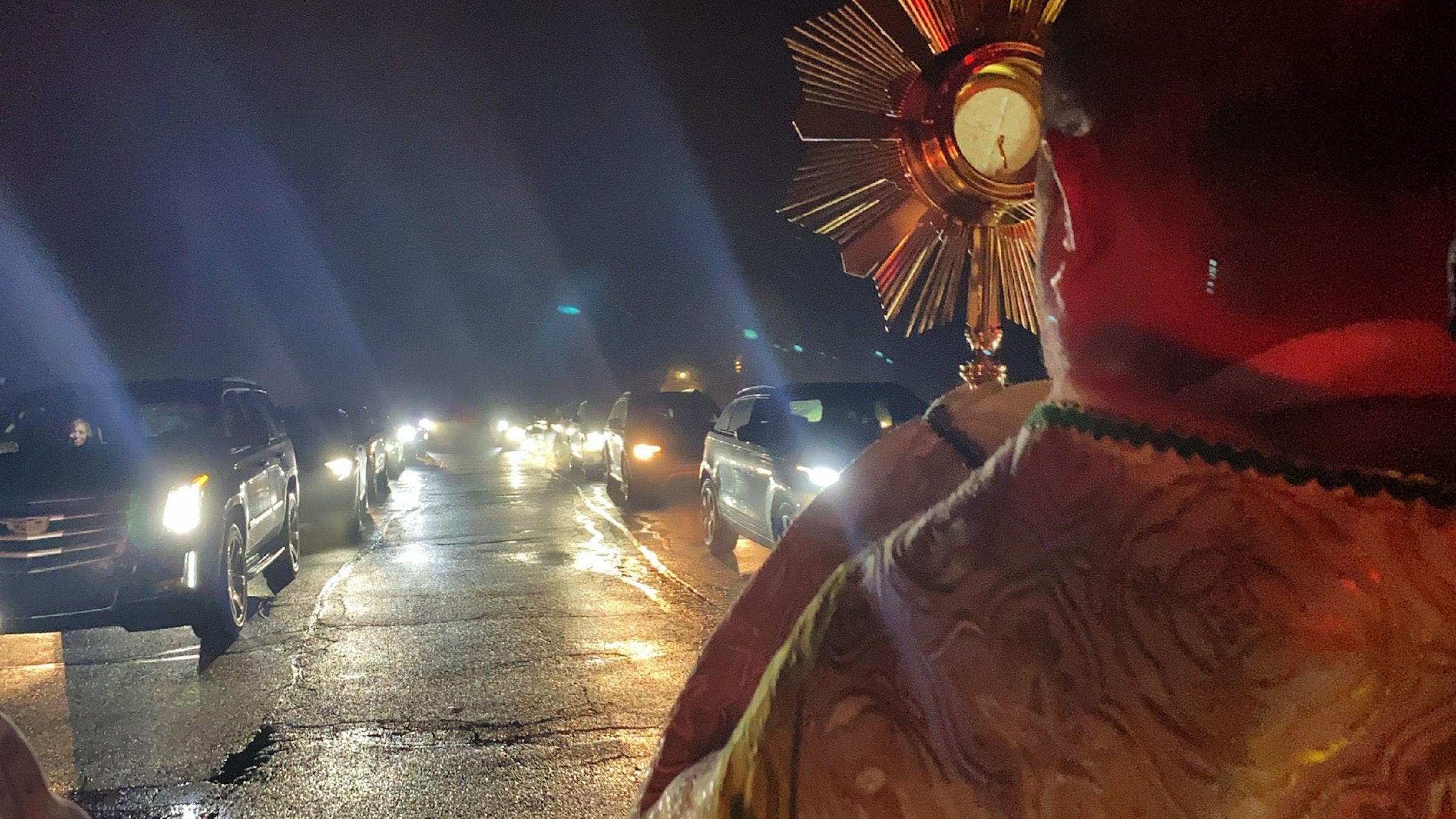 On March 19, cars filled the parking lot of the West Bloomfield church — a normal sight, except for the fact that Mass had been suspended.

Instead, people remained in their cars, gazing up at the window above the sanctuary, where the Blessed Sacrament was present, gazing back at them.

“People are used to coming face to face with the Eucharist, because we have perpetual adoration on Thursdays,” Fr. Bryan Kassa, associate pastor at St. Thomas, told Detroit Catholic. “Now with people asked to say home, we collaborated and came up with the idea that since they can’t come face to face with Jesus, we can bring the Lord to them.”

After Fr. Rodney Abasso celebrated the 6 p.m. Mass for the feast of St. Joseph, he placed the Eucharist in the monstrance, carried it to the front of the church and scaled a 25-foot ladder, placing in the monstrance in the window for everyone in the parking lot to see.

During the parking lot holy hour from 7 to 9:30, Fr. Kassa and Fr. Fadie Gorges made a sign telling those who wanted to have their confessions heard to flash their headlights.

“The people would flash their lights, put their passenger-side window down if they were by themselves, and quietly went to confession,” Fr. Kassa said. “So we had a lot of flashing lights in the parking lot, all the while people were adoring Jesus. There were about 300 cars in the parking lot, maybe 500 people in total.”

“We wanted to do it again, but with the order on Monday asking people to stay home, we decided we didn’t want people to leave their homes either,” Fr. Kassa said. “So we’re putting it on hold for now, figuring there might be another opportunity. We’re going to have to get creative and have been tossing out ideas to reach the people. The Holy Spirit will place something on our hearts.”

Fr. Kassa said St. Thomas is still open for private prayer, and the church is livestreaming its 10:30 a.m. Sunday Divine Liturgy on Facebook and YouTube.

Photos of the parking lot adoration have made its rounds on the “Catholic Twitterverse,” along with other viral moments — the good kind of viral moments — such as a priest in the Diocese of Lansing using a plane to fly a Eucharistic procession over the state from 10,000 feet in the air.

“Our pastor, Fr. Bashar Sitto, said we couldn’t gather in the church together, so we filled the parking lot together,” Fr. Kassa said. “It was hope in a time of fear and anxiety. The Lord is not absent; He is everywhere at all times, and people appreciated the opportunity to just come and be with Him.”