When tragedy struck family, the Church was there; now, they’re returning the love 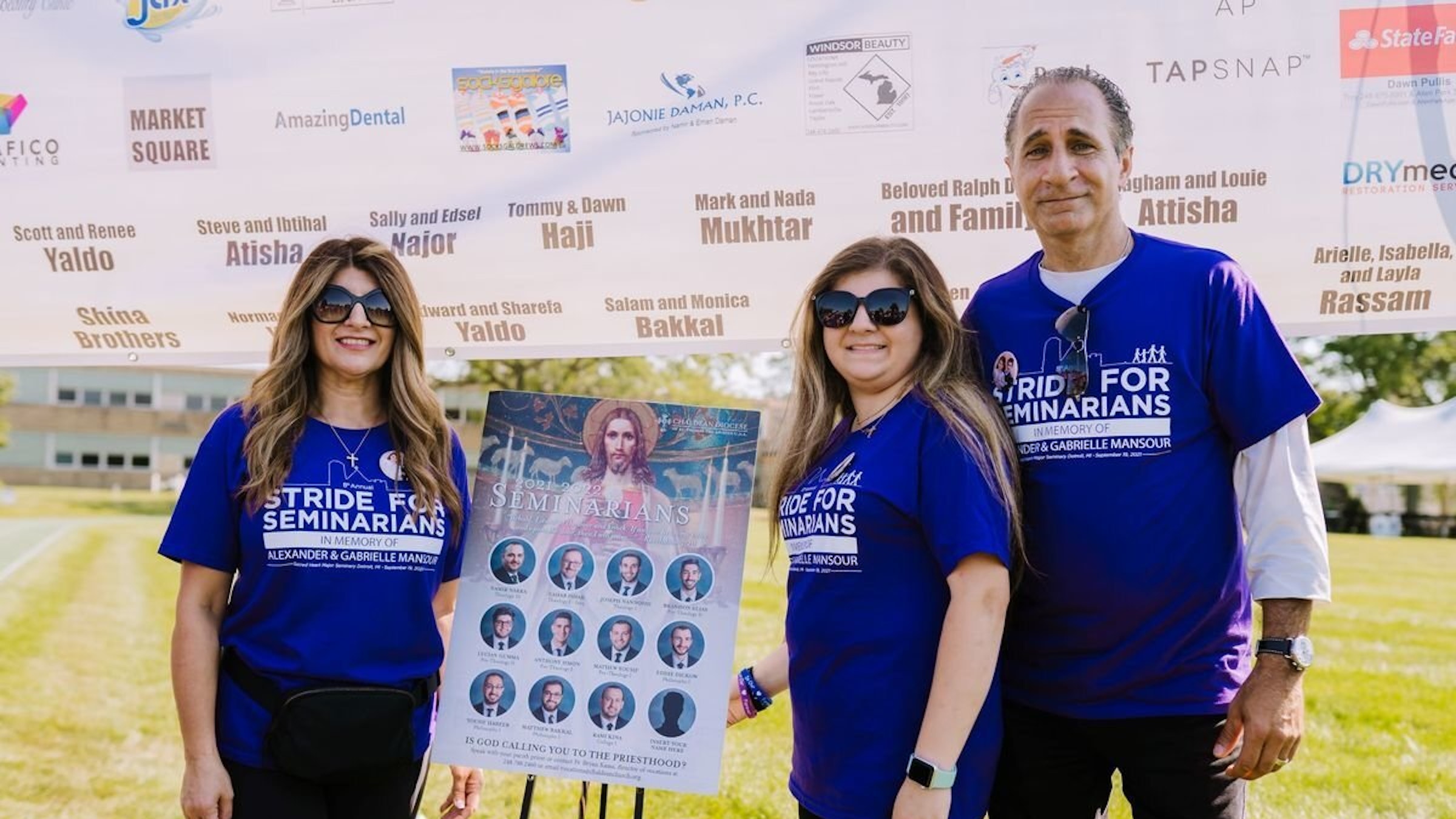 Ann, Adriana and John Mansour stand next to a poster of the 11 seminarians currently in formation for the Chaldean Eparchy of St. Thomas the Apostle. On Sunday, Sept. 19, for the eighth year in a row, the Mansours hosted “Stride for Seminarians,” an annual fundraiser walk in honor of Alex and Gabby Mansour, who died in a boating accident in 2013. (Photos by Valaurian Waller | Detroit Catholic)

Annual ‘Stride for Seminarians’ raises funds for Chaldean seminarians in honor of Alex and Gabby Mansour, who died in 2013

DETROIT — In July 2013, Ann and John Mansour lost two of their three children in a tragic boating accident on Sylvan Lake. Eleven-year-old Alexander and 6-year-old Gabrielle passed away, while 10-year-old Adriana survived with severe brain trauma after spending four months in the hospital.

The family could easily have lost their faith, Ann said, but thanks to the rallying of their Chaldean community, neighbors and friends, and the steadfast presence of the priests, seminarians and nuns from the Southfield-based Chaldean Diocese of St. Thomas the Apostle, the Mansours were able to find the strength in God to continue getting up day after day.

“In the first few weeks while we were in the hospital, Adriana was fighting for her life, and we had the whole community praying for her. Everyone knew what was going on,” Ann told Detroit Catholic. “The seminarians stepped up and wanted to come see us at the hospital to pray with us and be with us and support us.”

The first to arrive was Fr. Patrick Setto, then just a seminarian. He delivered handmade cards for Adriana made by children at a camp he was overseeing. He sat and prayed with the family. He came back the next day with another seminarian at his side. Day after day, new seminarians would show up and sit with the family and pray alongside them.

“From that time on, they were coming to the hospital almost every day, spending time with us, comforting us, praying with us, and that meant a lot,” Ann said. “We built up a relationship with them, and they became like our family. Even when we left the hospital, they were still coming to visit us at home.”

The Mansours wanted to give back to their church community, and so, in honor of Alex and Gabby, the Mansours set up a fund to help support Chaldean seminarians and offset the cost of their education.

On Sunday, Sept. 19, for the eighth year in a row, the Mansours hosted “Stride for Seminarians,” an annual fundraising walk, with 100 percent of the proceeds paying the cost of tuition at Sacred Heart Major Seminary through the Chaldean Seminarian Fund.

Currently, the Chaldean diocese has 11 seminarians studying at Sacred Heart. The cost of attendance is approximately $30,000 per seminarian per year, including board and education. John Mansour said this year’s event raised approximately $80,000.

Normally the walk is hosted at the Detroit Zoo with 1,500 in attendance, but this year, about 620 participated in a smaller walk at Sacred Heart, and 800 attended a Mass that followed at the Cathedral of the Most Blessed Sacrament celebrated by Chaldean Bishop Francis Y. Kalabat.

After losing two of her children and watching one suffer, Ann said she felt angry and hurt by God and blamed Him for their loss. Except for the support she and the family received from the Church, keeping the faith would have been difficult, she said.

“We clearly understand that on this earth we have no control over everything; it’s in God’s plan. He is in control, and whatever comes our way we should accept and deal with our suffering in a way that not only tries to keep us going but helps others as well,” he said.

“That’s what being a Catholic is all about; that is what brotherhood and sisterhood are all about: getting through these kinds of situations together,” John added. “We had a whole army of people who embraced us and made sure we were focused on the cross and on the Lord, and that helped us to keep going.”

Ann knows Gabby and Alex are with Jesus, and they often send the family signs, she said.

“They show us signs all the time; every year during the walk we have a sign from them that they are here with us,” Ann said. “This is how their memory is still alive. And this is why we do this event so that everyone will remember them every year.”