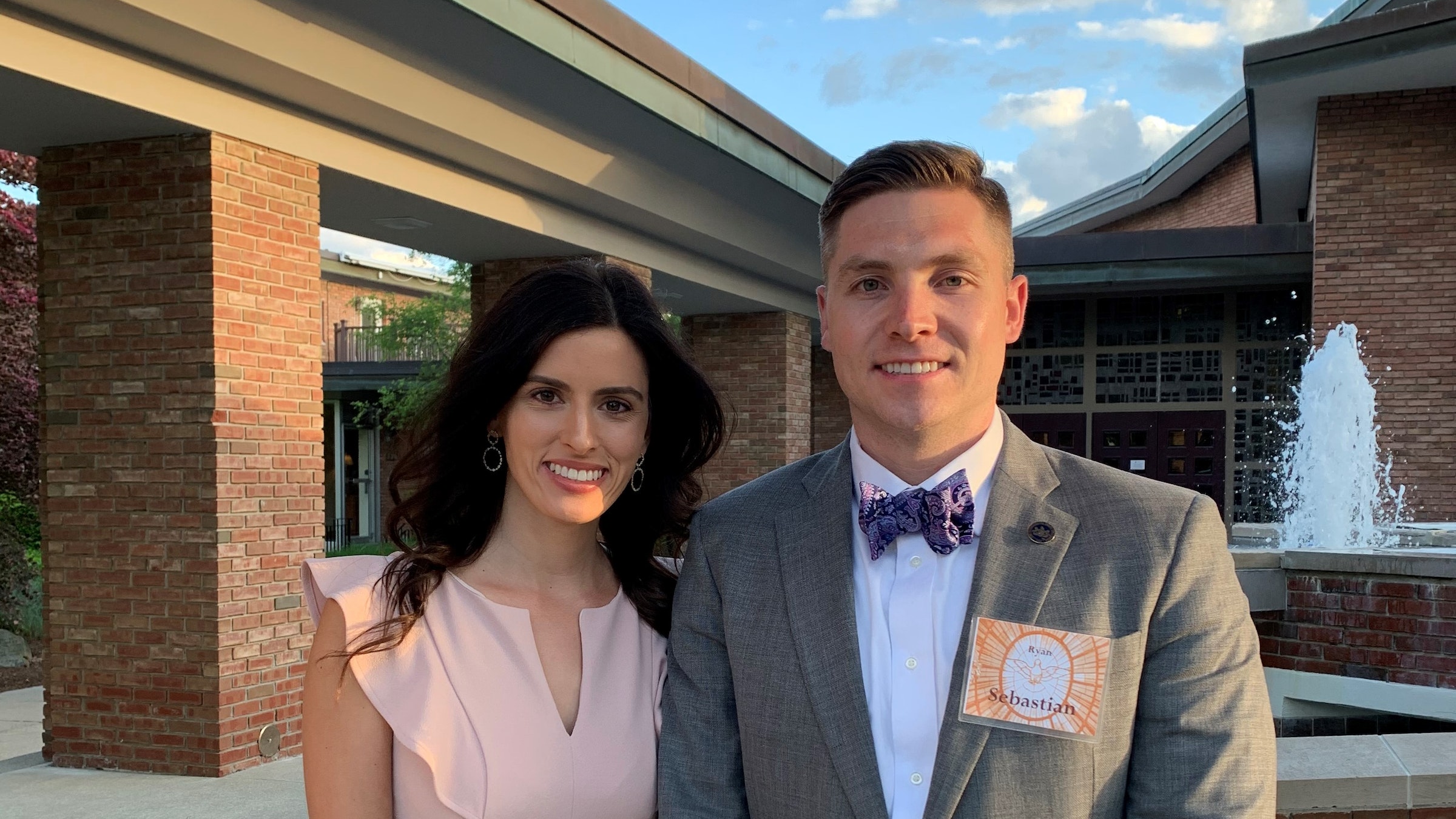 Brenna and Ryan Bartok pose for a photo in May 2020 after Ryan's initiation into the Catholic Church at Our Lady of Sorrows Parish in Farmington. For new converts like Bartok, developing a habit of regular Mass attendance is crucial, a habit that was made challenging because of COVID-19 last year. Bartok, who, like many Catholics, watched livestream Masses last year, says he’s ready to get back to in-person Mass. (Courtesy of Jennifer Barron)

For those on the fence, a year away from the Church means many have fallen out of the habit of Mass — and need to be invited back

ROYAL OAK — Before the COVID-19 pandemic caused churches to close last year, 70 to 90 men and women ages 22 to 35 attended the young adult Mass at St. Mary Parish in Royal Oak each month, followed by fellowship in the rectory courtyard or an outing to a nearby bar or restaurant.

When churches reopened last summer and the young adult Mass resumed, Sarah Pale was surprised to see about 70 people show up. Pale assumed the attendance would be much lower, even with the protocols St. Mary had implemented.

“I think it showed the pent-up desire for community and for being able to gather for Mass again,” Pale, who coordinates the Masses, told Detroit Catholic. “Everyone was surprised by the strong attendance that day.”

The habit of Mass

Whether Catholics will return to Mass and the sacraments in the same numbers post-pandemic is a question Catholic sociologists are asking, particularly now that the general dispensation from the Sunday Mass obligation was lifted in the Archdiocese of Detroit on March 13.

Michael McCallion, Ph.D., theology professor at Sacred Heart Major Seminary and the seminary’s Fr. William Cunningham Chair of Catholic Social Analysis, predicts attendance will be slow to rebound for a simple reason: Catholics have gotten out of the habit.

“When churches were closed, people got out of the social ritual practice of going to Mass on Sunday,” McCallion said. “Especially for those on the fence — perhaps about a number of other issues that have nothing to do with the pandemic — that practice might not resume.”

Those on the fence might include young people, recent converts or Catholics who previously had attended Mass only sporadically, McCallion said.

It’s especially important for new converts to build their newfound faith through good habits, he said. As adults spend months learning and preparing to become members of the Catholic Church in RCIA, they attend Mass together each Sunday, developing a common ritual practice.

“In the sociology of conversion, belief follows behavior. If we get out of the behavior, the belief fades as well,” McCallion said.

For Ryan Bartok, who came into the Church last year at Our Lady of Sorrows Parish in Farmington, it’s been a challenging year.

Because of the pandemic, his planned initiation into the Church at the Easter Vigil was postponed until May 30, 2020, the day before Pentecost Sunday. Bartok attended weekly RCIA sessions and Mass with his sponsor, who was his fiancée at the time and now is his wife. Bartok’s in-laws are active members of the parish and lifelong Catholics.

“The more I went to RCIA and the more I learned about the Church, the more I felt I was on the right path,” Bartok said. “I was surrounded by people who were already living that Catholic culture, and I was looking forward to being part of it.”

When he was finally able to receive the Eucharist for the first time at his initiation Mass seven weeks later than planned, he appreciated the sacrament all the more. Churches reopened for public Masses that weekend, but Bartok opted for virtual Mass at first for safety reasons.

“Virtual Mass is tough. It really made me appreciate being in-person when I went back,” Bartok said. “After being able to receive Communion that first time, and then not being able to, it made me realize all the more how much it means, and how it’s keeping me going.”

Catholic sociologists like McCallion emphasize that the sense of community Bartok experienced through his wife and her family is key for coverts to develop a sense of belonging in the Church.

Now that the pandemic appears to be waning, it’s critical for parishes to hit the ground running at full speed, he said.

“What we need to do now more than ever is ramp up our hospitality and invite people to hang out with us at the parish. We can no longer wait for people; we need to go out and find them,” McCallion said. “Each parish should have staff dedicated to a radical ministry of hospitality based on their own individual community with social events every week, not every month.”

As a mostly Hispanic parish, St. Gabriel Parish in southwest Detroit is home to a close-knit community of Catholics who share both culture and faith. Since January, Fr. Kevin Roelant has noticed an uptick in attendance at Mass, though the numbers are still lower than before the pandemic.

“The greatest community is one of faith,” said Fr. Roelant, pastor of St. Gabriel. “In general, the Hispanic culture sees the importance of coming together. More people have been lingering in the church after Mass to socialize. All people desire that connection with others, and many of them are finding it here.”

In a September 2020 study from the Center for Applied Research in the Apostolate (CARA), 36% of Catholics age 18 to 35 said they planned to attend Mass less frequently when stay-at-home orders were lifted.

Winning those young Catholics back will take more than an invitation, but a true outreach that seeks to reach both head and heart, said Tamra Hull Fromm, Ph.D., director of discipleship and an instructor at the Catholic Biblical School of Michigan.

“When it comes to Mass attendance, we need to ask where people were in terms of their understanding of the sacraments before the pandemic. Do they have an understanding of how the sacraments nourish the faith and, therefore, are part of the routine of nurturing that faith?” Fromm said. “If they don’t understand the Eucharist, why would they come back?”

The digital culture can often make young adults feel disconnected from the sacraments and their parishes, Fromm said. During the church closure, parishes offered Masses, Stations of the Cross and even adoration online, but while these opportunities were necessary, they aren’t a replacement for true communion.

“Adoration on a screen can shift our minds and shift our theology,” Fromm said. “We’re disembodied with digital culture, making it tempting for some to move away from the celebration of the Mass and the importance of the Eucharist.”

A Pew Research Center survey conducted in the summer of 2020 shows that nearly three in 10 Americans report stronger personal faith because of the pandemic, which could explain the continued strong attendance for the young adult Mass at St. Mary. Bible studies at the parish, which began in 2018, continue to grow. Approximately 50-60 participants, divided into men’s and women’s small groups, met on Zoom during the pandemic and are now beginning to gather in person.

Pale believes personal invitations can help bring people back, whether to Mass, a Bible study, or a social event hosted by the church.

For instance, when Pale moved to Royal Oak after graduating from college, a friend invited her to Mass at St. Mary. When Pale attended a second Mass, Fr. Paul Snyder, St. Mary’s pastor, remembered her name and warmly welcomed her back.

“That really made an impact on me, and I think that welcoming spirit is why we’ve seen so many join us,” Pale said. “I think people need to see others like themselves in the church. My own faith became more personal and important to me when I met those living it passionately and authentically. And during (COVID-19), we’re all craving connection with others as we’re all going through it together.”

Fromm and McCallion agree that the need for community for all age groups within the Catholic Church is more important now than ever.

“We are meant for community, and the Church has a wonderful opportunity here to invite people in and not just wonder why they’re not coming back,” Fromm said. “Sometimes people don’t recognize their need for community, and it needs to be stoked. This is a great opportunity for churches to create space for people to come together.”

To find Mass, confession or adoration times near you, visit MassFinder.org.