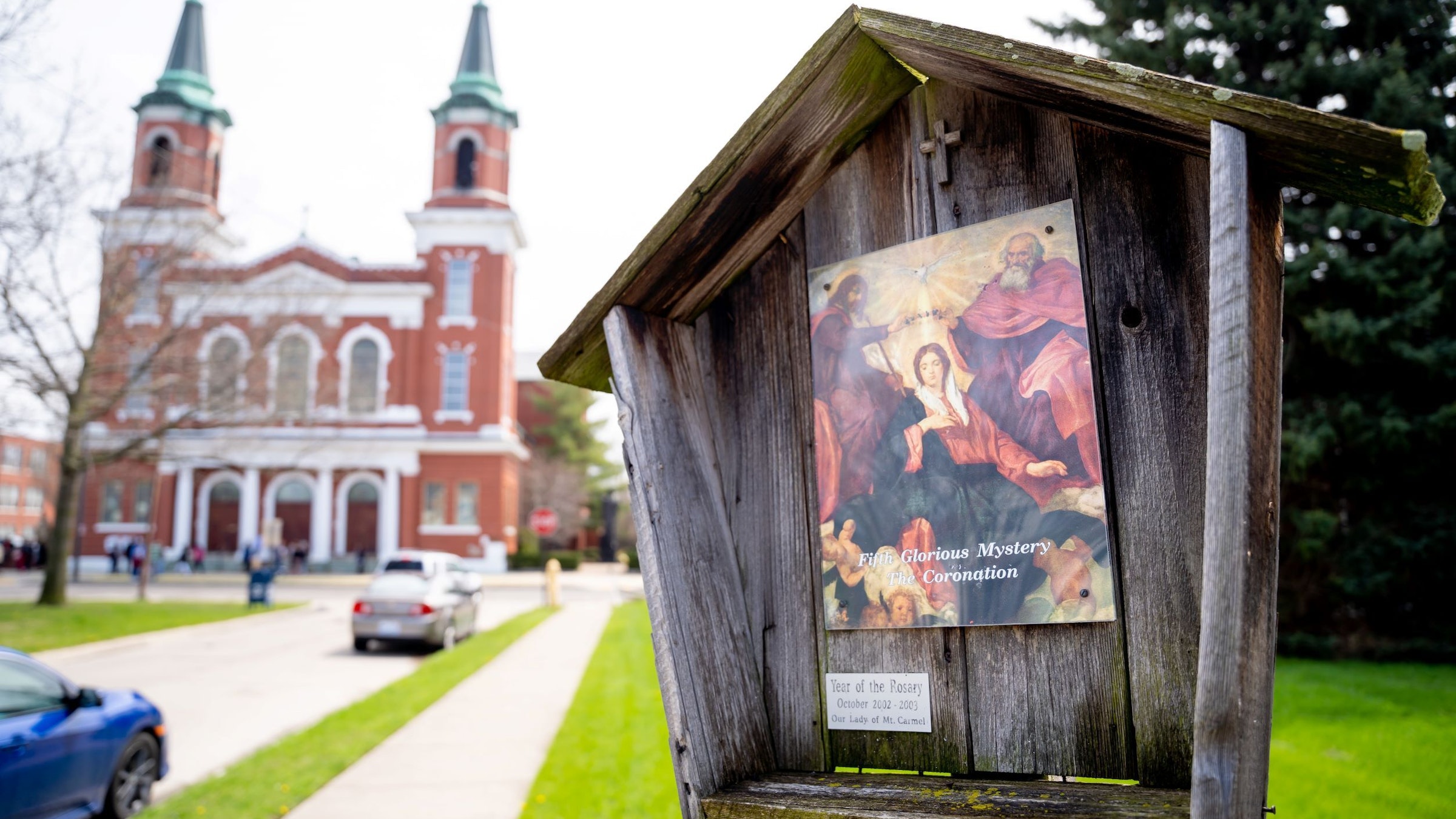 One of 20 neighborhood "rosary box" stations is pictured near Our Lady of the Scapular Parish in Wyandotte. Our Lady of the Scapular parishioners and others host the stations in their front yards, providing a unique walking path through the neighborhood parishioners can use to complete "rosary pilgrimages" through the community. (Photos by Valaurian Waller | Detroit Catholic)

WYANDOTTE — In Wyandotte, the Catholic faith is an integral part of the public square.

That's because parishioners of Our Lady of the Scapular Parish for years have made a point of bringing their faith to the streets — literally — starting with their own front yards.

Throughout the month of May, a month traditionally dedicated to Mary, parishioners are praying the rosary in a unique way, while taking a leisurely Sunday stroll through the neighborhood. During the weekly walks, Our Lady of the Scapular parishioners stop at five "rosary box" stations along the route, praying the ancient prayer in people's front yards. 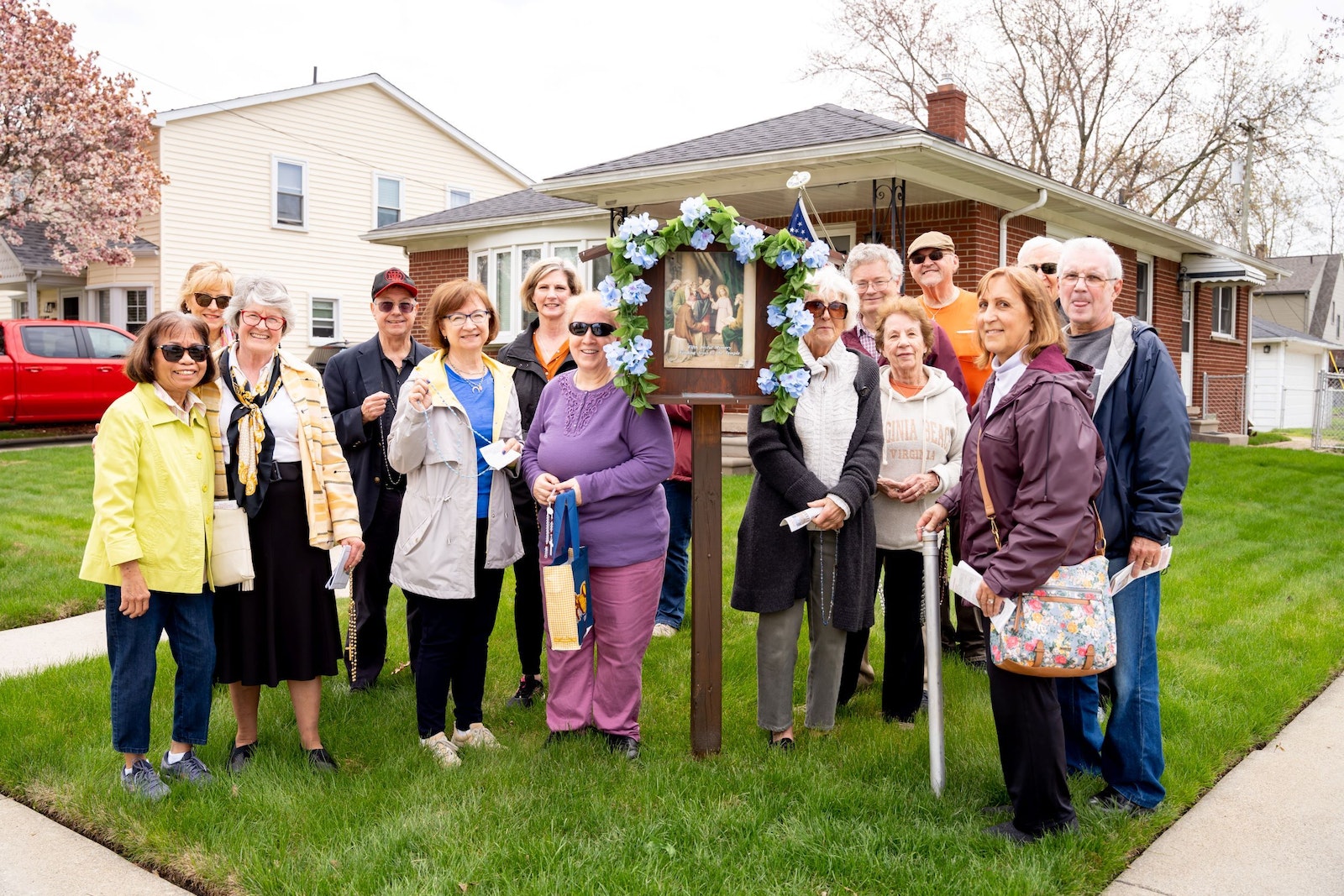 A group of Our Lady of the Scapular parishioners poses in front of one of the "rosary box" stations hosted in a parishioner's front yard along the pilgrimage route. The group is making weekly rosary pilgrimages throughout May.

The rosary boxes each depict a mystery of the rosary and are in the front yards of private homes, giving Wyandotte a unique rosary walk reminiscent of those one might find in Poland, parishioner Debbie Bloomfield said.

“I visited Poland back in 1999 and was inspired by the shrines you’d find in neighborhood and the countryside,” Bloomfield told Detroit Catholic. “We do pro-life walks every spring through Wyandotte. Back when the city had six Catholic churches, we’d walk to five of them and pray a decade of the rosary. While walking, I thought it would be unique to have these stations and do a rosary walk like you see in Europe.”

Bloomfield teamed up with parishioners and the parish Vacation Bible School to build the six-foot-tall wooden boxes, each of which contain an image of the various mysteries of the rosary behind a weatherproof glass. There are 20 such stations in total, most hosted in the yards of current parishioners. 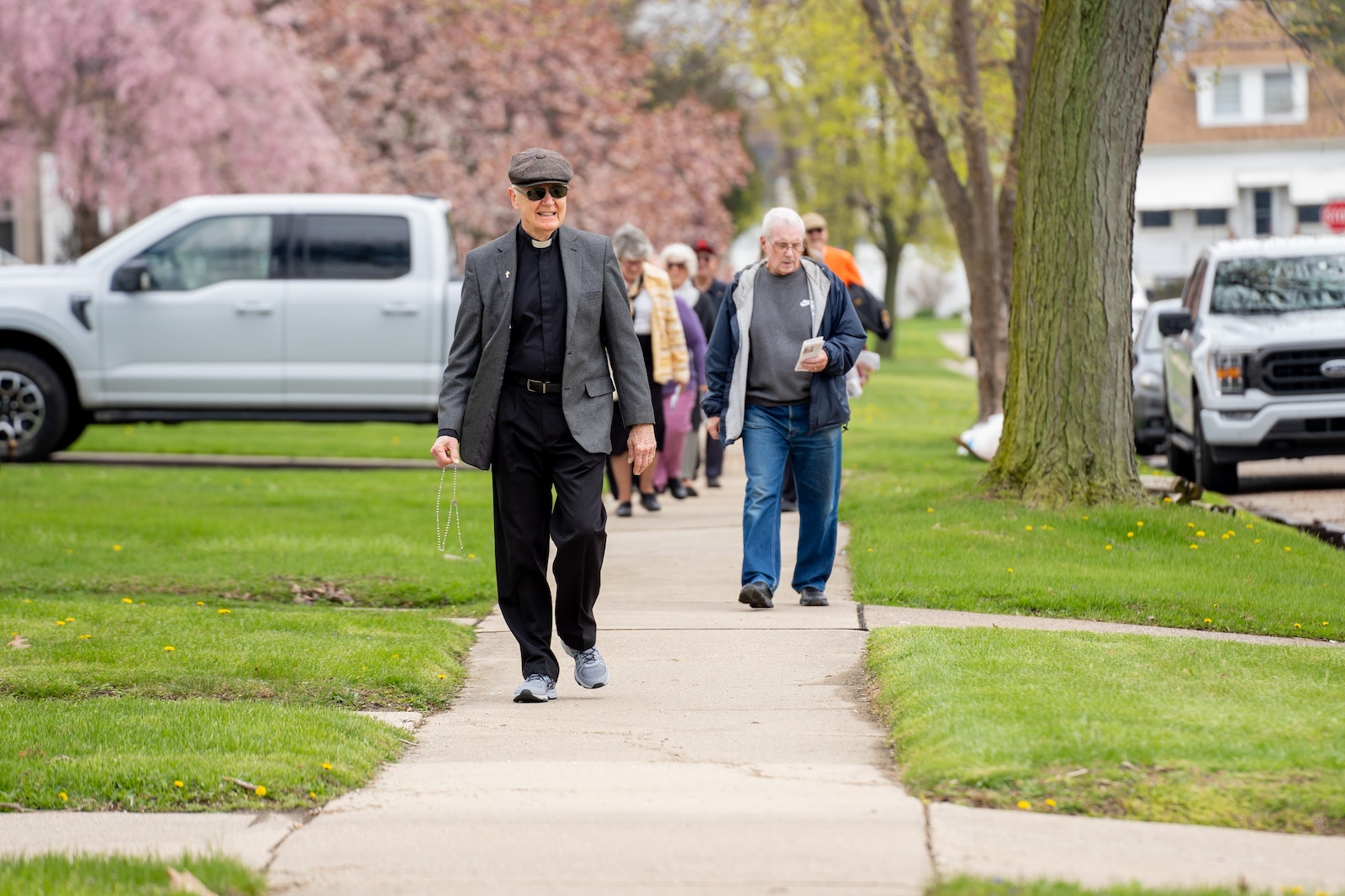 Deacon Richard Bloomfield leads parishioners on stroll along a sidewalk in a Wyandotte neighborhood May 1. "Rosary walks" have been part of the parish community since 2002, when the "rosary boxes" were installed.

Biblical references to the various mysteries are printed on the image to teach passersby about the rosary, along with a small plaque commemorating their installation in October 2002, a year dedicated by Pope St. John Paul II as the Year of the Rosary. The plaques also honor Our Lady of Mount Carmel Church, which now is a part of Our Lady of the Scapular Parish.

“We figured out the route by asking parishioners if they would like to volunteer to host a station,” Bloomfield said. “My husband went out to dig the holes and place the posts. The pictures are protected by plastic to weather-proof the stations, and we have brass screws in the back, so they won’t rust. It took us to October 2003 for us to finish.” 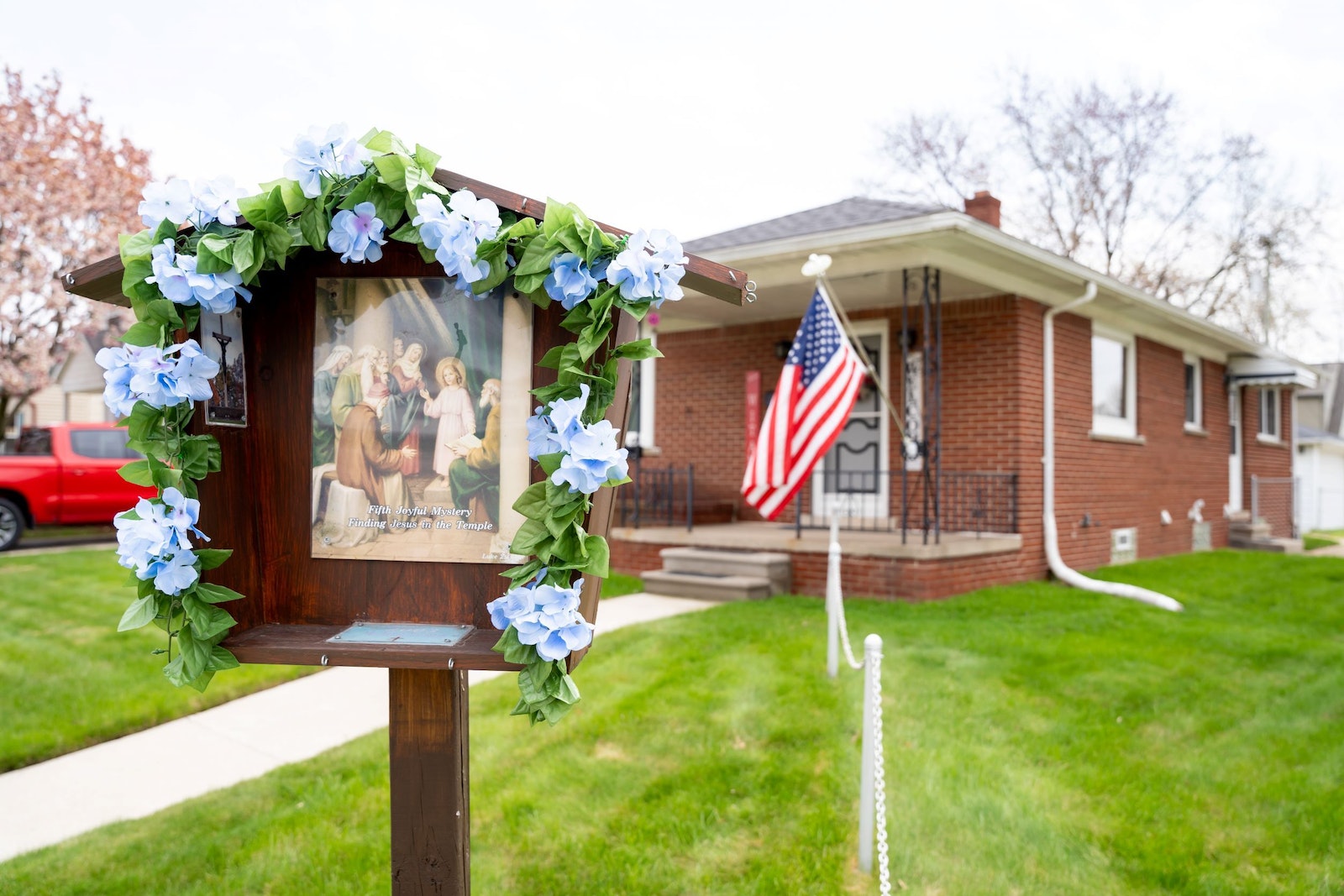 A "rosary box" dedicated to the fifth Joyful Mystery, the finding of Jesus in the temple, is pictured in a parishioner's front yard bedecked with blue flowers.

The 20 stations were placed in front yards to make up the four paths, each about a mile long. A few parishioners have died or moved away from the neighborhood since they were installed, so it has been up to Bloomfield and others to ask the new homeowners if they were OK with having the Catholic devotion in their front yard.

“Some people who have moved in said they didn’t want it, or a real estate agent takes it out before putting the house up for sale, but the stations say 'Our Lady of Mount Carmel, Year of the Rosary,' so they usually call the church,” Bloomfield said. 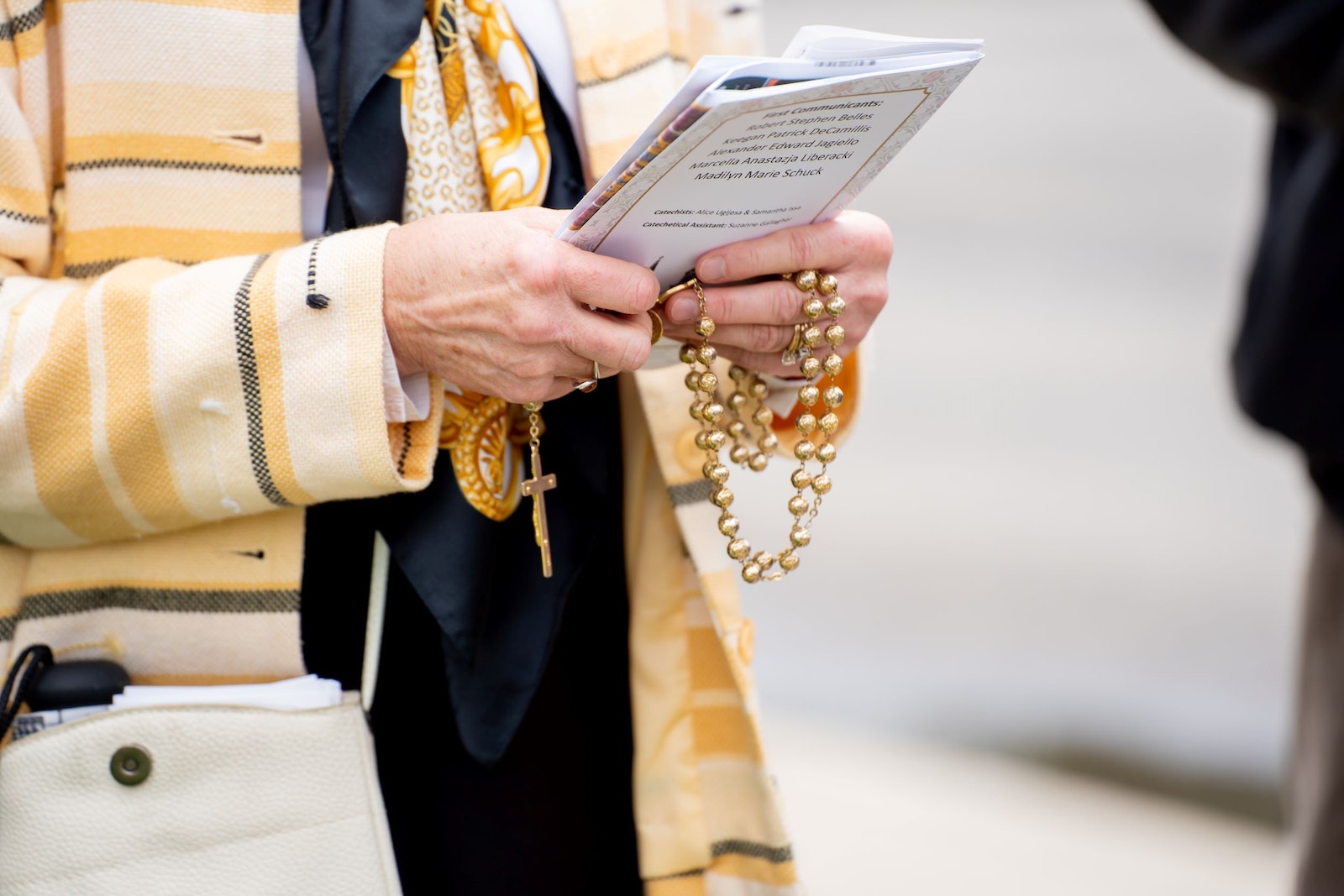 An Our Lady of the Scapular parishioner prays the rosary with fellow pilgrims along the rosary walking route May 1.

“I was talking with a young couple who recently bought a house that had one of the stations,” Bloomfield said. “While talking to them, they said they don’t really go to church, but the husband grew up Catholic, so I tried inviting them to church. I suggested they might move the station next door, but they said to just leave it where it was. It didn’t bother them.”

The path took the group down Vinewood to the home of Barbara and Michael Bozymowski, Our Lady of the Scapular parishioners who hosts the Second Joyful Mystery: “The Visitation.” The Bozymowskis decorated the station with flowers and a blue light, and put out a fresh flower basket to commemorate the first week of May.

The couple didn’t join the rosary walk, but welcomed the pilgrims and prayed with them as Deacon Bloomfield read a reflection after finishing the decade. 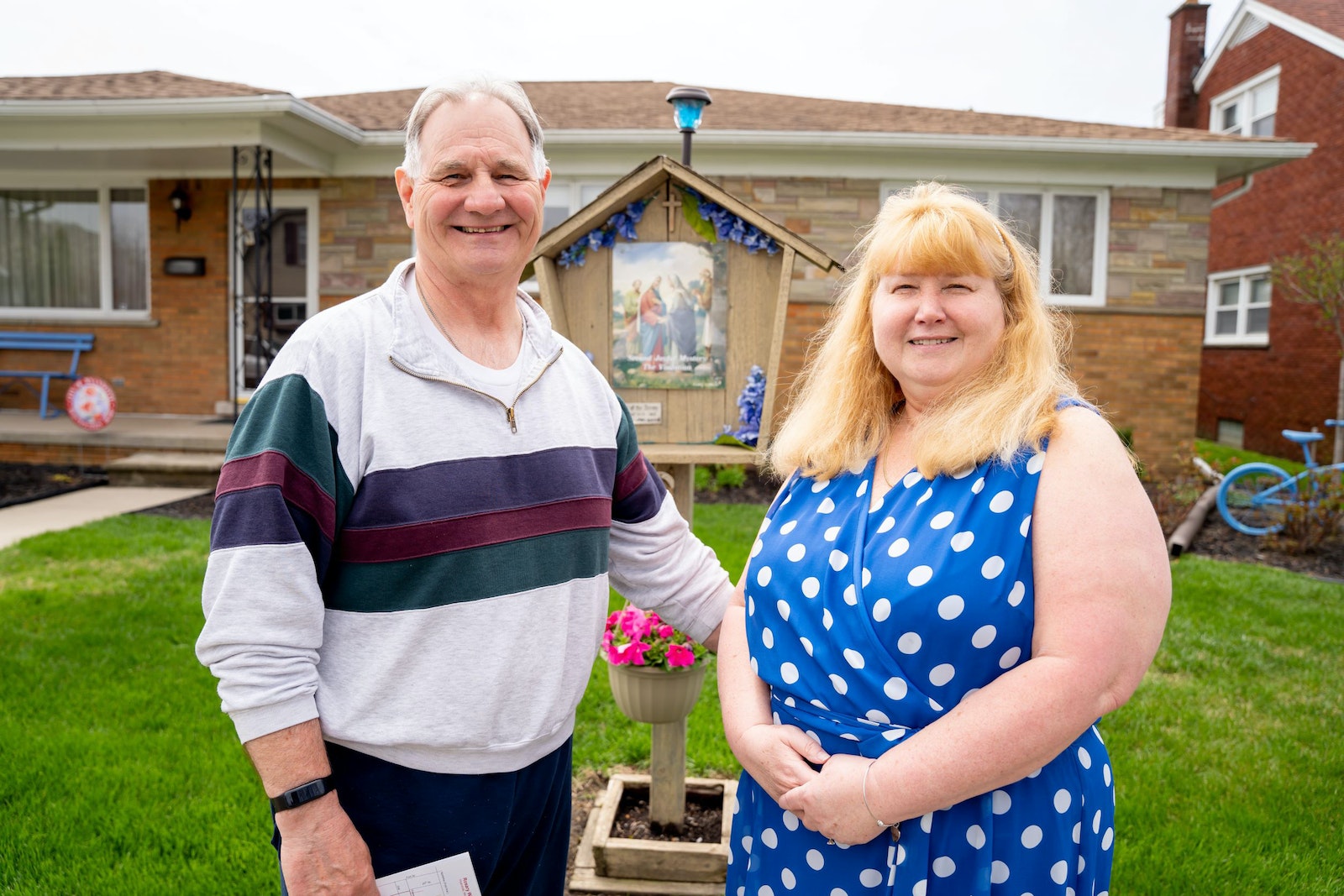 Barbara and Michael Bozymowski, parishioners of Our Lady of the Scapular Parish in Wyandotte, host the second Joyful Mystery rosary station in their front yard. The box was installed when Michael's parents owned the home, and the couple decided to keep it after they took ownership of the house, believing it was a good way to promote their faith in the community.

“We have some more flowers, but it’s a little early in the season,” Michael Bozymowski told Detroit Catholic. “It means a lot being in the neighborhood of the parish and being able to host the second rosary box; I really like it. It’s a Polish tradition that brings back the old country.”

Michael’s parents owned the home when the rosary box was first installed, but after Michael and Barbara took over the home, they wanted to keep it. The box’s presence has sparked conversations about Mary and the rosary with friends and neighbors.

“A few times people have stopped and asked what it was,” Barbara Bozymowski said. “We explained it is one of the decades of the Joyful Mysteries, and they are scattered throughout the whole city; there is a listing at (the parish) where people can check them out.”

Michael added hosting a rosary box is a point of civic pride.

“It shows this is a proud Polish-Catholic neighborhood,” he said.