A look at the Mass Sequences, centering on the Golden Sequence for Pentecost 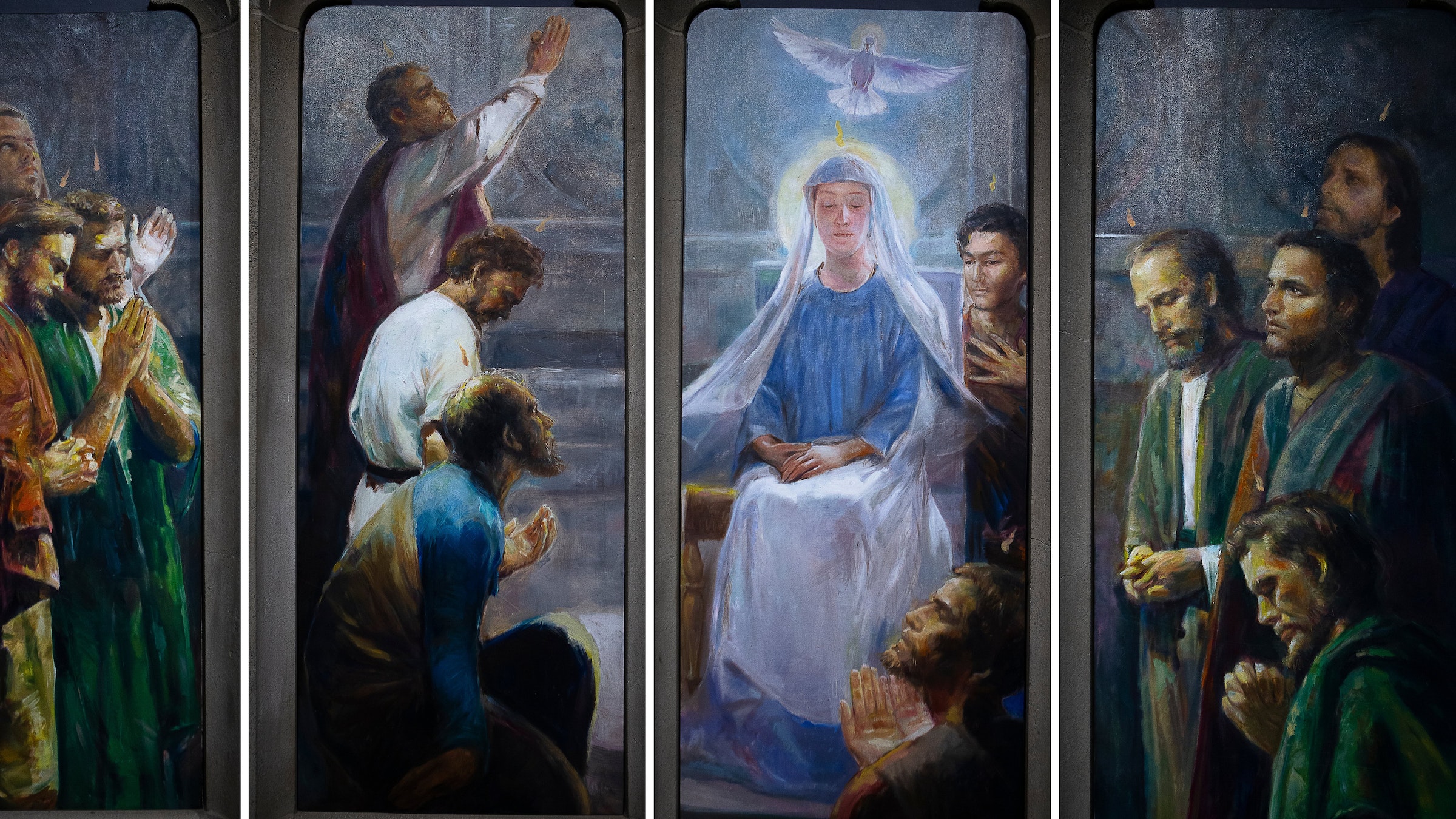 Truly, we are creatures of habit. Used to standing for the Gospel acclamation’s "Alleluias" immediately following the Epistle, congregations at Mass are usually caught by surprise when the Sequence appears instead. Often left without instruction by the lector or cantor, worshippers stand, hesitate, then self-consciously resume their seats.

I once gave a talk at my parish on the priestly postures and gestures in which congregations should be engaging during Mass. The following Pentecost, as the Sequence was about to be sung, I had to smile, overhearing a woman sitting in the pew behind me tell her husband, who had stood up and apparently had given her a nudge to join him, “Look, Sean’s still sitting so I will, too.”

For centuries, a deacon brought the book of the Gospels down the center aisle to the ambo where he proclaimed the Word of God. Ambos are now often plain bookstands on the floor of the sanctuary. But 1,500 years ago, the ambo was a grand structure. Situated on the north wall of a church, midway down the nave, it was often decorated with bas reliefs and mosaics, having seven steps on either side. It was set among the people but raised above them so they could more clearly hear the words of the Gospel — much like a pulpit.

The origin of the Sequence dates to the ninth century. These chants were composed to follow the "Alleluia" verse as the Latin name Sequentia (“Continuing”) explains. The prayer was to extend the "Alleluias," musically accompanying what had become a lengthy Gospel procession. Although few were compulsory, by the early Middle Ages, every Sunday outside Lent and Advent, along with many feast days, had its own Sequence.

Following the massive dogmatic work of the Council of Trent (1545-1563), Pope St. Pius V codified celebration of the ancient rites in 1570. All Sequences were dropped save these four:

Each of these great feast days had their own octaves with the Sequence recited each day.

Pope Pius VII introduced the Seven Sorrows of the Blessed Virgin Mary into the Universal Calendar of the Latin Church in 1814, to be celebrated on the third Sunday in September. Pope St. Pius X, wishing Sundays to retain their own character, moved this feast to Sept. 15 in 1913, the last day of the octave of the Nativity of the Blessed Virgin (Sept. 8). Stabat Mater by Giacopone da Todi was the Sequence for this feast. The verses are also sung between stations during the Way of the Cross devotions on the Fridays of Lent.

These, then, were the only prescribed liturgical Sequences until the mid-20th century. In 1960, Pope St. John XXIII changed the name of the Seven Sorrows of the Blessed Virgin Mary to Our Mother of Sorrows, reduced it from being a feast to a commemoration, its Stabat Mater Sequence dropped.

Further liturgical tinkering followed the Second Vatican Council. The All Souls Day Mass lost the Dies Irae Sequence as did the Requiem Mass, now to be referred to under the unexceptional utilitarian title, “Mass of Christian Burial.”

Minimalists then took aim at Pentecost. This great holy day celebrating the descent of the Holy Spirit so beloved by the medieval Church, was denuded of its octave so there is no continuing celebration as with Christmas and Easter.

The Feast of the Precious Blood (July 1) was suppressed and included in the glorious celebration of Corpus Christi, now given the title the Solemnity of the Most Holy Body and Blood of Christ. It, too, was shorn of its octave, and the supremely eucharistic beauty expressed by Aquinas in the Lauda Sion Sequence was made optional, or can be recited in a truncated version.

Pentecost nears, Whitsunday in England, the celebration so full of tournaments, troubadours and high visions of the Holy Grail in Arthurian legend. Even the roguish outlaw Robin Hood sought to attend Mass and receive “sweet Jesu” in the Most Blessed Sacrament for the sake of Whitsun reverence.

The Pentecost liturgy was gifted with the beautiful Sequence, Veni Sancte Spiritus (“Come Holy Spirit”), a hymn redolent of the great praise and thanksgiving offered to God the Holy Spirit, the most neglected Person of the Most Blessed Trinity. So highly prized is this hymn it is often referred to as the Golden Sequence.

Some scholars have supposed it to be something else written by Robert the Pious. Other authorities suggest its composer to be Pope Innocent III. It is more likely the work of Cardinal Stephen Langton, archbishop of Canterbury, since many of this Sequence’s themes are found within the good cardinal’s sermons.

This Sequence’s beauty and depth have been praised by many. Many Catholic commencement exercises were begun by the school’s choir or glee club singing Veni Sancte Spiritus to the melody written by Samuel Webbe. Fr David Friel, a doctor of liturgical theology, is pleased to state authoritatively:

Veni Sancte Spiritus is a true masterpiece of Latin poetry. In rhyme scheme, it is complex and gorgeous; lines one & two rhyme with each other, and line three always ends in the syllable –ium. In meter, the sequence is a very faithful example of trochaic dimeter. In content, it is a magnificent meditation on the Spirit’s guidance through consolation & desolation. So much is lost when this sequence is not sung in its original Latin.

I would add that Fr. Friel’s detailing of the Sequence does not slight the superlative translation made by Fr. Edward Caswall, a member of St. John Henry Cardinal Newman’s Oratory in Birmingham, England. Many of his original hymns and Latin translations are still sung today.

A quarter century ago I sang my then 6-year-old son DeForeest to sleep with beautiful hymns. His favorite was always Veni Sancte Spiritus. DeForeest enjoyed it in Latin and Caswall’s English translation. One night I mentioned that the Cyber Hymnal (www.hymntime.com) had another translation. DeForeest insisted I sing it and, yep, it had to fit Webbe’s melody.

Fr. Caswall’s translation is, by and large, the official version heard at Mass on Pentecost. Not bothering to maintain the perfection of his efforts, however, the Lectionary’s editors dropped his “Thees” and “Thous” without regard to disturbing the rhyme scheme. Since “Thine” is eliminated the lines read:

O most blessèd Light divine, / Shine within these hearts of yours

The Spirit’s possessive pronoun isn’t even capitalized. Ruining a rhyme simply to appear fashionably current displays mechanical pointlessness. As Oscar Wilde so trenchantly put it, “Consistency is the last refuge of the unimaginative.”

Below is the Sequence itself, in Latin, with Father Caswall’s original English translation.

Consolator optime, (Thou, of comforters the best;)
dulcis hospes animae (Thou, the soul’s most welcome Guest;)
dulce refrigerium. (Sweet refreshment here below;)
In labore requies, (In our labor, rest most sweet;)
in aestu temperies (Grateful coolness in the heat)
in fletu solatium. (Solace in the midst of woe.)

O lux beatissima, (O most blessèd Light divine,)
reple cordis intima (Shine within these hearts of Thine,)
tuorum fidelium. (And our inmost being fill!)
Sine tuo numine, (Where Thou art not, man hath naught,)
nihil est in homine, (Nothing good in deed or thought,)
nihil est innoxium. (Nothing free from taint of ill.)

Da tuis fidelibus, (On the faithful, who adore)
in te confidentibus, (And confess Thee, evermore)
sacrum septenarium. (In Thy sev’nfold gift descend;)
Da virtutis meritum, (Give them virtue’s sure reward)
da salutis exitum, (Give them Thy salvation, Lord;)
da perenne gaudium, (Give them joys that never end.)

Sean M. Wright, MA, an Emmy-nominated television writer, is a Master Catechist for the Archdiocese of Los Angeles. He is also part of the RCIA team at Our Lady of Perpetual Help parish in Santa Clarita, CA. He responds to comments sent him at [email protected].